Thomas Friedman is a well-traveled and widely read columnist for The New York Times and author of six bestselling books, including The World Is Flat. Like that volume, the meaning of the title of his latest one, Thank You for Being Late: An Optimist’s Guide to Thriving in the Age of Accelerations, is hardly self-evident, only being hinted at in the subtitle.

The central thesis of this book is that the three “megatrends” driving global events—technology, globalization, and climate change—are both accelerating and interconnected with one another. This is a “big picture” book in the genre of those of an earlier generation such as Alvin Toffler’s Future Shock and John Naisbitt’s Megatrends.

In reading Friedman’s latest offering I found significant help seeing, in a larger and longer framework, the many swirling events reported on CNN and Fox News in typically episodic and disconnected fashion. The title of the book, by the way, alludes to an incident in Friedman’s recent life. While waiting in a restaurant to meet a friend, he realized that in the increasingly hectic pace of life in Washington, D.C., he actually had a few moments to reflect and think on the events he was covering as an investigative reporter.

Thank You for Being Late should be of interest and value to pastors, teachers, seminary students, missionaries, mission executives, Christians working in business or nonprofit organizations, and anyone looking for a “big picture” perspective on global affairs. In this review I will first highlight a few of Friedman’s key propositions, and then suggest some practical implications for Christian ministry.

Technology, globalization, climate change—or “Moore’s Law, markets, and Mother Nature”—are identified by Friedman as the three most important drivers of global change today and the foreseeable future. “Moore’s Law” is a generalization in computer science that calls attention to the fact that the computing power of computers and microchip-driven devices has been doubling roughly every two years, and shows no signs of letting up. This means the cost of computers and the data they generate has been decreasing, while the speed of computation and availability of such devices has been dramatically increasing.

Friedman sees the year 2007 as something of a “tipping point” in the adoption and influence of computer and information technologies. Since that time, the rapid emergence of smartphones and the businesses, services, and social media that have leveraged these capabilities (e.g., Amazon, Google , Facebook, Twitter, Uber, Airbnb) have begun to fundamentally affect how many of us do business and relate to one another. 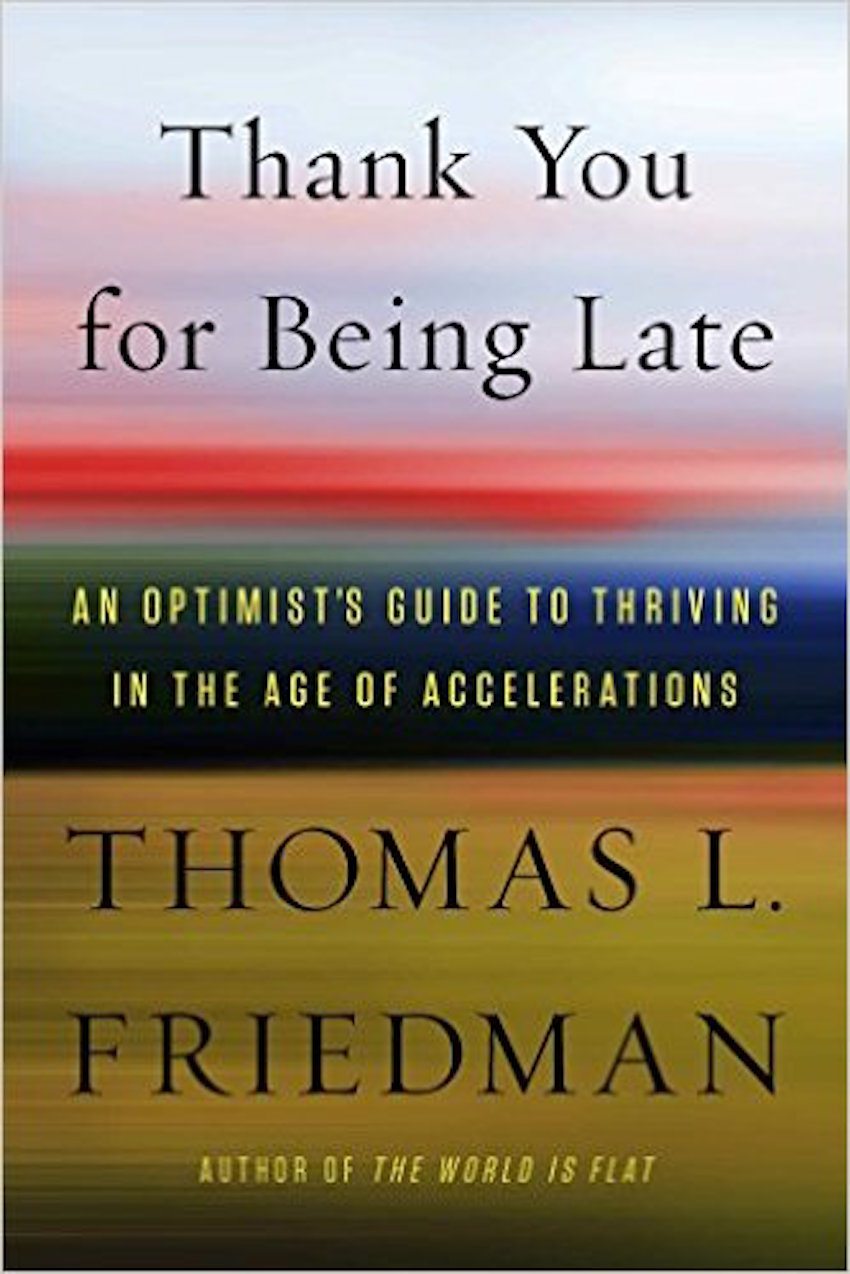 Thank You for Being Late: an Optimist's Guide to Thriving in the Age of Accelerations

Thank You for Being Late: an Optimist's Guide to Thriving in the Age of Accelerations

It isn’t merely the increase in computing power per se that is challenging and disrupting institutions and traditional ways of doing things. The emergence of artificial intelligence technologies, robotics, nanotechnologies, revolutionary gene-editing techniques (such as CRISPR), and software platforms (such as GitHub) that partially automate the writing of software are taking the computer and information revolution to entirely new levels of power, sophistication, and complexity. The velocity of technological change is increasing and isn’t likely to abate in the foreseeable future, and organizations—including churches and Christian ministries—that seek to survive and thrive in this new dynamic environment must be nimble and resilient.

Globalization, the second major driver, is a familiar concept to most people today. Friedman, however, makes the valuable observation that globalization isn’t merely an economic matter involving the interlocking networks of trade and commerce around the world; it also involves global information flows facilitated by social media, the rapid effect of crises in one part of the globe on other nations, the massive growth in world tourism that increases cross-cultural exposures across national boundaries, and the almost universal spread of notions such as human rights as moral and legal ideals. Globalization involves, then, not merely economic interdependencies, but increasing intercultural awareness—and, not infrequently, intercultural conflicts.

Climate change is identified by Friedman as a third major driver of global events. Desertification and droughts in West African nations such as Niger in recent years has produced a massive stream of refugees seeking to migrate in search of work, funneling themselves through Libya and trying to enter Europe. Similarly, long periods of drought in Syria helped to destabilize the Assad regime and were significant contributing causes to the present catastrophe of the Syrian civil war and refugee crisis.

Opportunity for the Church

What might be some of the “takeaways” or practical implications of Friedman’s analysis for Christian ministries? His vision of a world of accelerating change might recall the apostle Paul’s warning that as the end of history approaches “there will be times of stress” (2 Tim. 3:1). But “times of stress” can also be times of opportunity.

Significantly, Friedman himself, in suggesting responses to his own analysis, concludes that perhaps the greatest need of the future will be for leaders to “anchor people in strong families and healthy communities” where people feel “protected, respected, and connected” (357, 359). Indeed, this sounds almost like a plea for churches and other faith-based organizations to “step up to the plate” to provide “thick communities” that can anchor people in a world of accelerating and disorienting change.

A mandate for local churches in such a world might be summarized as a commitment to and embodiment of “creed, character, and community” (or kerygma, didache, and koinonia)—a commitment to the unchanging truth of the gospel, expressed in expository Bible teaching and preaching; to the formation of deeply committed disciples who actually obey all Jesus commanded (Matt. 28:20); and to the cultivation of “deep churches” where the presence of God is experienced and believers respond to Jesus’s call for his disciples to embody caring, helpful, and attentive relationships with one another (John 13:34–35).

So, can we as Christian communities be a significant part of an answer to Friedman’s plea for “anchoring people in strong families and healthy communities”?