Once upon a time, a little boy got lost. He slipped between the pages of a book and wandered across the Dark of Sea of Darkness, with a sword in his hand, battling the Nameless Evil Whose Name Was Gnag. His mother, who had promised that she would always look for him, called for him upstairs and outside. He couldn’t hear her because his ears were full of dragon song and the howling of gray fangs, and—more immediately—they were covered by a giant blanket. The mother stood in her living room, holding a cup of tea, and wondering what had become of her boy, when suddenly the pile of blankets on the sofa right next to her gave a loud whoop of victory. The mother wiped up her spilled tea and dug through the blankets until a little boy emerged. My son was 9 and mostly finished with the last book of The Wingfeather Saga. He gave me a quick hug and plunged back into the story.

The Wingfeather Saga is a four-book series by singer-songwriter Andrew Peterson that tells the story of a family living in a land governed by venomous giant lizard men, the Fangs of Dang, who terrorize the citizenry in ways both outrageous (stealing local children) and banal (demanding paperwork for permission to shovel). The family’s three children discover they have a deep history behind them and destiny ahead of them, both of which could change their whole land and drive the Fangs out for good—if they can overcome the fangishness poisoning their own hearts.

All four books are being re-released this year in hardcover format. They’ll have new cover illustrations by Nicholas Kole, the production designer of the animated pilot film of The Wingfeather Saga, along with new internal illustrations by Joe Sutphin, who did the original pictures in the final book. The first two, On the Edge of the Dark Sea of Darkness and North! Or Be Eaten, will be released on March 10, and the second two will be available September 15. 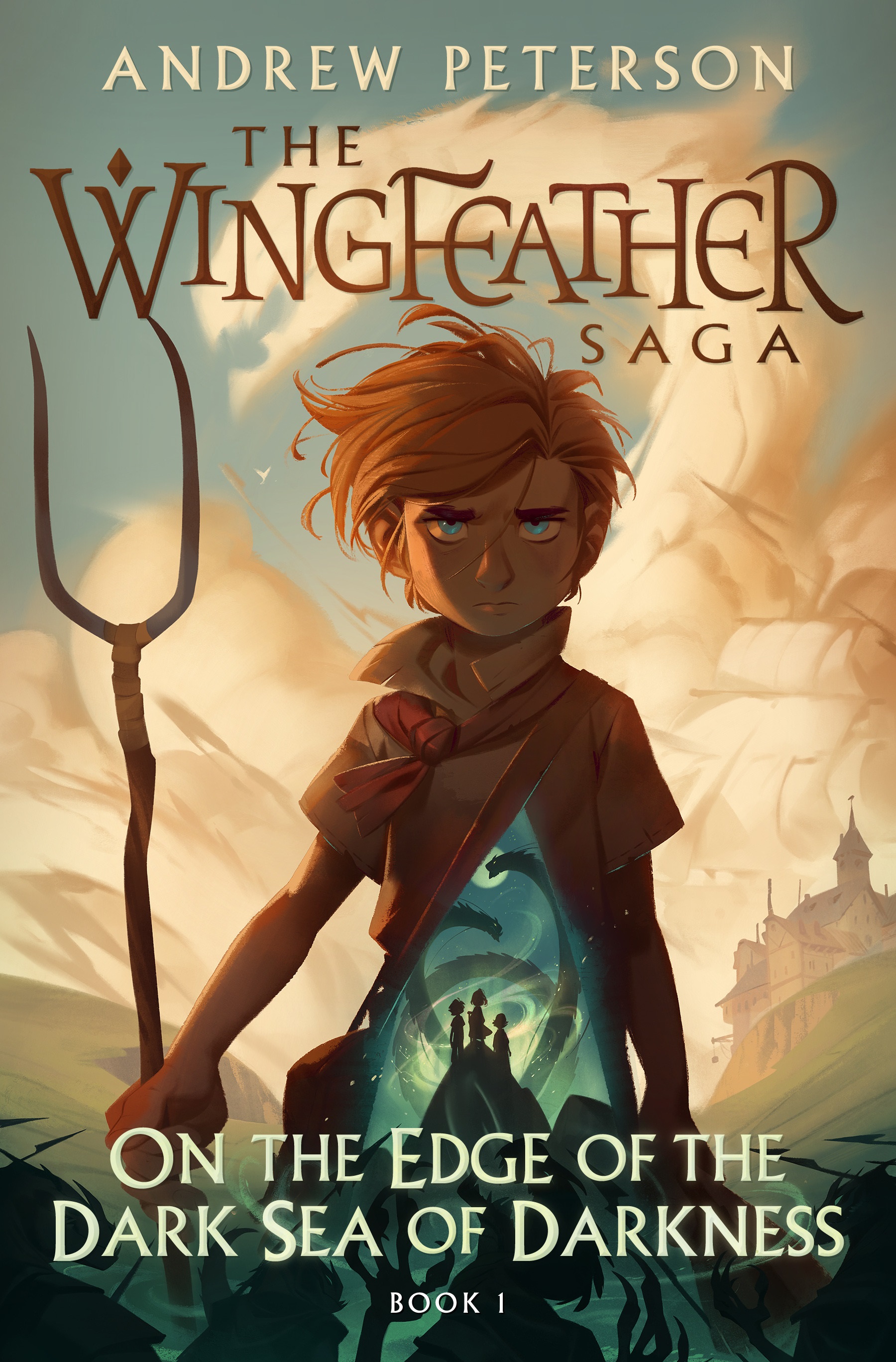 On the Edge of the Dark Sea of Darkness

On the Edge of the Dark Sea of Darkness

Full of characters rich in heart, smarts, and courage, On the Edge of the Dark Sea of Darkness is a tale children of all ages will cherish, families can read aloud, and readers’ groups are sure to enjoy discussing for its many layers of meaning. Extra features include new interior illustrations from Joe Sutphin, funny footnotes, a map of the fantastical world, inventive appendices, and fanciful line art in the tradition of the original Frank L. Baum Wizard of Oz storybooks.

Our family first discovered the Wingfeather books a decade ago through Peterson’s music. Friends gave us his album Counting Stars, and we fell in love. We looked up the singer on Amazon to see if he had other albums (he does). We were surprised to discover he was writing this series of middle-grade fantasy novels.

The first book reads like a bedtime story, a little scary and silly, with a black carriage that hauls small children off to doom in the middle of the night and non sequitur footnotes scattered throughout. The series matures in content and style as it develops; the final book, The Warden and the Wolf King, won WORLD magazine’s Children’s Book of the Year (2014). Some of the writing is heartbreakingly beautiful, especially because all the books are infused with a profound sense of longing. The characters are at their best when they’re full of hope for something better than their current circumstances—for the Shining Isle of Anniera, for freedom from the Fangs, from their own malformed bodies and hearts, even for death to lose its sting.

True fantasies fill us with longing for a world beyond our own, where death is defeated and wrongs made right.

That longing and hope, which both grounds and also lifts Peterson’s music and books, makes for good art. More than that, they also give us hope, here and now, for something better than our own fallen world. In his essay “On Fairy-Stories,” J. R. R. Tolkien explains that fantasy stories—even those set in imaginary worlds populated by toothy cows and singing dragons—are much truer than works of clear-eyed but cynical “realism.” True fantasies fill us with longing for a world beyond our own, where death is defeated and wrongs made right. Happy endings, especially the kind wrought by sudden and unexpected magic (a “eucatastrophe,” as Tolkien calls it), remind us that we’re living a story that can be difficult and dark, but in the midst of it, in the darkest hour, Christ arrives like a miracle to rescue us, redeem our journey, and save us from certain death. These kinds of stories remind us that we need saving, that we can’t save ourselves, that there is still hope.

The Wingfeather Saga is populated with characters that act and think a lot like we do. Their battles against the evils around and within, their hunger for a better home, are vivid reminders that this world isn’t our home, either, and that a better world awaits.

Peterson’s characters face numerous opportunities to experience courage or selflessness or grace, mostly amid running for their lives but also in struggling through tedious lessons or chores or dealing with the other fallen characters around them. Watching Janner Igiby incarnate right (or wrong) decisions amid his story makes it seem possible that we could make the same decisions amid our own stories.

We need stories like this to inspire us and to incarnate abstract truths in ways that speak to both our heads and our hearts.

In the second book, North! Or Be Eaten, aspects of the story of Janner and his brother Tink calls to mind Tim Keller’s The Prodigal God. It’s moving to watch the characters live out how the younger brother’s rebellion and older brother’s pride equally require redemption. In The Abolition of Man, C. S. Lewis says we need stories like this to inspire us and incarnate abstract truths in ways that speak to both our heads and our hearts—“the indispensable liaison officers between cerebral man and visceral man.” Seeing truths embodied through characters in stories persuades us of their truth at the deepest level of our being.

Stories Point Us to the Word

Such embodiment is important for everyone, but particularly powerful for children. 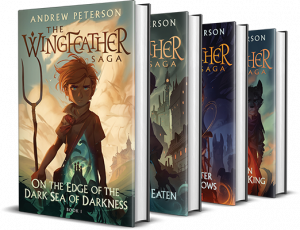 Since our younger children have recently gotten old enough to sit still, I’ve been reading the Wingfeather books aloud to them. The stories are too scary for my 4-year-old daughter. Even though she’s utterly intrigued by the story and characters, I’ve skipped over a good bit of blood and bones. There are lots of monsters, like dragons, toothy cows, traitors, and people who use too many exclamation points. Children are frequently imperiled by enemies and by claustrophobia-inducing coffin-boxes (don’t say I didn’t warn you) and by their own selfish decisions. I’m not sure if the smallest child will make it through the whole series, because I don’t know how she’ll handle the bits where characters we love don’t all make it through the danger okay.

My kids need to know—in their heads and their hearts—that even when they mess up in their own pride or rebellion, even if the enemy feels too strong, even if it feels impossible for all things to be made new, in Christ, they’re new creations.

I’m hoping to hang on, though, because there’s a bit coming up in North! Or Be Eaten that I want my kids to hear. The scene echoes the moment in C. S. Lewis’s The Great Divorce where God transforms a shameful hindrance into a powerful vehicle to carry his now-freed son “like a shooting star” deeper into God’s kingdom. It’s to Peterson’s credit that the Wingfeather books mine similar gold, and I want my kids to see that treasure.

My kids need to know—in their heads and their hearts—that even when they mess up in their pride or rebellion, even when the enemy feels too strong, even when it feels impossible for all things to be made new, that through faith in Christ they’re new creations. They need to see that the astonishing miracle of redemption is that God can and does use even hard things, wrong things—like Fangs of Dang, or a Roman cross—to give them wings to bring them to himself. Peterson tells that story, through a character with literal wings, and he tells it well.

We have the privilege of living in a time when contemporary authors are creating quality fantasy stories that are funny and inspiring and that say true things. Adults and children need Jonathan Rogers’s feechie folk, S. D. Smith’s rabbits with swords, Jonathan Auxier’s courageous chimney sweeps, Andrew Peterson’s brave and flawed Wingfeather children, and others to incarnate truths for us. Battling the forces of evil and experiencing a “eucatastrophe,” a moment of redemption, with a character in a story gives us a glimpse of what it’s like to know goodness and love truth.

Seeing the ends of their stories gives us courage to face the end of this chapter of ours. Despite the darkness in the world around us, as Christians we’re in fact living a sort of fairy tale with an improbable rescue and a happy ending that feels too good to be true. But it isn’t. Tolkien says that in Christ’s death and resurrection, “legend and history have met and fused.” Lewis says the “myth became fact.” The apostle says, “The Word became flesh and made his dwelling among us” (John 1:14).

So when my little boy got lost and found in The Wingfeather Saga, he was reading a fairy tale, but he was also experiencing through art and characters what it’s like to be lost and in need of a miracle. He was learning, even without fully realizing it, that through sacrifice and love the True Hero seeks and saves the lost.