Few writers can capture the spirit of a society in a single paragraph. Even fewer can do it in ways that remain painfully insightful 200 years later. That is what makes Alexis de Tocqueville’s comment on the United States in the 1830s so striking:

It is a strange thing to see with what sort of feverish ardour Americans pursue well-being and how they show themselves constantly tormented by a vague fear of not having chosen the shortest route that can lead to it. The inhabitant of the United States attaches himself to the goods of this world as if he were assured of not dying, and he rushes so precipitately to grasp those that pass within his reach that one would say he fears at each instant he will cease to live before he has enjoyed them. He grasps them all but without clutching them, and he soon allows them to escape from his hands so as to run after new enjoyments. . . . Death finally comes, and it stops him before he has grown weary of this useless pursuit of a complete felicity that always flees from him. (511–14)

The restlessness of Americans fascinated Tocqueville. This vast continent of abundance, in which virtually everyone seemed to be middle class, was nevertheless characterized by a feverish, impatient, anxious, tormented, and grasping spirit. It was as if consumption did not actually bring contentment, as many confidently assumed that it would, and riches did not bring rest. Two centuries on, Tocqueville’s diagnosis still applies—and not just in America, but throughout the Western world.

That observation is at the heart of Benjamin Storey and Jenna Silber Storey’s wonderful new book, Why We Are Restless: On the Modern Quest for Contentment. It’s a remarkable piece of apologetics, not least because the authors never quite put their apologetic (or even Christian) cards on the table. Beautifully written and carefully argued, it’s as searching as it is subtle. 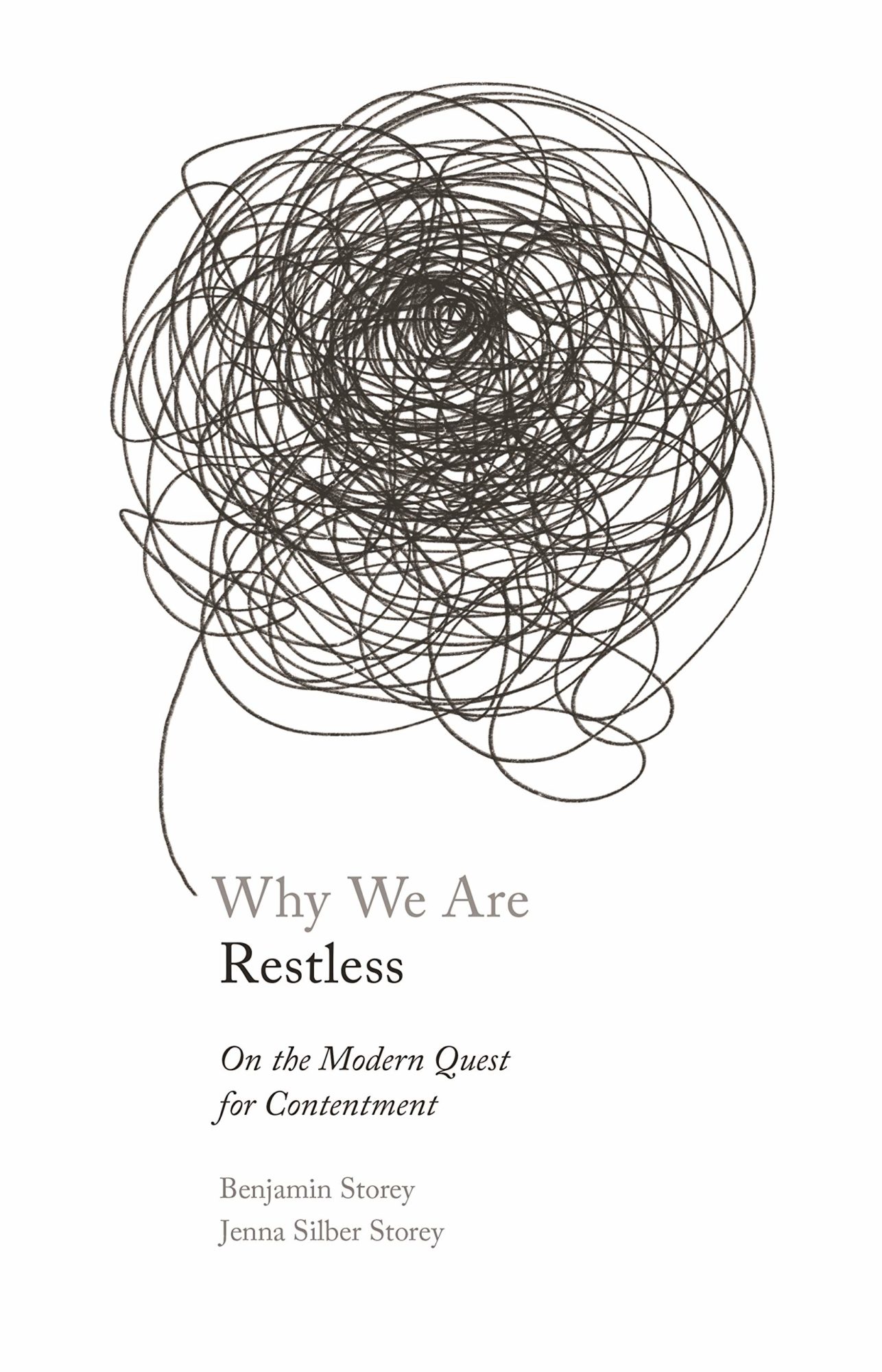 Why We Are Restless: On the Modern Quest for Contentment

Why We Are Restless: On the Modern Quest for Contentment

We live in an age of unprecedented prosperity, yet everywhere we see signs that our pursuit of happiness has proven fruitless. Dissatisfied, we seek change for the sake of change―even if it means undermining the foundations of our common life. In Why We Are Restless, Benjamin and Jenna Storey offer a profound and beautiful reflection on the roots of this malaise and examine how we might begin to cure ourselves.

Drawing on the insights of Montaigne, Pascal, Rousseau, and Tocqueville, Why We Are Restless explores the modern vision of happiness that leads us on, and the disquiet that follows it like a lengthening shadow. In the sixteenth century, Montaigne articulated an original vision of human life that inspired people to see themselves as individuals dedicated to seeking contentment in the here and now, but Pascal argued that we cannot find happiness through pleasant self-seeking, only anguished God-seeking. Rousseau later tried and failed to rescue Montaigne’s worldliness from Pascal’s attack. Steeped in these debates, Tocqueville visited the United States in 1831 and, observing a people “restless in the midst of their well-being,” discovered what happens when an entire nation seeks worldly contentment―and finds mostly discontent.

Arguing that the philosophy we have inherited, despite pretending to let us live as we please, produces remarkably homogenous and unhappy lives, Why We Are Restless makes the case that finding true contentment requires rethinking our most basic assumptions about happiness.

Using the work of four French writers—Montaigne (16th century), Pascal (17th), Rousseau (18th), and Tocqueville (19th)—the Storeys (both professors at Furman University) examine the ways in which human beings try to find rest and happiness and why so many of them end in failure.

Restlessness, the Storeys argue, pervades American life. You can see it everywhere: “in our love for the screen, with its diversions and distractions; in our demand for endless variety in what we eat, drink and wear; in our appetite for mind-altering substances, from pot to Prozac to Pinot Grigio; in our fascination with crises in almost every area of human life” (x–xi). Curiously, they note, restlessness seems to increase with privilege rather than the reverse. The modern middle class, as Tocqueville put it, is “restless in the midst of their well-being.”

But why? Where does this sense of peaceless unease come from? And what can be done about it?

Where does this sense of peaceless unease come from? And what can be done about it?

For Michel de Montaigne (1533–92), our problem is simply that we’re too concerned with what lies beyond ourselves. Rather than searching for meaning outside of our natural lives—in religion, virtue, honor, knowledge, or whatever—we need to learn instead to practice immanent contentment. The key to happiness lies in simply being at home in oneself and the world: it’s the pursuit of “mere life, life for its own sake, life without the orienting norms of philosophy, politics or faith” (22). Today we might describe it using language like “being present” or “mindfulness.” Happiness is here, not in a world beyond, and we can find it by practicing the right way of life, “oriented by the quest for immanent contentment, for psychic equilibrium in our inner lives and unmediated approbation in our social lives” (48).

To which Blaise Pascal (1623–62), in a nutshell, says: bunk. For Pascal, Montaigne has dramatically understated the problem. He’s accepted trivial and fleeting pleasures as a substitute for real joy, which gets us nowhere, and his proposal is essentially naive. Human beings don’t want platitudes and deflection and a smattering of diversions to keep us distracted; we want truth, and justice, and love, and eternity, and ultimately God.

But we are ignorant, finite, and destined for death. And that means that without the grace of God we’ll be miserable: “Our consciousness of our own mortality and our awareness of our own ignorance make us unhappy. . . . No psychic equilibrium is possible for a being whose desires so radically outstrip his possibilities. Misery follows ineluctably from an honest estimate of the gap between what we want and what we are” (66). We have a deeper problem than Montaigne admits, and we need a deeper solution. Thus Pascal, though he seems more pessimistic than Montaigne, actually seeks a far richer sort of joy and refuses to settle for anything less. This joy, he concludes, can only be found in Christ.

[Pascal] seeks a far richer sort of joy and refuses to settle for anything less. This joy, he concludes, can only be found in Christ.

But there are lessons to learn from his failures. “Rousseau is like a chemist in a laboratory whose daring combinations of elements have blown up in his face: the experiment kills its author but leaves a telling residue in his beakers” (139). It’s a tragic but instructive legacy. “The modern quest for immanent contentment is destined to leave us as restless as ever, no matter how wholeheartedly we give ourselves to it” (139).

Which takes us back to Tocqueville (1805–59) and his analysis of American restlessness. Tocqueville, like Pascal, suspects that a turbulent unease lies beneath all the Montaignesque talk of prosperity—to say nothing of equality, liberty, and the pursuit of happiness—and the greater the prosperity, the greater the restlessness. His writings are an attempt to teach Americans “the Pascalian lesson that the goods that are their treasure, the justice that is their pride, and the happiness that is their aim can never be enough for a human soul” (144).

It’s a tough sell. Americans, like the modern West in general, are inclined to see the world in immanent, material terms, which makes it harder to believe in the soul and harder to ask deep questions about meaning, spirituality, and transcendence. But that’s exactly the problem. “Without self-knowledge to guide it, the quest for the good life becomes a slapdash sequence of locations, vocations and vacations” (163).

Why We Are Restless is a book of exposition, not exhortation. There are no next steps, no knockdown arguments, and no points of application. It does a magnificent job of summarizing four hugely important thinkers with impressive clarity, wit, and brevity and raises some profound questions about the modern quest for happiness in the process. But it’s not a practical guide for how to respond. As such, it’s only fair to say that it wouldn’t be everybody’s cup of tea.

In my view, however, the Storeys have put their finger on something of tremendous significance for evangelism and apologetics in the post-Christian West. In a flat world, where transcendence has been lost and everything is immanent, restlessness is inevitable. As they explain,

Pascal reveals the misery that haunts the quest for immanent contentment like a shadow. That misery—carefully hidden but constantly revealed in the love of diversion so characteristic of modern men and women—is the enduring sign of the mismatch between the kind of happiness we pursue and the kind of beings we are. (178, emphasis added)

But that, of course, presents a powerful opportunity for anyone who is Augustinian enough to see it: “For you made us for yourself, O Lord, and our hearts are restless until they find their rest in you.”