The new emphasis on confessionalism among evangelical Protestants is a welcome one. Evangelicalism has long needed to engage in what Timothy George has called “renewal through retrieval.” But there seems to be an unintended side effect of the retrieval of our respective confessional traditions: a sort of tribalism that’s driving us into our confessional ghettos and keeping us from being able to accomplish together what we never could apart.

That’s why I was delighted when The Gospel Coalition asked me to review Fred Sanders’s book, Wesley on the Christian Life: The Heart Renewed in Love, and more delighted that Crossway Books has published it. The publication of this book (and author) by a broadly Reformed publishing house, and the consideration of it on a broadly Reformed website, is a hopeful sign for the future of confessional evangelicalism.

Indeed, this is the spirit Sanders discusses when he describes Wesley’s “catholic spirit” in chapter 9, a spirit that allowed Wesley and Calvinists like George Whitefield and Charles Simeon to come together for the gospel. Sanders provides some quotations from ardent Calvinists who have remarkable things to say about Wesley. Sanders tells the story of a follower of Whitefield who asked him, “Will we see John Wesley in heaven?” Whitefield said, “I fear not. He will be so near the throne, and we shall be at such a distance, that we shall hardly get a sight of him” (239).

This is the spirit of unity that fueled the great transatlantic spiritual awakenings of the 18th century. I’m hopeful we can recapture that spirit today. It’s the spirit that led John Newton to say of Wesley, “I know of no one to whom I owe more as an instrument of divine grace” (14). It’s the spirit that led Charles Spurgeon to say, despite Wesley’s theological errors: “It will be time for us to find fault with John and Charles Wesley, not when we discover their mistakes, but when we have cured our own. When we shall have more piety than they, more fire, more grace, more burning love, more intense unselfishness, then, and not till then, may we begin to find fault and criticize.” The Prince of Preachers continued, “For my part, I am as one who can see the spots in the sun, but know it to be the sun still, and only weep for my farthing candle by the side of such a luminary” (240).

This is the ideal Wesley book for Calvinists and other non-Wesleyans to read. As a non-Wesleyan Arminian who has sometimes been at great pains to distance myself from Wesleyan soteriology, I gained renewed appreciation of the man and his ministry after reading this work. It presents a nuanced portrait of one who was once hailed by Calvinists as a great hero of the faith but who has now come to be largely ignored by many non-Wesleyan evangelicals. This is a scholarly and skillfully researched and written book, yet it is accessible to a general readership. It is a must-read for all evangelicals—not just Wesleyans—who long for the renewal of evangelical Protestant Christianity. 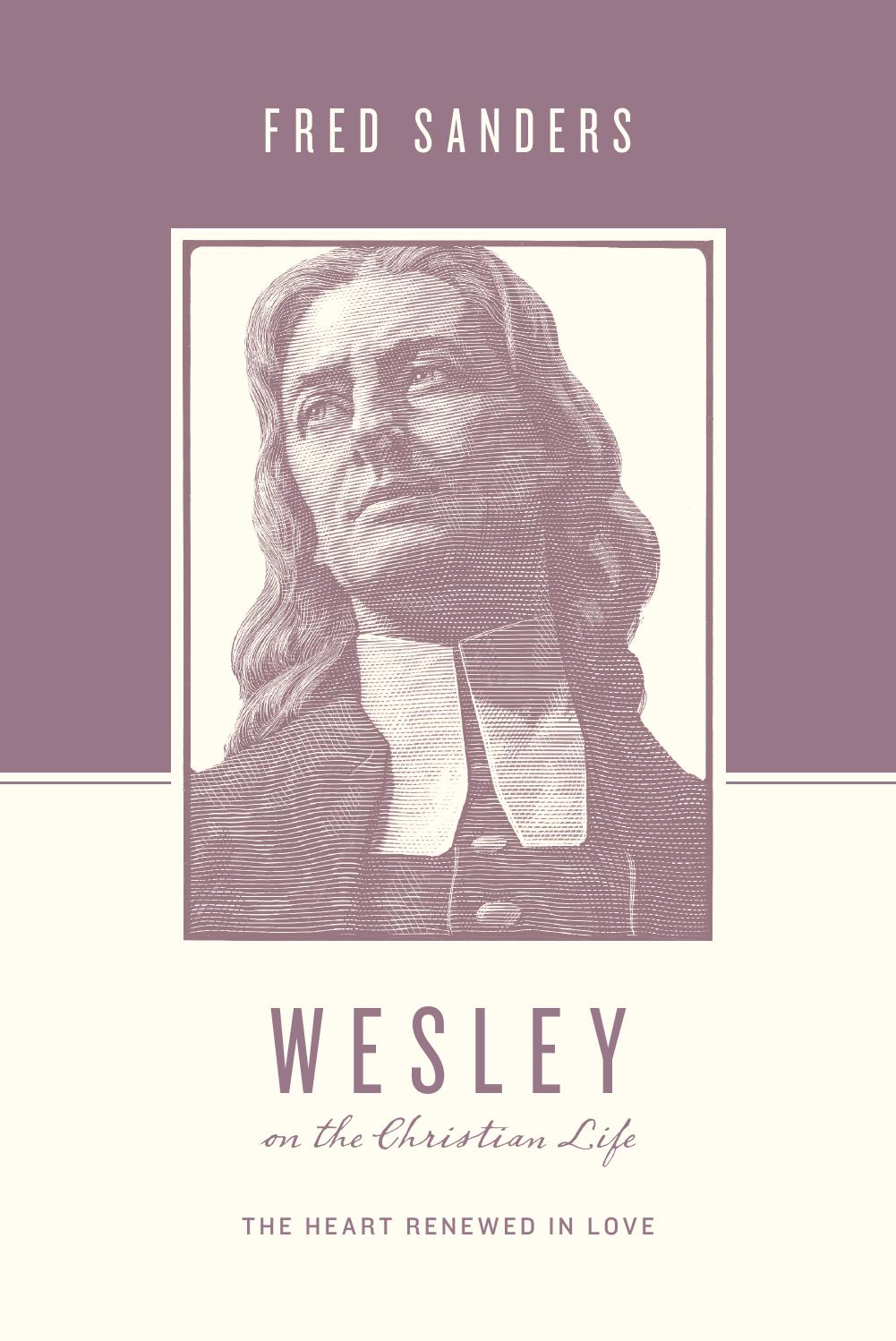 Wesley on the Christian Life: The Heart Renewed in Love

Wesley on the Christian Life: The Heart Renewed in Love

After discussing Wesley’s aptitude as a spiritual guide for modern evangelicals of all confessional stripes, and giving a brief biography of him (while frequently referring to his brother, the great hymn writer Charles Wesley), Sanders goes on to give a sympathetic yet careful sketch of Wesley’s spirituality and its theological underpinnings. He describes Wesley in chapter 3 as a theologian of the heart. Sanders, associate professor of theology at the Torrey Honors Institute of Biola University, then discusses Wesley as “The Theologian of 1 John” (ch. 4), followed by a discussion of key doctrines of Wesley’s such as justification by faith, law and grace, the means of grace, and Christian perfection (chs. 5-8). Chapters on Wesley’s “catholic spirit” and trinitarian theology (chs. 9-10) conclude the book.

The average evangelical reader will find much here that’s familiar. He or she will read of the life of one of God’s choicest servants who had signal influence for good on modern Christianity, its gospel mission, and its engagement with society and culture.

Reformed readers who admire the Puritans will resonate with most of what Sanders says about Wesley’s embrace of “heart religion.” Although Sanders describes Wesley as chiefly a theologian of the heart, this doesn’t mean Wesley’s heart religion was “mawkish, precious, sentimental, manipulative, inward-focused, privatized, or weepy.” Rather, it “press[ed] home the need for spiritual reality.” It was “not about worshiping the heart,” Sanders explains, but about “worshiping God from the heart” in contrast to “formal,” “intellectualized,” and “moralistic” religion. Wesley certainly stood against neither formality, intellect, nor morals, but reacted against an Anglicanism of his day that was formalistic, intellectualistic, and moralistic—squelching out the lived-out reality of life in Christ.

Non-Wesleyans will also appreciate learning how much more broadly “Reformed” Wesley sounds on things like original sin and depravity, the centrality of the gospel, law and grace, and the means of grace.

Reformed readers—like Reformed Arminians such as myself—will of course find themselves deeply at odds with Wesley’s view of Christian perfection or entire sanctification, which Sanders does a masterful and sympathetic job of expositing.

Wesleyans have almost universally rejected this view of imputation, citing John Wesley as support for their view. Yet Sanders offers an alternative reading, suggesting Wesley eventually changed his mind on imputation in favor of the Reformed view. But I think that’s wishful thinking. Wesley’s 1765 sermon “The Lord Our Righteousness” seems to be more vague than the many strong statements he’d made earlier against imputed righteousness. However, in 1772, commenting on the views of Rowland Hill, Wesley reiterated his agreement with Richard Baxter and John Goodwin’s views on justification: “Therefore I will use it no more. (I mean, the phrase imputed righteousness; that phrase, the imputed righteousness of Christ, I never did use.) . . . And I will advise all my brethren, all who are in connection with me throughout the three kingdoms, to lay aside that ambiguous, unscriptural phrase (the imputed righteousness of Christ), which is so liable to be misinterpreted.”

Statements like these are no doubt why the vast majority of Wesleyans since Wesley have denied imputation. With these views on imputation, it isn’t hard to see why they make perseverance more dependent on works, not faith. Reformed Arminians have demurred from that approach, seeing apostasy as possible for the regenerate. Yet because of imputation and union with Christ, apostasy can occur only when a believer makes shipwreck of faith, and that apostasy is irremediable.2

Despite differences, readers across denominational lines will gain a renewed appreciation (or perhaps for the first time) for Wesley and his immense influence for the cause of the gospel in the modern world. And, I hope, readers of this fine work will come away with a bit more of Wesley’s “catholic spirit.” It would do us all a lot of good.

J. Matthew Pinson is president of Welch College in Nashville, Tennessee. A graduate of Yale Divinity School, he has a doctorate from Vanderbilt University. He is author or editor of numerous books and articles, including Perspectives on Christian Worship (B&H Academic) and Four Views on Eternal Security (Zondervan).

2 The Gift of a Distracted Dad

5 Parents, Take Note of the Spiritual Practices Common to Kids Who Flourish As Adults