Glennon Doyle’s Untamed has captured the hearts and minds of American women, hovering around the #1 spot on The New York Times bestseller list since its release. From her roots as a Christian mommy blogger to her rise to fame as a successful author, speaker, and activist, Doyle made headlines in 2016 when she announced she was leaving her husband of 14 years for soccer star Abby Wambauch. The book opens: “Four years ago, married to the father of my three children, I fell in love with a woman.” From there, the memoir documents what Doyle believes was her own untaming—the process of unlearning everything she was taught about family, gender, sex, love, motherhood, God, and Christianity—and forging her own path to find happiness.

Untamed begins with a family trip to the zoo to see the main event, the Cheetah Run. Doyle’s clan watches a trained cheetah chase a stuffed pink bunny attached to the back of a jeep. As the carnivore is rewarded with a piece of meat, the crowd applauds, but Doyle becomes queasy. The taming of the cheetah feels familiar. She realizes that she has lived her entire life like a caged animal, settling for store-bought steaks and the approval of strangers.

This is the metaphor that drives the book. Women: You. Are. A. Cheetah. You are wild. You’re a bit scary. You need to break free from the conventions, expectations, and cultural conditioning of your environment and become . . . untamed. 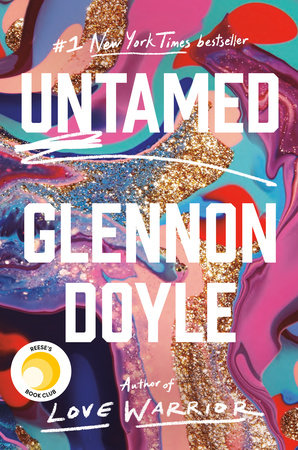 In a culture that often conflates womanhood with a wallflower-y and opinion-less existence, it’s easy to grasp why this book has struck a chord. For women in empty marriages or who feel dissatisfied with motherhood and their careers, it can feel exciting and freeing to be told to embrace your inner cheetah.

In a culture that often conflates womanhood with a wallflower-y and opinion-less existence, it’s easy to grasp why this book has struck a chord.

A consistent theme throughout Untamed is that women should put themselves and their desires first. Doyle asserts that to be good mothers, we must do whatever it takes to make ourselves happy. She quotes Swiss psychologist Carl Jung: “There is no greater burden on a child than the unlived life of a parent.” This realization was the nudge she needed to leave her husband.

Doyle brings the Adam and Eve narrative into focus and blames the Bible for helping construct a culture built on the control of women. She writes, “When a woman wants more . . . she destroys the world.” Later, she boldly states that women shouldn’t think of Eve’s appetite as wrong. She suggests, “Maybe Eve was never meant to be our warning. Maybe she was meant to be our model. Own your wanting. Eat the apple.”

Although she rightly identifies some common problems women encounter, many of Doyle’s solutions will only lead them into deeper bondage.

By reversing the biblical narrative, she turns the Christian worldview on its head. Sin is no longer what’s wrong with the world, but unrealized ambitions. Like placing a band-aid on a gunshot wound, this idea will no doubt send many women on a lifelong journey to find happiness in temporary fixes and impotent solutions.

This is where the beauty of the Christian story shines. Although Jesus promised trials, suffering, and persecution in this world, he also said, “My kingdom is not of this world.” The Christian has a deep and settled peace amid unfulfilled longing because she knows that every tear will one day be wiped away. She doesn’t put her hope in the things of this world but considers that “the sufferings of this present time are not worth comparing with the glory that is going to be revealed to us” (Rom. 8:18).

God of the Morally Relative Self

Doyle quotes Psalm 46:10: “Be still and know.” She credits this verse with inspiring her to take 10 minutes a day to meditate. She “drops lower” with each session, finally finding a new level inside herself she identifies as “a Knowing.” Doyle converses with and consults the “Knowing” whenever she has to make a decision. She then explains:

If what I’ve found in the deep is just my self—if what I’ve learned is not how to commune with God but how to commune with myself—if who I have learned to trust is not God but myself—and if, for the rest of my life, no matter how lost I get, I know exactly where and how to find myself again—well, then. That is certainly enough of a miracle for me.

Doyle writes, “I now take orders only from my own Knowing.” Alluding to Exodus 3, she references God identifying himself as “I am.” She turns the question on herself, asking, “What are you, Glennon?” After a series of queries, she finally answers: “I am. I am. I am.” She regularly conflates the self with God.

Doyle contends that right and wrong, good and bad, and should and shouldn’t are not real concepts, but culturally constructed cages. She instructs women to ignore their minds—which are clouded by indoctrination—and obey their inner voices and deepest desires.

Aside from the obvious anti-intellectual bias, one can’t miss the irony of casting off categories of right and wrong in a book that is basically 300 pages of breathtakingly specific instructions about what women should and shouldn’t do regarding everything from sexuality to religion to social activism.

Aside from the obvious anti-intellectual bias, one can’t miss the irony of casting off categories of right and wrong in a book that is basically 300 pages of breathtakingly specific instructions about what women should and shouldn’t do.

As tempting as it may be to obey our desires, the Bible describes the human heart as “deceitful” and “desperately sick” (Jer. 17:9; cf. Heb. 3:13). It tells us not to lean on our own understanding (Prov. 3:4). Jesus taught that out of the heart come “evil thoughts—murder, adultery, sexual immorality, theft, false testimony, slander” (Mark 7:21). The Christian understands that following Jesus means denying herself, not discovering the god inside. Not untaming her sinful nature but being conformed to Christ’s image. She knows that obedience to Jesus is far better than the temporary high of a better job or a movie-worthy romance because in his presence—not her own—there is fullness of joy (Ps. 16:11).

You’re Not a Cheetah

The thesis of Doyle’s book correctly identifies a problem: Many women live in metaphorical cages because they don’t understand who and what they really are.

Doyle’s analogy of the cheetah contains some truth. The domesticated feline thinks that running after plushie toys for a superstore ribeye is what life is about because she has never tasted the freedom of her natural habitat. She stalks the perimeter of her enclosure with discontent because she knows she was made for more—she just doesn’t know what.

The problem with Doyle’s argument, however, is that women aren’t cheetahs. If women view themselves as untamed animals, they’ll be chasing an ideal that’ll never bring satisfaction. They will end up on their own type of “Cheetah Run” that left the wild beast pacing in her cage with unrealized longings in the first place. Of this longing, Doyle writes: “I felt an electric restlessness buzzing inside me. It was like constant thunder rolling right there beneath my skin—a thunder made of joy and pain and rage and longing and love too deep, scalding, and tender for this world.”

I feel that, too. We all do. It reminds me of C. S. Lewis’s famous observation: “If I find in myself a desire which no experience in this world can satisfy, the most probable explanation is that I was made for another world.” In this, Lewis touches on a much better solution. Instead of comparing ourselves to animals in captivity, the answer to the deep, unrealized yearning we all feel is to recognize that we were created in the image of a holy God with a purpose—to glorify him. Our natural habitat is a kingdom that is here—but not yet. Until all things are made new, we will live in that tension. Obeying our desires might temporarily distract with flashes of transitory happiness and plastic joy, but it won’t deliver freedom.

Obeying our desires might temporarily distract with flashes of transitory happiness and plastic joy, but it won’t deliver freedom.

Doyle offers a counterfeit freedom that emancipates readers from right and wrong, objective truth, the Bible, and Christianity. But it’ll only enslave them to another master—sin. For the Christian, true freedom isn’t apprehended by relying on your inner voice which can misguide you or change on a dime. It’s found by looking deep inside yourself, dying to the sinner you meet there, and turning to Christ. Freedom means trusting in the saving work of Jesus on the cross. It doesn’t justify you to indulge in sin, but liberates you from its power. You realize that to be freed from slavery to sin is to become a slave of God. One master leads to death; the other to eternal life (Rom. 6).

Despite her allusions to Jesus, faith, and the Bible, Doyle’s central message cannot be reconciled with Christianity. In fact, it’s the exact opposite.

With the saccharine promise of discovering your best life now, Untamed is recycled New Age dogma—a prosperity gospel for desperate housewives. But for a woman to find true contentment, she must resist the cultural trend toward living for the here and now. Real bravery means trading your cage for a cross. That’s the only way to cast off the prison bars of self-worship and become . . . not untamed . . . but truly free.

Alisa Childers is an American singer and songwriter who writes at alisachilders.com, an apologetics blog for doubting Christians and honest skeptics.