Four years after graduating from the University of Manitoba with a degree in commerce, Scott Young was looking for a way out. He didn’t want to spend his life in a large corporation surrounded by gray suits and grayer personalities. He wanted to create, and computer science seemed to offer what he was looking for. Problem was, he had never studied computer science, and all the programs were hideously expensive. 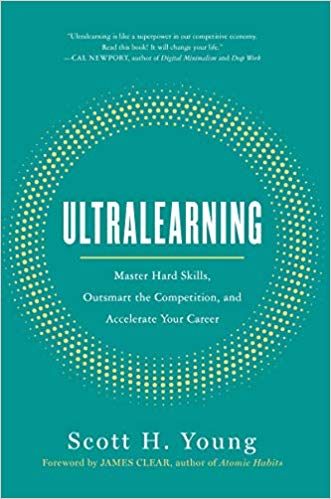 That’s when he discovered that MIT had posted hundreds of class lectures, syllabi, and assignments online. For the next six months, he sketched what he described as his “MIT Challenge.” He aimed to finish an MIT degree in computer science without attending MIT. A year later, he had completed the classes that take a normal MIT student four years to finish.

The MIT Challenge exemplifies what Young calls “ultralearning,” an intensive scheme for self-education that enables people to become fluent in a language in a few months, master Jeopardy! or Scrabble, learn to draw, design, or make Pixel art. An ultralearner may devote himself full-time to a particular task. With a friend, for instance, Young—a self-described writer who undertakes interesting self-education projects—set up a “Year Without English” project in which he became fluent in Spanish, Portuguese, Mandarin, and Korean by spending three months in each country. Sometimes, ultralearners set aside a few hours a week for intensive study of their chosen field.

The bulk of Young’s book, Ultralearning: Master Hard Skills, Outsmart the Competition, and Accelerate Your Career, is an exposition of the nine principles of ultralearning, supported by anecdotes and research on education. For instance, an ultralearning project begins with “metalearning,” an effort to map out the subject of study by interviewing experts or charting basic concepts, facts, and procedures one needs to master. The principle of “directness” means we learn best “by doing the thing you want to become good at” (48). Instead of memorizing verb paradigms and case endings, learn the language by using it in an immersive situation.

He cites studies showing that students learn better if they’re tested before they’re fully confident; tests should be learning experiences, not merely opportunities to regurgitate what has already been learned.

Some of the ultralearning principles run counter to contemporary educational orthodoxy. Young urges learners to resist the lure of social media, and offers wise advice to enhance concentration. He’s a fan of old-fashioned drill, and advocates for students to improve their retention through the advanced technology of flash cards. He cites studies showing that students learn better if they’re tested before they’re fully confident; tests should be learning experiences, not merely opportunities to regurgitate what has already been learned. “Feedback” is a key principle, and must be painfully honest to be effective. Coddling assessments like “You did great!” or “You’re so smart!” actually inhibit learning.

I was most taken by Young’s emphasis on “intuition,” a heightened capacity for pattern recognition. I’ve seen it in pastors: a seasoned counselor can listen to a married couple for 10 minutes and know what’s going on at home. He’s not guessing or being glib. He can spot the problem because he’s seen it so often before. Intuition looks magical, but it isn’t. Counterintuitively, intuition draws on a vast storehouse of knowledge and experience. One study discovered that chess masters have as many as 50,000 game “chunks” stored in their memory, which they retrieve to tackle new scenarios.

Young argues we can enhance our intuition by sticking with hard problems, keeping things concrete, and, above all, observing Richard Feynman’s instruction: “Don’t fool yourself.” We often think we understand things we really don’t. We can avoid self-folly by asking questions, lots of questions, including “dumb” questions: “Explaining things clearly and asking ‘dumb’ questions can keep you from fooling yourself into thinking you know something you don’t” (191).

The book will be helpful to anyone tackling a new course of study, including, for instance, a pastor beginning a sermon series on an unfamiliar book of the Bible.

Ultralearning is inspiring, well-conceived, and full of nuts-and-bolts advice about how and how not to learn. The book will be helpful to anyone tackling a new course of study, including, for instance, a pastor beginning a sermon series on an unfamiliar book of the Bible. Some of the techniques are commonsensical, but, as the saying goes, nothing is so uncommon as common sense.

I was initially skeptical about retention: does someone who learns a language in three months retain what he learns? Young addresses the problem head-on, devoting a chapter to forgetting and offering advice about remembering. For instance, since “knowing how” procedural skills stick in the mind better than “knowing that” content, we should practice and review until our knowledge becomes as automatic as riding a bike. “Overlearning” is another trick for retention: if you learn more than you need, you’ll retain what you do need.

I’m still skeptical, though at a different level. As Young describes it, ultralearning is a self-directed mode of study. That’s an important dimension of learning, but it marginalizes the obverse of learning—the role of teaching. Though Young doesn’t ignore the role of teachers altogether (cf. 144, 218, 232), his method reduces the teacher to mere instrument; they’re brought in when they’re useful to the ultralearner. Ultralearning is, to put it differently, an individualistic form of learning; even when the ultralearner learns with or from others, he’s the one directing the study. In contrast, I believe Eugen Rosenstock-Huessy was right to describe learning as an interpersonal synchrony of past (the experienced teacher) and future (the inexperienced student).

For Young, we don’t learn to acquire wisdom or become immersed in a cultural or religious tradition. We learn to scramble higher up the income scale and to enhance our personal happiness.

And that opens into the other source of my skepticism: what is ultralearning for? Young plausibly says that “rapidly learning hard skills can have a greater impact than years of mediocre striving on the job” (27). Personally, ultralearning “offers a path to master those things that will bring you deep satisfaction and self-confidence” (27). “Skills” is a clue, perhaps a red flag. For Young, we don’t learn to acquire wisdom or become immersed in a cultural or religious tradition. We learn to scramble higher up the income scale and to enhance our personal happiness.

In its telos, as in its methods, ultralearning is individualistic. For all the savvy of Young’s method and advice, his paradigm is a variant of modern liberal models of education. In the end, ultralearning is ultra liberal.