Often when we hear about advanced technology like artificial intelligence, augmented reality, and genetic engineering, we think of some far-off future with flying cars and robot co-workers. Terms like “the singularity,” “superintelligence,” and “transhumanism” seem irrelevant to the mundane problems we deal with as Christians living in a fallen world. Aren’t there more pressing issues?

In his book Transhumanism and the Image of God: Today’s Technology and the Future of Christian Discipleship, Jacob Shatzer—theology and ethics professor at Union University in Jackson, Tennessee—provides a clear and pointed critique of the popular concept of transhumanism, showing that it’s yet another expression of humanity’s belief that we are gods in ourselves. We must think deeply about this issue now if we want to pursue true discipleship in our rapidly shifting culture.

Shatzer helps guide believers through the challenging concept of transhumanism in light of a Christian ethic grounded in the image of God. We need to see how technology is already changing us and to wisely respond—otherwise we’re in danger of passively imbibing the cultural narrative that we can fundamentally change our nature. 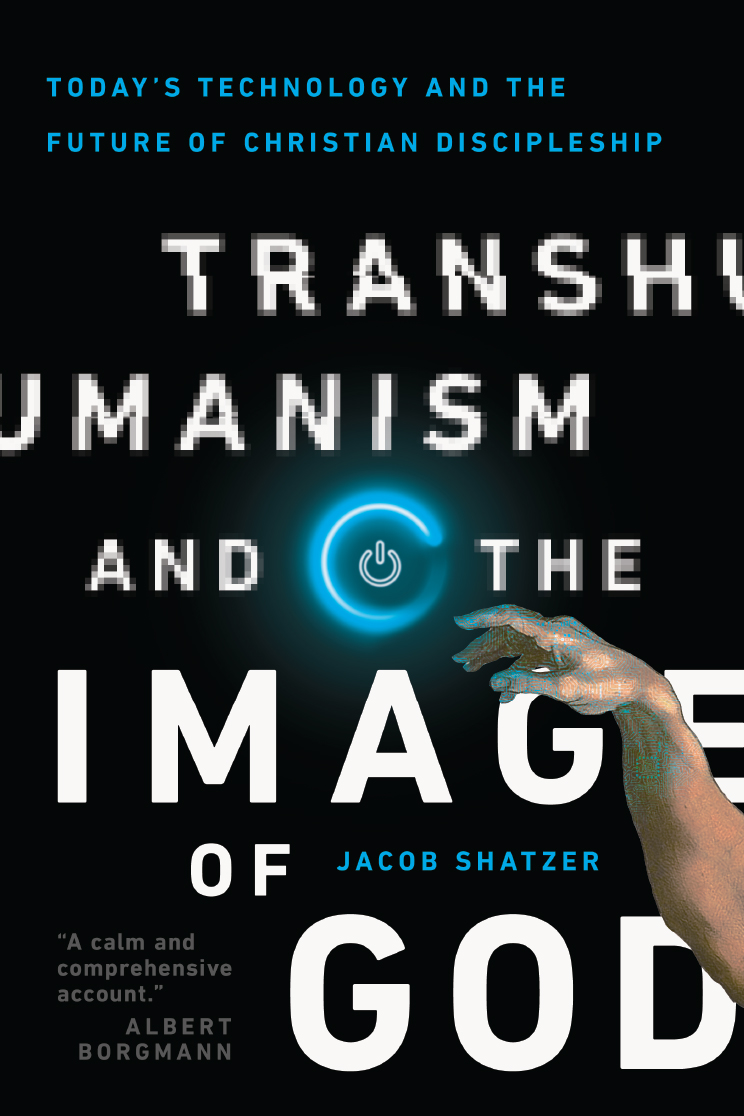 Transhumanism and the Image of God: Today's Technology and the Future of Christian Discipleship

Transhumanism and the Image of God: Today's Technology and the Future of Christian Discipleship

Biblical ethicist Jacob Shatzer guides us into careful consideration of the future of Christian discipleship in a disruptive technological environment. In Transhumanism and the Image of God, Shatzer explains the development and influence of the transhumanist movement, which promotes a “next stage” in human evolution. Exploring topics such as artificial intelligence, robotics, medical technology, and communications tools, he examines how everyday technological changes have already altered and continue to change the way we think, relate, and understand reality. By unpacking the doctrine of the incarnation and its implications for human identity, he helps us better understand the proper place of technology in the life of the disciple and avoid false promises of a posthumanist vision.

Shatzer defines transhumanism as a movement whose goal is to transform humanity by improving human intelligence, physical strength, and the five senses by technological means. Transhumanism “enables us to overcome our biological and genetic inheritance” (40). Shatzer boils this popular concept down to two fundamental principles. First, optimism that humanity can overcome our own humanity, and second, that each individual has the fundamental right to pursue these enhancements (53).

While this might seem like a sci-fi novel or the plot of a new Hollywood thriller, many in the technology field currently are pursuing a way to overcome the limitations of humanity and enable us to attain god-like powers. Popular thinkers such as Yuval Noah Harari (author of Homo Deus: A Brief History of Tomorrow) and Nick Bostrom predict that we’ll transcend our human limitations or be outpaced by an intelligence greater than ours. Humanity must either upgrade or be left in the wake of progress.

We need to see how technology is already changing us and to respond—otherwise we’re in danger of passively accepting the cultural narrative that we can fundamentally change our nature.

Shatzer describes the three main waves of transhumanism: (1) morphological freedom to change ourselves, (2) use of augmented reality to merge the physical and digital world, and (3) the pursuit of artificial intelligence to finally transcend our human limitations entirely. Throughout the book, he interacts with The Transhumanist Declaration, a summary of transhumanism, as well as with popular groups such as Humanity+ and the Christian Transhumanist Association.

Shatzer offers a calm and collected critique of transhumanism based in a rich understanding of how technology can be used to love God and love neighbor. He doesn’t provide a fearful and defensive reaction to transhumanism, but one that is winsome and beneficial for the church. Often in light of emerging technology, we’re quick to adopt the liturgies of this technology without serious thought about how these tools will affect us and the worldview that drives them. Shatzer provides a needed corrective to the false belief that humans are simply machines that need to be upgraded over time to stay useful and retain worth. While humanity was marred by the fall, God’s image wasn’t lost.

Much of the thought behind transhumanism is that humanity is broken and needs upgrading in order to fulfill our true potential. Transhumanists desire to escape our sin-marred bodies and transcend the limitations given to humanity. Some, like Ray Kurzweil, believe that one day we’ll finally be able to overcome physical bodies and upload our minds to escape the brokenness once and for all. Shatzer describes this desire as a symptom of the fall and of our need for the gospel, rather than something to overcome with our own technological innovation (123). Overcoming and transcending humanity is antithetical to both the Scriptures and the gospel. God himself became like us in order to save us. He took on flesh in order to sacrifice his body to save our embodied souls. If we seek to shed our bodies, we lose a fundamental aspect of our humanity and ultimately deny the One who took on flesh to rescue us.

Much of the thought behind transhumanism is that humanity is broken and needs upgrading in order to fulfill our true potential.

While some Christians will recast transhumanism in biblical terms, the movement as a whole is fundamentally opposed to an orthodox and biblical understanding of humanity. Our ultimate need is redemption, not reinvention. Shatzer reveals that many Christian transhumanists operate with at least an implicit debt to open and process theology, which states that God is ultimately open, improving, and adapting, like creation (97). But this theology is at odds with the God who is the unchanging basis for all knowledge and truth. God isn’t open and risky; he’s sovereign and omnipotent. In a world of shifting sand, he is the rock to which we can cling for hope and redemption.

Shatzer wisely points out that “true human flourishing is not found in a technological worldview, but in subordinating our tools to truly human ends” (35). True human flourishing can’t be rushed and is often not convenient or efficient (171). In a culture that prizes those values above all, nothing less than human dignity is at stake in the conversations and debates surrounding technological innovation and progress. Christians see the world differently from transhumanists, since we realize Christ is the one who restores us and our world—rather than us pursuing innovation to ameliorate the effects of sin and our rebellion on creation.

Our ultimate need is redemption, not reinvention.

Christians must reject our culture’s assumptions that true dignity and worth is derived from the economic utility of human life. God’s image is the basis for human dignity. Humanity isn’t something for us to shed or transcend, but something to embrace as ones marked by the bloody and beaten body of a man who overcame death by the power of the Spirit. Christ wasn’t raised from the dead in order for us to transcend our humanity, but rather to restore us to our true humanity—to a right relationship with the unchanging and all-powerful God. Our human limitations are a blessing rather than a curse, for they remind us that there is only one Homo Deus, and his name is Jesus Christ.

Jason Thacker serves as chair of research in technology ethics at The Ethics and Religious Liberty Commission. He’s a graduate of The University of Tennessee and The Southern Baptist Theological Seminary, where he is pursuing a PhD in ethics and public theology. His new book, The Age of AI: Artificial Intelligence and the Future of Humanity (Zondervan, 2020), helps readers navigate the digital age by providing a thoughtful exploration of the social, moral, and ethical challenges of interactions with artificial intelligence.