Taking the advice of C. S. Lewis, we want to help our readers “keep the clean sea breeze of the centuries blowing through our minds,” which, as he argued, “can be done only by reading old books.” To that end, our Rediscovering Forgotten Classics series surveys some forgotten Christian classics that remain relevant and serve the church today. This review is adapted from Sinclair Ferguson’s foreword to Things Unseen: A Systematic Introduction to the Christian Faith and Reformed Theology (Westminster Seminary Press), and is republished with permission.

John Gresham Machen (1881–1937) was, by any measure, one of the towering figures in American evangelicalism in the first half of the 20th century. He was born into a privileged and devoted Presbyterian family in Baltimore, Maryland. His father was a distinguished and scholarly lawyer, an avid reader, a linguist, and a man of theological acuity to boot. His mother—her husband’s junior by more than 20 years—was also a great reader and a deeply thoughtful and sensitive Christian lady.

The young Machen was superbly well educated. Not only did he study classics with the leading Greek scholars of the day both at Johns Hopkins University and the University of Chicago, but thereafter went on to study theology under the most significant conservative scholars in the United States. He was thoroughly versed in Scripture and in the Westminster Shorter Catechism from his childhood. And yet his own faith was solidified only after deep intellectual struggle.

[Machen’s] own faith was solidified only after deep intellectual struggle.

Machen also became personally acquainted with the liberal theology of the continent of Europe and studied with its most impressive and scholarly representatives. He found some of them to be men of outstanding learning, immense commitment and religious conviction, and with considerable natural powers of communication. To that extent he regarded them with appreciation and respect. But he came to the conviction that the Jesus of whom they spoke was not the Christ of Scripture. Therefore, this Jesus could not save and transform. Partly as a result of this, for the rest of his life Machen sought to lay his considerable intellectual and academic gifts at the feet of the living Christ, and devoted himself to expressing the gospel as clearly and fully as he could—whether in the pages of learned journals and books, or in more popular form.

The depth of Machen’s conviction that liberal theology is not Christianity—and the clarity and boldness with which he expressed this—eventually led him to sacrifice the immense privileges of professorship at Princeton Theological Seminary, along with his emotional connection to its history, for the humble beginnings of Westminster Theological Seminary. He would also give up the dignity of being a mainstream Presbyterian minister for the indignities of leadership in what would become the small Orthodox Presbyterian Church. 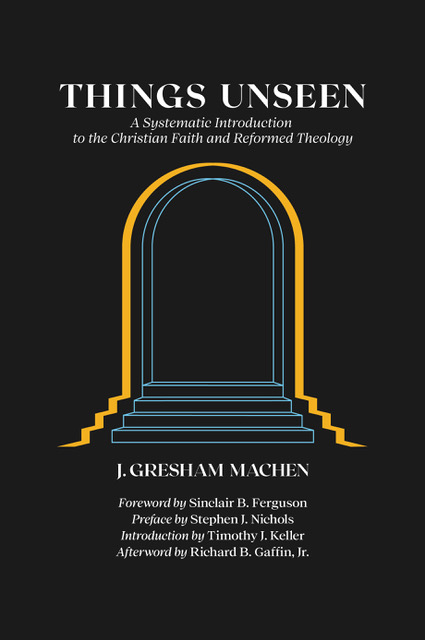 Things Unseen: A Systematic Introduction to the Christian Faith and Reformed Theology

Things Unseen: A Systematic Introduction to the Christian Faith and Reformed Theology

On a Sunday afternoon in 1935, J. Gresham Machen stepped into a broadcast booth at WIP Radio in Philadelphia and began something no one had tried before: teaching Reformed theology over the radio. In the vein of C. S. Lewis’s landmark “Mere Christianity” talks, Machen’s addresses are a crystal-clear articulation of the basics of the Christian faith, unfolding into an exceptional and persuasive explanation of Reformed theology. ‘Things Unseen’ is both an accessible systematic theology, and also a masterclass in evangelistic apologetics.

Although his life was cut short before his 56th birthday, Machen had already published works of permanent significance, such as The Virgin Birth of Christ (1930), a topic on which he’d already written in his final year at Princeton, and his powerful manifesto Christianity and Liberalism (1923). It is not difficult to see God’s providential hand in Machen’s life preparing him to write this latter volume, which continues to make a decisive impact on readers today. He had heard liberal theology “from the horse’s mouth.” He had admired some of its greatest exponents and as­sessed it with intellectual seriousness. Weighing it in the balances, though, he found it not only wanting but also capable of bankrupting both individual Christians and the entire church. This helps to explain the vigor and power of his writing.

It is not often the case that an individual with such massive learning is as gifted a popular communicator as Machen. In fact, much of his published material was addressed not to theologians and scholars but to ordinary men and women. Thus, What Is Faith? (1925) draws on sermons he preached during the year it was published, while the posthumous God Transcendent (1949) contains an eight-message series he preached in Princeton in 1923.

In addition to being frequently invited to preach in churches around the country, Machen became a relatively early entrant into the world of Christian broadcasting; and during what would prove to be the closing years of his life, he delivered several series of weekly radio addresses. These messages are reprinted in Things Unseen: A Systematic Introduction to the Christian Faith and Reformed Theology, and they make for nourishing reading. They are talks of a straightforward, personal, and biblically literate kind, addressed to intelligent, thinking Christians.

Things Unseen covers many areas of systematic theology. Here you will find pieces on revelation and Scripture, as well as on God as triune and as Creator, and on man created as his image but, alas, now fallen, with all the tragic entail of human sin. Machen also handles the themes of creation and providence, and the person, ministry, and work of Christ. He did not attempt to deal in comprehensive detail with all these topics. But it is clear from the contents of this book that he recognized the importance in the contemporary world, as well as in first-century Ephesus, of teaching “the whole counsel of God” (Acts 20:27).

In this work, there is no dichotomy or schizophrenia between the preacher, the biblical scholar, and the systematic theologian. Indeed, although a New Testament scholar, Machen at times discussed the themes of these radio sermons with his younger Westminster colleague and systematic-theology professor, John Murray. In preparation for his penultimate radio message on December 20, 1936, Machen consulted with Murray about the nature and significance of Christ’s whole life of obedience. Less than two weeks later, as he lay dying in a hospital bed in Bismarck, North Dakota, where he had gone to preach, he sent a brief telegram to Murray: “I’m so thankful for active obedience of Christ. No hope without it.” It was his final personal testimony to the wonderful comfort of a theology that is rooted in Scrip­ture and to his own faith in Christ.

As he lay dying . . . he sent a brief telegram to [John] Murray: ‘I’m so thankful for active obedience of Christ. No hope without it.’

Profound scholarly learning, deep personal faith, and God-created courage characterized Machen’s mature life. For that reason alone, every­thing he published is worth reading. This book provides a wonderful sam­ple. Those who already love his work will rejoice to see these chapters in print again. And if this is your first exposure to him, and you’re wondering whether a scholar’s words may fly far above your head, you will soon dis­cover that—like his Savior—Machen was able to speak and preach in such a way that ordinary people heard him gladly.

Much of what J. Gresham Machen wrote was prophetic and remains rele­vant to the church in our own day. For orthodoxy, clarity, and sheer gospel verve, the messages in this volume are hard to beat. If they don’t at first strike you that way, remember that they were originally scripts. They were written with a view to being spoken, and so the best way to feel their force may be to read them aloud to yourself or someone else.

Do this, and it will almost certainly become clear that you are listening to clearheaded biblical Christianity at its finest. And you will perhaps sense why Machen’s personal presence made such an impression, and why many followed his lead. Open Things Unseen and be instructed, encouraged, humbled, strengthened, and, best of all—as Machen would’ve wished—brought to a deeper knowledge of, trust in, and love for the Lord and for his Word.

Sinclair Ferguson is a Ligonier teaching fellow and distinguished visiting professor of systematic theology at Westminster Theological Seminary. He previously served as the senior minister of the First Presbyterian Church in Columbia, South Carolina, and he has written more than two dozen books, including The Whole Christ, The Holy Spirit, In Christ Alone, and, with Derek Thomas, Ichthus: Jesus Christ, God’s Son, the Saviour.