I don’t think we talk about temptation enough. We talk a lot about sin, repentance, forgiveness, and redemption. Somehow temptation, that in-between thing that happens when we haven’t yet done anything wrong but might, doesn’t get enough attention. It’s no fun. It tells me I’m weak, and I don’t want to believe I’m weak. I want to believe I’m strong. And so do you.

In Tempted and Tried: Temptation and the Triumph of Christ, Russell Moore, dean of the School of Theology at the Southern Baptist Theological Seminary, takes Satan, demons, our fallen affections, and our susceptibility to temptations as his topic. He contends that Satan is at work and you are a target. He is looking for ways to make you fall, and all that takes is giving you what you want.

The structure of the book isn’t complicated. There are two chapters introducing the subject, three chapters on the three temptations Jesus faced in the wilderness, a chapter with a bit of practical advice, and a conclusion. It seems simple enough, but this book is so much more.

To me, Tempted and Tried doesn’t fit on the shelf next to treatises on temptation and sin. Moore does more than just do exposition on the biblical story of the temptations of Christ in the desert. He uses that structure to take a romp through the biblical story of redemption, from creation to Christ to his church. Old Testament stories and examples are cited throughout. Connections between the temptations of Christ and the imagery found elsewhere in Scripture and experiences in life are pervasive. Moore is doing careful, surgical work with the Word, but it never seems like the blade is going to touch. His approach is literary and delightful. He knows how to bring a smile to your face right before he shows you the deepest of your struggles. It’s a masterful job. You don’t run from the pain to come, you run toward it. And that’s the genius of this book. He takes what hurts, what’s personal, shows it to you in a way that disarms. 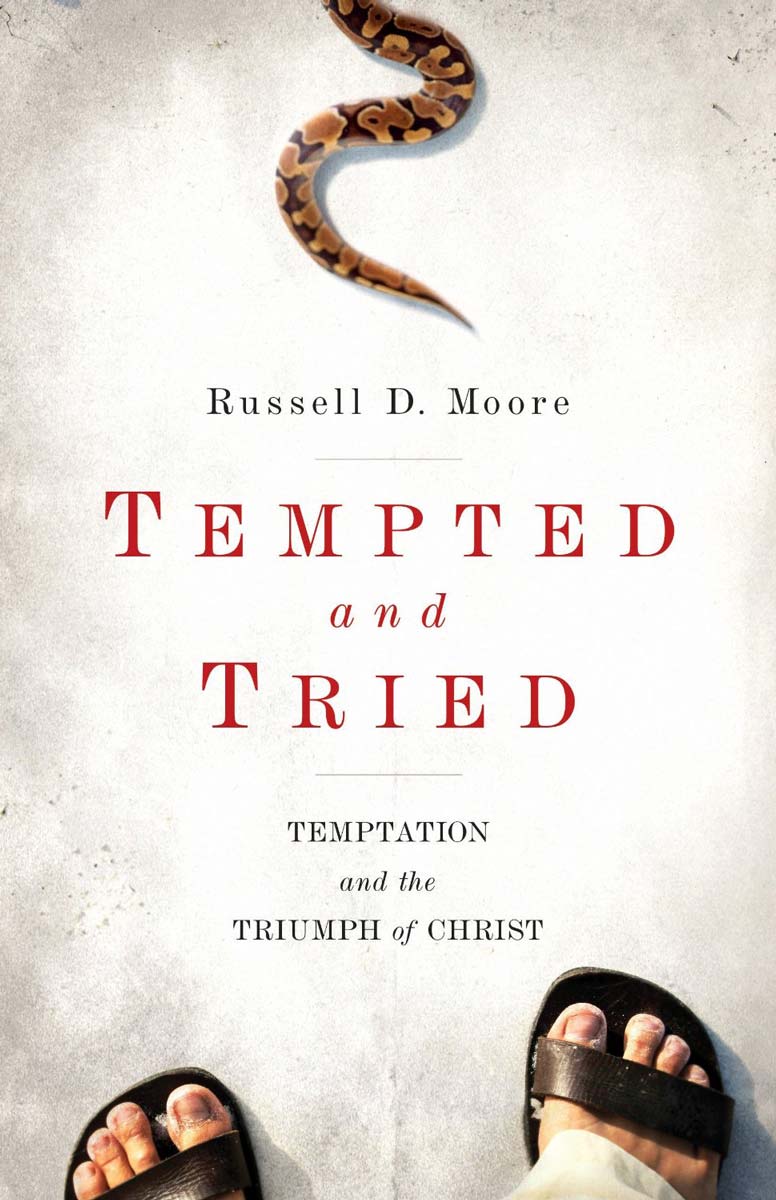 Although temptation is a common and well-acknowledged part of the human experience, few realize the truth behind temptation and fewer still know how to defeat it. Tempted and Tried will not reassure Christians by claiming that temptation is less powerful or less prevalent than it is; instead, it will prepare believers for battle by telling the truth about the cosmic war that is raging.

Moore shows himself not merely an excellent theologian, but also a candid one. He reveals some of his temptations, struggles, and appetites. He reveals real-life events and even calls himself out on something that was public and important in his past. What must have been a hard thing to admit is a breath of fresh air for the reader. Moore takes the narrative of Scripture and weaves it in with the narrative of your life. It doesn’t remain a book about ideas; it becomes a book about you. You find yourself in Christ’s temptations. Of course, that means the book isn’t really about you. It’s about knowing that we “can’t triumph over temptation. Only Jesus can” (195).

This book is going to shake some people up. You may have never seen temptations this clearly before. Moore gives us new eyes to our affections, and new eyes to God’s affection for us. As a pastor I see my people struggling with sin because they know so little about temptation. They continue to put themselves in situations where temptation has the upper hand, and too often so do I. Moore has taken the old truths and delivered them creatively, that change may truly come.

If Tempted and Tried has a weakness, it is in the lengths of the arguments and the meandering style. Some may wonder if he’s getting off track. I assure you, it’s a better path. Christian books often take the easy, plain, and straightforward path to the pinnacle of truth, or the point to be made. The meandering of Moore isn’t lazy writing but brilliant engineering. He’s a Sherpa who leads with wisdom toward the summit, but not too fast, not in straights lines. He leads on a different path, wrestling through the deepest hunger pains, standing on the top of the Temple, and wondering at the greatness of riches and kindgoms—because that’s exactly where Jesus walked and the temptations he faced.

Temptations are quick and sexy. Overcoming them takes discipline, wisdom, and meditation. So Moore takes the reader through a series long meditations, like switchbacks winding up the side of a mountain. They take more time but reduce the grade and make mountain tops attainable. Those who are along for the ride will get a fuller view of temptation, a fuller sense of the dangers all around us, a fuller sense of the activity of Satan, and a fuller grasp on what it means to put our trust in Christ. This is a creative, practical, rich book that will engage and stretch God’s people. Instead of quick answers and hurried advice (which all too often is given the “Amen!” only to be lost soon after), Moore offers a well-crafted path to where Jesus was in his temptations. It’s a glorious trek that I long for others to take.

Tempted and Tried gets the highest of recommendations.

​Steve McCoy is the pastor of Doxa Fellowship in Woodstock, Illinois and blogs at stevekmccoy.com. He and his wife Molly have four kids, three of them teenagers.