For many critics and struggling Christians, these aspects of biblical teaching represent all that is darkest about religion. They give rise to the questions that haunt them at night and linger in the back of their prayers, causing them to doubt they can pray to a merciful God. They are the secret skeletons in God’s closet that have to be denied, or at least hidden away, if we are still to believe him at all. A loving God cannot condemn people to eternal torment, or exclusively judge those in other religions, or send one nation to invade and conquer another. Many of us simply sense in our gut that either God is not like this or God is not real.

In The Skeletons in God’s Closet: The Mercy of Hell, the Surprise of Judgment, and the Hope of Holy War, Joshua Ryan Butler argues the provocative thesis that these are teachings not skeletons in God’s closet—indeed, they are evidence that he is goodness all the way down to his bones. The pastor of global outreach at Imago Dei Church in Portland, Oregon, Butler writes as one who came to faith in Christ and found hope but was then faced with the shock of a Bible that didn’t fit his initial ideas of love, goodness, and justice. But in the course of looking at the bigger story of Scripture, wrestling with theology, working against global oppression, serving on missions to rescue girls stuck in sex trafficking, and spending time in Native American reservations, he began to find in doctrines like divine judgment both hope and healing for creation’s brokenness and human evil.

Taking these biblical, theological, and practical dimensions and using persuasive, clear, and even poetic arguments, Butler weaves them into one seamless tapestry. His ability to exposit Scripture in light of scholarship and everyday personal and political realities—and to do so with theological depth—allows him to cut through so many damaging and damnable caricatures that hold people back from trusting in the fundamental goodness of God.

So what exactly does Butler say about hell, judgment, and holy war?

Take Augustine, C. S. Lewis, N. T. Wright, Tim Keller, even a little Jonathan Edwards, throw them into a blender, and pour it out. Then you have Butler’s view of hell. It is an essentially Augustinian one, tuned to a key postmoderns can actually hear. 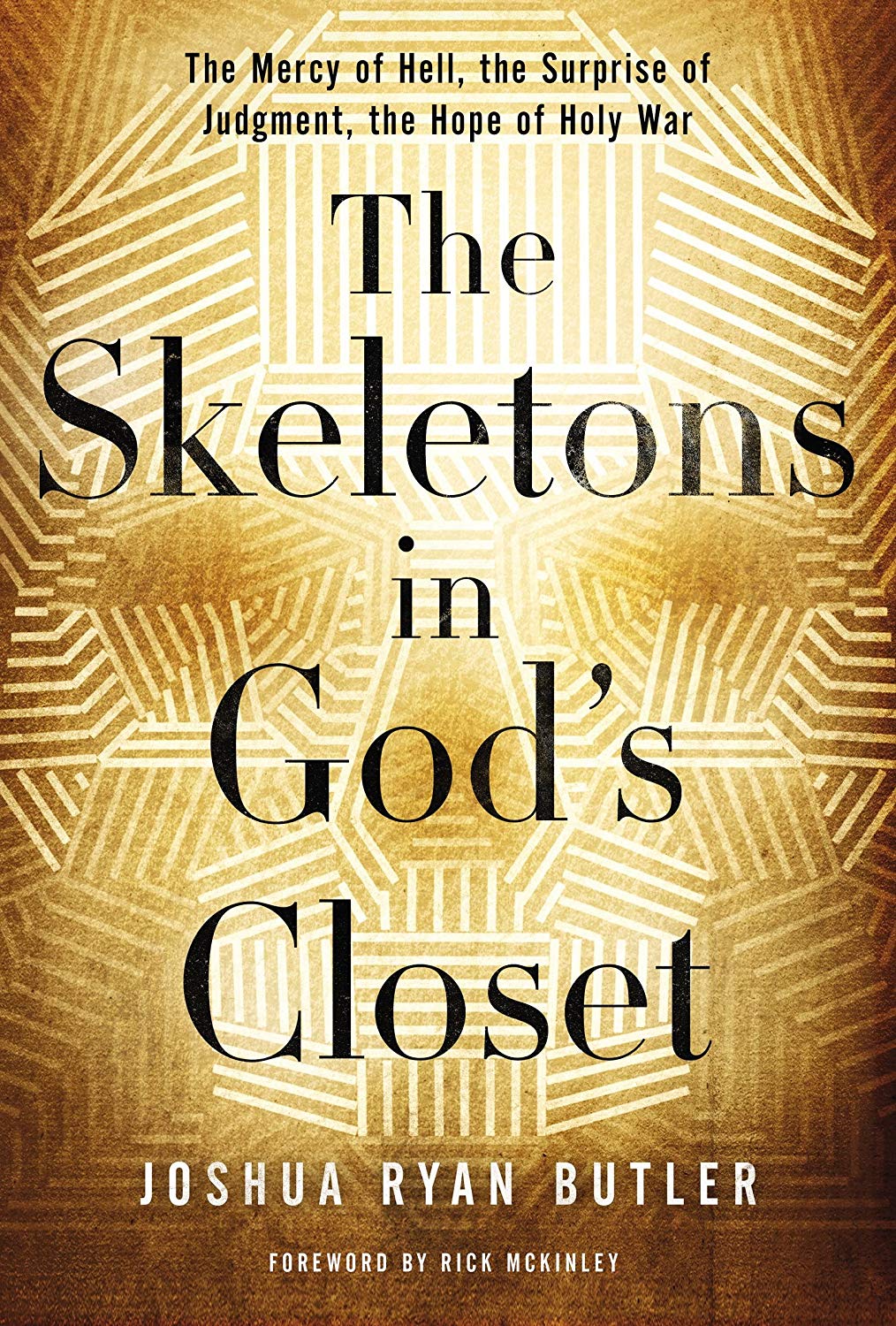 The Skeletons in God's Closet: The Mercy of Hell, the Surprise of Judgment, and the Hope of Holy War

The Skeletons in God's Closet: The Mercy of Hell, the Surprise of Judgment, and the Hope of Holy War

Butler wants us to situate hell in the bigger picture of God’s storyline. Many assume heaven and hell are the parallel realities God has created as options for the winners and losers of salvation somewhere other than earth. Instead, Butler contends, we have a God who created heaven and earth—not heaven and hell—as the cosmic pair. It is human sin that has, in a sense, given birth to and unleashed hell’s destructive power into his creation, rupturing God’s heaven-and-earth intentions. But because he is good, God is going to get the hell out of earth—literally. He’s going to return, judge, and evacuate everything that threatens the goodness of the restored new creation.

Hell, then, is not so much a torture chamber for the damned as it is a containment center cordoning off sin’s destructive power from wrecking the peace of the new creation. It is not a place underground, but the place outside the city where God justly places those who refuse to be healed of their sin, and so remain in their self-chosen torment. While not denying the active wrath of God, or his agency in handing us over, Butler focuses on what the Reformed tradition has called the passive wrath of God: God’s handing over sinners to the consequences of their actions, which exposes the inner logic of sin leading to judgment. Like Lewis, he has a knack for getting you to see the logic of hell at work in your own heart. For example, I might hate sex trafficking, but I cultivate its damaging roots in the lust of my own heart. In a book aimed at postmoderns, this approach is at once more convincing and more terrifying precisely because it helps us understand the inherent symmetry, and therefore justice, of hell.

Butler’s section on judgment is similarly focused on resituating and reframing our understanding in concert with the wider biblical storyline. Drawing on the prophets, he aims to show the way God’s judgment functions within his broader plan to reconcile all things and renew his creation. Judgment is an answer to the brutality of history, a response to the generations of innocent blood that cries out from the ground as Abel’s did. Judgment also exposes the false appearances and false justices of history. God’s exposure is aimed at healing, through revealing our sin and then cutting out the cancer that threatens to kill the whole body.

What’s more, this judgment is surprising. Salvation is not for the few, the privileged, the white, the religious. At the last day we will see the nations stream into the holy city, the poor receive good news, prostitutes enter in before the religious elite, and God’s merciful judgment bring liberation to a creation in bondage. We begin to see why the psalmist thought creation will clap its hands when the Lord returns to judge.

Recently, it seems the problem of Israel’s invasion of Canaan has presented an even greater problem for many than the doctrine of hell. The specter of religious violence, nationalism, and ethnic cleansing of innocent women and children is rightly horrifying to many. As Butler shows, though, the invasion of Canaan is not a bunch of muscular guys with guns and tanks taking over poor, defenseless cities. In reality, it is the story of oppressed slaves taking on empire and depending on the power of God to go before them. “Holy war” is the liberation of the captives, the judgment of empire, and the final action of a patient God who will act to save the weak from oppression.

Beyond that, drawing on recent biblical studies, Ancient Near Eastern studies, and archeology, he shows that the charge of “genocide” doesn’t fit. These ignore essential features of the accounts themselves such as the tactical nature of the attacks against “cities” that were actually small military strongholds. Or we ignore the exaggerated, stylized “trash talking” language of totality involved in speaking of leaving nothing alive. We also fail to consider the biblical context of the patience of God or the assumption of a long-term project of “driving out” the oppressors as testified to in the provisions of the law. And unlike many recent attempts, he does this even while affirming the truth and the goodness of the accounts.

Butler connects all of this with the foregoing theology of judgment and hell, all the while tracing the logic of empire at work in our own economies, homes, and hearts in his final treatment of the judgment of Babylon in Revelation. By the end of this section you begin to long for the beauty of the New Jerusalem descending from heaven, the joyful union of heaven and earth that Jesus shed his blood to bring about. God’s holy war against empire is the prerequisite to the joy of the heavenly banquet for all those she has oppressed.

Good in His Bones

The Skeletons in God’s Closet has the potential to be a game-changer for a lot of struggling Christians and skeptics. Thoroughly orthodox, Butler also speaks in a language and with the sensibility of someone who can still step out of his Christian shoes to hear, think, and feel the tension from the outside. In a lot of ways, it’s the book Love Wins tried to be but failed due to doctrinal drift. Instead, by helping readers walk through the difficult texts in Scripture, Butler sets out for them a broader vision for the beautiful character of a God who doesn’t give a doctrinal inch. Is it perfect? No. Would I have hit a couple of themes harder, or connected a couple of dots differently? Probably.

Still, Butler has done the church a magnificent service by showing a postmodern world that doctrines like hell and holy war aren’t about a God whose malevolence has to be restrained. Instead, The Skeletons in God’s Closet shows us a God who is good down to his bones, and utterly committed to loving and saving his world in Christ.