“I’m not saying never doubt or question,” John Ames writes to his son in Marilynne Robinson’s enchanting novel Gilead. “I’m saying you must be sure that the doubts and questions are your own, not, so to speak, the mustache and walking stick that happen to be the fashion of any particular moment.”

Like most pieces of sensible advice, Ames’s exhortation has been often ignored in the evangelical world. Never mind that the “walking stick” of questioning certainty and doubt themselves is by now well-worn; Peter Enns, evangelicalism’s agent provocateur, has taken it out for one more go about town in The Sin of Certainty: Why God Desires Our Trust More Than Our “Correct” Beliefs.

One would hope that both time and Enns’s well-known history of conflict about his doubts and questions would improve the quality of the effort, and that he would offer deep and substantive words of the kind Ames gives us. Instead, even when Enns offers helpful counsel, it lacks novelty and insight, which left me wondering: Why write this book?

From What to Whom

The answer, according to Enns, is that Christians (still) have a problem with certainty, despite the numerous treatments that have said as much. Specifically, he thinks we’ve identified our faith in God with our thoughts about God, and so have become preoccupied with correct thinking. Certainty becomes a sin when we “turn away from God’s invitation to trust in order to cling to an idol.” Against this, Enns wants us to trust in God—to have a faith “not so much defined by what we believe but in whom we trust.” Enns recognizes there’s overlap between those points, that the latter cannot really be identified without the former. But getting the priority right matters, and helping us do so is his aim. “Not content of thinking, but trust in a person”—that’s the main point Enns makes.

But Enns’s point about the need for faith to generate action—for faith to move us to be “all in”—is standard fare for evangelical youth leaders everywhere. Enns’s images for faith rarely go deeper than the “Jesus trust fall” or leaning back on the sofa and not attending to the cushions. Enns even repackages the standard claim that “God does not like being boxed in. By definition, God can’t be.” Enns may accuse conservative Protestants of a wide variety of intellectual sins and vices, but he seems perfectly happy perpetuating our most banal clichés.

Stylistically, Enns’s prose mostly buries the occasional memorable line among banalities. At one point, he assures us that “the dominoes were unwinding down the slippery slope” is a “clever mixed metaphor—think about it.” Having followed his advice, I fail to see the cleverness: dominoes don’t “wind.” (My opinion may be a minority one: Enns’s endorsers found the book “beautiful,” “delightful,” and “puckish.”) The effect is that of an academic working hard to capture the decentered, self-aware, pseudo-stream-of-consciousness style so popular today—a style The Sin of Certainty proves is harder to emulate than it looks.

Still, Enns’s diagnosis of sins of “certainty” is more accurate than many of his conservative critics might want to grant. The simplest explanation for the emergence of “doubt” as the latest “mustache and walking stick” is that young people are reacting against something. The story Enns tells about the historical sources of the trouble is a parade of the usual villains; but he follows it with an exploration of many of the psalms of lament. The effect is better than a palate cleanser; lament should be an indispensable, regular part of the worship of our churches (and our own private devotions), and Enns handles the psalms deftly. 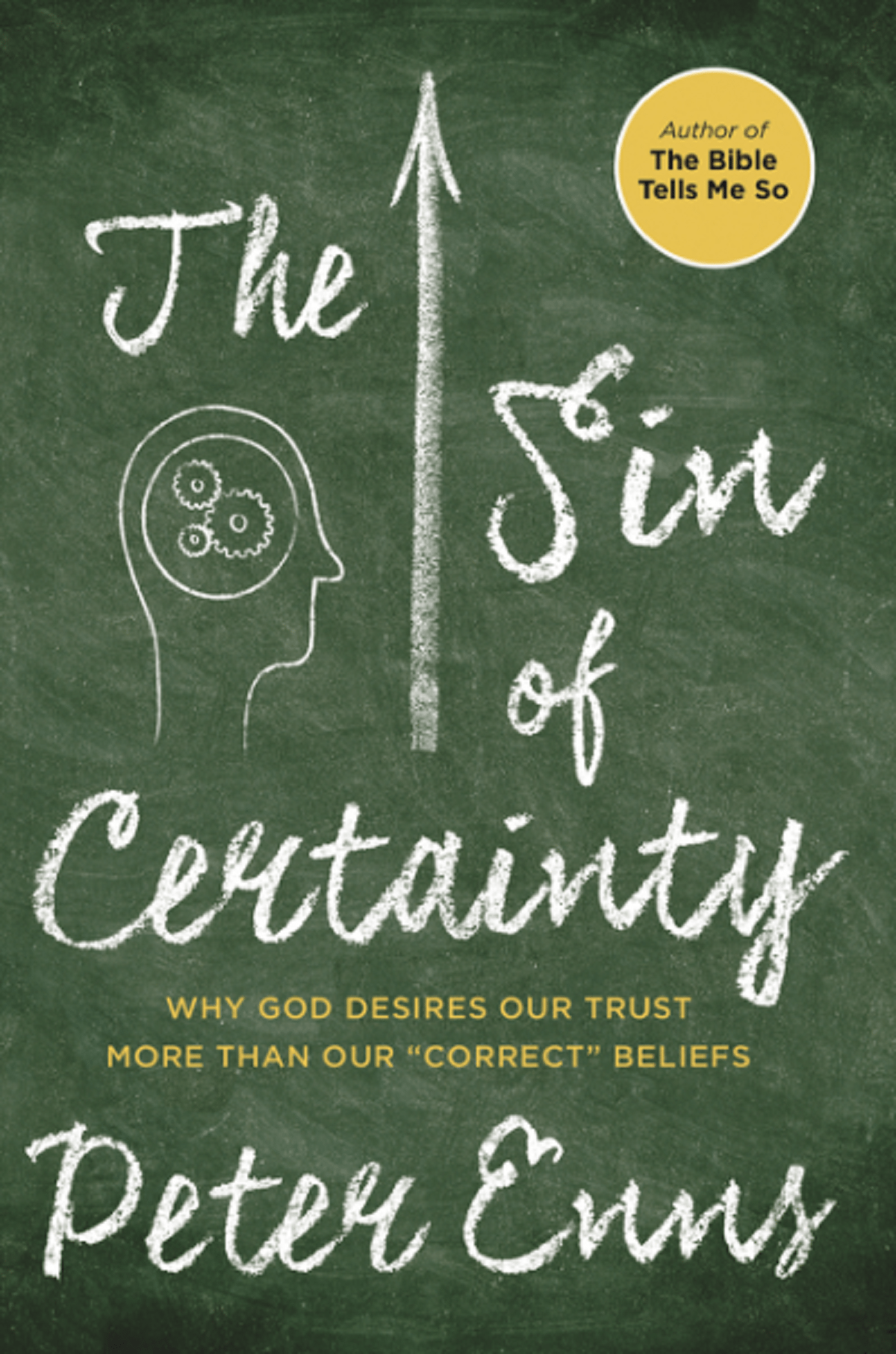 The Sin of Certainty: Why God Desire Our Trust More Than Our 'Correct' Beliefs

The Sin of Certainty: Why God Desire Our Trust More Than Our 'Correct' Beliefs

But it’s difficult to get excited about Enns’s prescriptions. If nothing else, the book is a pervasively individualized treatment of trust. “Faith,” Enns tells us, “is a community word.” If only he’d taken the message to heart. When he lays out how he has “reimagined thinking about God and faith in God,” neither the church nor its practices is anywhere to be found. “Modernity” makes an appearance; God’s transcendence is listed, as is Christianity’s central ineffability. Enns even exhorts the reader to “Trust your experiences, your God moments.” Even if that were true without qualification, it’s a rather lame proposal to a person who might be teetering on the edges of disbelief. Moreover, Enns devotes an entire chapter to “Cultivating a Habit of Trust,” but he spends most of the time relaying a moving narrative of his own life. He lauds his own church community, but he resists commending a similar path to others. That the faith of the church might carry an individual through a crisis is never mentioned, nor even considered.

The Sin of Certainty takes up subjects and questions conservative Protestants still desperately need to address. The ongoing market for such books suggests the problem is not in our “what” but elsewhere, a lesson that if we all took to heart might dry up the well of books trying to solve it.

Because of his past, however, Enns himself is the least likely person to win a hearing with conservative Protestants on the matter—which is perhaps the greatest loss, as he’d be able to speak with an authority on the subject few others can. But The Sin of Certainty isn’t the sort of effort that inspires confidence Enns is interested in this persuasion anymore.

Doubt and suffering are enormously difficult seasons to endure, and Enns’s exploration of them is moved by a strong current of his own pain and sorrow, which make him appropriately averse to reducing them to the latest “walking stick.” But The Sin of Certainty ends up commending an approach to faith that generates the trendiness Enns wants to avoid, and he packages it in a form that will be forgotten in a decade. Perhaps Enns will revisit the subject then; perhaps then he’ll find the audience he covets and, on this subject, perhaps deserves.

2 On Daughters and Dating: How to Intimidate Suitors

3 The FAQs: What Christians Should Know About QAnon

5 Dress Your Best for Jesus

The Greatest Danger for Dating Couples