Few things are more edifying to read than good biblical exposition. Pastors like James Montgomery Boyce, Philip Graham Ryken, and John MacArthur come to mind as compelling exegetes who have turned sermonic expositions into profitable books. These men are not alone, of course. The Christian church has always been blessed with pastors who turn loose their manuscripts after they have preached God’s Word. This tradition continues in the preaching and writing ministry of Anthony T. Selvaggio.

Selvaggio, who currently serves as Visiting Professor of New Testament Studies at Reformed Presbyterian Theological Seminary in Pittsburgh, was formerly the pastor of College Hill Presbyterian Church in Beaver Falls, PA (2000–07). He is an active writer, and his regular subject expositing God’s Word.

Like in his other books—A Proverbs Driven Life: Timeless Wisdom for Your Words, Work, Wealth, and Relationships and The Prophets Speak of Him: Encountering Jesus in the Minor Prophets—Professor Selvaggio, in The Seven Signs: Seeing the Glory of Christ in the Gospel of John, lets Scripture do the talking, while he colorfully and articulately adds commentary and poignant application for contemporary readers.

In The Seven Signs, Selvaggio expounds the seven miraculous signs recounted in John’s Gospel. He writes very simply, “The intent of this book is to help you find God’s truth by exploring the spiritual meaning of seven signs performed by Jesus and recorded in the Gospel of John” (3). Following the inspired purpose of John himself (20:31), Selvaggio seeks to encourage faith in Christ by pointing readers to the Word of God (cf. Rom 10:17; John 1:14).

Before unpacking each of these signs, Selvaggio includes a very helpful introduction on semiotics, the study of signs. He begins by explaining the purpose of signs in the Bible (3–4). He expresses the fact that signs can be miraculous, but that they do not have to be. The greater importance is the role they play in confirming God’s message (cf. Heb 2:4). He writes, “All Old Testament signs served to authenticate God’s appointed divine messengers so that people would believe the message they brought” (4). So it is with the signs in John’s Gospel. They were intended to prove that Jesus was who he said he was, and to help people to believe the message.

Thus, John included the perfect number of signs, and these make up the study for Selvaggio’s book. For those not familiar with these signs, or perhaps unable to remember all seven, we will list them.

Selvaggio brings out the fact that to qualify as a sign, the event had to be done in public and that in John’s gospel the event had to be explicitly designated by John as a sign (semeia). Moreover, these signs were selected by John from a pool of others (John 20:30). So these signs together have a “common, cumulative, and collective purpose” to elicit faith in all who hear of them (7). For this reason, Selvaggio, seeks to help others behold the glory of God’s Son (12).

In each chapter, Selvaggio introduces the sign. He gives the cultural and historical context to help twenty-first century readers understand the way first-century readers would have understood the sign. He delves into the literary content of the sign, traces how the sign adds to the cumulative message of who Jesus is. And invariably, in each chapter, Selvaggio concludes, just like his introduction says he would (12–13), by addressing believers and non-believers. He gives application to those who have walked with God for decades and he also addresses those who are considering the claims of Christ for the first time. For preachers, this is an excellent model of application; and for evangelists, it is a great tool to put in the hands of inquisitive unbelievers.

Overall, Selvaggio faithfully unpacks the seven signs, appealing regularly to the work of D.A. Carson and Andreas Kostenberger, and helps readers better understand John’s signature stream that runs through the fourth gospel. He is a model exegete who pays attention to the biblical theological context of the gospel. On numerous occasions, he shows signal awareness of the changes in the covenants between Old and New Covenants, discerning the continuity and discontinuity. Moreover, Selvaggio demonstrates how to integrate theological doctrine into exegetical preaching, by showing the way that doctrine arises from the text. For instance, in Chapter 5, “The Bread of Life and the Doctrines of Grace” (65–75), Selvaggio introduces and discusses each of the doctrines of grace. He does not force the five-points on the text, but through his explorations in John 6, he shows Calvinists are simply following the teaching Jesus-not just Paul! 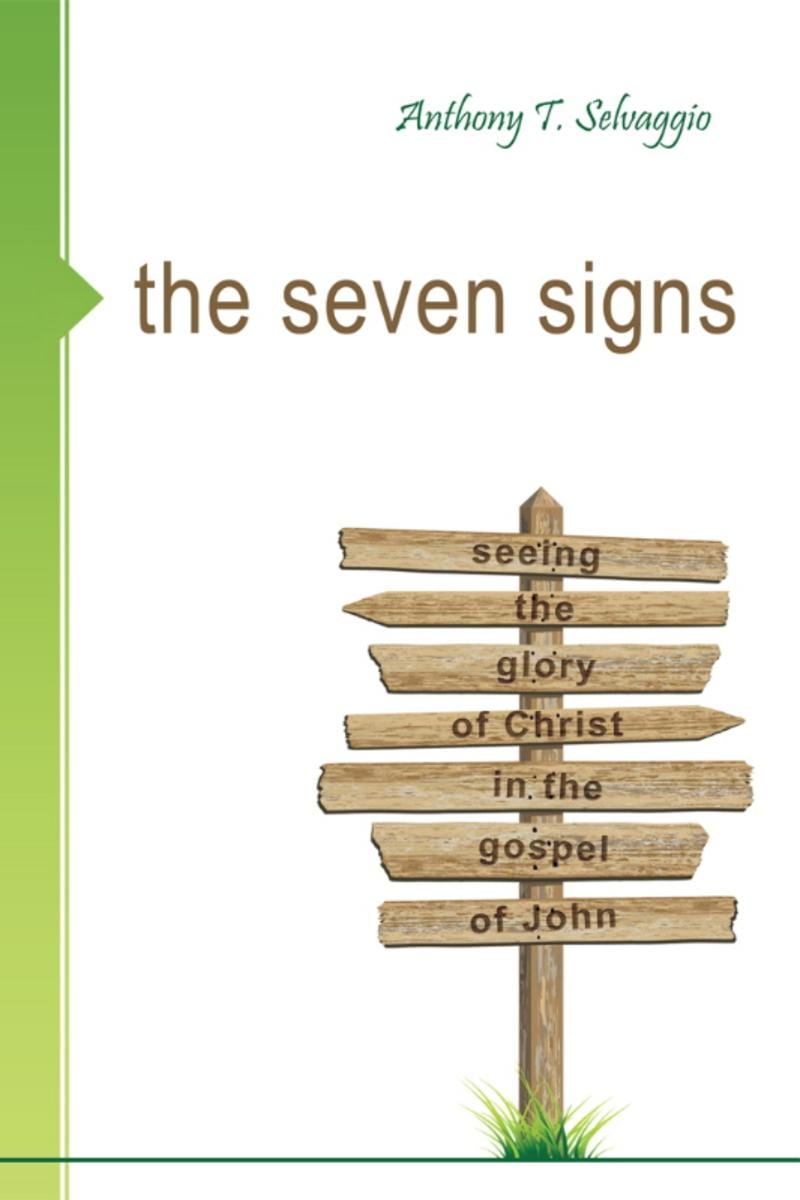 The Seven Signs: Seeing the Glory of Christ in the Gospel of John

The Seven Signs: Seeing the Glory of Christ in the Gospel of John

A major component of Jesus’s ministry on earth was the performance of signs and wonders. In this book, Anthony T. Selvaggio uses the seven signs given in the first half of the Gospel of John to navigate us toward a glorious destination. This journey begins at a wedding and ends at a funeral. Throughout this trip you will witness the incredible events of water being turned into wine, the temple cleansed, a sick boy restored, a lame man brought to his feet, thousands feed, a blind man gaining sight, and a dead man coming forth from his tomb.

Finally, in his last chapter, Selvaggio ties everything together and moves from the typical signs to the antitypical cross and resurrection. He shows that one of John’s main points is to prepare the reader for the end of the story. Taken individually, he shows how each sign points to a significant aspect of Jesus identity as the Christ. Collectively, they work together to prove to those who have eyes to see that he is the glorious Son of God. And progressively, these signs are moving on a course to magnify Christ’s resurrection, the telos to which all the signs point.

John concludes his Gospel with the resurrected and reigning Lord Jesus, and so does Selvaggio. As with every other chapter of the book, the last chapter makes an appeal to believer and the unbeliever alike. For both parties, in different ways, he calls them both to behold Christ (112–14)! Thus The Seven Signs is more than an exercise in hermeneutics, though it is certainly a good model of interpretation. Likewise, The Seven Signs is more than just another manifesto about who Jesus is, though you will gain a much better knowledge of Jesus by reading it and the passages that it highlights. In the end, The Seven Signs is a book which captures the same heartbeat as John himself. It calls all who read it to consider the signs and believe on Jesus Christ, risen in glory!

The Seven Signs is a profitable book and one worth commending for personal devotions or evangelistic outreach. At only 115 pages with study questions, it is the perfect size to read this week to point you to the Christ of Scripture from the signs in the Gospel of John.