Last night, I felt guilty. I dozed fitfully in bed, next to my sore and sleepless husband, and I simply couldn’t wake up enough to massage his aching back. All I could do was lay there and drowsily think, I should be doing something to help him.

With each lucid moment, I was consumed by guilt—over something I didn’t need to feel guilty about at all. It wasn’t selfishness that made my eyelids and hands droop at 2 a.m.; it wasn’t rebellion against God; it wasn’t lack of love for my husband. I was tired. Not sinning.

I experience this kind of guilt frequently. I feel guilty that my daughter fell and scraped her knee—when I couldn’t have done anything to prevent it. I feel guilty that dinner was cold and late—when I was the victim of a blown kitchen fuse. I feel guilty that no one showed up to work in the church nursery—when I wasn’t even on the schedule. Some days, huge amounts of my time are spend shadowed by vague, guilty feelings about things I’m not actually guilty of. 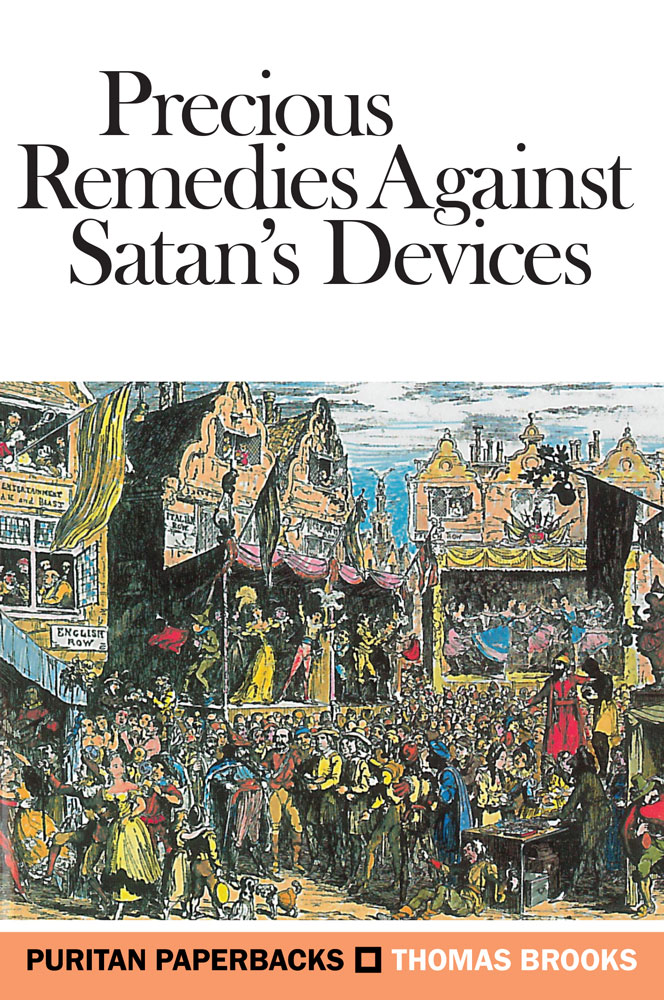 Among the publishers’ reasons for this reprint is the fact, noted by George Smeaton, that the best Christian authors of former times treated the seductive influence and terrible power of Satan in a way ‘greatly more full and suggestive than in the literature of the present day.’ William Grimshaw, in the 18th century, was not the first nor the last to learn this lesson from Brooks’s ‘Precious Remedies,’ and our modern age greatly needs the message which is thrust back into preeminence in these pages.

By encouraging me to focus on my guilty feelings about non-sins, he cleverly distracts me from the hundreds of occasions when I should experience true guilt. The late dinner was no sin, but my impatient and unkind words to my hungry kids certainly were. The unmanned nursery wasn’t my fault, but my failure to then wholeheartedly participate in worship was. When I focus on false guilt, I ignore actual sins.

When I focus on false guilt, I ignore actual sins.

Ultimately, I’m convinced this tactic is one of Satan’s because it so effectively keeps me from Christ. With my soul mired in a foggy swamp of misplaced shame, I never flee to Christ with my true burdens. I fail to hate my sin and confess it, taste the sweetness of his grace, and linger on his love. I’m so muddled, I don’t see the cross.

This isn’t the only way Satan attacks my soul, either. I could list dozens of ways the enemy of God’s people regularly pokes and prods, wheedles and cajoles, twists and spits. And so, under attack, I frequently turn to a classic work by a Puritan preacher. Thomas Brooks wrote Precious Remedies Against Satan’s Devices in 1652, and it has been helping spiritually besieged Christians ever since.

Although little biographical material exists about Brooks’s life, we know he was the minister at two London churches before being evicted in 1662 along with other non-conformist preachers and forced to preach outside the bounds of the established church (12–13). Having ministered during London’s plague and Great Fire (13), he continued to write and preach until his death in 1680 (14).

Precious Remedies may be the best known of his writings, and for good reason. Brooks organizes the 253 pages of his book according to various categories of Satan’s most common tactics. His four main categories—enticing us to sin, keeping us from worship and spiritual disciplines, stirring up doubt, and ensnaring people in particular circumstances—then break down into specific evil strategies, followed by “precious remedies” that saints can employ as counter-insurgence against the Evil One.

I first discovered Precious Remedies as a college student. Opening the book at my pastor’s recommendation, I read Satan’s first tactic: “to present the bait and hide the hook” (29). These seven words shone a floodlight in my soul. How often had Satan presented the sweetness of Saturday night fun—and hidden the hook of my sleepy inability to worship the Lord on Sunday? How often had he shown me the deliciousness of procrastination, ease, self-indulgence, and vanity—and cleverly concealed the horror of rebellion against the God who made me and cares for me? How often had I swallowed that tasty bait and then felt it rip me up inside?

How often had Satan shown me the deliciousness of procrastination, ease, self-indulgence, and vanity—and cleverly concealed the horror of rebellion against the God who made me and takes care of me?

As I read, I realized what Satan was doing, and I resolved to put up a fight. Stop “playing with the golden bait,” Brooks urged me (30). Remember that sin is horrible—“a bitter sweet” (32)—and think long and hard about the great destruction sin brings to your soul (32–33). Learn to recognize the bait for what it is, and keep far away (30, 33–34).

From that moment, Precious Remedies became one of the most precious books on my shelf. Twenty years later, snared in sin or facing temptation, I continue to seek help in Brooks’s pages, and I always find it.

Although a book about Satan’s tactics may not be an immediately appealing nightstand choice, Precious Remedies yields at least three important benefits.

“Be sober-minded; be watchful,” Peter exhorts, “Your adversary the devil prowls around like a roaring lion, seeking someone to devour” (1 Pet. 5:8). Although the invisibility of the spiritual realm often lulls us into complacency, our enemy Satan isn’t asleep. He is active: prowling, roaring, seeking to devour our souls.

Precious Remedies forces us to recognize ever-present spiritual danger and equips us to meet it with eyes wide open.

Satan is a liar and the father of lies (John 8:44). He loves to operate in darkness, shrouding his techniques in confusion. But, with characteristically Puritan precision, Precious Remedies exposes and dissects these devices, robbing them of much of their smoke-and-mirrors power.

While the Christian under attack might feel like Satan’s tactics are bogglingly diverse, Brooks lays them out plainly—and, really, there are only four of them. Though he may be a mighty opponent, Satan isn’t a particularly creative one, and seeing his techniques exposed gives us courage and clarity to fight.

Though he may be a mighty opponent, Satan isn’t a particularly creative one, and seeing his techniques exposed gives us courage and clarity to fight.

3. Reminds Us We’re Not Alone

Under attack from Satan, we can think of ourselves as lone targets. But we’re not isolated victims; we are part of the vast army of God’s people who are continually resisting the same, shopworn set of devilish tactics. Reading Precious Remedies will remind you that your battle with lust or distraction or pride or doubt isn’t unique to you.

We may fight Satan in the arena of our particular circumstances, but our temptations are part of a common struggle. In other places and on other fronts all the soldiers of Christ are fighting the same war alongside us.

Of course, the most precious part of this book is its remedies. As it points us again and again to the truth of God’s Word, the sinfulness of sin, and the loveliness of Christ, Precious Remedies gives us hope.

Satan’s deceptions go back only as far as the moment of his fall. The remedy for his devices comes from eternity past.

Satan’s devices may be as old as the garden, but, by the help of the Spirit, God’s people have been counter-maneuvering ever since Adam’s declaration of faith in Genesis 3:20. Satan’s deceptions go back only as far as the moment of his fall. The remedy for his devices comes from eternity past. In the counsels of eternity, the Father gave his people to his Son, and no one will be able to snatch them out of his hand (John 10:28–29).