“What happened at the Reformation? What did it ‘reform’?” We see the sixteenth century now as a time of radical change, but looked at in the context of the history of disputes among Christians, it turns out to be an episode in a much longer story” (9). With these words G. R. Evans begins her historical survey, The Roots of the Reformation: Tradition, Emergence, and Rupture, reaching backward to the early church and connecting the dots forward to the people, ideas, and events of the Reformation.

The subtitle of this volume is valuable for understanding its central aims (and limitations): “Tradition, Emergence, and Rupture” describes the issues and movements of the Reformation period that grow organically from the early and medieval church. This approach, which has gained momentum in recent decades in the work of scholars such as Irena Backus (Geneva), Eamon Duffy (Cambridge), Diarmaid MacCulloch (Oxford), Ian Hazlett (Glasgow), A. N. S. Lane (London), and David Steinmetz (Duke), contends that if the Reformation legacy is to be properly understood and appropriated, it must be assessed first and foremost by the intellectual and cultural standards of its own day rather than by particularly modern questions, concerns, and expectations.

To its credit, InterVarsity Press (IVP) ceased publication of the first edition of this volume shortly after its release, when it was brought to the company’s attention through scholarly reviews (especially Carl Trueman’s) that it contained an embarrassingly high number of inconsistencies—mostly inaccuracies of names and dates. In response, a press release was issued stating the text “did not represent the academic standards we as a publisher hold ourselves to, and we decided to take full responsibility for them.” Well done, IVP! As a result, the following review is far more positive than the original version.

Evans, professor emerita of intellectual history and medieval theology in the University of Cambridge, is suited for the task of assessing this crucial era. A prolific author of numerous patristic and medieval studies, including volumes on Gregory the Great, Anselm of Canterbury, John Wyclif, Bernard of Clairvaux, and Alan of Lille, she manifests a familiarity with the literature along with an enviable knack for clear exposition. The Roots of the Reformation is a natural continuation and leveraging of her expertise.

Evans is eager to persuade readers that the Reformation is a stage in the continuing story of the church rather than a revolution that somehow deviates from it. Accordingly, the Reformation is best viewed as a part of Christianity’s age-old movement to bring healing, renewal, and correction rather than what some have called the “Ditch Theory”—the axiomatic storyline that locates genuine Christianity in the apostolic period up to Constantine’s Edict of Milan, when it descended into the ditch, only to be mostly retrieved in Luther’s 95 Theses and finally restored in the founding of my particular denomination or church. Over and against such reductionism, Evans demonstrates that a great deal of fruitful thinking developed in the preceding centuries—reflection that deeply informed and enriched the 16th-century vision. 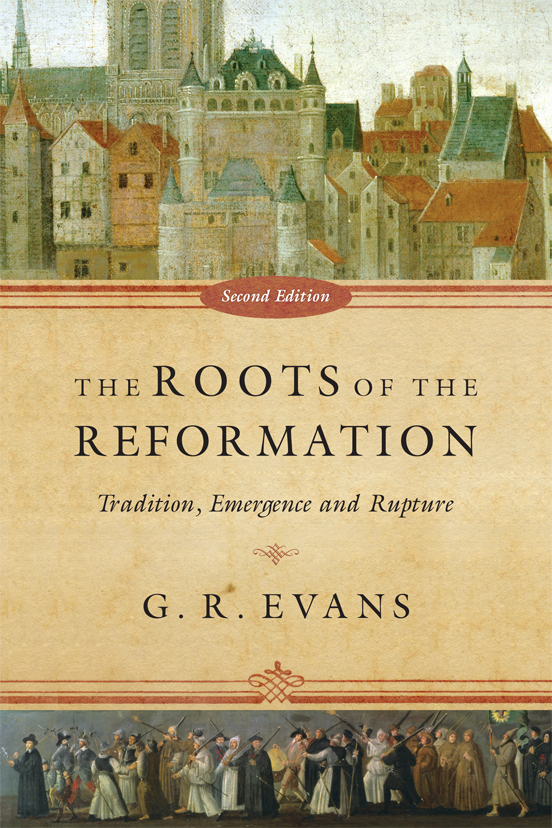 The Roots of the Reformation: Tradition, Emergence, and Rupture

The Roots of the Reformation: Tradition, Emergence, and Rupture

The book is divided into three major parts: “Bible and Church: The Questions Begin,” “Continuity and Change in the Middle Ages,” and “Continuity and Change from the Reformation.” Within these sections are 23 robust chapters that guide readers through an array of episodes, tracing the development of the church’s longstanding challenges and opportunities, including debates surrounding Scripture, faith, authority, ecclesiology, sacraments, institutions, preaching, and politics. These discussions compare and contrast the ideas of various Reformers (including Luther, Calvin, Zwingli, Melancthon, Bucer, Bullinger, Baxter, and Hooker) and consider how their thoughts intersected with the range of discussions found in Cyprian, Augustine, Gregory, Anselm, Bernard, Wyclif, and others. Throughout this examination, Evans is careful to present a healthy measure of primary sources, allowing figures to take center stage and speak for themselves.

The literary shape of Evans’s work takes its cues from the 14th-century poet William Langland, whose Piers Plowman applied “scene establishing” analyses to the people and social norms of his day by means of a grassroots investigation. Such a method creates the general ethos—if not the link and flow—of each chapter, zooming in to observe the human factors on the ground before panning out to see the larger theological themes that consequently emerged.

For example, chapter seven, “Penance and the Recurring Problem of Sin,” considers the penitential route in the centuries following Cyprian. After describing the practical steps required in the name of “penance”—everything from public humiliation in sackcloth and ashes to appearing before the bishop for sentencing and absolution—Evans draws insight from Martin Bucer’s Commonplaces before proceeding to describe the process by which penance became a private activity (80). Texts are cited, confessors’ manuals are introduced (82), and the line of reasoning that eventually led to the development of purgatory is traced. Dante’s Divina Commedy is considered (83-84) and the practice of indulgences takes the spotlight. In this connection, the First Crusade enters the story as a prominent occasion in which the use of indulgences grew (85), and a host of fascinating details emerge to fill out the picture. Evans tells the story with theological subtlety, distinguishing various “isms” and their variants without slicing the onion so thin as to produce blurriness of vision.

Another example is the way Evans treats the familiar storyline leading up to Luther (i.e., the 15th-century bid for conciliarism instead of primatial church government following the Council of Constance; John Wyclif; Jan Hus; and the demise of the consensus fidelium at the Council of Basel-Ferrara-Florence), explaining how it encouraged the freedom to dissent and formed the conceptual framework with which Luther and his contemporaries launched the reformation of Catholic doctrine (102–111). But Evans then pans out further to provide a broader view, showing how these issues related to the medieval concept of ordo (the hierarchical order of religious and civil power) in the body politic of the church (117–129). This is one of many ways in which 16th-century theological discussions are put into a context that would’ve appeared self-evident to Catholics and Reformers of the day.

Every critical reader will identify some favorite topic Evans slights or perhaps omits. Personally, I’d liked to have seen more explanation of volunteerism and nominalist theology (surprisingly, Gabrie Biel’s name doesn’t even appear in the index). Other topics receiving short shrift include Catholic renewal movements like de emendanda ecclesia under Pope Paul III or the history of Evangelisme in Italy. There’s nothing about the spread of alumbrado spirituality from Spain, the Valdésian circle of Naples, or publishing activity that produced works such as the Beneficio Di Cristo. Evans describes the influence of continental reformers, men such as Bucer and Peter Martyr Vermigli during the Marian dispersion and Elizabethan Settlement, but there’s nothing about their significance during the reign of Edward VI when they assisted Thomas Cranmer in composing the Book of Common Prayer from Cambridge and Oxford, respectively. Most disappointing is Evans’s treatment of the sacramental system. Hardly two full pages are dedicated to the subject (94–96), with few passing references elsewhere.

There are a number of special features to The Roots of the Reformation that set it apart. Its organization and indexing are extraordinarily clear and accessible. Inner textual links appear throughout, directing readers to fuller treatments of topics elsewhere in the book. Biblical references and dates of noteworthy events are ubiquitous. Latin phrases are translated, and footnotes furnish enough primary sources to be helpful without devolving into pedantry. The final chapter, “Bible Questions Continue,” is of durable worth, considering contemporary issues of particular relevance. An appendix offers resources for further study, followed by author, subject, and Scripture indexes.

Evans resists the common tendency to ossify Protestantism into fragmented communities in juxtaposition to one another around narrow doctrinal tenets. While recognizing distinctive beliefs and practices, Evans excels in portraying the common narrative to which Reformation figures and institutions belong. It’s here her subtitle is best understood. “Tradition, Emergence, and Rupture” capture the paradoxical nature of the Reformation—that while severed from preceding centuries it is simultaneously rooted therein so as to ensure continuation. Evans writes:

Cries of schism began to give way to a pragmatic acceptance that there could be a variety of modes of being the church. In parts of northern Europe the church was no longer the Church of Rome but perhaps the Church of England or the Church of Scotland. Those who still held firmly to the view that there was only one church and it was theirs were nevertheless faced with the undeniable reality that others were able to sustain their similar claims elsewhere. (471–472)

For all these reasons, this learned, humane, and vibrant book deserves a place among your favorite church history texts.