I keep a shelf of conversionist and church-proselytizing literature in my office library, but I don’t look at it very often, or like it very much.

Most of the books in that genre contain rather poor writing and weak editing, since they’re often churned out from tiny presses to serve a niche market. What is that niche market? It’s people who for various reasons have come to view differences among churches as an urgently vital thing to read books about.

There are times and places where that’s entirely valid, because the theological and spiritual differences are real, which is why I dutifully keep the books around. But even if you avoid the nasty and bellicose entries, the whole genre suffers from a downward tug, a gravitational pull toward low standards of argument, appeals to base motives, and cloying self-congratulation. Few books in the genre avoid palpable tackiness. More importantly, they usually radiate heat without light; when you read them you risk your mind getting softer as your heart gets harder.

But Ken Collins (professor of historical theology and Wesley studies at Asbury Theological Seminary in Wilmore, Kentucky) and Jerry Walls (professor of philosophy and scholar in residence at Houston Baptist University in Houston, Texas) have somehow broken the spell. They have teamed up, as a church historian and a philosopher, to write a well-reasoned, informative, and truly helpful book about Roman Catholicism. Roman but Not Catholic: What Remains at Stake 500 Years after the Reformation is a serious and substantive account of what Protestants can’t accept about Roman Catholic theology.

What they can’t accept is simple: they object to the exclusive claims of the Church of Rome to be the one true church, and the only ecclesial entity deserving the title of catholic. With this focus, Collins and Walls work through the various doctrines and traditions that are distinctively Roman Catholic (in the areas of sacraments, priesthood, papacy, Mariology, and justification), citing the church’s own authoritative texts and respected spokesmen (the 1994 Catechism shows up a lot, and John Henry Newman is a recurring voice). They call in support from the Eastern churches to illustrate the areas in which Rome is peculiarly isolated in her truth claims. And throughout, Collins and Walls go deeper into the argument than any book I know of.

To get a feeling for the depth of the analysis in Roman but Not Catholic, consider the decisions the authors make in just one chapter, “Revelation, Biblical Authority, and Creed” (chapter 5 out of 20). Collins and Walls set out to show that

there are perfectly good Protestant reasons to accept the authority of the Nicene Creed and indeed that biblical and creedal authority stand together but do not require us to accept the claim that the Roman magisterium is the exclusively authorized interpreter of Scripture.

The first step is to establish a case for Scripture’s canon, which they do in dialogue with the best recent work on the subject. They especially draw on Michael Kruger’s “epistemological account of how Christians can be rationally justified in believing” that the New Testament canon is authoritative, rightly noting the way Kruger’s work is a kind of historical-biblical application of Alvin Plantinga’s work on warranted belief.

All Christians are grateful for the early church’s recognition of the canon of Scripture, but Collins and Walls show it’d be putting the cart before the horse to think of the church’s authority preceding or grounding Scripture’s. Rather, “the church’s reception of these books is a natural and inevitable outworking of the self-authenticating nature of Scripture.” 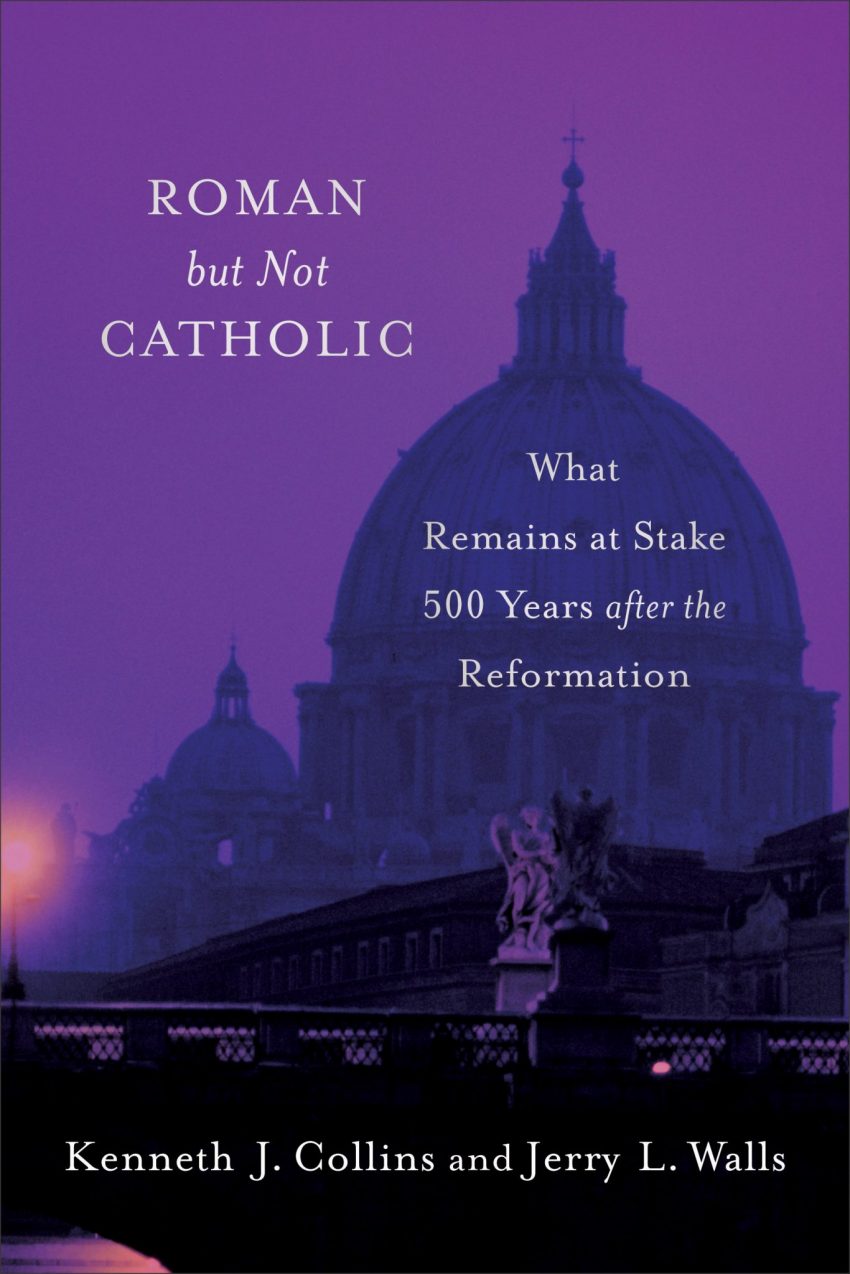 Roman but Not Catholic: What Remains at Stake 500 Years after the Reformation

Roman but Not Catholic: What Remains at Stake 500 Years after the Reformation

This book offers a clearly written, informative, and fair critique of Roman Catholicism in defense of the catholic faith. Two leading evangelical thinkers in church history and philosophy summarize the major points of contention between Protestants and Catholics, honestly acknowledging real differences while conveying mutual respect and charity. The authors address key historical, theological, and philosophical issues as they consider what remains at stake five hundred years after the Reformation. They also present a hopeful way forward for future ecumenical relations, showing how Protestants and Catholics can participate in a common witness to the world.

Several times in this chapter, as throughout the entire book, I felt as if the authors were reading my mind. For instance, as they began to sharpen the notion of sola scriptura, I found myself thinking, Too bad they can’t incorporate Mike Allen and Scott Swain’s account of the way sola scriptura serves to relate Protestant thought to pre-modern Bible interpretation.” Then I turned the page and found that them doing so!

Similarly, I was glad to see Collins and Walls working with William Abraham’s argument that “to reveal” is an achievement verb (that is, a thing that only takes place at all if it succeeds in taking place, or has its intended result: in this case, to be revelation that is received). But I found myself thinking, Too bad they won’t interact with the strongest recent Roman Catholic use of this argument, Matthew Levering’s book on the nature of revelation. But on the next page they took up a lively and sustained dialogue with Levering, which was clarifying.

Finally, once the doctrine of sola scriptura became explicit in the argument, they immediately showed how it applied to a Protestant approach to doctrinal development that is distinctively different from Newman’s. The caliber of the arguments and interlocutors in this chapter is impressive. This is no defensively short-sighted attempt to fend off Rome’s claims, but a real wrestling with the underlying issues, with considerable depth and refinement.

In fact, Roman but Not Catholic is written at such a high level that it may not be immediately useful for Christians eager to resolve a case of “Roman fever.” The writing is clear and elegant, but the arguments are often more refined than the popular market will bear. It’s more than 400 pages long, and its physical weight is not the only thing that gives it the heft of an academic work. Collins and Walls are scrupulous about providing the right kind of evidence for their claims; sometimes this entails considerable historical detail, and other times it requires some epistemological coaching in what counts as a valid argument.

Most people won’t want to give it to a friend conflicted about Roman Catholic claims; it will be more useful for pastors and teachers to read for themselves so they can replicate, mobilize, and contextualize the arguments in it. The book bears a family resemblance to recent academic projects like Kevin Vanhoozer’s “Mere Protestant Catholicity” or Swain and Allen’s “Reformed Catholicity,” though stopping short of some of the disorienting rhetoric of Peter Leithart’s “Reformational Catholicism.”

Roman but Not Catholic is likely to earn a wide readership and long lifespan, because while it is definitely a pointed, polemical, Protestant argument, it also treats Roman Catholics as fellow believers rather than as pagans. “We have no interest in converting you to our church,” they assure their Roman Catholic readers. This may seem like an odd posture for a book that is targeted at refuting Roman Catholic claims and that doesn’t shrink from naming and itemizing the serious soteriological errors of Roman Catholic theology.

The key is that the authors do have a definite interest in convincing Roman Catholics to cease and desist immediately from their groundless boasting that the only way to be part of the universal church is to pledge allegiance to the Roman church. In other words, the authors have in mind a definite reform of Rome they would like to see.

As they explain in the introduction, Collins and Walls were moved to write the book because of the significant number of Protestant friends who were troubled by Roman Catholic claims. Protestants, they argue, have a theology that allows them to be more ecumenically receptive and generous. The book’s distinctive tone of voice probably comes from the authors’ decades of experience with friends and family who are Roman Catholic. Collins and Walls are never writing about some religious other out there, but about friends and loved ones, some of their own teachers and students.

Yet they never descend into bland ecumenical-ese. In some places it’s pretty obvious that they re punching the buttons of their Roman Catholic friends, indulging in a bit of “trolla scriptura.” They know where to strike! It may also be helpful that this book of anti-Roman polemics is written by Wesleyans rather than by Reformed theologians. Too often the rest of the evangelical world leaves polemical tasks up to the Calvinists, so it’s good to see two Wesleyans of a rather generous temperament taking the lead here. Their own theological commitments also give Collins and Walls a unique vantage point on the Roman way of describing regeneration; in chapter 19 they pick up on a soteriological problem with the Roman Catholic theology of regeneration that most Reformed analysts might have missed.

Collins and Walls move up and down the scale from popular arguments to more academic arguments. In chapter 14 they address “popular Roman Catholic apologetics;” they seem to have pooled a lot of toxic assets into this chapter that engages the “rhetorical overkill” of popular arguments, but they have earned the right to do so by spending most of the book interacting with the best representatives of Roman Catholic claims.

When they devote attention to kind of thing we hear on Roman Catholic radio, Eternal Word Television Network (EWTN), or from recent converts, they’re doing so in an attempt to break the hypnotic effects of “Roman fever.” In these interactions, you can hear the echoes of that low tone of mere wrangling that resounds in so many of the clashes between Protestants and Roman Catholics. But in context, it’s not so much a lapse in this book’s rhetoric, as a reminder of how most people talk about these things.

As I re-shelve Roman but Not Catholic, I find I can’t put it on the same shelf as most of the “Why You Should/Shouldn’t Convert to X” books. It simply won’t keep company with the mendacity and hype that cling to  the genre. It’s that good. In fact, this book is good enough—thorough, careful, and up to date—that this week I can purge about a half-shelf of inferior and obsolete books. There’s a real need for clear and honest polemical literature about serious Christian differences, and Collins and Walls have raised the standard for how they should be written.

Fred Sanders teaches in the Torrey Honors Institute at Biola University. He has written and contributed to a number of books, including The Deep Things of God: How the Trinity Changes Everything, 2nd ed. (Crossway, 2017), The Triune God (Zondervan, 2016), and The Image of the Immanent Trinity: Rahner’s Rule and the Theological Interpretation of Scripture (Peter Lang, 2004).

4 Is Being Gay Genetic?

5 Survey: Half of U.S. ‘Christians’ Say Casual Sex Is Acceptable