With each passing year, it can seem that cultural developments are only getting worse. The unending creativity and output of Western debauchery is one of its hallmark industries. “Live Your Truth” and “You Do You” asininities ensure that critical investigation about the goals of human nature are subjugated beneath the hierarchies of nerve endings and atomized “rights.” A rejection of God’s authority over creation explains one reason for our cultural plight. But cultural realities are forged by a complex milieu of ideas, personalities, and artifacts that build on one another in genealogical sequence to get us to where we are today.

Enter iconoclast Carl Trueman, who has written one of the most anticipated books of 2020. In The Rise and Triumph of the Modern Self: Cultural Amnesia, Expressive Individualism, and the Road to Sexual Revolution, Trueman explains how modern-day formulations of identity—the “Self”—have yielded a paradigm of personhood that is often weaponized for psychological, sexual, and therapeutic triumph. Any claim, then, that would threaten one’s self-chosen sense of self-conception, sexual freedom, and therapeutic needs is not only improper, but possibly criminal.

It’s difficult to distill 400 pages of complex intellectual history into a few paragraphs, but the title explains the overall thrust of the argument: intellectual, aesthetic, and cultural developments in Western culture have radically transfigured, by way of secular disenchantment, how modern men and women conceive of human identity and liberty and flourishing. 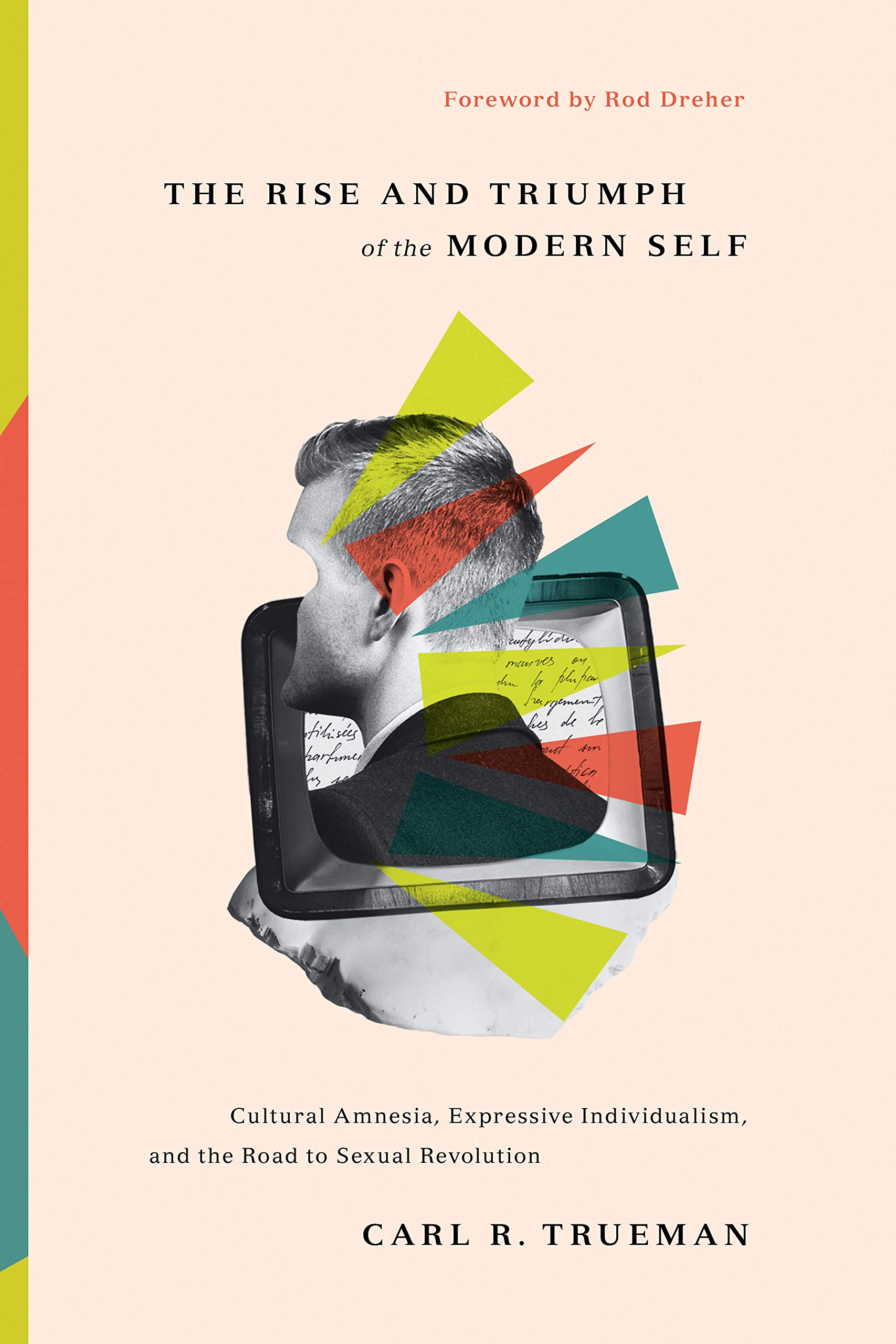 Modern culture is obsessed with identity. Since the landmark Obergefell v. Hodges Supreme Court decision in 2015, sexual identity has dominated both public discourse and cultural trends—yet no historical phenomenon is its own cause. From Augustine to Marx, various views and perspectives have contributed to the modern understanding of the self.

In this timely book, Carl Trueman analyzes the development of the sexual revolution as a symptom—rather than the cause—of the human search for identity. Trueman surveys the past, brings clarity to the present, and gives guidance for the future as Christians navigate the culture in humanity’s ever-changing quest for identity.

No longer does a person understand himself as made in God’s image, but rather as someone whose identity is endlessly pliable according to his own desires and felt needs. The current zenith is the sexual revolution, whose anthropology ties human dignity and personhood to one’s ability to live unencumbered from any tradition or moral restraint that would limit the fulfillment of desire or will. Trueman aims to explain the genealogical foundations of the sexual revolution’s triumph.

In part 1, Trueman—professor of biblical and religious studies at Grove City College in Pennsylvania—engages the work of sociologist Philip Rieff (1922–2006), philosopher Charles Taylor (1931–), and ethicist Alasdair MacIntyre (1929–) to explain the inward turn morality has taken within modernity, a morality defined by one’s sense of therapeutic fulfillment and “authentic” self-actualization.

Part 2 looks at Rousseau, Nietzsche, Marx, and Darwin, who all in their unique way made belief in personhood possible apart from theistic foundations. No longer defined by relationship to God-ordered and embodied ends, human teleology is now redefined according to materialism, power differentials, and romantic sensualism. Percy Bysshe Shelley (1792–1822) and William Blake’s (1757–1827) artistic re-expression of sexual norms conditioned a moral imagination severed from Christian norms, demonstrating how culture is shaped not just by ideas but also by aesthetic influences. A worldview isn’t simply cognitive, according to Trueman, but is held captive to precognitive commitments ordered by affection, habit, and desire.

Sexuality’s central role is crystallized in part 3. Trueman uses the work of Sigmund Freud (1856–1939) to discuss how, in a secular view, all aspects of human personality and fulfillment are subliminal, subconscious expressions of innate sexual desire. For Freud, all matters of existence are bargains and compromises to maximize one’s inner sexuality. Gone is homo adorans (“worshiping man”); in his place is homo eroticus (“sexualized man”). From here, Freud incorporates the work of Wilhelm Reich (1897–1957) and Herbert Marcuse (1898–1979). Synthesized together, Trueman posits the theoretical background for the sexual revolution: libidinous desires exist for seeking maximal expression as well as freedom from restraint or oppression. Indeed, where restraint or oppression factor in, one is living inauthentically and is encumbered from fulfilling the sexualized self.

In part 4, the contemporary chapter, Trueman takes themes from the first three parts and applies his analysis to how human autonomy seeks ever-more-creative ways to transgress sexual boundaries. Thus today’s only lingering taboo is the suggestion that any sexual-preference prohibitions retain legitimacy. Hence the mainstreaming of sexual freedom around pornography and the casting off of anthropological constraints, embodied in same-sex marriage and transgenderism. For Trueman, sexual iconoclasm is by no means an aberration stemming from no known source; it has been baked into Western culture over the last 300 years. The modern West is simply bearing the bitter fruits of a rotten tree.

Sexual iconoclasm . . . has been baked into Western culture over the last 300 years. The modern West is simply bearing the bitter fruits of a rotten tree.

All of the book’s sections build off one another’s arguments, resulting in a moral ecology where “the only moral criterion that can be applied to behavior is whether it conduces to the feeling of well-being in the individuals concerned. Ethics, therefore, becomes a function of feeling.” Trueman’s analysis here is doubtless accurate and explains other intellectual avenues, such as MacIntyre’s insistence on emotivism being our zeitgeist’s reigning moral grammar.

My criticisms of this volume are meager. Not only has Trueman written the cultural book of the year, if not the decade, but he has written arguably the most sophisticated work of Protestant social analysis since David Wells (1939–) and perhaps Reinhold Niebuhr (1892–1971) before that. With that in mind, let me confess one of the book’s weaknesses: readership. Was it written for scholars? The intended audience could stand to be honed. At more than 400 pages of philosophical and cultural analysis, it’s a volume of immense importance; I’m just fearful it could go ignored, due to its complexity, by those who should read it. This isn’t to say it’s poorly edited or dense. Neither is true. To do what Trueman has done requires the necessary space. But the publisher would do well to consider popularizing the argument in an additional, more accessible version. Pastors and laypersons need this book, but they need it condensed.

Another weakness is the relative lack of suggestions for combating Western culture’s increasing decadence. Important as they are, a mere six pages of 400 are dedicated to navigating our way out of the ruins. Trueman proposes three suggestions. First, Christians must better understand the interplay between aesthetics and formation—both within and outside the church. Here Trueman insists that moral legitimacy cannot be achieved by emotion or narrative, but by “the being of God and his act of creation.” Second, in a world of constant flux wherein liquid modernity provides ever-shifting foundations for identity, Trueman calls the church to a greater sense of community. Only this will counteract the hollowing out of institutions that more securely anchored human identity in the past. Third—and of particular importance to me, I confess—Trueman argues that Protestant Christians need greater familiarity with natural law, but not because it will necessarily convince skeptics but because it will provide grounding for a theology of human embodiment, which will counteract the transient Gnosticisms of modernity.

Sometimes there is no clearer way to put it: our culture has gone mad. But while its insanity is irrational, it’s not illogical. Trueman has convincingly shown why we are in the place we are as a culture; the next step is to demonstrate not only the moral absurdity of secular progressivism, but also the moral superiority of Christianity.

Until we can speak more convincingly of Christianity’s association with social capital and cultural flourishing, we’ll be on the defensive. And since defensiveness only works for so long, may our climb out of society’s moral nadir begin with defiant joy and wit.

The Rise and Triumph of the Modern Self is the most ambitious book that Crossway has ever published in the cultural-criticism genre.

In what I hope is not an overstatement, The Rise and Triumph of the Modern Self is the most ambitious book that Crossway has ever published in the cultural-criticism genre. I cannot recommend it enough to scholars, pastors, and laypersons. As a testament to my recommendation, it will now be required reading in every relevant course I teach.