Collin Hansen was on to something when he wrote about the “Young, Restless, Reformed” movement in his 2006 article in Christianity Today and the follow-up book two years later. He gave a name to a movement. Everyone could sense something afoot with the growing popularity of Reformed theology among (mostly) younger evangelicals. My own story wasn’t atypical: a 20-something Southern Baptist who discovered John Piper and J. I. Packer in college and then met the Puritans and reformers in seminary. I never owned the shirt, but Jonathan Edwards was my homeboy.

So I was excited when I learned of Brad Vermurlen’s book, Reformed Resurgence: The New Calvinist Movement and the Battle Over American Evangelicalism. Vermurlen is a sociologist who serves as a research associate at the University of Texas at Austin. He also describes himself on his personal website as an “ecumenical Christian traditionalist” influenced by Reformed Protestantism (among other Christian traditions). For four years, from 2012 to 2016, Vermurlen embedded himself in what he calls the New Calvinist movement and interviewed 75 key leaders from across the evangelical spectrum about the growth of Calvinism. The result is a powerhouse of a book that is narratively rich, tonally empathetic, and sophisticated in scholarship.

Though I read a fair amount of sociology, I’m not a sociologist. Neither, I assume, are most of readers who visit The Gospel Coalition website. For that reason, I’m not qualified to assess the interpretive model Vermurlen proposes to explain the resurgence of Calvinism since the mid-1990s. I leave that to specialists who’ll review this book for learned journals. For my part, I’ll do my best to summarize Vermurlen’s approach, interact with his argument, and share my personal thoughts on this important work. 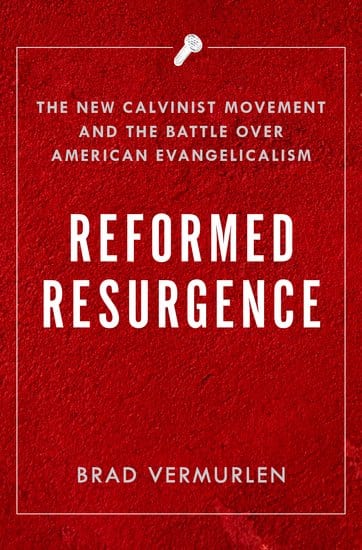 One of the most significant developments within contemporary American Christianity, especially among younger evangelicals, is a groundswell of interest in the Reformed tradition. In Reformed Resurgence, Brad Vermurlen provides a comprehensive sociological account of this phenomenon known as New Calvinism and what it entails for the broader evangelical landscape in the United States.

Vermurlen develops a new theory for understanding how conservative religion can be strong and thrive in the hypermodern Western world. His paradigm uses and expands on strategic action field theory, a recent framework proposed for the study of movements and organizations that has rarely been applied to religion. This approach to religion moves beyond market dynamics and cultural happenstance and instead shows how religious strength can be fought for and won as the direct result of religious leaders’ strategic actions and conflicts. But the battle comes at a cost. For the same reasons conservative Calvinistic belief is experiencing a resurgence, present-day American evangelicalism has turned in on itself. Vermurlen argues that in the end, evangelicalism in the United States consists of pockets of subcultural and local strength within the “cultural entropy” of secularization, as religious meanings and coherence fall apart.

Vermurlen’s book isn’t primarily concerned with historically Reformed denominations or anyone who affirms soteriological Calvinism. Rather, his focus is on the same group that Hansen first wrote about almost 15 years ago. It’s an informal network of conservative evangelicals who frequent this website, attend conferences like Together for the Gospel, podcast Matt Chandler and Al Mohler, read books written by John Piper and Tim Keller, and appreciate Edwards and the Puritans. They’re not all “Truly Reformed,” but they all consider themselves to be “Reformed-ish.”

In terms of beliefs, the New Calvinists affirm the “doctrines of grace” but identify with multiple denominational (and non-denominational) traditions. They affirm biblical inerrancy, and almost all are gender complementarians. They think of themselves as missional, though they don’t all define that word the same way. They also care about cultural engagement and value contextualization, though there is also some disagreement about these priorities. In 2016, a lot of them expressed reservations about Donald Trump’s candidacy, and many identified as “Never Trumpers.” They care about racial reconciliation, yet race has become a polarizing issue in recent years. Regrettably, some black Calvinists have distanced themselves from the New Calvinism. Most New Calvinists aren’t classic cessationists, though relatively few actually embrace the miraculous spiritual gifts in their personal lives or ministries. Vermurlen’s summaries of New Calvinist beliefs seem spot on in my experience.

A powerhouse of a book that is narratively rich, tonally empathetic, and sophisticated in scholarship.

Vermurlen attended Reformed conferences and read books about and against Calvinism. He also conducted extensive field research at three Reformed multisite megachurches: Piper’s Bethlehem Baptist Church, Keller’s Redeemer Presbyterian Church, and Mark Driscoll’s Mars Hill Church. Interestingly, Piper and Keller are now retired from their pastorates and Driscoll resigned amid scandal before his church ultimately dissolved. Some readers will bristle at the inclusion of Driscoll, but I think he’s crucial to understanding the popularity of the New Calvinism during the period under consideration, roughly 2000 to 2016. That he and several others mentioned in this book have been embroiled in scandal should be a sobering reminder to convinced Calvinists that sound doctrine alone isn’t a failsafe against temptation and sin.

Vermurlen contrasts these New Calvinists with three other groups: mainstream evangelicals (think Rick Warren and Christianity Today), neo-Anabaptists (think Shane Claiborne and the new monasticism), and progressive “evangelicals” (think Rob Bell and Emergent Village). The latter group in particular serves as a foil of sorts for the early New Calvinists, since the movements became popular at the same time and were in part responses to the same phenomena (postmodernism, the post-9/11 world, and so on). Some readers will quibble over Vermurlen’s taxonomy, as well as how he classifies certain individuals, movements, and organizations. (That mainstream category, for example, seems awfully broad.) Also, the grouping of charismatic/Pentecostal and Wesleyan evangelicals with the mainstream or neo-Anabaptists seems insufficiently nuanced. That said, I think Vermurlen understands the spectrum of self-confessed evangelicals—and where the New Calvinists fit along it.

Not That Sort of Resurgence

Vermurlen argues there has been a resurgence of Calvinism, but the increase in overall numbers isn’t as significant as many assume. Simply put, there is no massive swell of Calvinism like with early Pentecostalism. While Calvinism has evidenced growth numerically since the turn of the 21st century, so have other types of evangelical Protestants who aren’t Calvinistic. This is where Vermurlen’s “field-theoretic” model comes in. He argues that the type of resurgence the New Calvinism has enjoyed is more related to influence, debate, and boundary-marking than to numerical force. Simply put, leaders of the New Calvinism have intentionally positioned themselves as institutional power-brokers and the gatekeepers of orthodoxy among evangelicals. It’s a resurgence of influence within the evangelical movement.

Leaders of the New Calvinism have intentionally positioned themselves as institutional power-brokers and the gatekeepers of orthodoxy among evangelicals. It’s a resurgence of influence within the evangelical movement.

Some readers who are committed New Calvinists will push back against this interpretation. After all, those who are part of the movement genuinely believe their views faithfully represent biblical teaching and trust that the Holy Spirit is at work in the New Calvinist movement. In other words, the New Calvinism represents theological renewal and spiritual revival. Vermurlen doesn’t deny this might be the case. As a sociologist, though, his task is to account for non-spiritual factors that contribute to the resurgence of Reformed theology. It would be a mistake for theologically or pastorally minded readers to dismiss his scholarship as a threat, or unfaithful, or secularist.

With a nod to the Kuyperian tradition—the original neo-Calvinism!—Vermurlen is studying the New Calvinist movement from within the sphere of the social sciences. As such, he’s using analytical methods rooted in general revelation and accessible to any observer via God’s common grace. Of course, many readers will rightly detect more to the story than Vermurlen’s account; I suspect he himself believes that to be true. But there is certainly not less to the story. Rather than seeing Vermurlen’s account as a competing narrative, it’s best to see it as a complementary narrative. The takeaway should be a more holistic account of the Reformed resurgence that better integrates what we believe about the work of God and what we can demonstrate about the works of humans.

For my part, while my own theology is less consistently Calvinistic than it was a dozen years ago, the key emphases (if not always the doctrinal particulars) of the Reformed resurgence continue to resonate with me. The New Calvinism has shaped who I am in countless ways for which I’m thankful. Reading Reformed Resurgence was a window into my own faith journey. I’m grateful for the reminder of God’s past grace, the reassurance of present grace, and—with a nod to Piper—the promise of future grace.