Back in the last century when I became a journalist, the camps dividing truth from falsehood seemed to come with a bright line fixed between them. One way to describe this was the pluralistic West, with its free press and wide-open public square, versus the propagandistic Soviet Union, where even the weather was edited to serve the state.

We young reporters were warned off following the example of Walter Duranty, the New York Times reporter who won a Pulitzer for reporting “no actual starvation” in the Ukrainian countryside when millions were perishing. We cheered the example of the Guardian’s Malcolm Muggeridge, who escaped his Moscow confines to wander Ukraine, witnessing starved men and women loaded onto carts in a “diabolical” famine. Muggeridge, an atheist driven later to Christian conversion, got in some initial trouble for his reports—but that was the price for following the truth, we learned.

Today the Soviet Union is gone but newspeak and a thousand forms of disinformation thrive. I can do frontline reporting à la Muggeridge, and a reader will email to say I didn’t see what I saw because it doesn’t conform to a political narrative. She and the rest of us can fall prey to platform algorithms and manipulated content disgorged from a news cycle that never sleeps. It all leaves us in “a state of bloated exhaustion,” writes Jeffrey Bilbro in his new book, Reading the Times: A Literary and Theological Inquiry in the News. 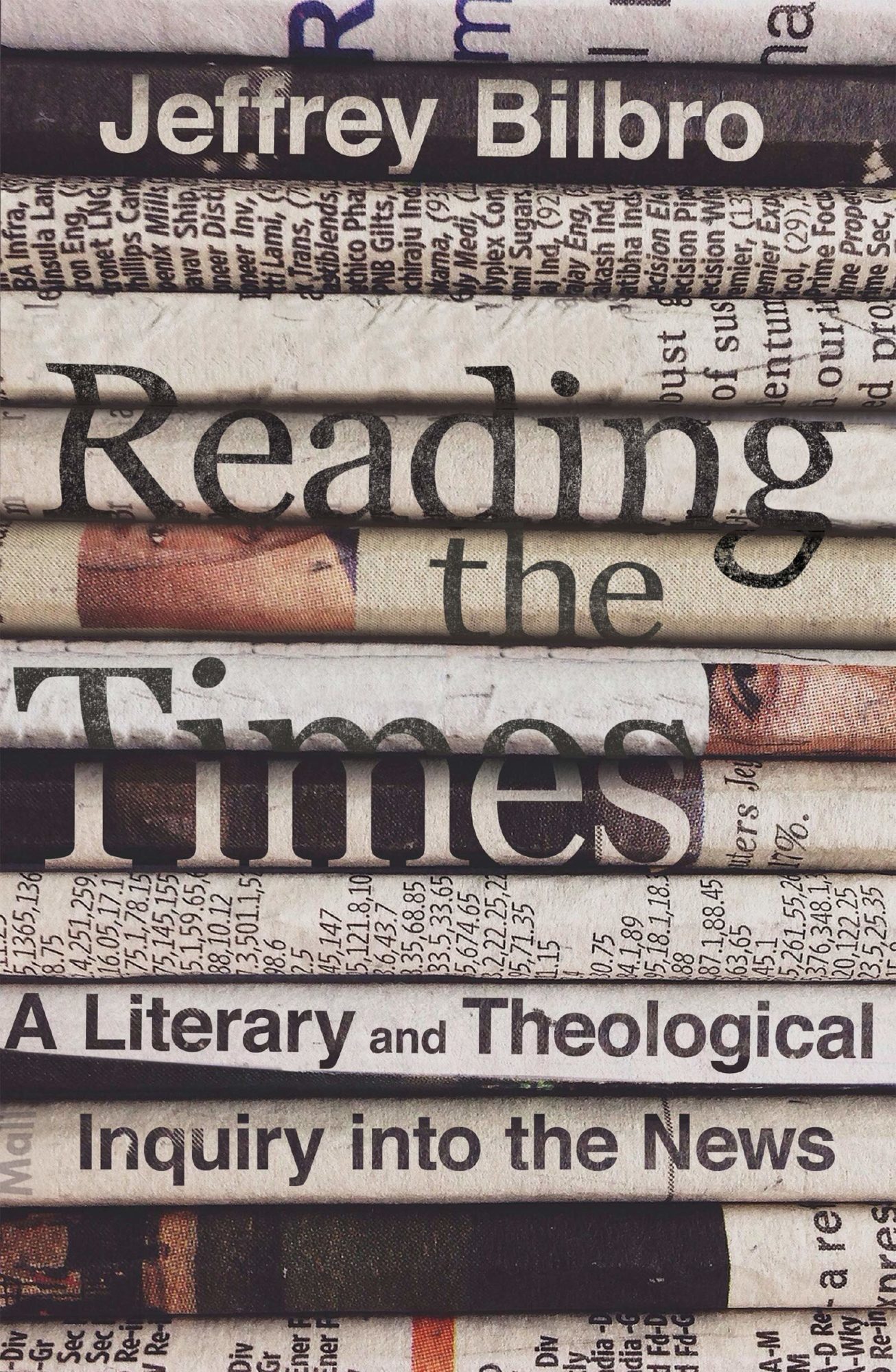 Reading the Times: A Literary and Theological Inquiry into the News

Reading the Times: A Literary and Theological Inquiry into the News

Whenever we reach for our phones or scan a newspaper to get “caught up,” we are being not merely informed but also formed. News consumption can shape our sense of belonging, how we judge the value of our lives, and even how our brains function. Christians mustn’t let the news replace prayer as Hegel envisioned, but neither should we simply discard the daily feed. We need a better understanding of what the news is for and how to read it well.

Jeffrey Bilbro invites readers to take a step back and gain some theological and historical perspective on the nature and very purpose of news. In Reading the Times he reflects on how we pay attention, how we discern the nature of time and history, and how we form communities through what we read and discuss. Drawing on writers from Thoreau and Dante to Merton and Berry, along with activist-journalists such as Frederick Douglass and Dorothy Day, Bilbro offers an alternative vision of the rhythms of life, one in which we understand our times in light of what is timeless. Throughout, he suggests practices to counteract common maladies tied to media consumption in order to cultivate healthier ways of reading and being.

When the news sets itself up as the light of the world, it usurps the role of the living Word. But when it helps us attend together to the work of Christ—down through history and within our daily contexts—it can play a vital part in enabling us to love our neighbors. Reading the Times is a refreshing and humane call to put the news in its place.

Bilbro explores our information glut with an economy of words. At 174 pages, Reading the Times draws on his teaching English in Christian universities and editing the localism webzine Front Porch Republic. He delivers an academic perspective that’s at the same time pastoral and accessible. This is practical theology we urgently need.

Consuming the news in its current form can grind our minds and our souls to bits, Bilbro contends. We need more light by which to see amid the glare that media cast on all our current moments.

Consuming the news in its current form can grind our minds and our souls to bits.

Reading the Times draws on literary figures past and present, like Henry David Thoreau, who found it “too much to read one newspaper a week.” Thoreau, writing in 1866 amid another divisive period in American history, showed the relationship between what we give our attention to and what we worship. The mind, he said, “can be permanently profaned by the habit of attending to trivial things.”

Then as now, we news consumers can fixate on matters that are shallow rather than deep, or deep but not relevant. We form opinions based on trivialities, rather than grounded in information that is both deep and relevant. We begin to report and read the news differently when habits of attention form around the eternal, not only the times at hand. As daily practice, the eternal Word of God and timeless reading in good books are better places to begin than the “top 10 ___” in our newsfeed.

Besides liturgies of attention, Bilbro helpfully lays out liturgies of time and of community that set apart Old and New Testament believers, habits to guide us through an increasingly partisan and profane Western culture.

The Christian sees time “stitched together through the events of the incarnation,” writes Bilbro, with both history and current events finding their true meaning in the light of Christ’s life. The train wreck in Taiwan, the eruption of violence in Myanmar, and the latest sexuality campaign targeting our children all require our attention, but they also sit in the shadows of the centrality of Christ’s coming. Like the prophets before us, we need “a high view of Providence and an essentially comic view of the world,” Bilbro writes, to inoculate us against the frenzy.

As our habits of time and attention focus on a public sphere accessed across a virtual plane, community becomes superficial and partisan. Communities through the ages have organized around common language and interests. But never before have they moved at so fast a clip, disembodied from their parts. The digital ecosystem is reorganizing how we belong to one another.

The digital ecosystem is reorganizing how we belong to one another.

The book’s exploration of community liturgies, of our belonging, is essential reading not only for news junkies but also for pastors and church leaders desperate to understand and heal the divisions recently sprung over politics and other news of the moment. As Bilbro writes,

When we belong less profoundly to our families, our places, and our religious traditions, we’re more susceptible to being caught up in the secular, metatopical, market-driven communities of the public sphere. Yet such forms of belonging are inadequate substitutes for thick, sustaining communities; they are better described as swarms of atomized individuals.

Atomized communities can be lonely places, feeding the need for more news, and attaching themselves to disinformation in the contested spaces of social media. Rather than belonging well to one another, we become part of the “declaration culture” highlighted by Michael Slaby in his recent book, with its “constant posture of declaring intent and truth without having to demonstrate or embody either one.”

Bilbro and his Front Page Republic writers offer needed correctives as they highlight the importance of local, embodied communities. Yet our reality is lived in a global church, culture, and economy, too. Christians have recognized this longer than anyone: Christ himself calls us to be sent people. He commissions us to go to and to know about the uttermost parts of the earth. He defines our neighbor as the Good Samaritan, who was a stranger and on a journey.

Thick, sustaining communities need news they can use, but they also need news of their wider world. The history of Western journalism (for more on that, I recommend my colleague Marvin Olasky’s Reforming Journalism) has its genesis in Christian Reformers who saw the twinned importance of spreading Scripture and journalism independent of church and state. Martin Luther not only translated the Bible into a popular vernacular, but he was also a popular writer of unshrinking reporting on issues of the day. He and other reformers didn’t shy from the morass created by the latest technology, movable type. They deployed it to good ends.

Recapturing a liturgy of Christian belonging is the hard work at the heart of Reading the Times. It’s about sharpening our mindset more than our skill set to navigate a toxic news culture. For news-weary consumers in the church, like you and me, it’s thoughtful good medicine to speed us on our pilgrimage.

Mindy Belz is senior editor for World News Group and the author of They Say We Are Infidels: On the Run From ISIS With Persecuted Christians In the Middle East (Tyndale Momentum, 2016).