My (Elliot) wife doesn’t see cars. Of course, she sees them all the time, but she doesn’t necessarily notice them. And she certainly doesn’t distinguish between Volvo and Volkswagen or between light compact and all-wheel drive. But when our family recently bought an old VW Golf, she started to notice Golfs everywhere. Mind you, it’s not that Golfs suddenly appeared on American roadways in 2020, but that she now had eyes to see what was there all along.

So it is with Scripture. And missionaries experience this phenomenon perhaps as much as anyone else. By crossing cultures and encountering new relational and social dynamics, their eyes are opened to see truths in the Bible that have always been there. This doesn’t make missionaries more spiritual; they just have another set of lenses for seeing. And in the case of Jackson Wu’s stimulating new book, Reading Romans with Eastern Eyes: Honor and Shame in Paul’s Message and Mission, he graciously offers his pair of East Asian spectacles to us, his readers.

At the outset, we should acknowledge how powerful—and potentially hazardous—this simple act is: to read Romans with a new set of eyes opens up a world of new realities. Wu—who has lived and worked in East Asia for almost two decades and serves on the Asian/Asian-American Theology steering committee of the Evangelical Theological Society—focuses especially on the dynamics of shame and honor in a relational and collectivist culture. However, as soon as we discover what our Western eyes were missing, we realize that switching prescriptions has the potential to blind us to other realities in the text. Reading the Bible with Eastern eyes is no panacea, for the Bible is neither purely Eastern nor Western.

We see what our eyes are shaped to see. In this case, we don’t appreciate, or perhaps we’re not even aware of, some significant cultural realities at work within the biblical text—and at the time of its composition.

Despite that reality, we believe Wu’s project is valid and helpful. For one, Eastern ways of thinking and relating are culturally closer to the ancient Mediterranean context of the Bible—at least in terms of a collectivist mentality and its manifestation in honor-shame dynamics. Second, it’s also true that our Western, individualistic culture, more strongly bent toward a guilt-innocence framework, combined with our history of theology (such as the Catholic-Protestant debates) have influenced our eyes with a kind of genetic predisposition. We’re near-sighted or far-sighted. We see what our eyes are shaped to see. We don’t necessarily notice what else is there. Some things appear smaller than they are, some bigger. In this case, we don’t appreciate, or perhaps we don’t even know, some significant cultural realities at work within the biblical text—and at the time of its composition. 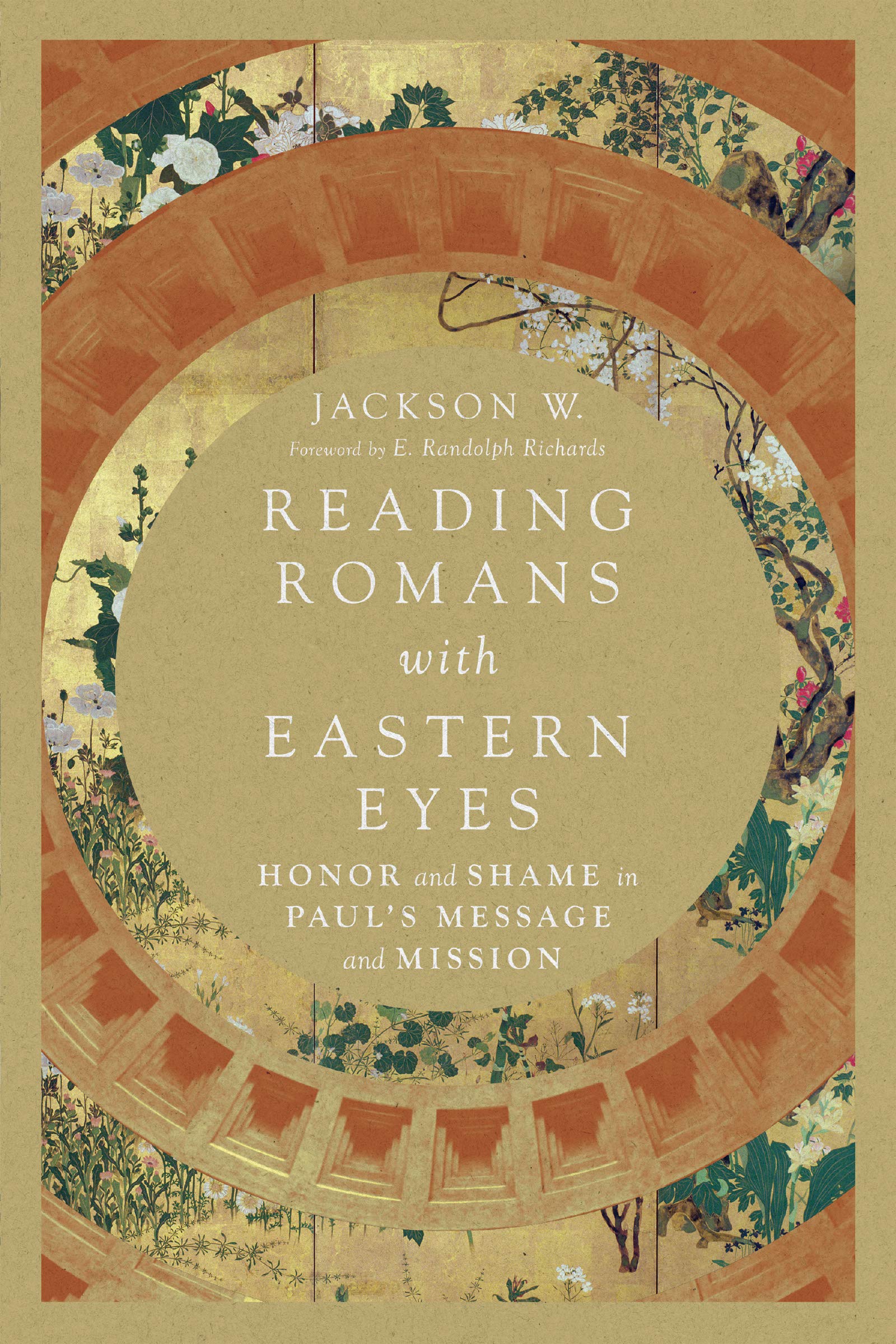 Reading Romans with Eastern Eyes: Honor and Shame in Paul's Message and Mission

Reading Romans with Eastern Eyes: Honor and Shame in Paul's Message and Mission

With respect to the book of Romans, Wu has chosen a text we might assume is most coherent within a Western, guilt-innocence framework. Yet he consistently opens our eyes to see what else is there, what we’ve perhaps never seen before. He does so, at least at certain points, with wonderful insight.

First, Wu considers how Paul frames his letter in a culturally sensitive and persuasive way. Paul uses a “high context method” of communication, saying more than his words say, in order to tactfully raise personal missionary support while simultaneously confronting the social issues of prejudice (Jew/Greek or Greek/Barbarian), grounding it all in theological exposition. Rather than quash cultural convictions that elevate one (in honor) over another (in shame), Paul demonstrates that true honor is found through the gospel (35). He motivates the Roman congregation to join him in mission as they view others differently and develop a reoriented (Christian) honor-shame perspective (37).

As the book unfolds, Wu demonstrates the pervasiveness of honor-shame dynamics in Romans. Honor is actually central to Paul’s theology, not peripheral. In Romans 1, “Shame is both the cause of God’s anger and the consequence of disregarding him” (44). In Romans 2, “Honor and shame are central to understanding the evil of ‘sin’” (47). In Romans 3, the gospel is about the vindication of God, not merely the justification of sinners. In Romans 8, the earth is groaning for the revelation of the sons of God in glory, as God fills the earth with image-bearers who reflect his character and kingship (23). In Romans 9–11 (Wu’s compelling 10th chapter), our justification is connected to the vindication of God’s honor.

Sin is heinous because it’s a shameful offense against the King who deserves our highest honor and allegiance. This resonates more in collectivist cultures that value relationship, hierarchy, and honor-shame. It also accurately represents Scripture’s witness.

For a specific example of how a renewed vision of honor might affect our theology, consider this question: What makes sin so heinous? We might answer that sin deserves eternal punishment because it’s a legal offense against an infinite God. This is absolutely true. It’s also conceptually abstract and lacks relational force. A complementary answer—also from the perspective of Romans—says sin is heinous because it’s a shameful offense against the King who deserves our highest honor and allegiance. This resonates more in collectivist cultures that value relationship, hierarchy, and honor-shame. It also accurately represents Scripture’s witness. But many Westerners just don’t see or think in this way.

Consequently, honor-shame dynamics have a direct application not only to theology but also to discipleship. Like Paul, we need not disavow honor-shame realities, even those present within our fame-focused culture. But we can and should reorient them. Furthermore, this  context should have a profound effect on our evangelism. Wu writes:

Some evangelistic presentations stress personal peace and otherworldly salvation rather than resurrection. They don’t motivate steadfast suffering since they appeal most strongly to self-preservation, explaining salvation essentially as relief from suffering. (110)

As persecution increases in the West, we need to recover a full-orbed gospel that prepares new converts for what awaits. Otherwise, as Wu warns, they won’t be able to boast in suffering so long as their “fundamental hope is personal escape from pain” (110). Instead, we should emphasize with Paul that we’re “saved for glory, not merely from punishment.”

Inasmuch as we appreciate Wu’s contribution to the church’s understanding of Romans, we do have some significant concerns. In some cases, we believe Wu has blurred theological lines specifically related to the doctrine of justification. While his primary and stated agenda is to highlight shame-honor and collectivist aspects of Romans, his secondary goal appears to be influenced by his commitment to the “New Perspective” reading of Paul.

As a result, we believe Wu conflates who is justified with how they are justified. At times the scope of the gospel eclipses the content and means of the gospel (90). Wu wants to emphasize (not without some warrant) the community identity that comes with justification. Quoting N. T. Wright, he repeatedly affirms, “Justification is all about being declared a member of God’s people” (106). But this communal focus seems to blind Wu to Paul’s ability to talk about justification in personal and individual terms as well, specifically with reference to what it actually is rather than to whom it’s applied, and particularly in the texts of Romans 3–4. (For more details, see our forthcoming fuller engagement with Wu in The Journal for Global Christianity.)

Some defenders of Wu or his perspective may now be tempted to dismiss our earlier praise for his book as shallow and insincere. Some committed to a traditional understanding of justification may now be tempted to dismiss Wu’s entire project. Both temptations should be resisted. Wu has given us many genuine insights, and they’re exactly the things that those in the Reformed evangelical world need to see—reading Wu with discerning eyes, of course.

In places throughout the book, Wu advocates for a middle way (98). He wants to enhance and balance our vision by giving us new glasses, perhaps something like bifocals. But he doesn’t always demonstrate an integrated approach. The distinctions are still too sharp. This will always be the challenge, since we’re all heavily influenced by our home or host cultures. However, we would propose a possible alternative.

Within the covenant, legal is not an alternative to relational, for the law is by its nature God’s way for us to love him and others in a covenant relationship.

For a more balanced set of reading glasses, we suggest considering the covenantal nature of God’s relationship with the world, to Jews through the law and the Gentiles through creation. Within the covenant, legal is not an alternative to relational, for the law is by its nature God’s way for us to love him and others in a covenant relationship. And neither are the individual and the communal alternatives, for the covenant relationship of a king to a people necessarily entails individual, familial, and communal responsibilities and consequences, whether blessing or cursing.

By recognizing the cultural and theological perspective of covenant—by reading with covenantal eyes—we can see God’s redemptive work as simultaneously individual and collective, relational and judicial, addressing issues of honor, innocence, guilt, and shame, under the hierarchy and rulership of the Judge, King, and Father. We believe enhancing the covenantal aspect of this discussion is a fruitful way forward.

We also believe that careful readers who don’t blindly follow Wu’s view of justification can greatly benefit from his primary objective. His theology of justification is actually peripheral and dispensable, not central and inherent, to his main thesis.

Even those who disagree, therefore, have much to learn from reading Wu’s work. This book sheds light and brings clarity to the tremendous amount of communal, relational, and honor-shame dynamics that are present and profound in the way Paul expresses the glories of Christ and his gospel within Romans. Wu helps us see what is there, and for that we are grateful.