In the political confusion of recent years, many Christian leaders have invoked Old Testament stories to make sense of contemporary issues. Some have heralded Nebuchadnezzar and Cyrus as examples of God using secular rulers for his ends. Others note David’s affair with Bathsheba, concluding that a leader’s moral failings aren’t necessarily disqualifying. Still others appeal to the story of Nehemiah as evidence that God supports building walls.

Almost invariably, such references are used to validate existing political loyalties. With his new book, The Prodigal Prophet: Jonah and the Mystery of God’s Mercy, pastor, author, and TGC vice president Timothy Keller turns this trope on its head, appealing to an Old Testament story to draw us up short and confront both our personal and corporate sins. It explores the biblical narrative of Jonah, uncovering insights that even those most familiar with the story have likely missed.

Keller acknowledges that the story of Jonah presents difficulty for modern readers. After all, who would actually believe that Jonah was swallowed by a great fish and propelled to land three days later? Surely this is a metaphor. Although Keller doesn’t take time to argue why a literal reading is best, he notes that Christians believe in an even greater miracle (the resurrection of Christ), and therefore, “there is nothing particularly difficult about reading Jonah literally” (4).

Instead of being distracted by the fish, he asks readers to focus attention on the message: “God’s love for societies and people beyond the community of believers [and] his opposition to toxic nationalism” (5)—all set under the overarching theme of God’s mercy and compassion for anyone who seeks him. No doubt for some readers, accepting this message will prove more challenging than accepting a maritime miracle.

Keller begins by presenting Jonah as “intensely patriotic, a highly partisan nationalist” (12) and suggests that his prodigal behavior was rooted in a wrongly ordered sense of identity. Keller writes, “Jonah’s relationship with God was not as basic to his significance as his race. That is why, when loyalty to his people and loyalty to the Word of God seemed to be in conflict, he chose to support his nation over taking God’s love and message to a new society” (51).

With this frame, Keller moves through the narrative, deriving insights about common grace and common good, our human tendency to idolatry, and the relationship between evangelism and social justice. 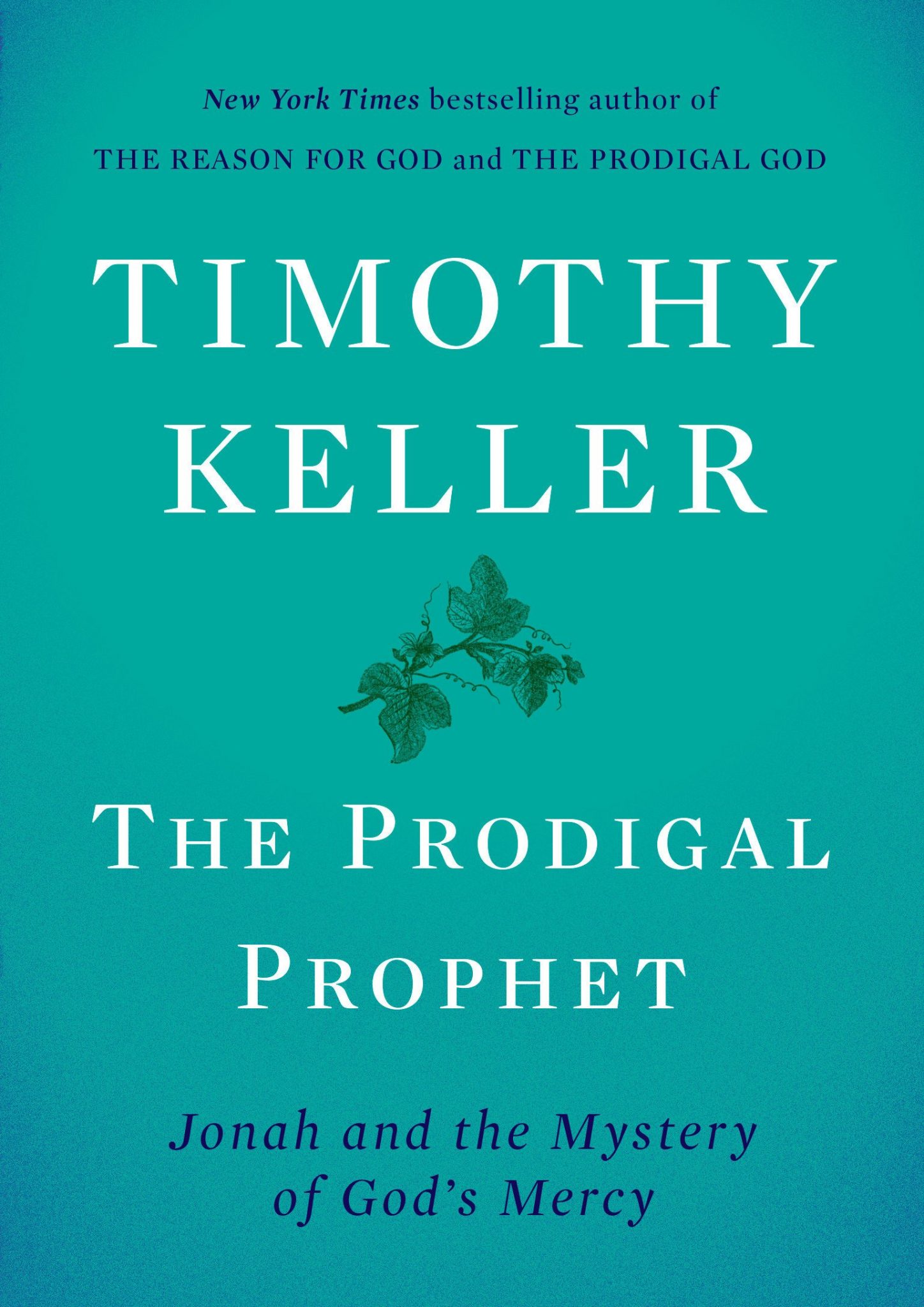 Those familiar with Keller’s work will recognize The Prodigal Prophet as quintessential Keller, resounding with themes of justice, mission, grace, and an unapologetic love for the work God does in and through cities. This makes sense given how the book came to be. Keller preached on Jonah in 1981, then in 1991, and again in 2001, each time refining and amplifying the ideas. The result is a volume that itself spans the length of Keller’s ministry, offering readers the opportunity to see the themes that have marked it in conversation with each other.

But beyond being a compendium of sorts, The Prodigal Prophet illustrates why Keller is and will continue to be a beloved author with a place beside those he so frequently quotes—authors like John Stott, A. W. Tozer, C. S. Lewis, and Martyn Lloyd-Jones. Since The Reason for God released in 2008, critics and readers have been taken with Keller’s intellectual gifts. But after a decade of published works, we’re in a position to appreciate his lasting contributions to Christian literature, specifically his ability to write timeless religious books that are accessible to the public. And this I believe will be Keller’s legacy.

When a writer attempts a book, he must often choose between writing a book that hits a contemporary issue, one that the public might deem relevant and buy because of its placement in the moment; or writing a book that industry insiders call “evergreen”—one that is not time-sensitive and maintains its appeal over decades. Somehow Keller manages to do both. He has found the ability to speak to contemporary issues without locking his books into a contemporary setting. By resisting the temptation to be too timely, his work becomes timeless.

One way Keller accomplishes this is by identifying the human problem behind our cultural sins and, in so doing, provides enough distance for the reader to make personal and cultural application himself. You will not find Keller writing about specific movements, political parties, churches, or religious leaders. Instead he writes about human behavior and our universal tendencies. He writes about sin, grace, insecurity, justice, and God’s love.

Like a good novelist who leaves room for the reader’s imagination, Keller doesn’t give us every detail of application. A good non-fiction book ignites the reader’s own process of thinking, sparking reflection and personal growth. The challenge is to write specifically enough to guide the reader but not so specifically so as to remove responsibility from her. Give too many illustrations or points of application and you’ll inhibit this process. Give too few and the process never starts.

From my perspective, Keller has mastered this balance, writing in a way that leaves sufficient space for both the reader and also the Holy Spirit.

Keller has also mastered the art of writing about spiritual realities without a hint of conspicuousness. He doesn’t give any indication that he believes he’s doing something special with his writing. He doesn’t shy away from religious language or apologize for citing theological concepts. Lesser Christian writers, on the other hand, are far too self-aware in their roles as  “Christian” writers. Buying into the notion of a sacred/secular divide, they quickly succumb to either insider “Christanese” or make such profuse apologies for using religious language as to make you wonder whether they believe themselves.

But Keller writes with a religious straightforwardness that undercuts our professed secularism. He knows that humans are religious beings and speaks to his readers in ways that are natural to them, even if they haven’t yet learned their native tongue. He respects them enough to address them with theological language when they’re reading a theological work. And so he unflinchingly and convincingly parses ideas like substitutionary atonement, divine judgment, and God’s grace as if they were well within his readers’ capacity. Which, of course, they are.

Despite my profound appreciation for Keller and The Prodigal Prophet, I do have one point of concern. In discussing how God’s self-sacrificial love calls us to self-sacrificial love, Keller attempts to answer the objection that this teaching might enable abusive or exploitative relationships. He argues that this misunderstands the nature of self-giving love, countering that

[A]llowing someone to exploit you or sin against you is not loving them at all. . . . Some people do indeed allow themselves to be browbeaten and used, for many psychologically toxic reasons under the guise of being “self-giving.” In reality it is selfish, a way to feel superior or needed. To say that self-giving love must lead to abuse and oppression is to misunderstand it entirely. (149–50)

Keller is correct that we often misunderstand the nature of self-giving love and fail to see how it calls those we love to repentance. But just as often we misunderstand the nature and dynamics of abuse, including how abusers lure and trap their victims. And this is where Keller’s greatest strength—his ability to leave space for the reader’s own thought process—becomes a weakness when handling sensitive contemporary questions like abuse.

By relying on readers to “fill in the gaps,” Keller’s explanation is only as good as the individual reader’s knowledge of abuse dynamics. And given our general ignorance, readers are unlikely to distinguish between abusive relationships and codependent ones. It’s entirely possible they’ll read this paragraph as suggesting that those who suffer abuse somehow enable it out of a desire to “feel superior or needed.”

But Keller would never argue that those suffering under systemic racism or an unjust marketplace are at fault for “allowing” their oppressors to exploit or sin against them. Instead, he consistently argues that we must pursue justice, fight oppression, and free those captive to it. Within this book itself, Keller challenges those who attempt to transcend conversations about injustice and “simply preach the gospel.” Those who sit on the sidelines, he says, end up enabling injustice.

So if Keller generally understands the dynamics of oppression, why even bring this up?

It’s essential that Christians understand the nature of abuse, especially those who are charged with caring for the souls and lives of other. Pastors and counselors reading The Prodigal Prophet shouldn’t read this section as a diagnostic and attempt to apply it the next time a woman or man in an abusive relationship comes to them for help. Those subjected to abuse shouldn’t be seen as selfish for being unable to escape it. The guilt of exploitation rests squarely and unequivocally on the abuser.

One of the dominant themes in The Prodigal Prophet is God’s patience with us as we grow in our understanding of both grace and justice. Keller writes,

We learn from Jonah that understanding God’s grace—and being changed by it—always requires a long journey with successive stages. It cannot happen in a single cathartic or catastrophic experience (like being swallowed by a fish!). (109)

Keller rightly argues that just as God had compassion on Jonah and the Ninevites, he has compassion on us as we travel our own journey to understanding grace. And this is perhaps the most countercultural message of the book of Jonah. Unlike human beings who demand immediate justice (as they define it), God patiently guides our halting steps as we move toward mercy, justice, and truth. He is patient with Jonah. He is patient with the Ninevites. He is patient with us. His mercy is so kind and so good that he extends it to human beings even when we don’t extend it to each other, and in so doing, makes us kind and good as well.

The mercy of God is greater than our prodigal ways. After all, Keller reminds us with his last words, “If [God’s mercy] can change Jonah, it can change anyone. It can change you.”

Hannah Anderson lives with her family in the Blue Ridge Mountains of Virginia where her husband, Nathan, pastors Brookhill Baptist Church. Hannah is the author of several books ,including Humble Roots: How Humility Grounds and Nourishes Your Soul and the newly released All That’s Good: Recovering the Lost Art of Discernment. You can find more of her writing at sometimesalight.com, hear her on the weekly podcast Persuasion, or follow her on Twitter.