Like most people raised in a churchgoing home, I’ve been aware of the story of Jonah since childhood. As a minister who teaches the Bible, however, I’ve gone through several stages of puzzlement and wonder at this short book. The number of themes is a challenge for the interpreter. It seems to be about so many things.

Is it about race and nationalism, since Jonah seems more concerned over his nation’s military security than over a city of spiritually lost people? Is it about God’s call to mission, since Jonah at first flees from the call and later goes but regrets it? Is it about the struggles believers have to obey and trust in God? Yes to all those—and more. A mountain of scholarship exists about the book of Jonah that reveals the richness of the story, the many layers of meaning, and the varied applicability of it to so much of human life and thought. 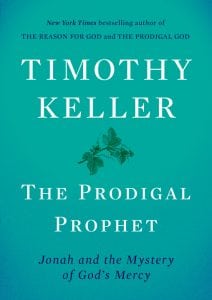 I discovered that “varied applicability” as I preached through the book of Jonah verse by verse three times in my ministry.

The first time was at my church in a small, blue-collar town in the South. Ten years later I preached through it to several hundred young, single professionals in Manhattan. Then, a decade later, I preached through Jonah on Sundays immediately after the 9/11 tragedy in New York City.

In each case the audience’s cultural location and personal needs were radically different, yet the text of Jonah was more than up to the task of powerfully addressing them. Many friends have told me over the years that the particular Jonah sermons they heard were life-changing.

The narrative of Jonah seduces the reader into thinking of it as a simple fable, with the account of the great fish as the dramatic, if implausible, high point.

Careful readers, however, find it to be an ingenious and artfully crafted work of literature. Its four chapters recount two incidents. In chapters 1 and 2 Jonah is given a command from God but fails to obey it; and in chapters 3 and 4 he is given the command again and this time carries it out. The two accounts are laid out in almost completely parallel patterns. 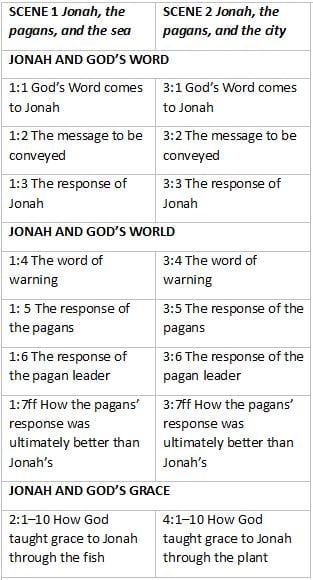 Despite the literary sophistication of the text, many modern readers still dismiss the work because the text tells us that Jonah was saved from the storm when swallowed by a “great fish” (Jonah 1:17). How you respond to this will depend on how you read the rest of the Bible. If you accept the existence of God and the resurrection of Christ, a far greater miracle, then there is nothing particularly difficult about reading Jonah literally. Certainly many people today believe all miracles are impossible, but that skepticism is just that—belief that itself can’t be proven. Not only that, but the text doesn’t show evidence of the author having made up the miracle account. A fiction writer ordinarily adds supernatural elements in order to create excitement or spectacle and to capture reader attention, but this writer doesn’t capitalize on the event at all in that way. The fish is mentioned only in two brief verses, and there are no descriptive details. It’s reported more as a simple fact of what happened. So let’s not get distracted by the fish.

The careful structure of the book reveals nuances of the author’s message. Both episodes show how Jonah, a staunch religious believer, regards and relates to people who are racially and religiously different from him. The book of Jonah yields many insights about God’s love for societies and people beyond the community of believers; about his opposition to toxic nationalism and disdain for other races; and about how to be “in mission” in the world despite the subtle and unavoidable power of idolatry in our own lives and hearts.

Grasping these insights can make us bridge-builders, peacemakers, and agents of reconciliation in the world. Such people are the need of the hour.

Yet to understand all of these lessons for our social relationships, we have to see that the book’s main teaching is not sociological but theological. Jonah wants a God of his own making, a God who simply smites the bad people and blesses the good people, for instance, Jonah and his countrymen. When the real God—not Jonah’s counterfeit—keeps showing up, Jonah is continually thrown into fury or despair. Jonah finds the real God to be an enigma, because he can’t reconcile the mercy of God with his justice.

The book’s main teaching is not sociological but theological.

That question isn’t answered in the book of Jonah. As part of the entire Bible, however, the book of Jonah is like a chapter that drives the Scripture’s overall plotline forward. It teaches us to look ahead to how God saved the world through the one who called himself the ultimate Jonah (Matt. 12:41) so that he could be both just and the justifier of those who believe (Rom. 3:26). Only when we readers fully grasp this gospel will we be neither cruel exploiters like the Ninevites nor Pharisaical believers like Jonah, but rather Spirit-changed, Christ-like women and men.

Many students of the book have noticed that in the first half Jonah plays the “prodigal son” of Jesus’s famous parable (Luke 15:11–24), who ran from his father. In the second half of the book, however, Jonah is like the “older brother” (Luke 15:25–32), who obeys his father but berates him for his graciousness to repentant sinners. The parable ends with a question from the father to the Pharisaical son, just as the book of Jonah ends with a question to the Pharisaical prophet. The parallel between the two stories, which Jesus himself may have had in mind, is the reason why I titled my new book, The Prodigal Prophet.

Reprinted with permission from The Prodigal Prophet: Jonah and the Mystery of God’s Mercy, by Timothy Keller. Published on October 3, 2018 by Viking, an imprint of the Penguin Publishing Group, a division of Penguin Random House LLC. Copyright © Timothy Keller, 2018.

3 Meme-ing Ourselves to Death

5 What Small Churches Teach Us About Meaningful Membership