If there is one thing that stands at the center of our current political chaos and drives the increasingly unpleasant social rhetoric, it’s surely identity politics. While it’s hard to define this term with precision, it can perhaps be best characterized as the politics that emerges when the traditional foundations of identity (nation, religion, economic class, and family) are either in a state of flux or rapid decline and have been supplanted by other categories (race and sexuality being the two most obvious and influential at this moment in time).

It’s this topic which Mary Eberstadt, senior research fellow at the Faith and Reason Institute in Washington, D.C., addresses in her latest book, Primal Screams: How the Sexual Revolution Created Identity Politics. Readers of her earlier work will be familiar both with her approach (she is convinced that sexual liberation, particularly as facilitated by the widespread availability of contraception, lies at the heart of modern ills) and also her style (she writes with clarity and without rancor). This book is thus vintage Eberstadt: clearly argued with conviction.

Her basic thesis is simple: The sexual revolution of the 1960s irreparably damaged the traditional family and left people adrift in terms of who they considered themselves to be, and that same sexual revolution then provided key categories by which new identities and new ways of belonging to something larger might be realized. One might recast her argument to say that the sexual revolution created a problem to which it then proposed itself as the solution.

In this sense the book is a response to Mark Lilla’s The Once and Future Liberal. Lilla himself is one of three writers—along with Rod Dreher and Peter Thiel—who offers thoughtful reflections on Eberstadt’s argument at the end, and he concedes the point that his book had only dealt with the supply side of the problem (how the liberal vision had fractured and fragmented) and not with the demand side (why so many young people seem to crave the politics of identity). 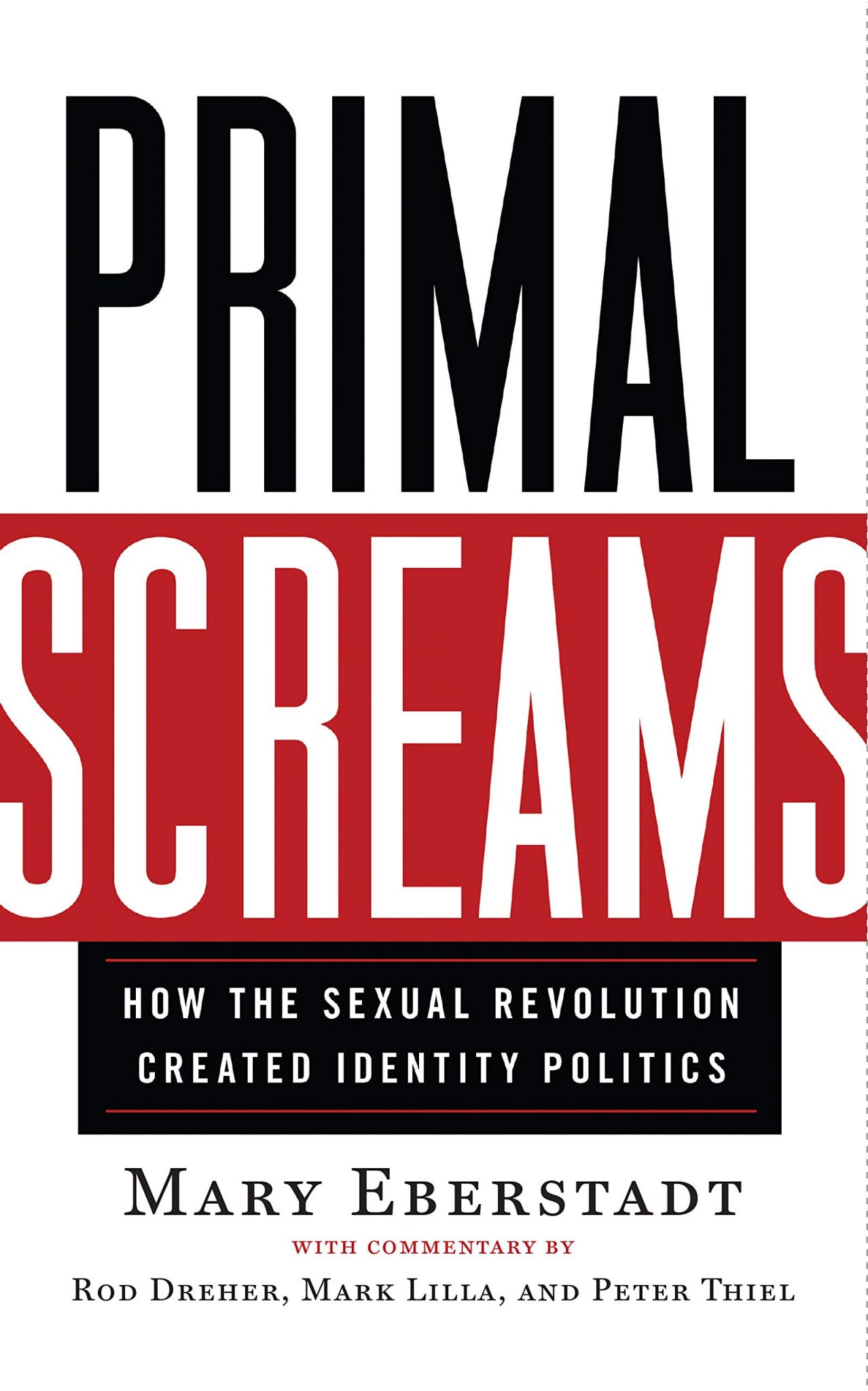 Eberstadt’s work isn’t a collection of abstract reflections on the problems she addresses. Her arguments are carefully documented with empirical data and examples. She notes, among other things, the shifting attitude among feminists toward pornography, the ambiguities of the sexual revolution for women, the effect of androgyny, and the rise of public crudity, in each case attempting to trace the problem back to the collapse of the family.

Sexual Revolution: Cause or Symptom?

In general, I’m in sympathy with her basic case, but two areas need to be addressed. The first is the fact that the sexual revolution is itself as much a symptom as it is a cause of the modern malaise. At various points in her argument, Eberstadt acknowledges the role of other broader factors that provide the context and much of the driving force behind the sexual revolution. Technology is of critical importance in numerous ways—for example, as Eberstadt notes, in making contraception easily available and also in revolutionizing the consumption and status of pornography.

I would add that it also makes androgyny more plausible—a point Marx and Engels made in the Communist Manifesto when they reflected on the effect of mechanization on industrial labor and which later feminists, notably Simone DeBeauvoir and Shulamith Firestone, both developed in their arguments for feminist liberation. One of the lacunae of Eberstadt’s book is that it doesn’t address the way our material condition shapes the cultural imagination and changes notions of what is plausible and desirable. That wouldn’t be so noticeable if so much weight wasn’t placed on the collapse of the family as the primary cause of identity politics. It’s more complicated than that, as Eberstadt acknowledges, but her acknowledgment seems more like an exercise in throat-clearing than a genuine qualification of the central thesis.

The sexual revolution is itself as much a symptom as it is a cause of the modern malaise.

A further problem that needs to be faced is that the things that conservatives approve in society are often related in complicated and inextricable ways to the things we abominate. The technology that brings cheap abortifacients also brings cheap medicines that heal; the internet that brings us pornography also brings things that most would regard as positives—from the ability to keep in touch with distant friends to the ability to obtain decent British tea in western Pennsylvania (surely a basic foundation of civilized society); and the feminism that brought us Judith Butler and transgenderism also made us aware of how women often have been treated as pieces of property.

Can we have the good without having the bad? Or, to be more nuanced, can we have the good without at least a significant risk of the bad? Eberstadt is careful to resist the narcissistic temptation to make the book a lament, but neither does she point the way forward. How can she when the problems she rightly recognizes and astutely analyzes are themselves not easily separable from other things that do much good?

That brings me to my second area of criticism: Eberstadt doesn’t articulate an underlying anthropology that explains the success of the sexual revolution in particular and identity politics in general. She does point to the need that people have to belong, but why is this done through the various idiomatic identities we now have—sex and race? Part of the answer to that is historical, and Eberstadt is good on that.

But another part is anthropological. Whether as an atheist one goes with Sade, Nietzsche, and Freud, or as a Christian with Paul and Augustine, the answer to the current identity chaos is surely that human beings have a deep, dark, and destructive side that takes pleasure in dominating others, however defined, through sexual excess or cultivating feelings of superiority. It’s not just a need to belong that drives us; it’s also the need to assert ourselves, to feel superior, to negate others. Sex and violence have always been the obvious ways to do that, and technology and 300 years of expressive individualism—and the collapse of old forms of identity in their wake—have opened the way for our darker instinct to find public expression and cultural sanction.

This, in turn, goes to the heart of what Nietzsche saw as ressentiment, and it helps to explain why, as the traditional foundations for identity fracture and break apart, these new identities are emerging in the aggressive and snarling manner we now see. Whether we look at sexual politics or racial politics, and however legitimate the original grievances they seek to address, one obvious aim is to invert the old hierarchies in the quest to make “us” feel superior to “them.” The idioms for doing such are historically conditioned; the basic ambition is a function of the human heart.

What we need isn’t simply a sociology of identity but an analysis of the deeper psychological and anthropological dimensions of the human condition. The world of strong nation states, religious observance, and stable families was no Nirvana, as history demonstrates only too well. They too had their therapeutic aspects. The answer isn’t a return to the old ways of doing things; that would simply be to exchange one set of problems for another; it’s to confront what the poet Yeats described as “the foul rag and bone shop of the heart.”

The above comments should be read as supplemental questions, not as major criticisms of Eberstadt. This is a good and helpful book, and the responses of Dreher and company are thought-provoking and constructive. It’s a good example of intelligent discussion in a world too dominated by the banal self-promotion, casual nastiness, and cheap identity politics of Twitter. And Eberstadt’s choice of “primal scream” is certainly a useful analogy, because it captures the irrational nature and intensity of identity politics.

But it also captures something Eberstadt doesn’t emphasize, yet which is essential to the modern political project: the therapeutic quality of identity politics. Identity politics is therapeutic politics because it allows any self-identified group to blame others for its misfortunes, to see its own weaknesses as a sign of its inherent virtue, and to foster thereby a feeling of innate superiority.

And herein is the truly delightful aspect of Eberstadt’s book: by avoiding the Ciceronian cry of O tempora! O mores! she avoids the trap of making her own analysis a form of therapy for conservatives. Eberstadt’s greatest strength is her consistently calm and compassionate tone. As such, she offers us a model for how political discussion should be pursued in this angry, fractious political age.