“If anyone else wants to live this life I’ve created for myself, they’re more than welcome to try. But I’m done. I need a new way to live.”

This is the state of Shauna Niequist’s mind in the opening scene of her new book of memoir-style essays, Present Over Perfect: Leaving Behind Frantic for a Simpler, More Soulful Way of Living.

Niequist—author of Cold Tangerines, Bittersweet, Bread and Wine, and Savor—sets out to describe and reflect on a three-year process in Present Over Perfect, calling it “the single most profound life change I’ve yet encountered.” She shed obligations, misconceptions, and belongings that had overwhelmed her life. The book promises to lead us through this process, helping us discover the same peaceful lifestyle and self-acceptance she’s currently enjoying.

“If I’m honest, I let words like responsible and capable govern many of my years,” Niequist says. “And what good are they? Words that I’m choosing in this season: passion, connection, meaning, love, grace, spirit.”

This Zondervan release debuted at number two on The New York Times advice and how-to bestseller list in August, as well as number one in Publishers Weekly andThe Wall Street Journal, and number eight on USA Today’s list. Since August, it has sold more than 60,000 copies. The book is endorsed by authors like Donald Miller and Jen Hatmaker, with an introduction by Brené Brown. Niequist spoke at the Global Leadership Summit as part of the book release and is currently a headliner on The Belong Tour, a live event marketed to women in 12 major areas this fall.

The wide appeal of Present Over Perfect, as well as its implicit assumption about its readers, should tell us something: American women are both tired and hungry.

Throughout the book’s meandering essays, Niequist describes herself repeatedly in these terms. She’s tired of being in over her head, tired of being on the road, tired of feeling like she has to keep pumping along in order to earn her place in the world. She’s also hungry—hungry for connection, hungry for meaning, hungry for peace and real fulfillment. 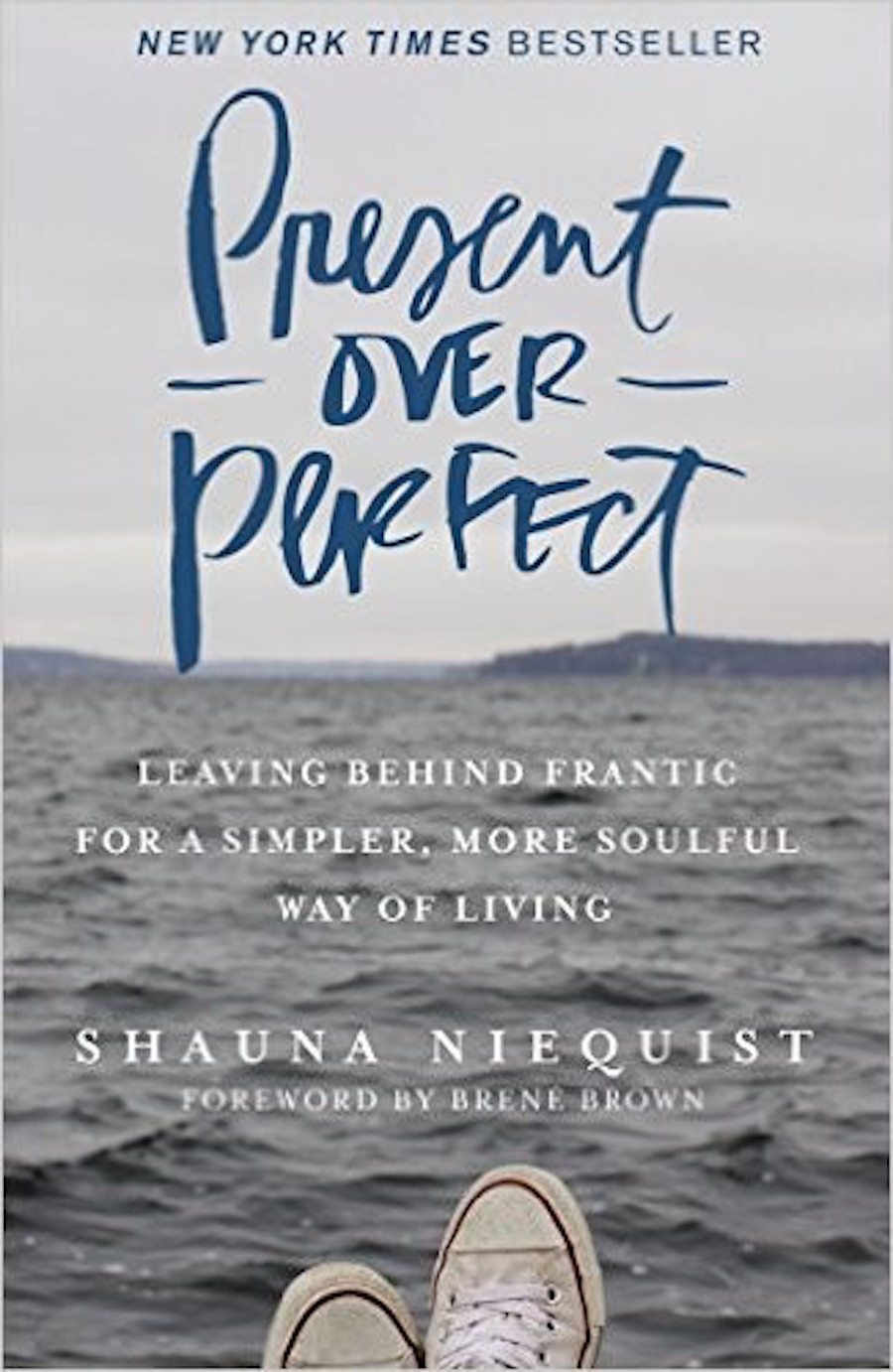 Present Over Perfect: Leaving Behind Frantic for a Simpler, More Soulful Way of Life

Present Over Perfect: Leaving Behind Frantic for a Simpler, More Soulful Way of Life

The fact she can write with the assumption her readers feel the same way—despite the fact that few of them have ever been full-time writers and traveling speakers—should tell us something. They seem to agree with her. Evangelical women are turning out in droves for The Belong Tour, running up blog numbers, and keeping books like this one (see Jen Hatmaker’s For the Love [review]) on bestseller lists.

What We Can Learn

In the first chapter, Niequist diagnoses her root sins more clearly than at any other point: gluttony and pride. Gluttony has caused her to keep saying “yes” to experiences and commitments even when she’s already overwhelmed. Pride has caused her to believe she can handle more than humans were meant to handle.

Her response throughout is to generally simplify and slow down. Watching her say “no” to things is helpful to us. If she can turn down a major career opportunity, surely we can say “no” to that extra work project, or to letting our kids join another sports league.

She’s not prescriptive, really, and not even overly descriptive. Besides a few work commitments, and cleaning out some extra clothes and dishes that were cluttering her house, we’re never given a lot of detail about what she’s doing differently. But she does talk about taking trips to a favorite lakeside spot with her family, spending time in nature more deliberately, praying with more honesty and less of a sense of duty, and spending more money on trips and less money on stuff.

“What’s changing everything for me is a new understanding that we get to decide how we want to live,” she writes. “You can live on a farm or out of a backpack. You can work from your kitchen or in a high-rise . . . isn’t that beautiful? And exciting? And so full of freedom?”

One can see how these ideas would be attractive to the tired American woman, religious or irreligious. It’s full of permission to start slowing down and stop feeling guilty about it.

The spiritual dimension of Present Over Perfect deals mainly with the feeling of inadequacy and self-loathing Neiquist struggled with even during the height of her career.

“What if all my life I’ve been trying to walk with a Jesus who reprimands me while I’m drowning and grabs me at the last second, rolling his eyes? No wonder I don’t tell him when I’m scared or fragile,” she writes. This new way of thinking, she says, allows her to see God as a rescuer who delights in rescuing.

What We Can Ask Ourselves

Niequist’s newfound peace feels somewhat tenuous. One wonders how long she’ll be able to keep up this practice of slowing down (after all, she’s back on the speaking circuit even now). One wonders whether her vision of God as rescuer has been soaked in Scripture long enough to be swallowed, digested, and operative in the long term. Her language is often vague, such that it isn’t offensive to the unchurched or moderately churched.

Anyone who believes Scripture is the most transformative meat for the hungry, tired stomach is going to wonder whether this particular book will offer any long-term relief.

Niequist gets so close to addressing her problems with gluttony and pride at the beginning, but she doesn’t seem willing to return to these again, choosing instead to focus on the fact she was leaving her “truest self” behind in favor of what others wanted her to be. Not only does this feel like a loss of logical thread, it also feels like we’re watching the issue slip right out of her hands. In fact, it feels like a loss of the gospel message itself.

So at the end of this book, one should ask: What can I take away from Niequist’s experience that will help me to prioritize my life in a godly way? Am I neglecting times of quiet with my Savior and with my family because it’s simply too hard to say “no” to other things? Am I getting mixed up about what my responsibilities are in God’s economy, and what they aren’t? What are the things about God I can dwell on, pray about, and read that will reinforce this message of slowing down—yet in a way that gives me full biblical comfort?

Hungry for Something Better

Clearly, this book and others like it strike a chord, and the church as a whole needs to ask itself honest questions about what women are finding so needful about them. Why are they feeling so unable to stop, and so inadequate for the imaginary tasks they’ve set for themselves? Are books like these actually helping? What can we be doing better to present a God who provides women the motive they need to continually give up all other striving in the pursuit of his worth?

The Christian publishing industry should also ask some questions about whether books like these—contemplative, personal volumes of essays—could be produced by some of our stronger, more biblically driven writers. As a woman who values many styles of writing but wants to feel theological muscle beneath the words of my favorite Christian writers, I would be overjoyed to see the marriage of these two generally separate approaches in Christian publishing.

And something tells me all these tired and hungry American women would also be well served by such a marriage.