Francis Beckwith is currently an associate professor of Church-State studies at Baylor University. In 2005 he was elected president of the Evangelical Theological Society. Two years later, he converted to Roman Catholicism and resigned. With degrees in philosophy and law, Beckwith has written a great deal on the nexus between church and state.

Politics for Christians: Statecraft as Soulcraft (part of IVP’s Christian Worldview Integration Series) is written for college students. “My purpose,” writes Beckwith, “is to introduce the college student to politics by way of a few issues and questions that should be of concern to contemporary Christian citizens in liberal democracies” (39).

In these pages, Beckwith argues that because morality is at the heart of society, explicitly Christian arguments should be made and welcomed in the public sphere. After an introductory chapter examining what it means to study politics, Beckwith gets to the meat of the book. First, he argues that Christians are obligated to work for the common good. In that sense, they should be Christian citizens. Second, he argues that the First Amendment is in place to protect religious liberty, which includes granting Christians the freedom to make a religious case for their policy views. Third, Beckwith argues that there is no such thing as a neutral state. Advocates of secular liberalism are, in reality, sectarian since secular liberalism “presupposes and entails its own understanding of liberty and the human good that answer precisely the same philosophical questions that the so-called sectarian views answer” (143). This is a great chapter-clear, concise, helpful for someone tempted to leave faith out of policy decisions. Finally, he argues that the very existence of the “common good” is overwhelming evidence for the existence of God.

Like Richard John Neuhaus in The Naked Public Square, Beckwith helpfully strips away the misguided notion that religious motivations ruin the intellectual credibility of political and legal arguments. Furthermore, he is right to call for an integration of these two spheres since, as Don Carson has shown in Christ and Culture Revisited, Christians particularly struggle to understand what faith means for life outside the four walls of the church meeting-house. Finally, given how many books are pushing Christians into social activism-Kathleen Kennedy Townsend, Failing America’s Faithful (Warner Books, 2007); E. J. Dione Jr., Souled Out (Princeton, 2008); Jim Wallis, The Great Awakening (Harper One, 2008)-it is nice to have a work pressing young people to defend the sanctity of marriage and every human life.

Still, I have two concerns.

First, it is not sufficient to argue, as Beckwith does, that Christians deserve a hearing in the public square. At the dawn of American history, most Christians did not have to fight to be heard. Society welcomed a Christian worldview. There was general agreement that for America to succeed (politically, economically, socially) it needed to be virtuous and, to be virtuous, America needed a religious foundation. “America” was not the king or the president, but the people. This explains why, printed outside the governor’s office in the Oregon State Capitol, could be found words that may seem out of place today:

In the souls of its citizens will be found the likeness of the state which if they be unjust and tyrannical then will it reflect their vices but if they be lovers of righteousness confident in their liberties so will it be clean in justice, bold in freedom. 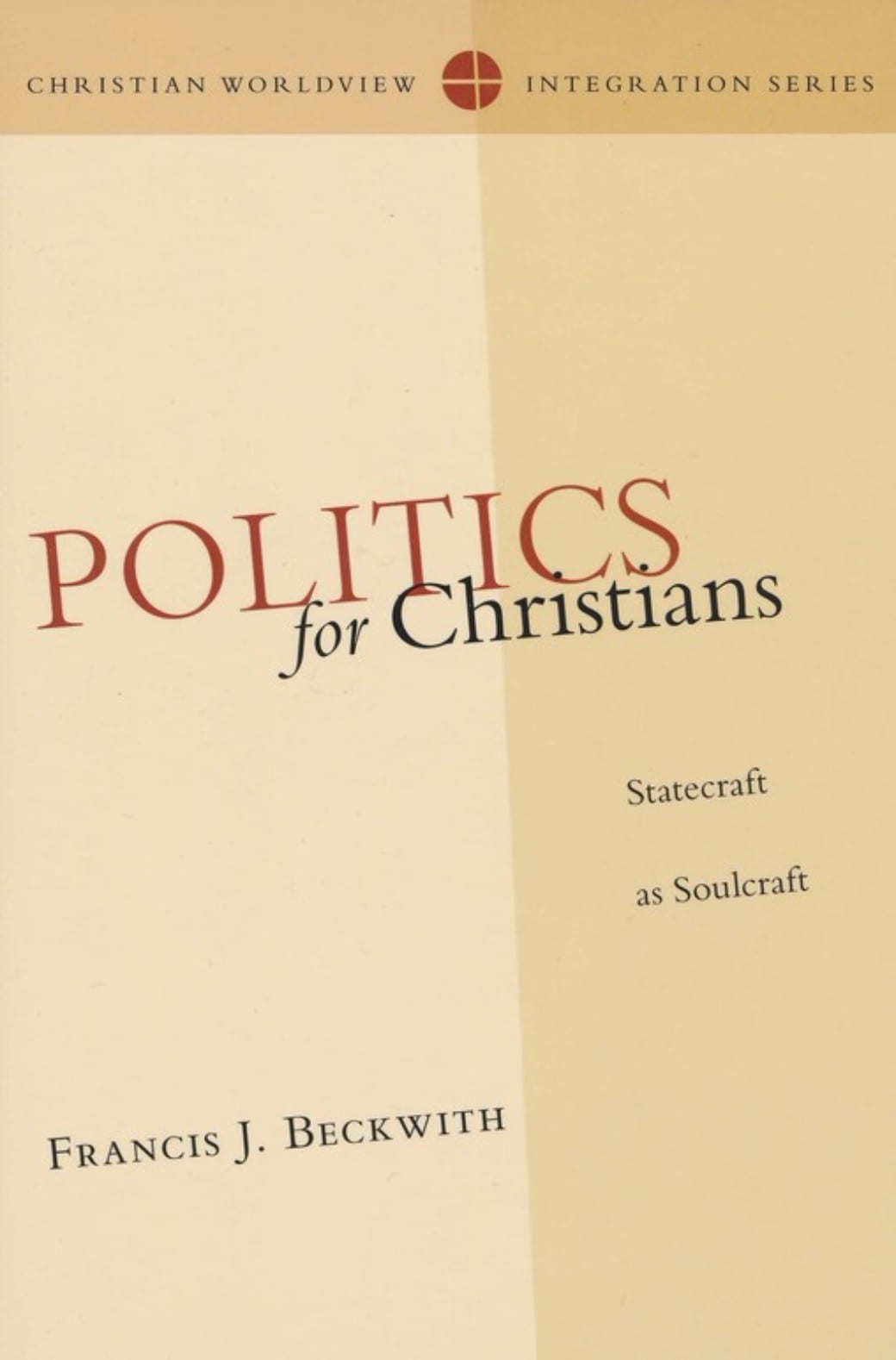 Politics for Christians: Statecraft as Soulcraft

Politics for Christians: Statecraft as Soulcraft

Politics is concerned with citizenship and the administration of justice—how communities are formed and governed. The role of Christians in the political process is hotly contested, but as citizens, Francis Beckwith argues, Christians have a rich heritage of sophisticated thought, as well as a genuine responsibility, to contribute to the shaping of public policy. In particular, Beckwith addresses the contention that Christians, or indeed religious citizens of any faith, should set aside their beliefs before they enter the public square.

Rarely will the policies of a nation rise above the standards of the people. Even if Christians win that hearing in the public square, of what good will it be unless the citizens themselves are “lovers of righteousness”? If the Christian college students of today are going to be the leaders of tomorrow, they have to deal with this question. Some of the most important avenues of political activism have very little to do with the Supreme Court and everything to do with the court of public opinion. To my regret it is a topic that Beckwith either ignored or, more likely, deemed outside the purview of his project. Nonetheless, I think it is an issue that must be dealt with in an introduction to politics written for Christians.

Second, Beckwith underestimates or assumes the power of the gospel to change lives and world-views. This is a dangerous omission. At the heart of Christian action-whether it is social, political, or economic-is the gospel. A person is changed by the redeeming work of Jesus Christ. Such a change is the work of the Holy Spirit wrought in the heart of one who repents and believes the gospel (Mark 1:15; 1 Peter 2:24). Society may change as a result of this personal transformation, but there is no guarantee that one conversion or even an amalgamation of conversions will reform political or social structures, laws, policies, executive orders, etc. But it is good and godly to try!

But Beckwith appears unconvinced that the gospel is first and foremost about personal salvation. After describing several texts that do indeed demand sacrifice and mercy on the part of believers, he reaches this stunning conclusion: “It seems then that the Christian gospel is as much about getting heaven into people as about getting people into heaven” (66). I want to be sympathetic. Beckwith simply wants us to understand that Christians must engage the world. The Bible demands it. Yet, the implications of broadening the definition of the gospel to include “getting heaven into people” will ultimately harm political activism. Political movements that fail to gain traction may lead some to think the gospel has failed. What happens if same-sex marriage is legalized in every state, and if abortion continues to be protected? Has the gospel failed? Of course not! But this is because the gospel is not about getting heaven into the people and is about getting people into heaven. Beckwith does not make this clear and in a book entitled, Politics for Christians, he should.

Let me be clear. I am very thankful for men and women who promote the common good regardless of their motivation. But motivation is important, and a work entitled Politics for Christians should make it clear how the gospel relates to Christian citizenship. Otherwise, it might as well be called Politics for Everyone.