Do not read this book if you’re homesick.

Do not read this book if you’re homesick because you’ve been gone too many days and you’re on a plane, or a train, or anywhere in public, and you’re mortified at the thought of crying in front of strangers.

Do not read this book if your soul is pierced by slow-paced narratives, the mysteries found in ordinary things, and prose as sharp and clear and laden with weight as icicles formed by countless winter days.

Do not read this book if you’re prone to nostalgia for simpler, if harder times.

Perhaps, on second thought, these are precisely the conditions under which you should read Marilynne Robinson’s stunning novel Housekeeping.

Published in 1980, nominated for the Pulitzer Prize, and garnering the prestigious PEN/Hemingway Award, Robinson’s first novel is a modern classic. Yet now Robinson is better known for her more recent novels, Gilead and Lila [review], and for her philosophical and theological treatise Absence of Mind, a skillful salvo aimed at the shallow scientism popularized by the New Atheists. 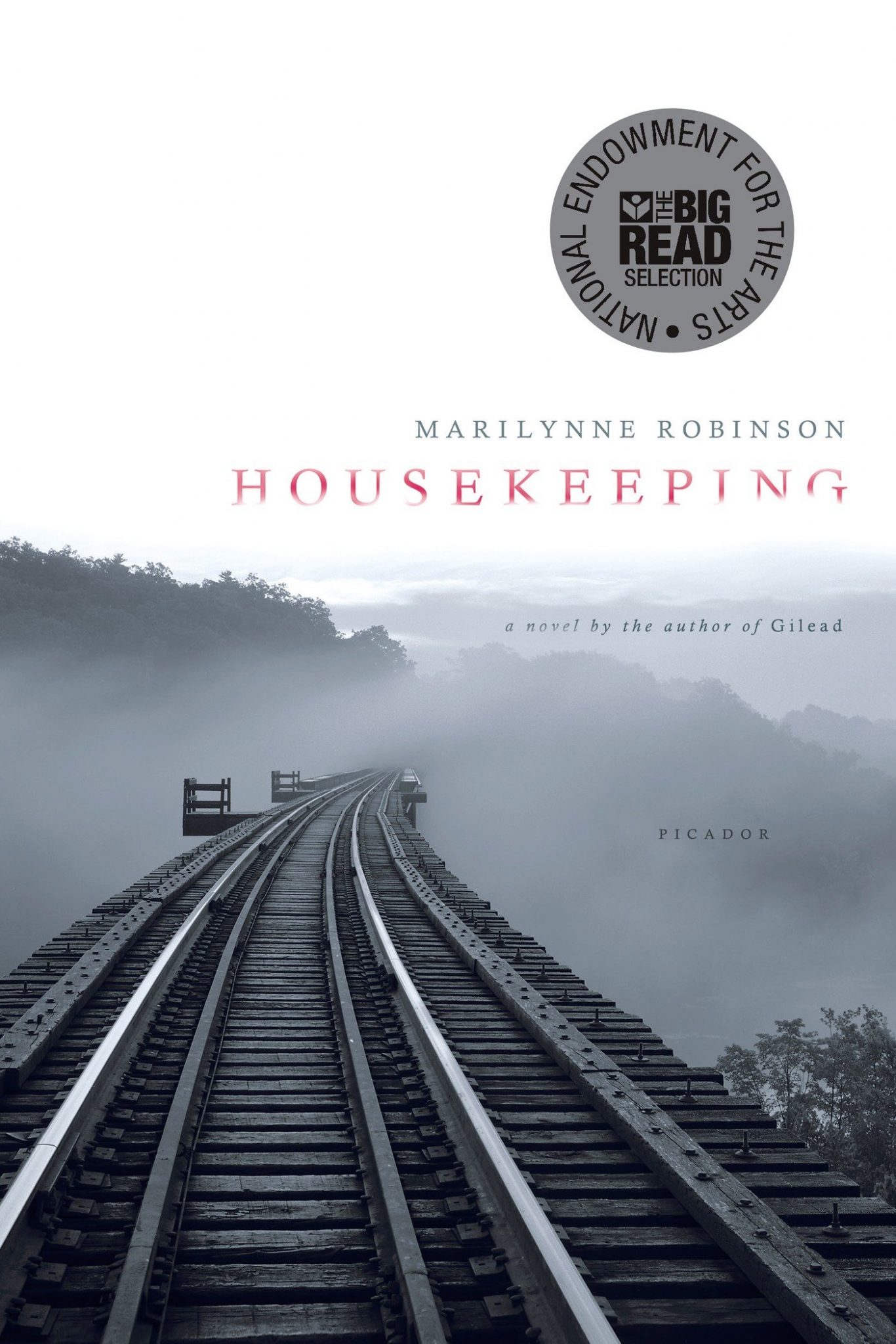 Christian authors need not, and probably should not, write for the approval of The New Yorker. It’s a good thing for the church, though, when a publication like that praises the work of a professing Christian by seeing—and receiving—the message of redemption, as did this review of Housekeeping:

Ruthie says of her grandmother that “the wind that billowed her sheets announced to her the resurrection of the ordinary,” and this kind of resurrection is as central to Robinson’s aesthetic sensibility as the Christian resurrection is to her spiritual one.

At the risk of setting expectations impossibly high, I will simply say Housekeeping is one of the best books I’ve ever read. (I’ve read a lot of books.) It’s the kind of book that must be read slowly, sentence by sentence, many of them demanding to be re-read, sometimes several times before going on, whether because of their depth of meaning or their astounding beauty or both. Consider, for example, this description of the main character’s grandfather:

He would pick up eggshells, a bird’s wing, a jawbone, the ashy fragment of a wasp’s nest. He would peer at each of them with the most absolute attention, and then put them in his pockets, where he kept his jackknife and loose change. He would peer at them as if he could read them, and pocket them as if he could own them. This is death in my hand, this is ruin in my breast pocket, where I keep my reading glasses.

Told through the eyes of Ruthie, a young girl abandoned yet loved, albeit imperfectly, Housekeeping on the surface concerns a family that is dysfunctional without knowing it’s dysfunctional, in a time and place where such wasn’t even a word. But even a family shattered by death, disaster, and mental disease can testify to the power of familial bonds:

Families will not be broken. Curse and expel them, send their children wandering, drown them in floods and fires, and old women will make songs of all these sorrows and sit on the porch and sing them on mild evenings.

As Christians we can extol the natural, God-ordained, inseparable ties between mother and child on bumper stickers, in pro-life pamphlets, and at Christian conferences. But none of these can match the power of Robinson’s descriptions, woven throughout the pages of this novel, of women haunted by the ghosts of mothers and children, given and gone. “Of my conception,” Ruthie tells the reader, “I know only what you know of yours. It occurred in darkness and I was unconsenting.” Later, on one of many days spent skipping school, Ruthie seeks out imaginary children—unlike her, homeless; like her, motherless. “If there had been snow,” Ruthie says about that day,

I would have made a statue, a woman to stand along the path, among the trees. The children would have come close, to look at her. Lot’s wife was salt and barren, because she was full of loss and mourning, and looked back. But here rare flowers would gleam in her hair, and on her breast, and in her hands, and there would be children all around her, to love and marvel at her for her beauty, and to laugh at her extravagant adornments, as if they had set the flowers in her hair and thrown down all the flowers at her feet, and they would forgive her, eagerly and lavishly, for turning away, though she never asked to be forgiven. Though her hands were ice and did not touch them, she would be more than mother to them, she so calm, so still, and they such wild and orphan things.

Housekeeping is a book steeped in biblical imagery and Christian theology. The literalist unable or unwilling to distinguish between the language of divine inspiration and the language of human metaphor may stumble over passages like this, one that makes the heart of the poetry lover soar:

Cain murdered Abel, and blood cried out from the earth; the house fell on Job’s children, and a voice was induced or provoked into speaking from a whirlwind; and Rachel mourned for her children; and King David for Absalom. The force behind the movement of time is a mourning that will not be comforted. That is why the first event is known to have been an expulsion, and the last is hoped to be a reconciliation and return. So memory pulls us forward, so prophecy is only brilliant memory—there will be a garden where all of us as one child will sleep in our mother Eve, hooped in her ribs and staved by her spine.

The narrator’s slow revelation and realization of the precariousness of her family situation unfolds in the same way as does the reader’s awareness that we’re all dysfunctional, the human family, living as we do between the now and the not yet. Ruthie’s ruminations on her particular discontent express this universal condition of persistent longing and stubborn hope:

I hated waiting. If I had one particular complaint, it was that my life seemed composed entirely of expectation. I expected—an arrival, an explanation, an apology. There had never been one, a fact I could have accepted, were it not true that, just when I had got used to the limits and dimensions of one moment, I was expelled into the next and made to wonder again if any shapes hid in its shadows.

And yet, even to have what we hoped for isn’t enough to fill the hole in the human heart:

To crave and to have are as like as a thing and its shadow. For when does a berry break upon the tongue as sweetly as when one longs to taste it, and when is the taste refracted into so many hues and savors of ripeness and earth, and when do our senses know any thing so utterly as when we lack it? And here again is a foreshadowing—the world will be made whole. For to wish for a hand on one’s hair is all but to feel it. So whatever we may lose, very craving gives it back to us again.

Ruthie’s final caregiver is, she slowly comes to understand, a transient one “unredeemed,” a hoarder for whom “accumulation” is “the essence of housekeeping.” And isn’t this true of us all? We’re all transients in this world, Housekeeping reminds us. “Every spirit passing through the world fingers the tangible and mars the mutable, and finally has come to look and not to buy.” The “sorrow,” Ruthie says, “is that every soul is put out of house.”

As desolate and lonely as the story appears, in uprooting the shallowly planted hopes we place in our earthly families and transitory homes (no matter how “functional” they might be), Housekeeping points us to the true hope we have in our final home, and the fact that we in Christ who yet wander in this world “will find a way home.” And there, Robinson writes, “the perished, whose lack we always feel, will step through the door finally and stroke our hair with dreaming, habitual fondness, not having meant to keep us waiting long.”