Most pastors I know were married in their early 20s and last experienced singleness in their mid-teens. They generally haven’t got a clue what it’s like to be a single Christian in your 30s, 40s, and beyond. If they want to understand a significant portion of their flock, they need some education.

They can start by reading Gina Dalfonzo’s One by One: Welcoming the Singles in Your Church. It’s her personal, raw account of singleness in the church today—and it should be compulsory reading for those who haven’t shared her experiences.

One by One will be uncomfortable reading for many married church leaders. Dalfonzo starts by sharing her own negative experiences of single life in the evangelical church, and the experiences of Christian singles she interviewed. These stories make you wince at how misunderstood and marginalized single brothers and sisters in Christ can feel.

Dalfonzo includes examples of teaching that have left people like her feeling bruised and bewildered. She movingly chronicles the damaging effects of describing marriage as “the central crucible for adult-making.” Are singles destined for immaturity if they never get married? Can they ever truly grow up without a wedding ring? 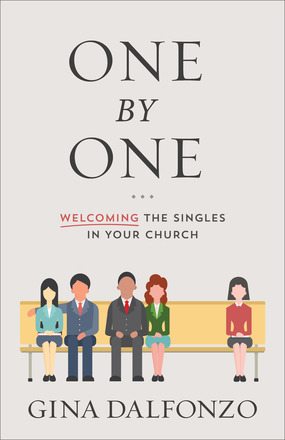 One by One: Welcoming the Singles in Your Church

One by One: Welcoming the Singles in Your Church

I’m sure that quote was intended to promote godly marriages, not damage single Christians. But Dalfonzo is justified in pointing out the unintended effect church leaders’ words can have, especially in a church culture in danger of forgetting that both marriage and singleness are good gifts from God. Dalfonzo shows that single church members are too often the collateral damage of well-intentioned attempts to encourage Christian marriages in a world where both are obviously under attack.

But her strongest criticism is saved for the writings of Christian leaders who’ve either raised young people’s expectations of marriage unrealistically (“Your prince/princess will come!”) or been overly legalistic in their teachings on pursuing marriage (“No kissing beforehand!”).

This book manages to escape becoming an ungodly rant against evangelicalism, thanks to Dalfonzo’s clear lack of personal bitterness and her sense of humor; she’ll make you laugh as well as wince. Her criticisms are constructive, and the aim of One by One is to build up and not destroy. The book is strongest when she closes with practical steps churches can take to be more singles-friendly and to avoid many of the mistakes she’s chronicled. Her closing appeal to look, listen, learn, and love is well made, though each task could’ve been developed with more concrete examples.

More generally, the book could’ve benefited from confronting us with more of the New Testament’s extensive and radical teaching on marriage, singleness, and family. Some of her points could’ve been better made or reinforced with direct quotations from Jesus. Letting him speak out of his singleness into the idolatry of marriage in the church today would’ve given the book’s central argument an even greater punch.

But don’t let these criticisms stop you from reading this book if you’re the sort of married pastor I described above. Leaders of effective organizations pay attention to common complaints. And the well-grounded complaints of our single sisters and brothers recorded in this book need to be heard if they’re to feel welcome in our churches today.

Ed Shaw is the pastor of Emmanuel City Centre in Bristol, England, and part of the editorial team at Living Out. He loves his family and friends, church and city, gin and tonic, and music and books. He is the author of Same-Sex Attraction and the Church: The Surprising Plausibility of the Celibate Life (IVP).