Faithfulness to the Word is the mark of successful ministry. Numbers are not. Numbers may deceive minds; faithfulness will defy metrics. Yet God delights in adding to his church, and he often gives numerical growth through faithful ministry. Consequently, growing churches may occasionally need to ask, “Where will we put all these people?”

It’s a good problem. And churches historically found a solution in amicable splits or building expansions. In the 20th century, though, many churches avoided expensive building programs by turning to multiple services. Then the tech-rich 21st century occasioned the advent of the multisite church—and not a little debate.

Jonathan Leeman is an important voice in that debate. In One Assembly: Rethinking the Multisite and Multiservice Church Models, Leeman argues the biblical model is one church meeting in one location, at one time, in one worship service—the time-tested one-assembly model. Though the book was published in 2020, Leeman voiced similar concerns as early as 2009. Our church took these concerns into account 10 years ago as we discussed the possibility of a second campus. Leeman’s warnings guided and restrained our decisions. 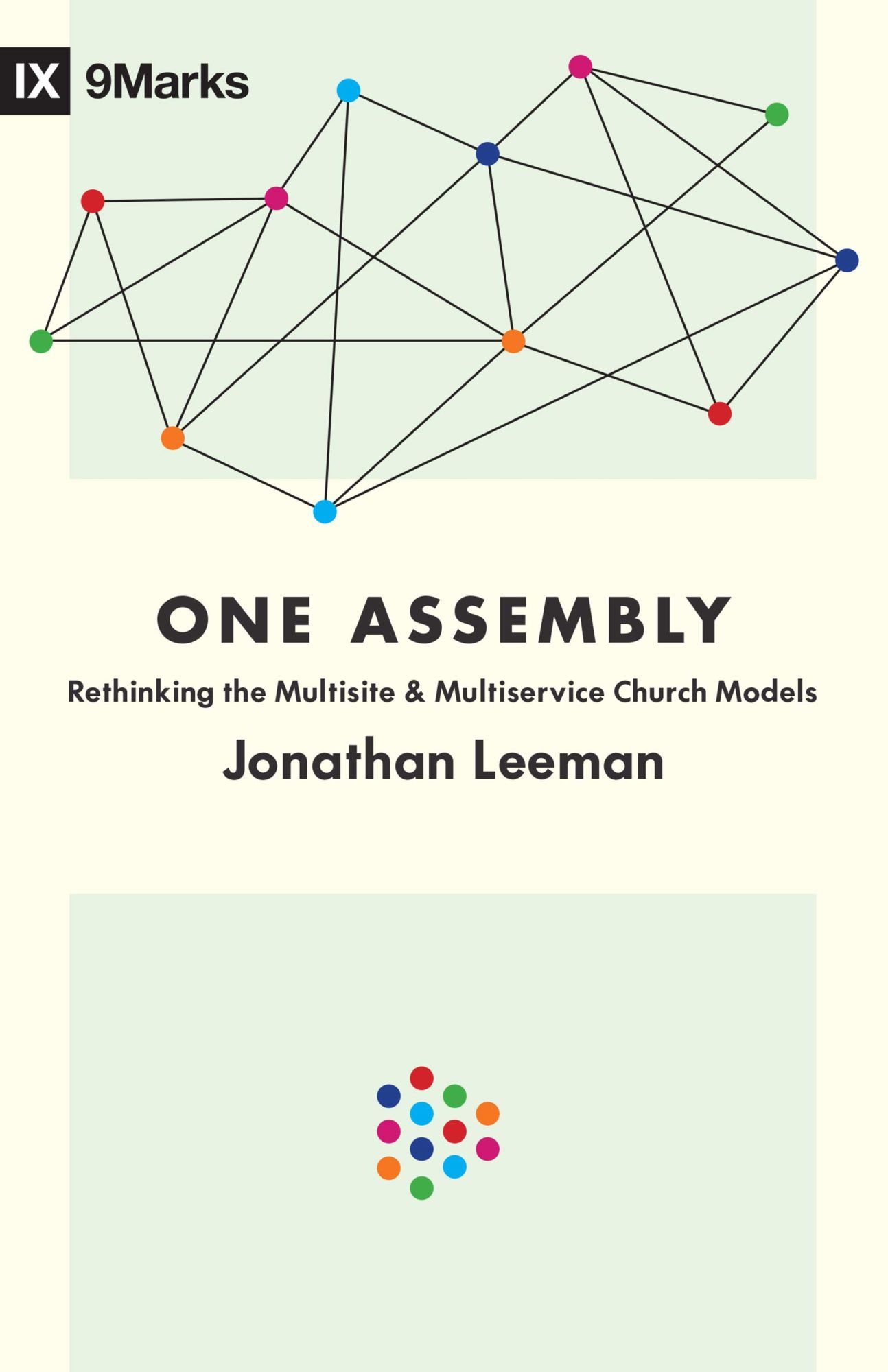 One Assembly: Rethinking the Multisite and Multiservice Church Models

One Assembly: Rethinking the Multisite and Multiservice Church Models

Maybe you have been there: you’re running late to church, and you know it will be hard to find an empty seat. This is an all-too-frequent experience in a growing church. For churches experiencing this dilemma, a common solution is to add another service or location. This seems like a cost-effective fix. Besides, no one wants to turn away non-Christians. But is it the best option?

Jonathan Leeman presents a series of biblical, theological, and pastoral arguments to help reorient our minds to a scriptural definition of church. He makes the case that maintaining a single assembly best follows the Bible, fulfills the Great Commission, and furthers our partnership with other churches.

Leeman’s thesis is clear: “There is no such thing as a multisite or multiservice church based on how the Bible defines a church. They don’t exist. Adding a second site or service, by the standards of Scripture, gives you two churches, not one. Two assemblies, separated by geography or numbers on a clock, give you two churches” (17).

The argument unfolds through three stages:

First, the multisite and multiservice (MSMS) model repudiates the Bible’s definition of church, and therefore those who resist this definition are “picking a fight with Jesus” (22). Nonetheless, believers who disagree on this second-order issue can and should affirm one another as partners in the gospel, Leeman insists (19, 37).

Second, the MSMS model redefines what a church is. Through a thorough tour of the Greek word ekklēsia, Leeman argues the only reasonable conclusion is that the MSMS model is not a biblical option.

Third, the MSMS model reshapes the church morally. A church’s structure has direct bearing on the way people relate to each other. The multisite model shifts more authority and responsibility away from the congregation to the leadership—an act of usurpation for the leaders and abdication for the members (22).

Suggestions for Digesting the Argument

Here are three suggestions I’d keep in mind as you weigh the propositions above.

You must decide if Leeman places too much weight on ekklēsia. Scripture uses a wealth of metaphors for the company of the redeemed: a family, a flock, a field, a fighting force, a body, a bride, a branch, a building, and so on. Might these inform our understanding of ekklēsia, which is arguably a metaphor likening the saints of God to a body politic in a Greek city-state? Leeman may be reading too much into one word.

2. Be alert to assumptions.

Leeman will challenge assumptions you’ve held for years. Perhaps you don’t even recognize them as assumptions; you just take them as settled facts. But Leeman interacts with various multisite advocates to demonstrate how their arguments are “rife” with assumptions (75).

Leeman makes some assumptions of his own, though. For example, he states “it is beyond dispute that the Jerusalem church gathered all together in the temple for preaching and baptism” (96). In support he cites Pentecost (Acts 2:1, 6). Perhaps it’s beyond dispute that the Jerusalem church gathered all together on that historic day, but to claim they all gathered at one time in the temple precincts—including Solomon’s Colonnade (Acts 5:12, NIV)—every single Sunday is itself an assumption. Luke never explicitly reports this. The only reference in Acts to the “first day of the week” describes a gathering at Troas (Acts 20:7). Maybe Leeman is right—and he spends several pages making his case—but like multisite advocates, some of his conclusions are based on assumptions.

3. Be open to self-examination.

Two temptations haunt ministry: to make much of ourselves instead of God and to view co-laborers as rivals. History demonstrates the one-assembly model in no way guarantees success in resisting these temptations. Nevertheless, Leeman makes a compelling case that the multisite model places a talented pastor in greater danger of failure. Importantly, the chapter on catholicity is worth the price of the book and inspires a nobler vision of being “as interested in promoting the kingdom of Christ as you are your own church’s programs” (107).

If you’re a multisite advocate, you may not like much of what you read, but you will find it difficult to refute.

I recommend this book for every church leader, especially those considering a multiservice or multisite structure. Leeman succeeds in his aim to incite some “rethinking.” If you’re a multisite advocate, you may not like much of what you read, but you’ll find it difficult to refute. It’s an exhausting but edifying exercise to engage the theological and lexical arguments Leeman marshals. You may even reconsider your church’s long-term plans for the sake of its long-term health. Multisite advocates who summarily dismiss Leeman’s arguments will miss an opportunity to refine and clarify their own.

Leeman didn’t finally dissuade us from forming that second campus, but he did persuade us to restrain our plans and limit our approach to a dual-campus model for reasons I offer in my full review of One Assembly. I believe we ought to heed his warnings about the pitfalls of multisite ministry, even if we aren’t ultimately convinced our view means we’re trying to pick a fight with Jesus.

Steve Bateman (ThM, Dallas Theological Seminary; DMin, Reformed Theological Seminary) has been senior pastor of First Bible Church in North Alabama for 30 years and is the author of Which ‘Real’ Jesus? Jonathan Edwards, Benjamin Franklin, and the Early American Roots of the Current Debate and Brothers, Stand Firm! Seven Things Every Man Should Know, Practice, and Invest in the Next Generation. Steve and his wife, Lori, have two children and three grandchildren. You can follow him on Twitter.