To become knowledgeable about anything, you need to take it seriously. You need to dedicate your time and energy to developing your skills, ability, and knowledge. When I was young, I dedicated my life to learning the art of juggling. Juggling is an enjoyable activity, but it can also create a moral dilemma: to be seen or to not be seen. To become a professional juggler, earning a living from the practice of this art, you need to be seen.

There’s a more insidious aspect of this desire to be seen, which is less about earning a living and more about being known, being applauded, being recognized—it’s the quest for fame and popularity. People need to know what I’m doing. What’s true of juggling could be true of any domain of study, be it art, science, or even theology. 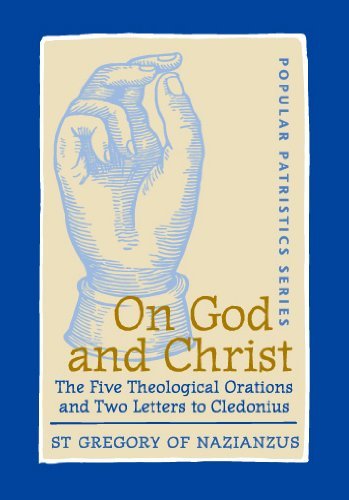 On God and Christ: The Five Theological Orations and Two Letters to Cledonius

On God and Christ: The Five Theological Orations and Two Letters to Cledonius

Gregory of Nazianzus, “The Theologian,” was recognized among the Cappadocian Fathers as a peculiarly vivid and quotable exponent of the doctrine of God in Trinity. A brilliant orator and accomplished poet, he placed before the church his interpretation of the sublime mystery of the God revealed as Father, Son, and Holy Spirit. These five sermons, probably delivered as a series at the small chapel of the Resurrection in Constantinople, where Gregory was the bishop in charge of loyal “Nicenes,” contain Gregory’s penetrating teaching. The English translation aims to capture for the present-day reader something of the atmosphere of intellectual excitement and spiritual exhilaration experienced by his first listeners. This work contains a new translation of Gregory’s letters to Cledonius, which contain more focused reflections on the person of Jesus Christ, laying the groundwork for later Christology.

Gregory Nazianzus (AD 329–390) has been rightly called one of the greatest orators of the early church, and five of his theological orations are available in a little volume published by St. Vladimir’s Seminary Press: On God and Christ: The Five Theological Orations and Two Letters to Cledonius. These orations have been influential in my theological development, and I’ve returned to them frequently over the past 10 years.

In the first oration, in which he refutes the Eunomians (who had rejected orthodox teachings about Christ), Gregory confronts this desire to be seen in the context of theology, and discusses the type of seriousness that should be evident in our lives as we seek to know God. The Eunomians, contentious rabble-rousers, were making their false teachings about Christ publicly known, seeking an audience, creating public disturbances, and promoting their views almost as if they were advertising a wrestling match.

Gregory confronts this way of doing theology, explaining that these men seem intent on making sure their false doctrines will be talked about in every city, household, and public event. His comment about the effect of their contentiousness challenges our contemporary culture, which is so entrenched in social media: “‘The great mystery’ of our faith is in danger of becoming a mere social accomplishment” (26).

Gregory appears to agree that the tendency to drag deep theological debate into the public square is harmful. He notes how rabble-rousers and “word-gamesters” are

like the promoters of wrestling-bouts in the theaters, and not even the sort of bouts that are conducted in accordance with the rules of the sport and lead to the victory of one of the antagonists, but the sort which are stage-managed to give the uncritical spectators visual sensations and compel their applause. (25–26)

By doing everything in their power to make their views publicly known, these troublemakers were transforming theology from contemplation into entertainment, and not even the good kind. Not even a professional demonstration of martial-arts prowess, just the cheap thrills of World Wrestling Entertainment.

These troublemakers were transforming theology from contemplation into entertainment.

Right People in the Right Place

Gregory doesn’t leave us without a solution to this appalling state of affairs. He provides reflections about how to come back to a renewed reverence for God. First, Gregory suggests, though we should always be “mindful of God” (27), we must recognize that deep theological discussions are not for everyone, nor for all occasions.

He elaborates these points, explaining that those who engage in deep theological discussion should be characterized by two things: “they have been tested and have found a sound footing in study,” and they “have undergone, or at the very least are undergoing, purification of body and soul” (27). They should have an ability and love of study, but more importantly they should be continually seeking purity in their lives.

Who should listen to theological discussions? To what audience should we appeal and speak? To those

for whom it is a serious undertaking, not just another subject like any other for entertaining small-talk, after the races, the theater, songs, food, and sex: for there are people who count chatter on theology and clever deployment of arguments as one of their amusements. (27)

The proper time for theological study, according to Gregory, is when you’re free from outside distraction. This requirement is all the more potent when contrasted with our current society:

Whenever we are free from the mire and noise without, and our commanding faculty is not confused by illusory, wandering images, leading us, as it were, to mix fine script with ugly scrawling, or sweet-smelling scent with slime. We need actually ‘to be still’ in order to know God. (27)

This is as important for professors as for students: when is the right time to study theology? When you have distanced yourself from the distractions of social media, television, phones, video games, movies, and all those other outside sights and sounds that are constantly attracting your attention and seeking to occupy your mind. We really do need to be still, to seek tranquility, to know God through his Word, and to rest in him.

Be Mindful of God

The question then arises: are we saying that only a special few, at certain times and in certain ways, are allowed to think about God? No. Gregory is talking about deep contemplative discussions about theology, about God. He continues by responding to this exact question, noting that we should always be “mindful of God” (27). There should never be a moment when our mind is not directed toward him, our highest and supreme good. “It is more important,” he observes, “that we should remember God than that we should breathe: indeed, if one may say so, we should do nothing else besides” (27–28).

Our contemporary, entertainment-driven world needs, more than ever, to learn from ancient wisdom return to the contemplative theology Gregory points us toward in his five theological orations. Theology is neither a wrestling match nor a circus. It should not be made into a theological cage match where flamboyant personalities, like luchadors, vie for attention and look to the crowd for approval after each successful takedown. There are standards for practicing theology, not least in terms of personal purity and reverential study in silent contemplation before God. What we need are Christian theologians who set aside the search for personal glory and seek to make God known.