Laziness is a familiar vice. Given the option, most of us prefer the quick and easy way to the slow and hard. Bodily health? Temperance and exercise are too burdensome; just give us a pill. Auto maintenance? Why pay for transmission flushes or tire rotations when you can just buy a cheap fuel additive? Test prep? Why build regular study habits when you can cram the night before? Until human nature changes, there will always be a market for snake-oil salesmen peddling a quick fix.

But what about sanctification?

Given human nature, it’s worth asking whether there’s a quick fix on the market—some version of “How to Become Holy in 3 Easy Steps” that’s much less strenuous than what Eugene Peterson (using an original phrase from Friedrich Nietzsche) called a “long obedience in the same direction.” According to Andy Naselli, there is. It’s called “higher life theology,” and he spends about 100 pages critiquing it in his new book, No Quick Fix: Where Higher Life Theology Came From, What It Is, and Why It’s Harmful.

What Is Higher Life Theology?

For Naselli—who teaches New Testament and theology at Bethlehem College and Seminary in Minneapolis—higher life theology (HLT) was the version of Christianity he grew up hearing. This early experience and eventual disenchantment with HLT motivated him to write this book. In fact, they motivated him write a PhD dissertation on the subject, which was later revised and published as Let God and Let God? A Survey and Analysis of Keswick Theology. In No Quick Fix, we now have a shorter, more accessible version of that labor. So if nothing else, No Quick Fix is both acutely personal and thoroughly refined.

In a nutshell, higher life theology is a view of the Christian life that divides Christians into two basic groups: those who are Spirit-filled and those who aren’t.

HLT involves a tendency to separate sanctification from justification, viewing it almost as a kind of “second conversion” (12). Thus it tends to see sanctification as more of a crisis event than a gradual process. 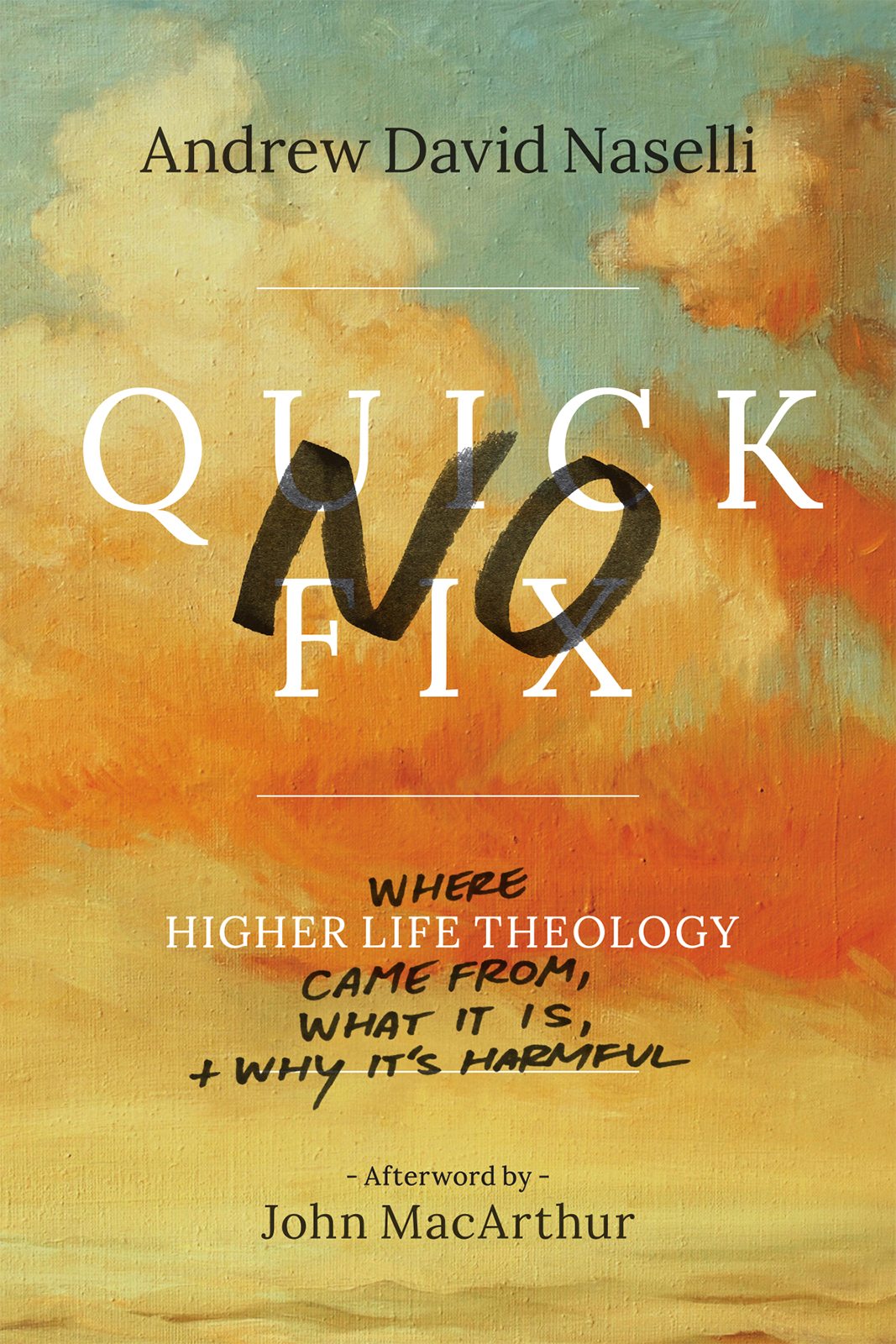 No Quick Fix: Where Higher Life Theology Came From, What It Is, and Why It’s Harmful

No Quick Fix: Where Higher Life Theology Came From, What It Is, and Why It’s Harmful

Every Christian struggles with sin and wants to be victorious in the fight.

Higher life theology—also known as Keswick theology—offers a quick fix for this struggle. It teaches that there are two categories of Christians: those who are merely saved and those who have really surrendered to Christ—or those who have Jesus as their Savior alone and those who have him as their Master as well. If Christians can simply “let go and let God” they can be free of struggling with sin and brought to that higher level of spiritual life. What could be wrong with that?

A lot, it turns out. In No Quick Fix, a shorter and more accessible version of his book Let Go and Let God?, Andy Naselli critiques higher life theology from a biblical perspective. He shows that it leads not to freedom, but to frustration, because it promises something it has no power to deliver. Along the way, he tells the story of where higher life theology came from, describes its characteristics, and compares it to what the Bible really says about how we overcome sin and become more like Christ.

Though not necessarily a one-time event like justification, this crisis event of surrender and its resultant state of victory separate the haves (spiritual Christians) from the have-nots (carnal Christians). You’re either there or you’re not. And if you’re not, then the urgent business of your life is to surrender now.

Where Did It Come From?

Even those not wild about history will likely find Naselli’s chapter on “the story of HLT” fascinating (7–28). If nothing else, you’ll be amazed at how widespread this teaching is, as well as how may great Christian men and women have held to it in some form.

In the first of many helpful charts, Naselli traces the spiritual ancestry of HLT, from its beginnings in John Wesley through the 19th-century Holiness Movement to the Higher Life Movement under Hannah Whitehall Smith, whose 1875 book The Christian’s Secret of a Happy Life can still be purchased at your local Christian bookstore (8).

All these streams eventually fed into the Keswick Movement (pronounced KEH-zick, named after a British town that became home to a famous Bible convention), which Naselli regards as HLT properly speaking. With the Keswick movement comes an all-star list of names revered by Christians across the board: Andrew Murray (“Keswick’s foremost devotional writer”), Hudson Taylor and Amy Carmichael (“Keswick’s foremost missionaries”), Francis Ridley Havergal (“Keswick’s hymnist”), and the list goes on (14–18).

This section also shows that while Naselli regards HLT as harmful, he doesn’t view it as heresy (46). Any theology embraced by Hudson Taylor and D. L. Moody can’t be all bad. HLT is to be commended for its warm devotion, its Christ-centeredness, and its orthodoxy on fundamental doctrines (45–47). But having gladly affirmed all that, Naselli then turns to constructive critique.

Here Naselli gives 10 reasons—one big one and nine small ones. The big reason—the one that gets its own chapter and composes one-quarter of the book—is this: HLT is harmful because it creates two categories of Christians (49–76).

This chapter contains Naselli’s greatest exegetical heavy-lifting, complete with phrase diagrams of key passages like Romans 6:1–23 and 1 Corinthians 2:6–3:4 (54, 56). Even twice-distilled from Naselli’s doctoral dissertation, it’s still not light reading. But when carefully read and reread, it richly repays.

In contrast to the dichotomizing of HLT, Naselli argues that not just some, but all Christians

In short, Naselli self-consciously argues for a Reformed view of sanctification (though one which Reformed Arminians like Matthew Pinson—a TGC contributor—would mostly agree with as well). If you fear Naselli’s theological orientation may skew his handling of the biblical data, I’d remind you that he writes as a former proponent of HLT, and not as one born and raised on B. B. Warfield. Beyond that, I’d simply encourage you to read his arguments.

Throughout the chapter, Naselli models intellectual virtue and careful scholarship. He displays a willingness to wrestle with the biblical data even where there’s tension, rather than ignoring texts that don’t fit comfortably with his argument. He also acknowledges where his interpretations are less certain, like whether the Spirit is the content with which we’re filled or the means by which we’re filled (64–65). With pastoral care, he tackles questions like “How do we obey the command to be filled with the Spirit?” (hint: it involves the Word) and “Doesn’t a command imply that you either obey it or disobey it?” (answer: not necessarily).

Having dealt at length with the most fundamental reason HLT is harmful, Naselli quickly fires off nine more reasons, of which I’ll analyze three.

1. Higher life theology is a form of quietism that emphasizes passivity rather than activity (81–83).

I confess I was surprised at how starkly some HLT proponents put this point. For example, Charles Trumbull asserted that “[any] victory you get by trying for it is a counterfeit victory. You must substitute another word; not try, but trust, and you cannot try and trust at the same time” (40–41).

To deny the role of active effort in sanctifying faith not only confuses sanctification with justification, it also runs headfirst into a legion of New Testament texts that describe sanctification in active terms (82 n. 21).

2. Higher life theology makes our free will the ultimate determiner in sanctification (84–86).

This is somewhat ironic given how strongly HLT seeks to downplay human effort in sanctification, to the point of arguing we mustn’t even try, but must simply allow Christ to do all.

But there’s the rub: Christ must do all, but we must allow him.

In the end, HLT doesn’t remove human effort from the equation; it simply concentrates it all in one place: letting go and letting God.

For all the talk about our doing nothing, we actually end up doing the decisive thing that “starts and stops” the entire process. And when we realize we’re still sinning and thus not living victoriously, we end up repeating the formula over and over and over again.

The problem here isn’t the continual cycle of sinning, repenting, and believing the gospel. This can be frustrating, no doubt—but it’s a lot less frustrating when your view of sanctification teaches you to expect it.

What’s really frustrating is when you think there’s a quick fix that will catapult you into a higher region where this cycle is no longer necessary, and you think you’ve entered this region already, only to find yourself sinning again. Come to find out you only thought you had consecrated yourself! Better try again . . . actually, don’t try . . . but you get the point.

Naselli’s account of J. I. Packer’s maddening experience with HLT is quite instructive (94–95).

Andy Naselli has given us a gem in this little book, one that can serve you and your church whether you hold to HLT or not. The exegesis is solid, the tone is irenic, the motive is pastoral, and the message is ultimately hope-giving precisely because it is as realistic about the gospel as it is about sin.

That’s the good news Naselli gives us. The gospel actually does transform us into holy people, even if gradually. There actually is a higher region where the sin-cycle no longer burdens us—it’s called heaven, and Jesus is going to bring it down with him. And there actually is a quick fix coming one day, and it’ll be really quick: “We shall all be changed. In a moment, in the twinkling of an eye” (1 Cor. 15:51–52).

Until then, in the words of Packer, let us not “let go and let God,” but rather “trust God and get going.” Or in the words of Hebrews 12:1–2, “Let us run with endurance the race that is set before us, looking unto Jesus.”