When it comes to gender roles in the church, I’ve lived my entire adult life with a duality framed in a simple question: “Are you an egalitarian or a complementarian?” It’s a serviceable way to frame the issue, and, for the record, I’ve landed squarely on the complementarian side of things. Yet this either-or approach to the so-called gender debate isn’t without its problems. Any form of dualistic thinking is liable to obscure the truth, which may well be found somewhere in the muddy (not to mention muddled) middle. Worse yet, dualistic thinking often invites certain emotional reactions from disputants that tend to expose their baser natures. Richard Rohr likes to talk about the seven C’s of dualistic thinking, an unhappy digression that ends in the violence of crucifixion: “It compares, it competes, it conflicts, it conspires, it condemns, it cancels out contrary evidence, and it then crucifies with impunity.”

Enter Michelle Lee-Barnewall’s recent book, Neither Complementarian Nor Egalitarians: A Kingdom Corrective to the Evangelical Gender Debate. Associate professor of biblical and theological studies at Biola University, Lee-Barnewall issues an invitation to step back from our business-as-usual way of framing the gender debate and to consider a more suitable alternative. Her intent is to persuade us that a different framework altogether is needed. We need different categories and ought to ask different questions. By framing the gender debate in terms of the dualism of complementarian and egalitarian, we’ve prioritized the categories of authority, leadership, equality, and rights. But, she says, these have only limited value in helping us uncover Scripture’s underlying logic concerning men and women in the church. Her thesis, signaled by the book’s subtitle, is that we must reframe the gender debate in light of the kingdom of God. This will furnish us with a different set of values that not only will offer fresh insight but also will move us closer to the Bible’s perspective on men and women.

Gender Roles in Ministry and Marriage

Lee-Barnewall’s argument unfolds in two steps, reflected in the two parts of the book. In Part One she explains why we need to reframe the gender debate by showing how evangelicals over the past century have defined gender in light of the dominant social trends of their day—whether in terms of the growing individualism of the post-war 1950s or the equal rights emphasis of the 1960s and beyond. There’s some fascinating stuff in these chapters; they’re well-researched and quite readable. I had not been exposed to much of this before and was appreciative of the considerable spadework involved in putting it together in so digestible a form.

In Part Two, Lee-Barnewall maps out a trajectory for what reframing the gender debate might look like in two important areas: ministry and marriage. Her discussion of ministry invites us to rethink whether equality, rights, and authority in the body of Christ are the best categories for thinking about gender. Her discussion of marriage unfolds in two steps: an intriguing discussion on Adam and Eve in Genesis 1–2, followed by a treatment of Ephesians 5. 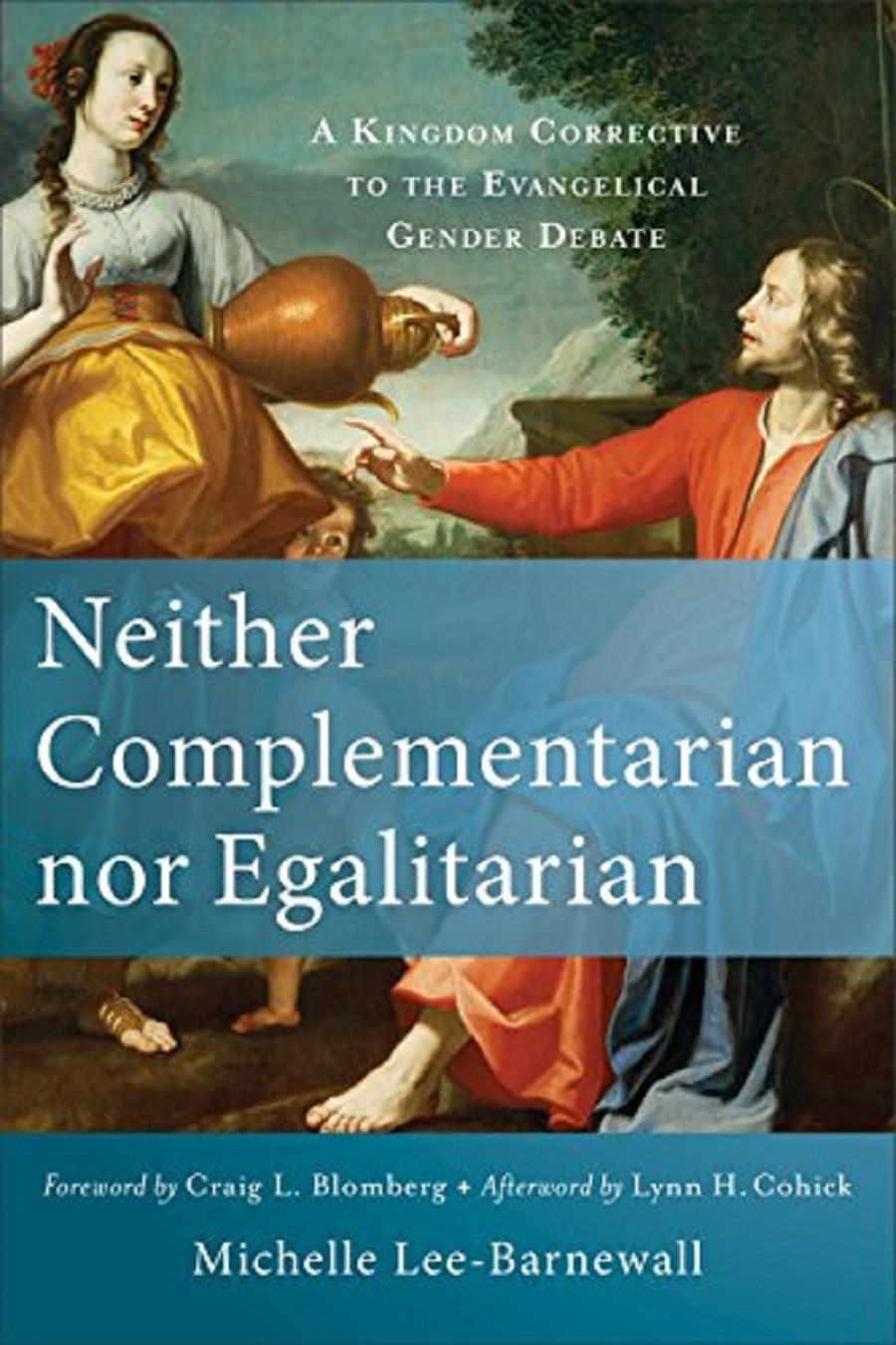 Neither Complementarian no Egalitarians: A Kingdom Corrective to the Evangelical Gender Debate

Neither Complementarian no Egalitarians: A Kingdom Corrective to the Evangelical Gender Debate

The linchpin for this section of the book—and arguably for the book as a whole—is found in chapter 4, where she briefly discusses the “kingdom themes” she considers “more transcendent and more fundamental to the topic” of gender (67) than the ones we typically employ. When we take seriously the kingdom of God, she argues, we’ll place less emphasis on concepts like authority, equality, and rights and place greater priority on themes of unity, corporate identity, and what she calls “reversal”—or the counterintuitive, upside-down, death-leads-to-life movement of so much of the New Testament. Here she takes particular aim at the tendency to read Scripture’s teaching on gender in highly individualistic terms. This, she rightly insists, misses the New Testament’s thorough emphasis on the corporate identity of God’s people.

While I find myself quibbling with several points (especially her reading of Genesis 2:24 and the description of becoming “one flesh” as a task Adam and Eve failed to accomplish), I’m impressed by the gracious and careful way she articulates her ideas and conclusions. I agree with Lynn Cohick’s comment in the afterword that Lee-Barnewall has given us “a new approach that brings more light than heat to the conversation” (179). For this I’m grateful, since it would’ve been far easier to simply reshuffle the deck and deal another salvo in the gender debates. Regardless of your views, there’s much here to appreciate.

Flaws in the Framework

Nevertheless, I should mention a few serious and substantive disagreements I have with Neither Complementarian Nor Egalitarian. The first deals with the nature of the book’s argument. As already mentioned, Lee-Barnewall’s aim is to persuade us of the need to reframe the gender debate in different categories. But there are two ways to make this kind of argument: a weak version and a strong version. The weak version would be to acknowledge that there are various categories we can use to frame the gender debate and that each set of categories has something useful to contribute to our understanding. At points, Lee-Barnewall appears to be making the weak version of the argument. For example, in her concluding chapter she says she has “attempted to highlight underutilized categories, such as unity and reversal, which have led to further categories such as love, suffering/sacrifice, and holiness” (169). But at other points, she clearly wants to make the strong version of the argument: that some ways of framing the issue have in fact misframed the issue, or at least have moved us away from the right biblical emphases. The strong version of the argument claims some categories are better than others. But this, of course, is a harder case to make since it requires that one justify one’s choice of categories, something that proves difficult since authors tend to want to show the advantages of their approach rather than justify why it’s preferred. This is true of Lee-Barnewall’s argument, and thus I would’ve desired a more thorough defense of her preferred “kingdom themes.” But this would require, in my judgment, more exegetical heavy lifting than is offered. Perhaps her overall argument would’ve been better served by devoting the first part of the book not to historical survey but to a more robust exegetical defense of her “kingdom themes.”

This leads to a second and related issue: the double-edged nature of her case that broader social trends have influenced the way evangelicals have framed the gender debate. She makes her case effectively, but I can’t help but wonder in what ways the broader social trends of our own time have influenced her preference for certain themes over others. If she were to do a revision of her book, say, 50 years from now, would she need to add a chapter to Part One on how gender was discussed in the early 21st century and offer similar critiques of her own formulations? Perhaps a half-century from now thoughtful evangelicals will find the categories of authority, for example, more central to the kingdom of God than we do in this anti-authoritarian and, yes, egalitarian age.

Lastly, I find the persuasiveness of the book’s overall thesis seriously undermined by the author’s failure to address what many would insist is the key text in the gender debate: 1 Timothy 2:11–15. Of course, as she acknowledges at the outset, no one can deal with every biblical text. Fair enough. But there’s a wide difference between dealing with a topic exhaustively and treating the essential texts on a given topic. Frankly, not dealing with 1 Timothy 2:11–15 in a book on the gender debate is like not dealing with Romans 13:1–6 in a book on politics. This oversight significantly blunts the force of her argument. In particular, it will be difficult to gain a hearing from complementarians without dealing head-on with what’s undoubtedly the crux interpretum for our school of thought.

Despite my misgivings at several points, let me reiterate that Neither Complementarian nor Egalitarians is a good book. Lingering with its argument will, I believe, have the profitable effect of making one more self-aware and self-critical of one’s assumptions, which is always a good thing. Doing so can’t help but engender greater humility and, in turn, grace toward those with differing perspectives on this sensitive issue.

Moreover, such awareness may encourage more candid and kind dialogue, which may even facilitate the coming together of God’s people in expressions of mutual love and understanding—what the New Testament envisions as Christian unity. Should this be the fruit of Michelle Lee-Barnewall’s fine book, I’d have to imagine the author herself would be quite pleased.

Todd Wilson (PhD, Cambridge University) is senior pastor of Calvary Memorial Church in Oak Park, Illinois, and chairman of The Center for Pastor-Theologians. He is author of Mere Sexuality: Rediscovering the Christian Vision of Sexuality, Real Christian: Bearing the Marks of Authentic Faith, Curse of the Law, Galatians, Pastors in Classics and The Pastor-Theologian. You can follow Todd on Twitter.