At first there were churches. Christians glanced at their clocks Sunday morning, realized the family was about to gather, and hurried down to the meeting place. “Hello, church. Great to see you.”

In the 1960s and ’70s multi-service churches showed up. They provide a convenient and cost-effective way to grow a congregation, even if everyone can’t meet at the same time. “Wait, you’re a member, too? Do you come to the 9:30 or the 11 a.m. service?”

A decade later, multi-site churches followed. They divide a congregation not chronologically but geographically. “One church, multiple locations” is the motto. People can meet closer to their homes, and they might have their own dedicated set of pastors. “I attend Trinity North, but I have a couple friends across town at Trinity South.”

Brad House and Gregg Allison, two ecclesial pioneers, want to lead the wagon train one mountain farther—to the land of the multichurch, in their book MultiChurch: Exploring the Future of Multisite. 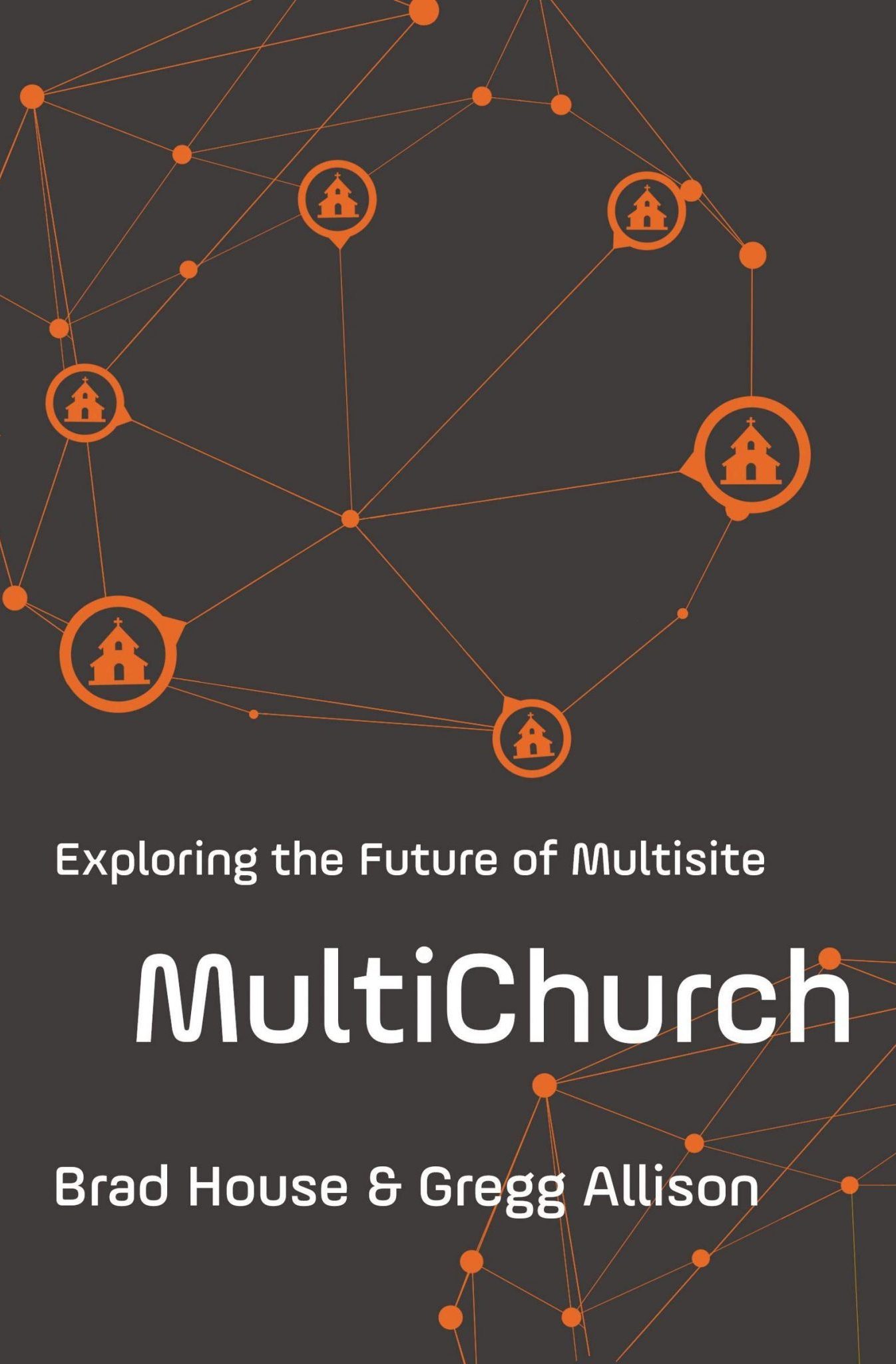 Is it time for your church to go multisite? It seems everybody is doing it these days, so how do you know if it is the right solution for your congregation? MultiChurch brings clarity to the multisite movement and assembles the lessons it has learned over the past fifteen years. It explores the opportunities presented by the various forms of multi-site church, identifies areas of concern, and concludes that multisite is not only a biblically sound ecclesiological model, but also a model that provides a compelling solution to contemporary reductionism in the church.

Like the multisite model, the separate locations of the multichurch call themselves one “church”—singular. They, too, are connected by a budget, brand, and board. They share a theology, vision, and philosophy of ministry, as well as the administrative mechanism for coordinating their work together. But unlike the multisite church, they name their sites or campuses “churches.” These different locations possess more authority to make location-specific decisions than what you’ll find on the campuses of a multisite church.

The authors illustrate the model: Emma shares the gospel with her cousin Courtney, who becomes a Christian. Emma wants to continue participating in Courtney’s discipleship, but they live on opposite sides of the metropolis. A multichurch allows Courtney to join a “church” closer to where she lives, a different congregation than Emma’s. But the two women can “share in the same church identity” because they belong to one “church.” (Yes, the word “church” is being used in two different ways—for a congregation and for a collection of congregations.)

The hope of the multichurch, House and Allison say, is to achieve a better balance between the one church’s centralized control and each individual congregation’s ability to own its unique ministry. The model aims for unity between congregations, not uniformity. It aims to enjoy one shared vision and set of core values, while giving freedom to each congregation to organize and pursue ministries suited to its context.

I suspect the term “multichurch” won’t catch on. The word itself is internally contradictory. If a multichurch is one church, then it’s not multi, but one. But if it’s multi, it’s not one. Right? Or am I just confused? I can’t tell.

Before going any further, you should know where I’m coming from. I’m one of the 14 American evangelicals left who believes that, since the Greek word for “church” literally translates as “assembly,” a regular assembly is a necessary ingredient for a church to be a church. You might call your 9:30 and 11 a.m. gatherings two “services,” but they’re actually two churches. So in fairness to the authors, having me review their book is a bit like having a Baptist review a book on infant baptism. You kinda know what you’re going to get.

That said, House and Allison don’t appear to have aimed their book at people like me, whom they wave off as offering “hypercriticisms” and imposing “personal preferences” on the biblical text. Rather, they appear to aim at folks who have adopted the multisite model, and their purpose is to offer a better way.

My verdict? They succeed! Or, at least they succeed in offering something better than the typical multisite model. If you’re convinced that the multisite or multiservice model are biblical (and on another day I’d want to convince you otherwise), then this book points you in a better direction. I’d encourage any committed multisiter to read it.

For starters, House and Allison are honest. They rightly observe that multisite churches don’t necessarily lead toward a cult of personality or a devaluing of the pulpit. Indeed, so-called pillar churches can succumb to the same seduction. But they acknowledge that the multisite model is, perhaps, more susceptible to these twin temptations. Video-venue models in particular risk elevating the messenger over the message. They also “reduce the opportunity and motivation to develop preachers.” House and Allison also acknowledge that many forms of multisite make it easier for church members to remain anonymous and avoid personal accountability.

In other words, House and Allison believe the Bible gives us the freedom to adopt a more centralized multisite model. I disagree. Still, they reason that the practical downsides of a multisite model should push pastors, as a matter of prudence, to adopt their alternative, which I agree is better than traditional multisite (I never thought I’d type those two words together!).

That said, let me highlight a couple of problems. The most significant is the Bible problem. Huge conversation, this. But let me quickly flag four biblical problems.

First, Jesus explicitly ties his presence and authority to two or three (or two or three thousand) “gathered” in his name (Matt. 18:20). He’s “there.” He’s “among.” Spatial words, those. He doesn’t say he’s “there” or “among” the presbytery, the synod, the board, or collection of congregations. (See my book Don’t Fire Your Church Members for a discussion of these verses.)

Second, there isn’t a single instance in the Bible of the word “church” being used both for the small gathering and the big gathering. Consider, for instance, how Luke says the Jerusalem church met in houses. Fine. So does mine. We call them small groups. And I’d be happy to say our “church”—singular—meets from house to house. My small group meets on Wednesday night at the Broggis’ house, in fact.

But what makes us a church is the fact that we all meet together on Sunday in the cafeteria at Spellman Elementary. So it is in Acts. Never are those house gatherings in Jerusalem characterized as “churches.” Instead, what made the church in Jerusalem a “church” is the fact that they all met together (2:41, 46; 5:12; 6:2). Same with Corinth (see 1 Cor. 5:5; 11:18, 33; 14:23, 26). Rome, interestingly, is just the opposite. Never once do we encounter the words “the church in Rome.” Instead, the text seems to insinuate there may have been several churches in Rome (see Rom. 16:5). Notice how careful the biblical authors are?

The simple way to put this second point is that MultiChurch, like most multisite literature I’ve seen, mistakes small groups, ordinary Christian fellowship, and hospitality for churches. Yes, church members meet in houses throughout the week. That’s what Christians do.

Third, Allison, in a number of books, including this one, has argued that the words “whole church” (e.g., Acts 5:11; 15:22) are evidence of multiple sites. By that rationale, Luke must be referring to several human bodies coming together as one body when he says, “the whole body is full of light” (Luke 11:36). And he must be talking about several cities coming together as one city when he says news about Jesus was proclaimed “throughout the whole city” (Luke 8:39). I fear Allison is reading his preferences into the Word.

Fourth, the entire biblical argument for multisite or multichurch depends on phrases like “presumably they all met” and “it’s not unreasonable to assume” and “surely they could not have” and so forth. I’ve read much of the literature, even the academic stuff about the probable sizes of houses in the ancient Near East. Assumption is added to assumption is added to assumption, and suddenly we’re all certain that “the church in Corinth” consisted of five campuses. Wait, what?

Here’s an exercise: Walk through the New Testament city by city, and look for concrete evidence of two or more church gatherings doing everything churches do (like preaching and baptizing) but still being called one “church.” What you’ll find is not fluidity in how the word “church” is used, as is so often stated by practitioners and scholars alike, but extreme care in using the word for a group of Christians who actually gather as one. The one exception is Acts 9:31, where the word is used as what grammarians call a collective noun with a singular verb, like “the report is spreading,” referring to multiple speech acts. [Luke, in fact, uses this device in a number of places beyond 9:31 where the preposition “throughout” (kata) is followed by the genitive case (see Luke 4:14; Acts 9:42, 10:37). Thanks to classical Greek scholar Anne Rabe for this insight, who explains all this in an appendix for a book I’m writing on multisite churches.] And it strikes me as strange to build an entire model on one use of a collective noun, particularly when the text is updating us for the first time on what happened to the church in Jerusalem after it had been scattered (Acts 8:1–3).

Finally, I admit, I still hold to the “hypercriticism” that the multisite church and the multichurch takes the assembly out of church. House and Allison argue that this is a methodological error of defining a concept entirely by a word. For instance, we wouldn’t say “salvation” in the Bible only means an act of saving or that “justification” only means the act of justifying. No, the concepts are much larger.

MultiChurch is a good book if you’re a committed multisiter. Indeed, it’s more biblical and more driven by theological instincts than any other piece of multisite literature I’ve encountered—by several light years. Even though House and Allison feel exasperated by people like me, their tone is gracious and kind, and their hearts are clearly pastoral.

They deny being presbyterian, because their congregation votes on a couple of things. I’d call their model a hybrid of presbyterian and congregational: multiple churches who can all vote on joint activities and who are united by a single board of elders (a presbytery).

There are further logical problems I would highlight if time permitted, such as the classification spectrum they use to define the landscape. Also, the book’s given methodology borders on incoherence. They say they want to be “biblical,” but then they establish “creativity” as the cardinal principle for building churches since God himself is creative. To this reader, that sounds like an excuse to go well beyond Scripture, which, again, I think they do. Either way, I love Gregg Allison, who was a professor of mine. He’s a wonderful teacher, godly man, and, I trust, a capable pastor. (I’ve never met Brad House.) We just have different views on this topic. I told you that’s what you were going to get. And I look forward to the day in glory when I’ll get to tell him, “I told you so.” Smile.

Jonathan Leeman is an elder at Cheverly Baptist Church in suburban Washington, D.C., editorial director for 9Marks, and the author of How the Nations Rage: Rethinking Faith and Politics for a Divided Age (Thomas Nelson). You can follow him on Twitter at @JonathanLeeman.

What Are the Most Common Objections Against Christianity?