“And knowing is half the battle.” That phrase concluded the public service announcement at the end of every episode of my favorite childhood cartoon, G. I. Joe. The hope was that viewers would act for the better once properly informed. David Horner, senior pastor of Providence Baptist Church in Raleigh, North Carolina, and council member of The Gospel Coalition, hopes his new book, When Missions Shapes the Mission: You And Your Church Can Reach The World, will will do the same for our churches and spur them into action for the cause of God’s glory in Jesus Christ to be made known across the globe.

The Local Church and World Missions

This book enters the fray at a time when church’s role in missions has been receiving much attention—Desiring God’s upcoming national conference centers on global missions and world evangelization, and Operation World’s seventh edition was recently published with considerable buzz. Through the use of technology such as social media, many ministries are successfully raising awareness and spreading a passion for the gospel to be proclaimed to the unreached peoples of the earth. There is a swelling excitement in the Western church for God’s name to be known and worshiped among the nations.

So is it superfluous for to write a book about missions shaping our ministry priorities? Unfortunately, current data show our churches are not effectively engaging in missions. So the answer is, no.

Horner insightfully shows that while evangelicals love the idea of missions, much of our involvement lacks depth and breadth, and sometimes even lacks involvement at all! Though effective missions was the goal of church committees and denominational teams and boards, many Christians and churches simply left fulfilling the biblical mandate in the hands of others, neglecting their own role and responsibility. Horner believes this disconnect is due to a fuzzy understanding of what missions actually is. “Missions”, Horner defines, “is God’s plan for reaching all nations with the good news of Jesus Christ by sending his people to tell them about and show them the gracious, redeeming love of a glorious God” (6). Horner not only points to the Great Commission for support, but he consistently equates missions with the Great Commission throughout the book (7, 49, 98, 173, 189). Just how much the Great Commission is equated to missions may be up for some debate, but certainly, if we neglect missions, then we are neglecting something central to the Great Commission.

The Purpose of the Church and the Challenge of the City

Horner demonstrates what the Bible teaches about God’s heart and plan for the nations. He lays a biblical foundation for pastors to cultivate and sustain sending, kingdom-focused ministries because, Horner writes, “The church has an eternal purpose that must be reflected in our priorities” (233). What is that eternal purpose? Horner focuses on the church as God’s own possession to bless the nations by reaching them with the gospel so that the nations know there is only one God and salvation can be found in him alone.

Still, some wonder whether every church should try to reach the world. What about our own neighbors and cities, which aren’t truly as Christian as the polls indicate? What about the numerous studies that show the world is becoming more urbanized, leading to new gospel opportunities in our own major metropolitan areas? Horner makes an effort to swing the pendulum back to a healthy center in the discussions centered around the city by aiming churches to be as focused on unreached nations as they are their unbelieving in their neighbors and cities. The Joshua Project says there are 6,933 unreached people groups that total about 2.8 billion people. Not all of these people groups will be coming to our cities or even the major cities in their part of the world. So Horner writes, “God wants us to be as ambitious for the nations as we are for the city in which our congregations are located” (223). The nations may be coming to our cities, but that doesn’t mean we stop going to the nations. 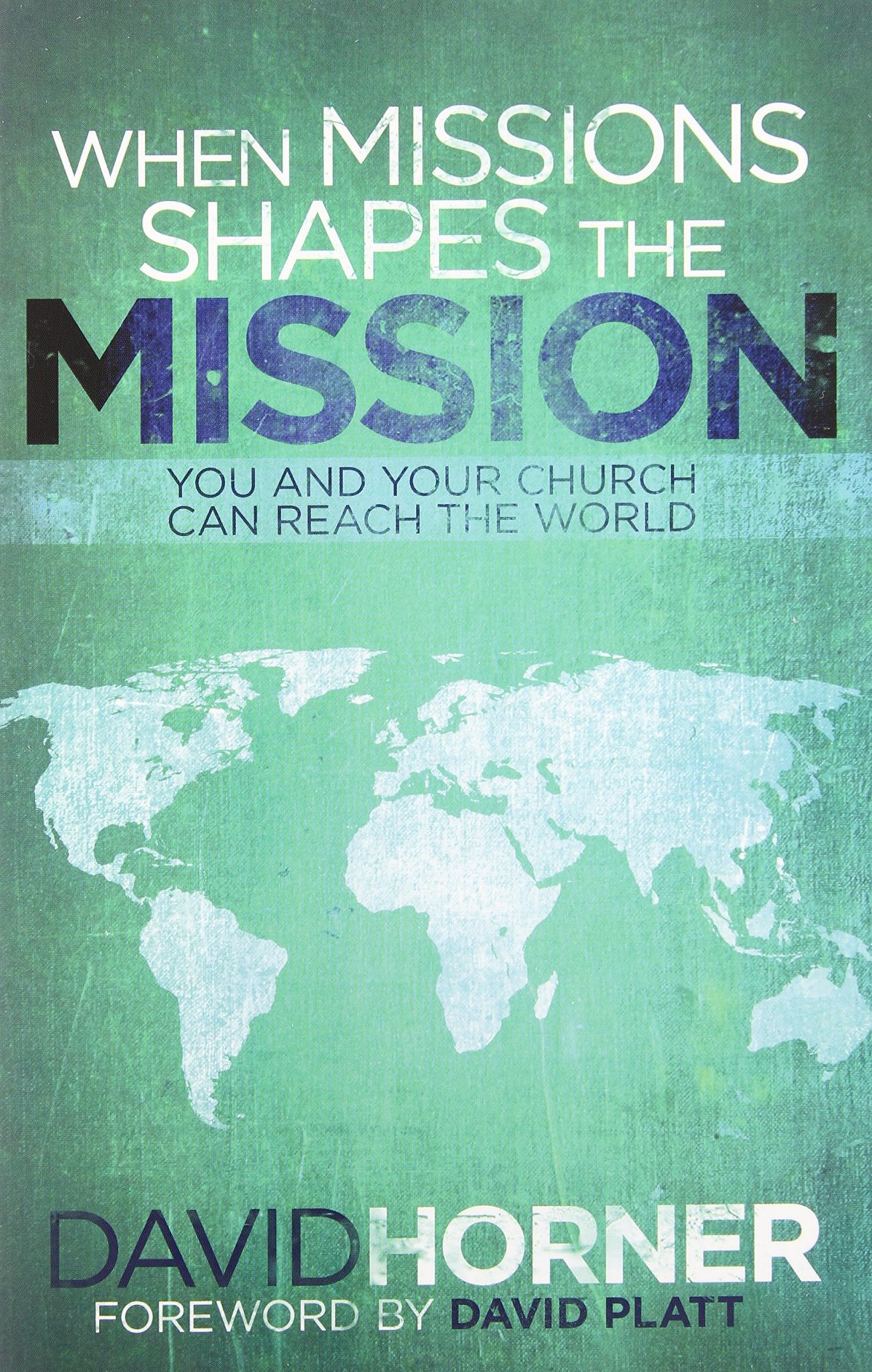 When Missions Shapes The Mission: You and Your Church Can Reach the World

When Missions Shapes The Mission: You and Your Church Can Reach the World

When Missions Shape the Mission unpacks a statistical study of traditionally evangelical churches that reveals their anemic level of commitment to the biblical mandate of making Christ known around the world. Veteran pastor David Horner makes the data easy to understand, challenging other pastors to radically assign their best leadership and resources to missions as he looks at where the church is today, how it got there, and where we must go from here.

Horner argues that missions should receive our best money, our best people, and our best time, meaning missions will not get any leftovers of the church’s resources. “We have a local address but a global understanding of who we are and why we exist” (230). That will surely raise a debate among many in our circles. But in all this, Horner never makes local ministry second fiddle. He is simply pointing out that many churches have emphasized the local to the neglect of the global, but “Christ never offered us that as an option! His commission is to make disciples by going to all peoples in all places with all diligence” (49). Horner gently offers a biblical counter-balance to the missional discussions.

When Missions Shapes the Mission is worth the time to read and contemplate, if nothing else, because Horner practices what he preaches. As a young pastor, I found I was being shaped and stretched. It’s full of Bible and rooted in a deep desire to spur the church from navel gazing to gospel proclamation.