The whole “missions” world can seem exotic to the average layperson. Missionaries are celebrated as a rare and risk-taking breed. If someone in the church gets the missionary itch, we shuttle them off into a niche committee, further enhancing their mystique. As a result, few church members experience missions as central to the life of their church.

In his new book, Missions: How the Local Church Goes Global, Andy Johnson wants to normalize missions and missionaries. Missions, he contends, is the job of every local church. As an elder at Capitol Hill Baptist Church in Washington, D.C., and a trustee of a large missionary organization, he can see things from both perspectives.

Johnson invites us to imagine a local church where missions is the concern of the entire congregation, not simply the work of a select few. It’s a core ministry, not merely a passing short-term project. Giving to missions isn’t random or tertiary, but a fundamental component of the church’s budget. Missionaries are supported by the congregation in the context of deep, long-lasting relationships. 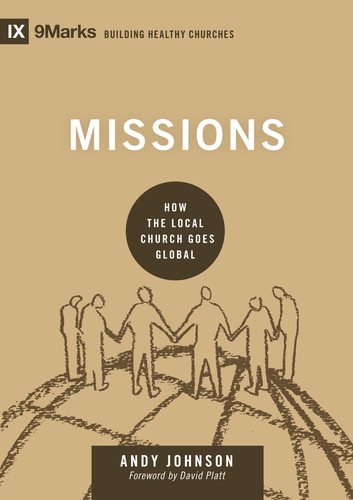 To make this happen, Johnson proposes this simple yet revolutionary idea: an elder-led mission strategy.

Putting elders in charge will communicate the centrality of missions, he believes. Pastors are uniquely able to expose missions to the whole congregation, but there are many other tasks for elders to do. They should set budget priorities and guide the strategic focus for giving; they should identify, mentor, and vet prospective missionaries; and they should prioritize congregational prayer for missionaries and regularly visit and care for global partners.

Chapter 3 is the most useful section of the book, providing a biblical basis for scrupulous and generous giving to missionaries. This is a rarely discussed topic, and Johnson gives practical examples and tips for churches who want to support missionaries well. While it may not have been his intent, the chapter also defends more traditional missionary methods and is a healthy counterbalance to the growing trend of exclusively leveraging global business as mission.

The next chapter calls churches to emphasize depth over breadth in missionary partnerships. As someone who has been on the receiving end of both types, I can heartily endorse Johnson’s recommendations. But he also warns churches to avoid the opposite error of putting all our eggs in one basket. He urges prudence in efforts to reach the unreached—another trend in missions—recognizing the simultaneous need to ground, support, and train existing churches in so-called reached areas.

Johnson also addresses the ever-growing industry of short-term trips. Again, he brings seasoned and sound advice, advocating for trips focused on supporting missionaries and encouraging local believers. While his suggestions may offend some short-term missions advocates, he’s right. So much time and effort and resources are put into trips that are unhelpful and even damaging to the gospel.

Lastly, Johnson directs our attention to three growing areas of opportunity for the local church in missions. He shares ideas on ways to reach internationals at home, how to maximize business opportunities abroad, and the unique prospect for international churches in global cities—revealing opportunities and pitfalls for each scenario.

While this book is full of useful counsel, there are some missing pieces, especially about the local church’s role in missions.

First, outside of a small paragraph, there wasn’t much discussion of elders vetting mission agencies (85). If churches are to take ownership for whom they send overseas, they must identify dependable parachurch organizations.

Second, a significant issue for many missionaries is the question of authority. Are they accountable to their organization or to their sending church? What about a scenario where they become members of an existing indigenous church? These are complex issues for such a small book, but I think it would’ve been possible to address them more fully.

Third, for all my appreciation of his handling of missionary support, I would love to see a discussion of the biblical model of receiving support “along the way.” Johnson convincingly advocates for adequate support from 3 John and elsewhere, but the apostles often expected to receive support from those to whom they ministered, not simply from sending churches. This would obviously mean a wholesale change in the way we envision missionary support, but I believe it’s worthy of consideration.

Overall, this book is refreshingly simple, biblical, and wise. Though Johnson isn’t writing explicitly on current trends in missions, he helpfully navigates some modern-day issues. But this is ultimately a book to help churches become fully engaged in fulfilling the gospel mandate worldwide. May it succeed spectacularly.