Malik paused. “Did it ever occur to you that people from my neighborhood are scared about rollin’ up on your neighborhood?”

“Robbery and thugs ain’t the only things to fear. There are other things people like me gotta worry about. Stuff you wouldn’t understand.” 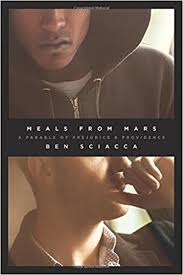 Meals from Mars: A Parable of Prejudice and Providence

Meals from Mars: A Parable of Prejudice and Providence

Most people enter discussions of racial injustice like they’re entering a gun fight: heavily armed. Their weapons are statistics, experience, and a bevy of opinions and solutions. A new novel titled Meals from Mars: A Parable of Prejudice and Providence helps to de-escalate the conflict. Written by educator Ben Sciacca, this book will benefit not only his high school students in Fairfield, Alabama, but also suburbanites and those in between.

Meals from Mars opens with guns drawn on the two protagonists, Jim and Malik. We see blood, police lights, and a young black man shot by police. This is an unfortunately familiar narrative today, but Sciacca gives us the story behind the headlines—the story about the incredibly complex lives involved in this scene: Jim, Malik, and the law enforcement officers sworn to protect and serve.

Jim, an affluent, churchgoing white man from the “right” side of the tracks, is a Good Samaritan. He delivers food to a poor family on the “wrong” side of the tracks. Malik is an 18-year-old black man who lives with his grandmother in her apartment. She sends him out to buy ingredients for Thanksgiving dinner. Trouble quickly ensues. The lead on the case, MarQuan Cole, is a neighborhood kid turned professional detective. He finds himself at the intersection of violence perpetrated by blacks and the disrespectful white world he’s obliged to protect and serve.

These men’s worlds are on a collision course that ends with a young black man shot, a suburban white man forever changed, and a black cop in conflict.

For Sciacca, Meals from Mars is more than a story; it’s his life. He serves as executive director of Restoration Academy, a Christ-centered private school in one of Birmingham’s poorest neighborhoods. Each day Sciacca teaches and mentors young black men, empathizing with their experiences, feeling their pain, and refusing to give simple answers to complex problems.

Sciacca knows that when churches engage in ministry to poor youth in predominately minority neighborhoods, they assume the poor youth are the only at-risk group involved. In fact, two groups are at-risk: those ministered to and the ministers themselves. For poor youth, risks include lack of education, cyclical poverty, and basic needs going unmet. For those ministering to the poor, the risk is believing that affluence or social standing grants them a heroic position. They’re at risk of self-righteousness, false holiness, and a paternalistic mindset.

Sciacca labors to protect both groups from these risks at his school. Urban students are greatly helped by community churches, and affluent volunteers are rescued from the sin of self-righteousness. The result? A collective flourishing of both urban and suburban individuals that brings glory to God.

Urban ministry, in part, requires the resources, networks, and talents of the affluent alongside the creativity, ingenuity, and brilliance of poor communities. Meals from Mars doesn’t offer a one-size-fits-all answer to racial strife and injustice in our country. It does, however, humanize both those in the prison of poverty and also those in the prison of paternalism.

Effective urban ministry can’t be done by “Turkey Men”—those who deliver a turkey at Thanksgiving and that’s it. Effective ministry requires intentionality—the same intentionality exhibited by God at creation and Christ in his incarnation, the intentionality that gets our hands dirty by bringing holistic remedies to struggling communities through being a part of them.

A major strength of Meals from Mars is the running dialogue between Malik and Jim. Through several chapters they discuss socioeconomic inequality, educational inequality, joblessness, police brutality, incarceration, and the Confederate flag, among other things. Their limited experience of each others’ worlds often leads to communication breakdown and rudeness. But even though both come to the table eager to air their own views, they leave learning more than they imagined. The most surprising revelation might be that while they come from different sides of the tracks, they are quite similar.

Sciacca’s characters discuss many complex racial issues, but Sciacca offers no solutions. He does, however, create an environment for the reader to feel. Perhaps this is the book’s greatest strength—the empathy it encourages us to recover. You won’t find simple answers to racism in this novel. You will, however, be confronted with the difficulties and nuances of social dynamics.

Should you pick up this book, be warned that you may walk away slower to speak, slower to anger, and quicker to listen.

3 How to Expose the Idols in Your Life

5 How to Read Your Bible without Missing the Point