In his 1967 book The Sacred Canopy, Peter Berger more or less invented sociology of religion as we know it. It revolutionized the field not only because it was profound, but because it was short and did not assume much prior knowledge. It was not beach reading, but laypeople willing to make the effort could grasp the extraordinary vision Berger laid out for how we can understand the central role of religion in the structure of society.

Berger, professor emeritus of sociology at Boston University, has done it again. The Many Altars of Modernity: Toward a Paradigm for Religion in a Pluralist Age is even shorter (93 pages) and more accessible to the layperson than The Sacred Canopy. Yet it has the potential to re-revolutionize the sociology of religion.

Like The Sacred Canopy, this book speaks to the huge paradox of modern times. We have overcome so many bigotries and unlocked so many doors to human flourishing, yet we find it harder to know the meaning of it all. Even as we grow to new heights and accomplishments, the basic structures of society—from family to economics to democracy to international affairs—seem to be endangered.

The Many Altars of Modernity shows how, to a large degree, all these good and bad things spring from a common source. We have not yet solved the central puzzle of modernity. How can people of diverse beliefs share social space without undermining their own beliefs?

The book’s first extraordinary service is to make complex phenomena clear. The coexistence of many religious and moral systems in a shared social space—pluralism—irrevocably changes the nature of religion and morality. Things unconsciously taken for granted before pluralism now become things we must consciously choose whether to believe. The character of God, the nature of sin, the permanence of marriage, the occurrence of miracles—one by one, slowly but surely, everything that was once simply “given” becomes a subject of momentous deliberation. Fate becomes choice.

This change has beneficial effects, but also costs. At the individual level, people are more aware of their beliefs and must be intentional about sorting out truth from falsehood. They find it easier to live in peace with neighbors they disagree with. On the other hand, most people have great difficulty shouldering the burden of choice. I don’t choose whether to believe 2 + 2 = 4, but in a pluralistic environment I do need to choose whether to believe Jesus is God. For most people, this seems to create a feeling that the latter belief must somehow be less certain than the former. Choice makes it harder to overcome doubt. 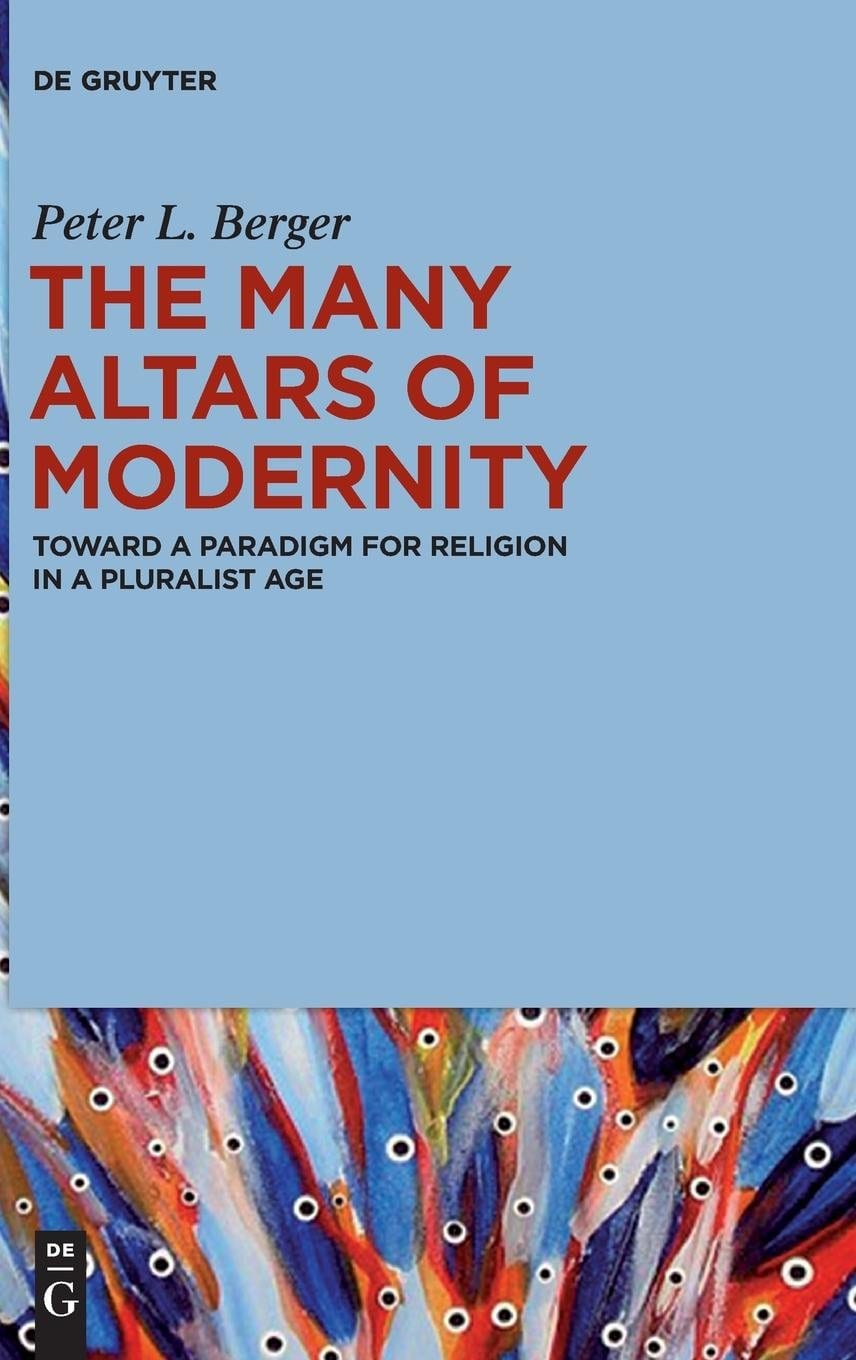 The Many Altars of Modernity: Toward a Paradigm for Religion in a Pluralist Age

The Many Altars of Modernity: Toward a Paradigm for Religion in a Pluralist Age

At the social level, religious organizations gain greater freedom to act, and learn to live in peace with other religions. It becomes possible to enjoy fully the great blessings—spiritual as well as material—of religious freedom, the rule of law, an entrepreneurial economy, and modern technology. On the other hand, all institutions become socially weaker and less able to play a role in people’s formation. And the coexistence of multiple moralities produces an unending stream of political crises.

The existence of a large social space shared by many religions makes it possible for people to construct ways of thinking and living that commit to no religion. Berger points to examples like surgeons and airplane pilots, who must strictly conform to procedures that do not change for Christians, Muslims, and atheists. Religious people seem to have little difficulty participating in these shared ways of life without undermining their own belief. So the decline of religious belief anticipated by so many sociologists (including Berger in The Sacred Canopy) has not occurred. However, because the secular methods are shared by everyone while religion is not, the secular methods inevitably begin to claim supreme authority in the public square. This creates conflict, especially as some people begin to embrace what Berger calls “the secular discourse” as a substitute for religion itself. Once this secularism arises, it inevitably conflicts with religion.

Modern life thus raises two closely related problems, both of which involve finding a “formula of peace” between conflicting modes of belief and practice. How can people of different religious beliefs share a society without being consumed—either by a conflict between religions, or by the persistent sense of doubt that pluralism creates? And how can religion itself share a society with “the secular discourse”?

There are many possible ways of mediating these tensions, Berger argues. Thus, the sociology of religion must abandon the long-held expectation (generated in part by The Sacred Canopy) that modernity will inevitably move in only one direction. Berger reviews five major strategies that various societies have used for dealing with these problems, and argues that religious freedom is the one with by far the best prospects of success.

No Avoiding the Issue

The book’s second extraordinary service is to debunk the many tricks we have invented for trying to avoid confronting the challenge of pluralism. Fundamentalists and relativists, who seem so unlike one another, are twins under the skin; both seek to escape the dilemma of doubt instead of confronting it. As Berger shows, both drive their followers toward a tyrannical desire to seize more and more control over their social environment, in order to hold the trauma of doubt at bay.

But Berger’s deeper confrontation is with the huge intellectual class of traditionalists and conservatives who hold, in various ways, that the crises of modernity stem from bad ideas. This implies the crises can be avoided or rectified if we replace the bad ideas with better ideas. Berger names Charles Taylor, but in fact this view is almost totally dominant on the Christian intellectual scene in the English-speaking world. As Berger shows, this view is wrong, and dangerously so.

Against Taylor and the dominant traditionalism of the Christian intellectual world, Berger argues that the real origins of modernity—and hence of the crises of modernity—are in the religions themselves, and the sociology of their encounter with one another. Once the world’s great civilizations made the transition from primordial mythology to mature religions, capable both of making truth claims and of accommodating economic and technological advances, it was inevitable that we would someday face the challenge of pluralism. We can denounce “modern ideas” until we are blue in the face, but once adherents of the world’s religions start interacting with each other on a daily basis, we cannot avoid the trauma of choice and doubt. The great historic encounter cannot be undone.

Berger also opposes those who think we can address the dilemmas of modernity entirely outside of politics. As he shows, modern people find it easier to get along with those of other beliefs at the personal level; but at the political level conflict becomes worse. Yes, we can and must mitigate the political conflict by building stronger bonds of peace at the personal level. But there is no serious way to address the problem without a renewal of religious freedom as the foundation of the political and constitutional order. To avoid politics altogether and work exclusively in the personal realm is like looking for your car keys under the lamppost instead of where you dropped them, because the light is better under the lamppost.

As If God Did Not Exist?

Berger doesn’t get everything right, of course, and one of his errors is critical. He thinks that when we participate in those shared, wholly natural social spaces defined by practices that commit to no religion, we are behaving “as if God did not exist.” He would have done better to draw a distinction between “natural” and “supernatural” activities rather than “secular” and “sacred.”

Berger gives the game away when he says that even a 16th-century Spanish nun was behaving “as if God did not exist” when she reformed the convent’s accounting to bring it into line with sound principles of financial management. If she read Berger’s book, she could easily reply that she was behaving as if God did exist—and was going to hold her responsible to manage the convent’s finances well! Berger argues that the same accounting principles work just as well for atheists. But the financially savvy nun could reply that it is really the atheists who are double-minded; they say there is no God, but they manage their finances as if they lived in a stable, logical universe, which the human mind is capable of understanding and within which the human will is capable of acting meaningfully.

The error has practical consequences. In discussing religious freedom as a way of coping with the dilemmas of modernity, Berger notes the American and French models but neglects the critical difference between them. Where Americans want a shared space that neither requires nor resists faith, the French believe a shared space must intentionally push faith away. Berger should not have lumped the American and French models together; in the years ahead, the most important conflict will take place between these two competing ways of understanding religious freedom.

I am disappointed that the publisher of The Many Altars of Modernity has set its price at a high level that would be more suitable to an obscure, scholastic book. This is a profoundly important work, the fruit of a lifetime of scholarship from easily the most important sociologist of religion in the past half-century, if not the past century. It deserves a wide and highly engaged readership.