Henri Nouwen is a complicated figure. He was a Roman Catholic priest whose influence extended far beyond Roman Catholicism. His ecumenical appeal made more angular Catholics nervous, and his Protestant readers gave “qualified” appreciation. While Nouwen wasn’t a liberal, his life and work is a product of a Vatican II age. It came out after his death that he was gay, though he remained celibate and trusted the church’s teaching. Despite his chaste life, his presence in the gay community and his work with AIDS advocacy in the 1980s often made more religious conservatives nervous.

Nouwen was, admittedly, not a theologian but a pastor, spiritual director, and an activist. For more suspicious readers, he always seemed theologically elusive. For the weak and wounded, he always seemed inviting. A new collection of his letters, Love, Henri: Letters on the Spiritual Life, gives evidence of the latter. Henri, above all, was a pastor with a gift for soul care.

If you’re familiar with Nouwen’s works, you know they tend to be autobiographical. In The Road to Daybreak: A Spiritual Journey and Beyond the Mirror: Reflections on Life and Death, Nouwen wrestles with his struggles and experiences. Other books like The Wounded Healer, The Return of the Prodigal Son, and Reaching Out aren’t necessarily autobiographical, but they reflect his spiritual development. Love, Henri: Letters on the Spiritual Life fills in the gaps of what we know about his life.

The letters begin in 1973 when Nouwen was at Yale, teaching spiritual and pastoral theology. He was 42 and had been a priest for 16 years. The problem of calling was a struggle he would never quite shake for the rest of his life. From his time at Yale, then to Harvard, then to France where he ministered to the mentally handicapped, then to Toronto where he deepened his involvement with the handicapped community, Nouwen always wrestled with calling.

In reading Nouwen’s previous works, I’ve often felt he was prone to navel-gazing. The constant question of “Am I doing what God wants?” seemed to cripple him at times. While there was perhaps a touch of self-indulgence in Nouwen, much of it came from a longing to follow Christ in hard places and listen to those he saw as spiritual guides and authorities.

In addition to his academic and priestly work, Nouwen constantly grappled with how much traveling, outside speaking, and writing he ought to do. As he aged, his fame and demand grew. He seemed to resist saying no to requests and would regularly pay for it with physical exhaustion, which often led to sickness or spiritual depression. Deep in his letters you find regular confession of his longing to be known through his writings and speaking engagements. The recognition of his desire to be liked by others and his regular confession of that to other Christians is a good example of someone with sanctified self-awareness. 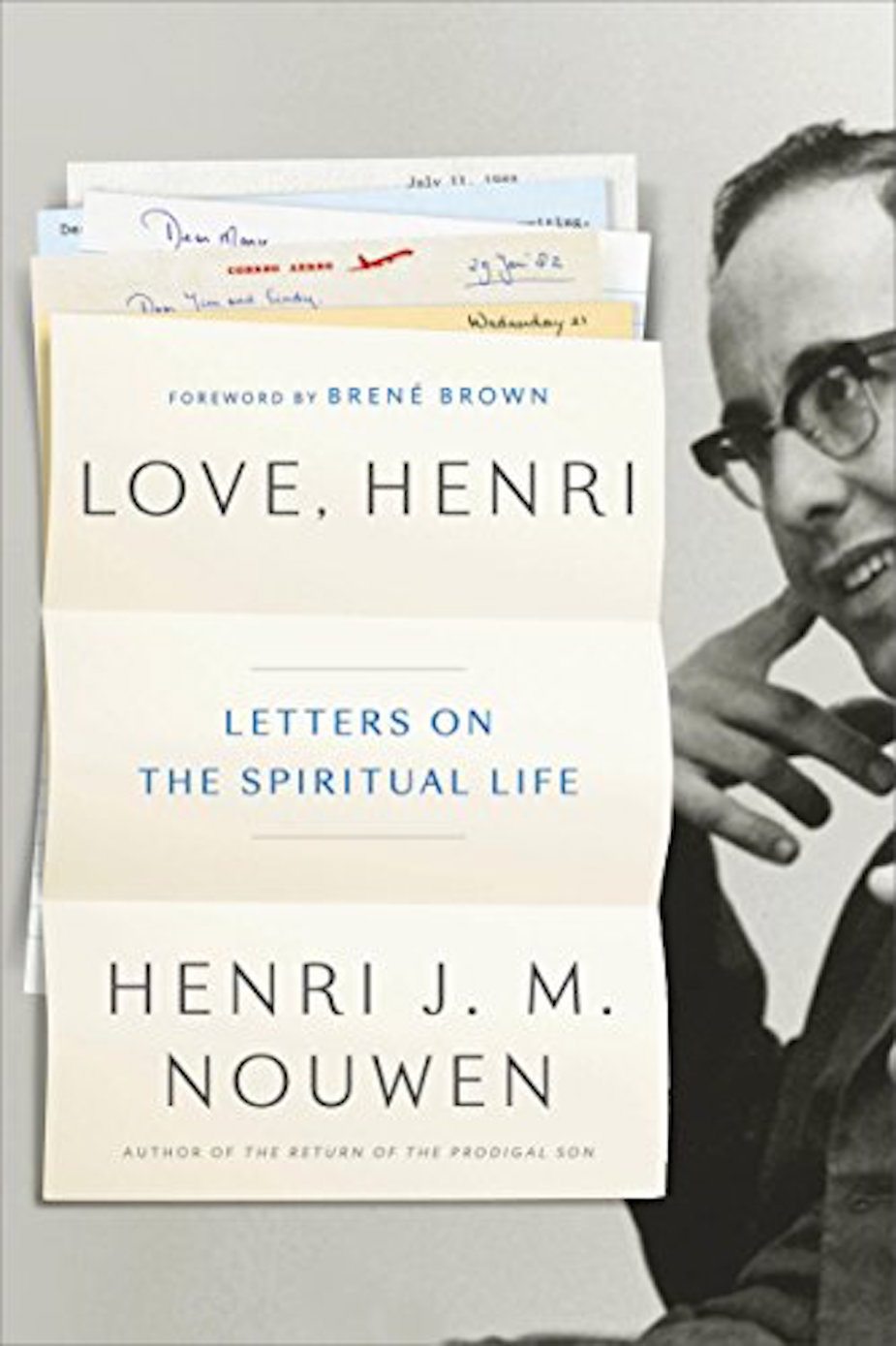 Years of Development and Inconsistency

From his days in Yale to his final months his Toronto, you see Nouwen’s spiritual and theological development as a minister in a post-Vatican II age. In the 1970s you see his discomfort in his ecumenical role at Yale. He writes to an Episcopal priest:

I am more and more convinced that there is not such a thing as an uncommitted ministry. As Christian ministers we are called to speak and act in the name of Jesus Christ. If we do not do that and become neutral enablers, I think we betray our vocation.

He later adds about having to supervise students who don’t share his belief in Christ:

[R]eal in-depth supervision asks for a mutual sharing of our faith and that we should wonder if we really can supervise people from a tradition in which Christ does not play a central role. If the student can no longer discuss his personal relationship with Christ with his supervisor, I think that no pastoral supervision can take place. Witness is and remains the central mode of ministry.

By 1982, you can see Nouwen’s growth in empathy toward the feminist movement and their critique of Roman Catholic liturgy:

The fact is that many women have left the church or are growly uncomfortable with the liturgy because of its exclusively male language. For us men this sometimes is hard to fully understand. I feel that we are called to listen carefully to the voice of the women since they want to bring us in touch with the quality of God that we may have overlooked unconsciously and unwillingly.

In 1987, one senses some universalist leanings in his answers to a reader about the nature of salvation:

I am deeply convinced that Jesus came for all people and that he took on human flesh so that all human flesh could be destined for resurrection. I, therefore, believe that all human beings are embraced by God’s love and are called to the enjoy the fruits of Christ’s redemption.

In 1992, when writing to a friend on how to prepare AIDS victims for death, he writes:

I am deeply convinced that Jesus is completely unique in the world as the full revelation of God’s life, but I also believe that many people can come to Christ even when they have never formally known Christ or had the opportunity to accept him. The final judgment, as Jesus says, is not based on whether or not they have known Jesus but whether or not the people have cared for those who are hungry, naked, prisoners, all the people in need.

In all his writings, Nouwen is never an angular, dogmatic individual, but he does change in how he relates to other religions and faiths—from more exclusive to more inclusive. The theme that sticks throughout is Jesus’s condescension and incarnation. A theology of transcendence is almost completely missing. Nouwen has a deep theology of suffering and God’s participation in it with us, but rarely does he speak of God’s exaltation and glory.

Nouwen was a deeply sensitive person, and I imagine his own struggles with his sexuality gave him the power to identify with and profoundly understand marginalized communities (the mentally handicapped, gays, women, people of color, other faith communities). I wonder, however, how much he was affected by his lack of a transcendent theology. In his writings, God—if I could put it this way—was transformed so that he could be with us. I don’t see in Nouwen’s writings much need for us to be transformed to be with God.

Before I criticize Nouwen’s thought too deeply here, I must confess something. From what I can discern from his life and writings, Nouwen was a man of deep love and compassion. He was affected by Christ’s sacrifice such that he regularly sacrificed and was present for others in their suffering. When I consider his example, a clear reality comes to the forefront: Nouwen has a small body of work for which I can critique him for lack of theological consistency. But, if given the chance, I have a much larger body of work from my own life for which Nouwen could critique me—for my regular lack of love and empathy. So then, let me put my hand over my mouth.

In the 33 years of Nouwen’s letters, a tension emerges that most every pastor faces. It’s the tension of being still at heart, yet ambitious for God’s kingdom. In most of Nouwen’s letters he encourages prayer, listening, and stillness before making decisions, reacting to being sinned against, or any number of things. Busyness was always a spiritual threat for Nouwen. “Without prayer even our ‘good busyness’ will lead to our destruction.” Elsewhere he writes, “Be sure to make inner peace your utmost priority. I say this to myself as much as to you.” His counsel is to be constant in prayer and stillness.

Yet Nouwen wouldn’t suggest inactivity as a model of Christian living. He often overextended himself and lamented his “busyness” which led to burnout. It seemed many of his letters were written from retreat.

Nouwen often extended himself for relationships as well. Friendships with him could be demanding; he pushed some away with his intensity and expectations. For years, you see a discernible pendulum swing in Nouwen’s life of extending himself for mission and friendship, followed by retreat and stillness.

Nouwen is a witness to this perennial tension. I don’t think he’s always an exemplary model, but he at least shows us what the fight looks like. For young pastors, many of us have experienced burnout. So we retreat to writers who talk to us about stillness and retreat. We question our ambition and rhythms. We’re drawn to writers like Nouwen, Eugene Peterson, or (more recently) Zack Eswine. Sometimes this response leads to self-indulgence, and we’re surprised at the mission creep in our own lives and churches. So the pendulum swings wide, and burnout returns, leaving us thirsty for the stillness of retreat. Somewhere in Nouwen’s life was the struggle to be ambitious for the kingdom, yet still at heart. It’s a worthy struggle to consider.

Nouwen’s letters are a study in pastoral theology. He counsels through them. To one friend, he writes:

One of the greatest vocations we as Christians have is to pray for others. . . . My sense is that you will be closer to the Lord Jesus the more you pray for others, because Jesus came for others and praying for others is entering more deeply into the mystery of his divine intercession.

His advice covers a range of themes:

Nouwen’s letters are a good example of a pastoral heart applied to personal suffering. He seemed busy and ambitious, yet he somehow found the time to write and invest his imagination into the lives and pain of his friends. Nouwen had the meekness of Christ. We don’t commonly use that term today, but Jesus found it helpful when attracting weak people to himself: “Come unto me all who are weak and weary, and I will give you rest . . . For I am meek and lowly of heart” (Matt. 11:28–29). Meek people attract weak people who, in turn, find rest and healing.

1 How to Improve Your Preaching

2 The Satanic Doctrine of a Wrathless Cross

4 Enough with ‘I Am Enough’