“Pesky Calvinists,” the sort who frequent the Passion Conference and The Gospel Coalition, prompt Scot McKnight’s e-book A Long Faithfulness: The Case for Christian Perseverance. Concerned with their core doctrinal belief—what he calls the “meticulous sovereignty view”—McKnight aims to sever the nerve that energizes resurgent Calvinism’s teaching that God determines everything, including “who gets saved.” Also concerning for McKnight is a concomitant interpretation of natural disasters that would suggest “God decided, desired, and carried out the weather conditions, the speed and direction of the winds, the deluges of water, and precisely which homes would be destroyed and which homes would escape” (38).1 He finds odious the notion that God would determine—not merely permit—human suffering, including the abuse of girls and boys.

Though McKnight targets this view of determination, his approach is oblique, for he challenges God’s sovereignty with regard to salvation—“whether or not humans can both choose for God and then later choose against God.” In his aim to refute the doctrines of unconditional election and meticulous sovereignty, McKnight extrapolates on the premise that the “debate about meticulous sovereignty, at times, hangs on how best to read the Warning Passages in the book of Hebrews” (249).

The professor of New Testament at Northern Seminary in Lombard, Illinois, recounts his experimentation with Calvinism while in college, which ended after reading I. Howard Marshall’s Kept by the Power of God in seminary. The chapter on warnings in Hebrews convinced McKnight that “genuine believers can lose their faith by throwing it away consciously. The evidence of the Bible defeated my Calvinism” (215–16). More specifically, he recalls, “I came to the conviction that meticulous sovereignty was defeated by the Bible itself” (211–212); indeed, he adds, “focus on God’s meticulous sovereignty very quickly becomes much less a doctrine of grace than a doctrine of control and theodicy that somehow manages to make grace and love arbitrary and cold” (236–237). Late in the book McKnight reveals that “the meticulous sovereignty” view he targets is “the Calvinism [he] had previously embraced” (851–852). 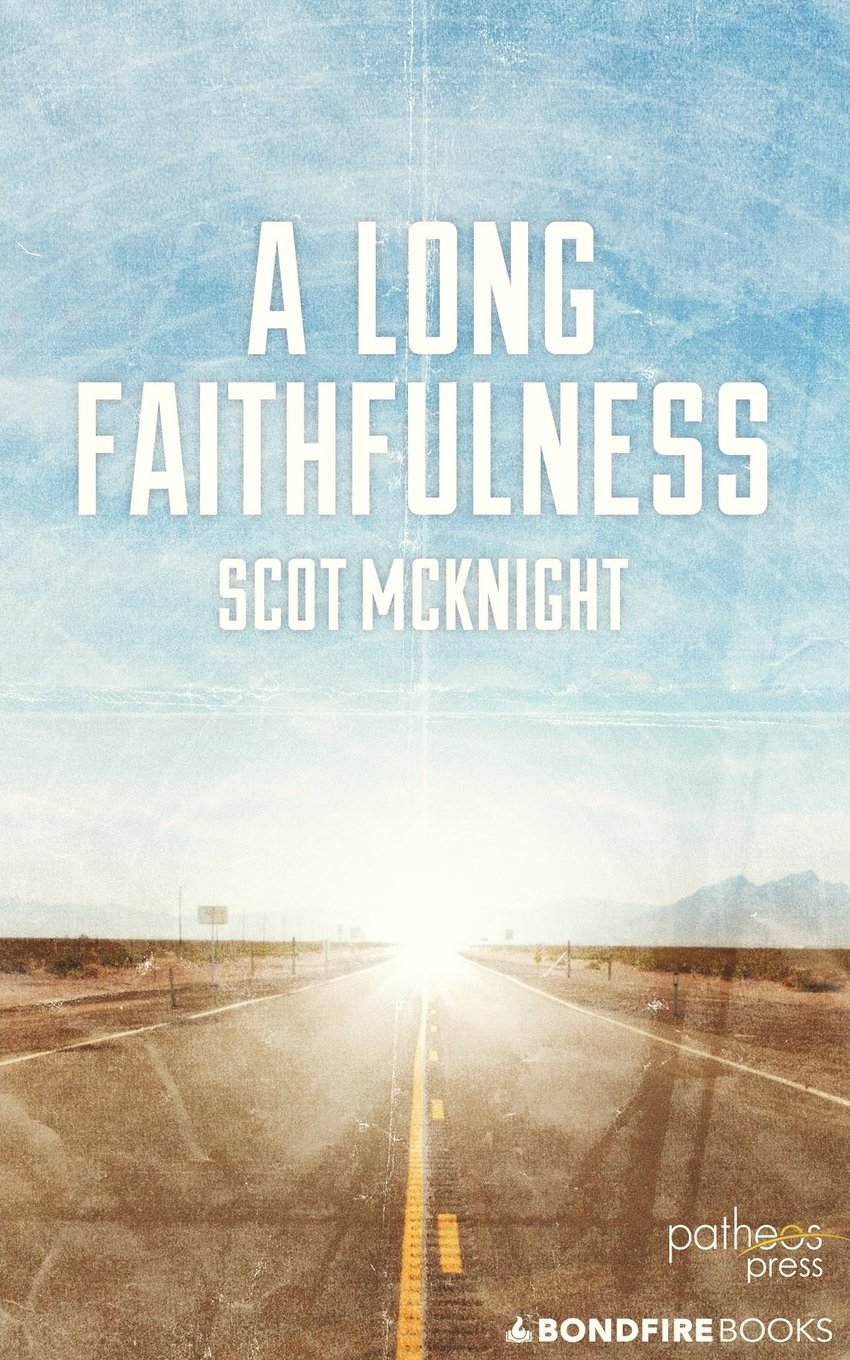 A Long Faithfulness: The Case for Christian Perseverance

A Long Faithfulness: The Case for Christian Perseverance

Concerning the warnings in Hebrews, McKnight reasons, “[I]f we let these passages say what they really do say we cannot believe in meticulous sovereignty. These passages teach us that God’s sovereignty entails his decision to give humans the freedom to choose God and even after choosing God to walk away from that choice and un-choose God” (498–500). Given his reading of the warnings, McKnight claims that Scripture counters belief in meticulous sovereignty since God has “surrendered an element of sovereignty to humans because he values their freedom” (870). These warnings, he concludes, teach that even Christians can resist God’s grace—that believers “can choose to un-choose God and walk away from God’s grace” (881).

Calvinists ought to heed McKnight’s pastoral concern about turning divine election into a cause célèbre. Lamentably, headiness and reduction of Calvinism to logical syllogisms around the “five points” allures many fresh devotees for whom zeal tends to exceed understanding and wisdom. Too easily, advocates—especially novices—exaggerate divine election disproportionate to its proper biblical-theological magnitude, place, and function. Such a view turns God’s unconditional election and foreordination of all things into a systematic-theological boilerplate for preemptively assigning causation of natural disasters to God’s inscrutable purposes—even while people are perishing. Wisdom calls for judicious, timely, and pastoral appeal to God’s sovereignty as divine consolation, not as a cudgel of logic—particularly in the wake of calamity.

However, McKnight’s conclusion that Hebrews’ warnings prove God does not determine all things, including who will receive salvation, exceeds the biblical evidence he considers. His argument is too oblique to cover such a vast concept—essentially the problem of evil. He doesn’t engage passages that speak to how calamities fit within God’s purposes. Nor does he comment on Scriptures that address God’s electing grace, foreordination, and eternal purpose. McKnight has restricted his purview too much to draw his large theological conclusion that God doesn’t determine everything, including the calamities that befall his creatures. A satisfactory argument to the contrary would never confine itself to Hebrews. For McKnight to prove his case, he’d have to address large swaths of Scripture, both Old and New Testament, for numerous passages inform us concerning the place of tragedies within God’s purposes.

I believe McKnight misses his target, for I’m persuaded the biblical text doesn’t warrant his interpretation of the warnings. He contends that the warnings imply believers can apostatize and perish, which, he believes, severs the nerve of belief that God will preserve every believer in his Son unto salvation on the Last Day. Expressed more forthrightly, McKnight argues that divine warnings (cast as future-oriented suppositions) should be understood as divine assertions (recast as future-oriented indicatives). Surely, McKnight doesn’t realize he recasts warnings as assertions. Nevertheless, consider the second warning (Heb 3:7–4:13), which essentially states: “If you do not obey you will not enter into rest.” Into this future-oriented supposition McKnight injects the assumed implication of possibility: “The author thinks believers can disobey in such a way that they do not enter the rest” (785–786).

McKnight contends the warnings announce it’s possible that the good news of God’s inviolable oath and promise can be made violable by believers who fail to persevere in belief. Against McKnight’s approach, however, gospel warnings do not counter apostasy by calling into question the inviolability of God’s promise and oath. Rather, gospel warnings serve gospel promises; the warnings complement the promises. Warnings counter apostasy by reissuing the gospel’s call to believers in the form of threats of impending eternal judgment unless believers persevere in faithfulness to God who promises (cf. Heb 6:4–12). Warnings, then, remind believers that God’s oath and promise are inviolable (cf. Heb. 6:13–20). Tom Schreiner and I illustrate how warning serves promise from Paul’s announcement of God’s promise that no life onboard the ship would be lost in the storm (Acts 27:21–26) followed by Paul’s urgent warning: “If these men do not remain in the ship, you are not able to be saved” (27:31).2 The warning neither mitigates nor nullifies God’s promise; instead, it serves the promise, for God accomplishes what he promises through the use of means, not by fiat or by force. So it is with the gospel’s numerous admonitions and warnings: if we fail to persevere in faithfulness to Christ, we will perish.

On the other hand, McKnight rightly rejects a popular Calvinist interpretation of warnings that superimposes the apostle John’s retrospective assessment—“they went out from us, but they did not really belong to us” (1 John 2:18-19)—as a template to explain future-oriented warnings. This reading reorients threats against apostasy into cognitive appraisals that those who fall away show they never belonged to God’s people. McKnight’s concern is warranted, as Schreiner and I argue in The Race Set Before Us: A Biblical Theology of Perseverance and Assurance. This popular Calvinist interpretation recasts the conditions and the consequences of the warnings. For various reasons, including a retrospective view of salvation that doesn’t grasp its “already but not yet” nature, many conceptually alter “If we fail to persevere, we will perish” into “If we fail to persevere, this will prove we were never truly saved.” McKnight correctly rejects this explanation of the warnings in Hebrews.

I agree in form but not fully in content with the three reflections with which McKnight concludes his argument from Hebrews: (1) renewed fear of God; (2) to present the gospel by calling for persevering belief; and (3) that holding his view on perseverance doesn’t mean believers contribute anything to their own salvation. As for the second point, I’m persuaded every admonition and warning to persevere in faithfulness is the drawn-out initial call of the gospel, for saving faith invariably perseveres. This is McKnight’s point: “The summons to believe is a summons to continue believing for life, not just once and for all in a singular moment” (859–860). How this agrees with his earlier assertion, I’m not sure: “Perseverance is the thrust of the exhortation. If that is true, then there is an immediate conclusion to draw: one does not need to call a non-Christian to persevere. I believe the exhortation to persevere is an exclusively Christian faith and moral concern” (594–596).

McKnight’s e-book is accessible in price, content, and form. My disagreements don’t restrain me from encouraging wide readership, for McKnight is right when he affirms: “For the classical Calvinist and the Arminian—and I know this may sound like a bundle of hooey to many—there is precious little difference when it comes to the necessity of perseverance. Both believe that perseverance is necessary” (847–849). Amen!

2 See Schreiner and Caneday, The Race Set Before Us: A Biblical Theology of Perseverance and Assurance, 209–212.

​Ardel Caneday is professor of New Testament and Greek at the University of Northwestern in St. Paul, Minnesota. He is co-author of The Race Set Before Us: A Biblical Theology of Perseverance and Assurance (IVP Academic, 2001), co-editor of Four Views on the Historical Adam (Zondervan, 2014), and a regular contributor to Credo.