If a man spends over 40 years faithfully teaching and writing on the doctrine of Scripture, you pay attention when he releases a book containing decades of refined reflection. With his latest work, Light in a Dark Place: The Doctrine of Scripture, John Feinberg—professor of biblical and systematic theology at Trinity Evangelical Divinity School—offers Christians a comprehensive guide for understanding the theological foundations of an evangelical doctrine of Scripture, as well as effective tools for engaging the contemporary discussion.

While I marked many useful sentences in this nearly 800-page book, I found Feinberg’s treatments of illumination and perspicuity, along with his moving testimony of Scripture’s power in his own life, especially enlightening. I’m also grateful for the footnotes at the outset of each major section that include books and articles Feinberg found helpful in his research. With these recommended-resource lists and the book’s massive Scripture and topic indices, Light in a Dark Place is an exceptionally valuable source for research, teaching, spiritual growth, and theological development.

In a book this size, there are many topics to which I could attend. Given the present evangelical discussion over the doctrine of Scripture, however, I will narrow my focus to one issue: the doctrine of inerrancy.

While giving significant attention to all the major categories that compose a full doctrine of Scripture (revelation, inspiration, authority, illumination, canonization, perspicuity, sufficiency, effectiveness, and preservation), Feinberg devotes three chapters (155 of 770 pages) to the doctrine of inerrancy. This emphasis is due, of course, to its importance in the whole of Christian theology and the fact that inerrancy has been a point of much disagreement and discussion among professing evangelicals since the early 1970s (percolating as early as the 1950s).

When Feinberg started formally teaching the doctrine of Scripture in 1976, he labored from the settled assumption that the inspiration of Scripture required the inerrancy of Scripture. Soon he realized some fellow evangelicals were questioning the validity of this presupposition.

Inerrancy belongs to the text as it was originally penned and as it is rightly interpreted.

While 40 years of debate has done much to solidify evangelical views concerning inerrancy (consider, for example, the Chicago Statement on Biblical Inerrancy and the many books and institutions that use the CSBI as the primary reference point for their position on Scripture), there’s also a steady effort by evangelical errantists to revive old arguments and offer fresh critiques of the doctrine. Current developments require extended reflection on this topic.

Feinberg begins his discussion of inerrancy by offering straightforward definitions of truth and error: “Any assertion that matches reality is true or inerrant, and any claim that does not correspond to reality is false or errant” (232). To say that Scripture is inerrant, then, is to say that the Bible, as it was originally written, only teaches what is true—i.e., that which corresponds to reality—and never teaches what is false. Inerrancy, then, can only be the characteristic of a Bible that is correctly interpreted (239). Foisting standards of precision that weren’t intended by the biblical authors or failing to grasp a given writer’s use of language may cause one to draw wrong conclusions about what the biblical text is teaching. Inerrancy, then, belongs to the text as it was originally penned and as it is rightly interpreted. 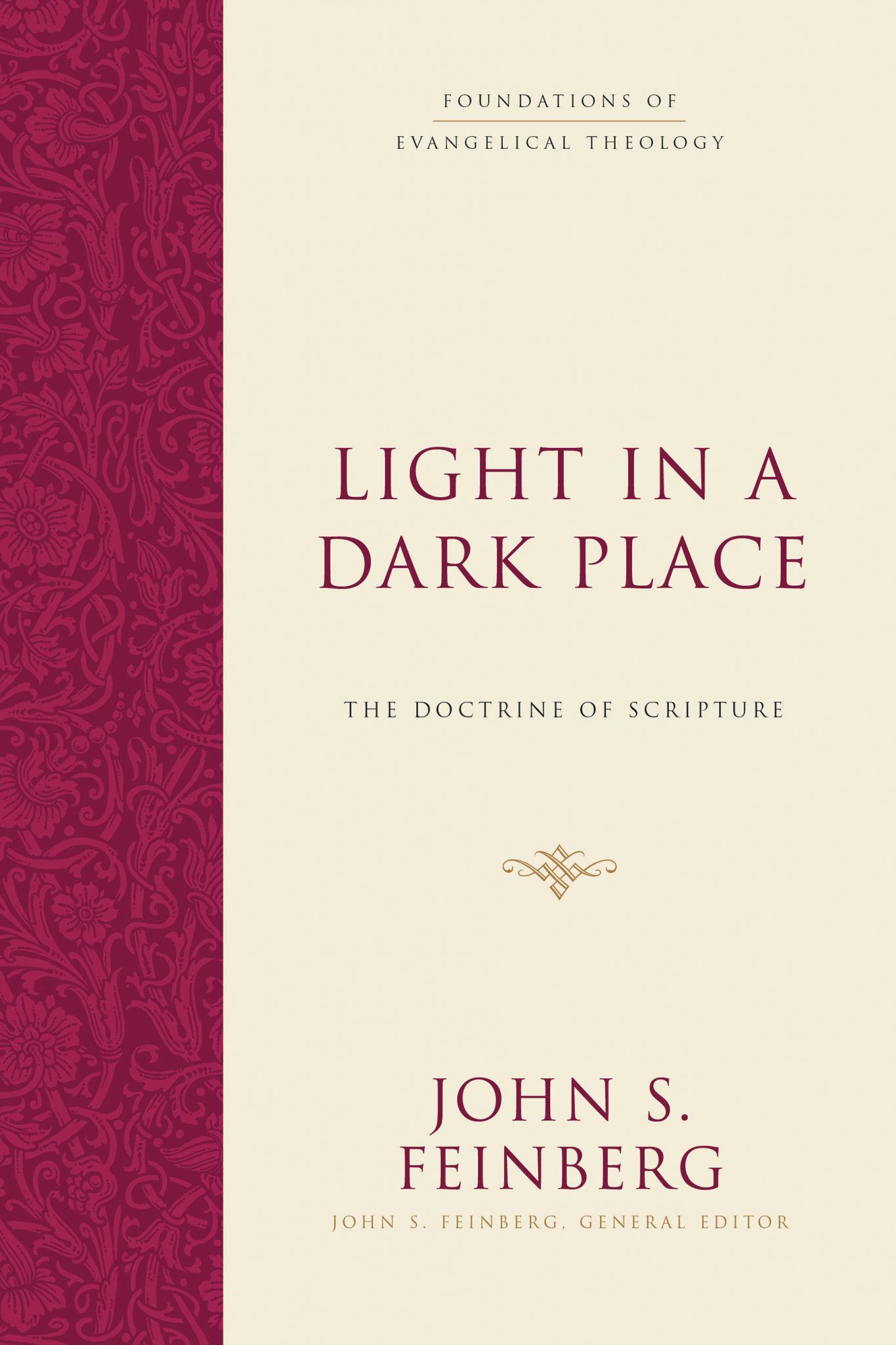 Light in a Dark Place: The Doctrine of Scripture

Light in a Dark Place: The Doctrine of Scripture

What we believe about the Bible is foundational to every part of life. Scripture is the very Word of God, the final authority for all of theology, the governing source of all other doctrines. In the latest volume of the Foundations of Evangelical Theology series, theology professor John S. Feinberg has written a landmark work on the doctrine of Scripture, offering a robust, serious treatment of topics such as revelation, the canon, inerrancy, infallibility, sufficiency, preservation, and more—all with the goal of helping readers cherish, obey, and be transformed by what God has spoken in his Word.

What is most helpful in Feinberg’s treatment of inerrancy, however, is his contrast between the so-called inductive and deductive approaches. Over the past few decades, opponents of inerrancy have faulted inerrantists for constructing their doctrine on assumptions about the biblical text rather than evidences in the biblical text itself.

According to evangelical errantists, one’s method for determining whether the Bible contains errors should begin with the phenomena of Scripture—that is, Scripture as it really is. Discrepancies in the Gospel accounts, seeming mistakes in Old Testament narratives, and apparent scientific and botanical blunders should be consulted first and included in our doctrinal formulation, not discarded due to a prior commitment to an error-free Bible.

Feinberg agrees that the phenomena of Scripture should be consulted in crafting our theology of Scripture. The real question, however, “is which are the phenomena that are relevant to this topic?” (292, emphasis original). A classic example of how errantists have appealed to biblical phenomena to bolster their case is Jesus’s use of a mustard seed in his teaching on the kingdom of God. Jesus said that the mustard seed is the smallest of all seeds (Matt. 13:32; Mark 4:31). We know today that the mustard seed isn’t the smallest of all seeds (apparently some rainforest orchids produce seeds the size of dust particles). Therefore, this statement in the Gospels is an error. It’s a minor error—even insignificant in the grand scheme of redemption—but it’s an error nonetheless.

While Feinberg agrees that this and similar texts should be taken into account when formulating a doctrine of Scripture, it’s flawed methodology to take such passages as the foundational texts on which we build our understanding of Scripture. Why is this the case? Because when formulating a doctrine, we must first first consult the texts that speak directly to that specific doctrine—and then investigate other passages. Feinberg explains:

If I want to know what Scripture teaches about its own inspiration and inerrancy, I must first attend to passages that actually address those issues, not to a passage about the nature of the kingdom as explained by a parable whose point is not to present a botanic fact about the size of a mustard seed in comparison to other seeds. (292, emphasis original)

The claim that Scripture contains formal errors can’t stand in light of what Scripture teaches about its own inspiration and inerrancy.

This approach doesn’t imply that we dismiss apparent problems in the biblical text or cling to an a priori assumption without (or against) the evidence. But how we approach these difficulties will be determined, in large measure, by the way we assign priority to a given set of passages in our theological formulations. Feinberg continues:

Of course, if passages that don’t address the topic appear in some way to falsify the teaching of passages that do address the doctrine, we cannot simply ignore the “problem” passages. They must be explained so as to be consistent with what passages that directly address the doctrine say. But it makes a world of difference as to whether the normative passages’ teachings are assumed innocent until proven guilty, or assumed guilty until proven innocent. . . . [N]either I nor most evangelicals who espouse inerrancy adopt it as a presupposition without any proof. . . . When you join passages that teach that Scripture is true with the definition of inerrancy as truthfulness, the passages referenced amount to saying Scripture is inerrant. (293, 295)

When we come to a difficulty in a biblical text, therefore, our hermeneutical posture should be one of deference to Scripture’s inerrancy, not the expectation that we will likely discover an error. When we approach Scripture with the former mindset, we’re able to offer solutions to these problems that comport with inerrancy and are simultaneously exegetically rigorous and contextually honest. In the case of Jesus and the mustard seed, it’s legitimate to see Jesus’s statement as a kind of figure of speech—perhaps hyperbole—to emphasize his point:

Jesus’s point is that something very small and insignificant at the outset when it has fully grown is a very large and beautiful thing (literally true of the kingdom heaven). The point of the analogy between the kingdom of heaven and a mustard seed would have been lost if Jesus had chosen a larger seed or if he had been scientifically precise and had named the very smallest seed of all, perhaps unknown to his audience. (240)

The above solution certainly fits Jesus intention in the parable and makes sense of the passage, though some errancy proponents may see such interpretive efforts as special pleading. This is likely the case because the real difference between errantists and inerrantists, as Feinberg notes, isn’t about whose method is inductive and whose is deductive (or whose is objective and whose is subjective), because there are elements of each approach in both camps (see 114–15). The crux of the disagreement is over what verses and passages are the foundational texts for determining what the Bible teaches about its own nature.

Feinberg concludes that evangelicals are right to establish inerrancy on biblical texts that speak most directly to the topic. The claim, therefore, that Scripture contains formal errors—whether significant or not—can’t stand in light of what Scripture teaches about its own inspiration and inerrancy.

Light to Our Path

Feinberg’s use of “light” as the controlling metaphor for his doctrine of Scripture was well chosen. Throughout the Bible, God’s Word is described as a light that illumines our path (Ps. 119:105), leads us in the way of life (Prov. 6:23), and shines in the darkness of sin and doubt (2 Pet. 1:19). Occasionally, however, light can be obstructed, no matter how intense it shines.

Feinberg has labored for 770 pages to help remove some of these obstructions so we might continually enjoy the illuminating power of God’s Word. Fittingly, Light in a Dark Place is full of Scripture from beginning to end and concludes with a personal testimony of Scripture’s enduring effectiveness in the author’s own life. Thank you, Dr. Feinberg.