Eric Metaxas has written a provocative book for a large audience. In Letter to the American Church, he assumes a prophetic role—the American church, he warns, is committing the same mistakes in the 2020s as the German church did in the 1930s. If we continue course, similar catastrophic consequences await. By choosing silence, German pastors facilitated the rise of Nazism—and the innocent blood of millions is on their hands. The current complicity of the American church, especially its pastors, leads to similar red-handed guilt (45–46). As a best-selling Christian author and host of a nationally syndicated radio program, Metaxas has cultivated a wide influence and this book will be well received by his many fans.

Despite elements of truth, I offer four cautions to Christians, especially pastors, who will encounter the arguments in this book. 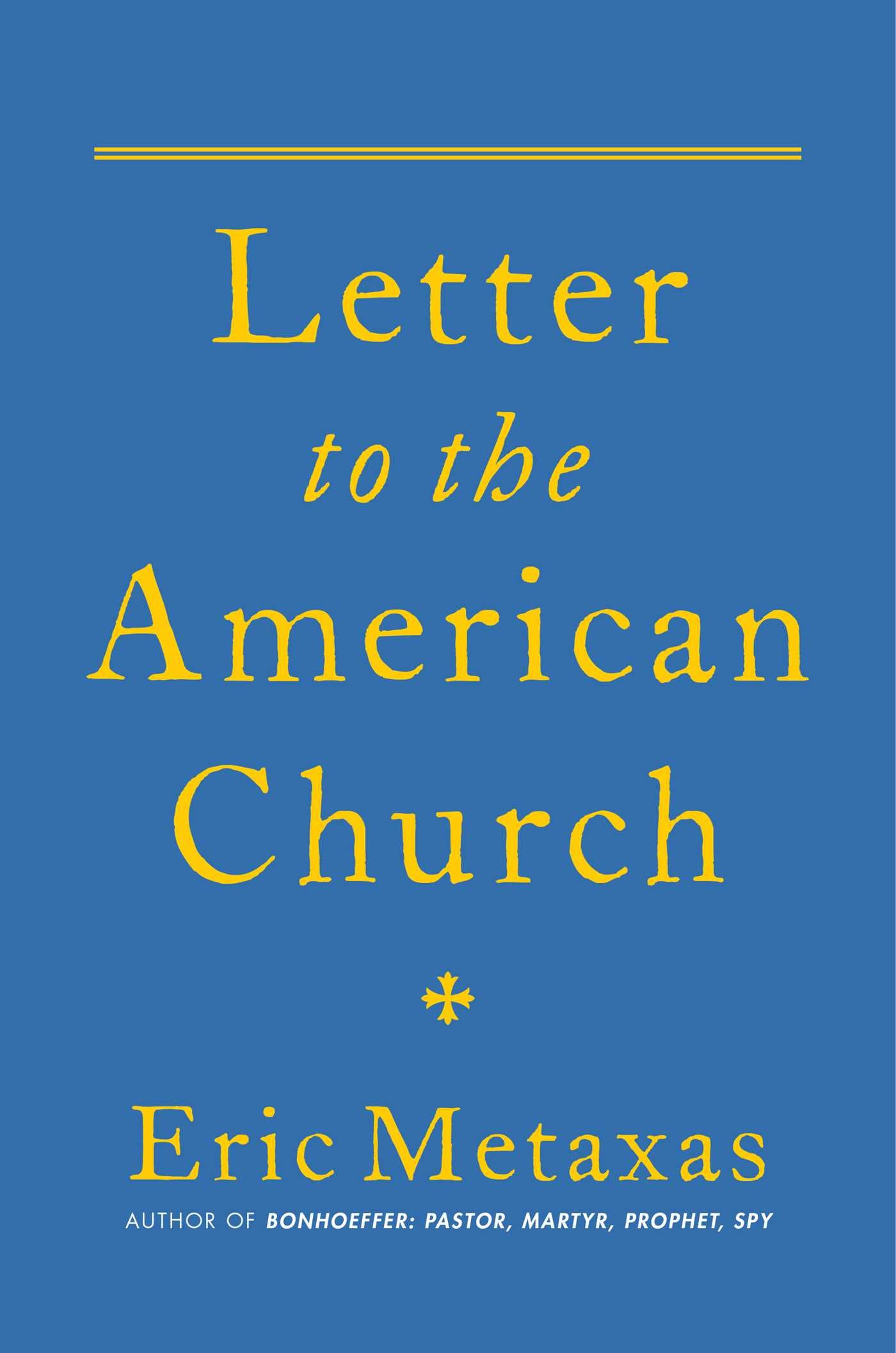 Letter to the American Church

Letter to the American Church

The author of a bestselling biography of Dietrich Bonhoeffer, Metaxas reveals the haunting similarities between today’s American Church and the German Church of the 1930s. Echoing the German martyr’s prophetic call, he exhorts his fellow Christians to repent of their silence in the face of evil.

God calls us to defend the unborn, to confront the lies of cultural Marxism, and to battle the globalist tyranny that crushes human freedom. Confident that this is His fight, the Church must overcome fear and enter the fray, armed with the spiritual weapons of prayer, self-sacrifice, and love.

In his best-selling biography, Bonhoeffer: Pastor, Martyr, Prophet, Spy, Metaxas generated wide interest in German pastor and theologian Dietrich Bonhoeffer. Written at a popular level, the book appealed especially to evangelicals who found in Bonhoeffer a new hero whose costly discipleship compelled a courageous stand against an evil government.

At the academic level, pastors should be aware the reviews were not as generous. Bonhoeffer scholars noted the book’s historical inaccuracies and revisionism. By overlooking key doctrinal deficiencies, Metaxas presented a Bonhoeffer whom evangelicals could nearly call one of their own. In Letter, Metaxas presents the same Bonhoeffer—but with an ironic twist that readers may not notice.

Here’s the irony: While Metaxas wants us to find in Bonhoeffer an inspiration to resist the church’s enemies on the political left, Bonhoeffer was actually resisting the church’s enemies on the political right. Far from promoting what Metaxas calls “Marxist atheist philosophy” (5), Hitler opposed it as a Jewish conspiracy. Metaxas knows this. In Bonhoeffer, he noted that many pastors in Germany willingly overlooked Hitler’s deadly flaws because they wanted a powerful German church and a “‘Christianity’ that was strong and masculine, that would stand up to and defeat the godless and degenerate forces of Bolshevism” (151). If the global aim of Marxist ideology was one of the problems, then German nationalism—infused with empty Christian rhetoric and fueled by conspiracy theories—was one of the solutions.

Metaxas’s application is fair because we should oppose unbiblical ideology on every front. But given this historical context, it seems odd—and intentional—that Metaxas offers no thoughtful caution to the church or its pastors regarding this lesson from history: while fighting real threats on your front, don’t forget to cover your rear.

It’s not just that Metaxas goes too far in his application—he doesn’t go far enough. Yes, pastors, let’s warn our people about dangerous tenets in CRT, LGBT+ activism, and the Black Lives Matter movement. But faithfulness in ministry means we should also be aware of—and guard against—other kinds of threats that arise against the church from a variety of directions.

Metaxas believes desperate times call for desperate measures. To put candidates in power who will “enact policies to help people” (121), Christ-followers may need to “vote for someone whom others may criticize for being guilty of this or that” (121). He intimates that Christians may even need to “tell a lie for the larger good” (120). Christians can do these things because we serve “a God who has a wildness and unpredictability to him” (123). And like Bonhoeffer in opposition to Hitler, violence may be necessary (78, 109).

Are we willing to sacrifice the church’s mandate to be a pillar of truth by trafficking in lies for political gain?

Metaxas has now ranged into the sophisticated discipline of moral theology and may be in over his head. Christian ethicists have long debated the biblical position on when, where, and how to deceive and employ violence. But his brief and selective tour of the subject provides unwarranted justification for Christians with a shallow understanding of biblical ethics to do sinful things. Metaxas unfortunately practices what he preaches, and his words are reckless and dangerous in our polarized cultural moment. Are we willing to sacrifice the church’s mandate to be a pillar of truth (1 Tim. 3:15) by trafficking in lies for political gain?

While Metaxas often acknowledges the influence of the “great Charles Colson” (6, 43), he seems to reject the counsel of Colson, who wrote,

If we have learned anything in recent decades, it is that we should not roll out heavy-handed political movements that recklessly toss around God-and-country clichés and scare off our secular neighbors. Our goal is not to grab power and impose our views. Instead, we should act through principled persuasion and responsible participation.

3. Look to Jesus, not Bonhoeffer, as your standard.

Metaxas’s understandable admiration for Bonhoeffer is palpable, but there’s a fine line between biography and hagiography. We measure pastoral ministry by the standards of the Chief Shepherd and the apostles, not an evangelical version of a dead Lutheran pastor. Metaxas doesn’t hesitate to call out pastors he judges to be weak, timid, cowardly, or so “theologically fussy” (44) that they don’t join his movement. Men like Tim Keller, Alistair Begg, John Piper, and John MacArthur are not Bonhoeffer-ish enough for Metaxas (11, 44).

We measure pastoral ministry by the standards of the Chief Shepherd and the apostles, not an evangelical version of a dead Lutheran pastor.

Though Tim Keller wrote a generous introduction for Bonhoeffer in 2011, things changed by 2022. In a recent tweet, Metaxas expressed approval for this rhetorical question: “What if Rick Warren, Andy Stanley, and Tim Keller are Hitler’s favorite kinds of pastors?” This is exactly the kind of slander and careless speech that fuels the fracturing of American evangelicalism.

Historically, we evangelicals were known for our theological agreement on the authority of the Bible, the centrality of the cross, the necessity of conversion, and the priority of working together for the global advance of a culture-shaping gospel. When we disagreed, we were to follow biblical protocol to resolve our conflicts and to maintain our witness before an unbelieving world. Now we’re widely known as a powerful voting bloc to be courted, often imitating our political heroes and attacking one another on Twitter.

The insinuation is clear. If, as a matter of conscience, pastors choose doctrinal integrity over political solidarity? Well, you know, Hitler. If pastors don’t publicly endorse candidates on the right? Well, Hitler. If pastors acknowledge nuance in political arguments? Hitler. This kind of lazy thinking and careless accusation (which may typify some conservative talk-show hosts) falls far short of the biblical standard for godly speech.

Metaxas’s repeated shaming of pastors who are “cowardly,” “timid,” and “afraid to speak” the truth (8, 9, 10, 42, 90) may be effective with insecure pastors. I agree there are cowardly pastors in America; I don’t want to be one of them. But Letter frequently makes unfair generalizations.

In the chapter titled “The Idol of Evangelism,” Metaxas contends that “there are some who have this fixed idea that evangelism is the most important and really the only thing worth doing” (76). But this is a straw man. What pastor truly believes this?

Pastors are required to “do the work of an evangelist” (2 Tim. 4:5) and “equip” believers to, among other things, evangelize (Eph. 4:12). I don’t know any pastors who complain that church members are so committed to evangelism that they make it an idol. Metaxas is concerned Christians are using evangelism as an excuse to avoid politics. I’m concerned Christians are using politics as an excuse to avoid evangelism. If many of today’s evangelicals were as passionate about telling people about Jesus as they were about telling people how to vote, we might see a genuine, culture-transforming revival.

If a pastor faithfully preaches the Word—wisely tackling tough issues from the horror of abortion to the incoherence of transgenderism to the pitfalls of nationalism—but doesn’t publicly engage in partisan politics the way Metaxas calls for, does that pastor really lack courage?

Ironically, none were more compliant than the religious leaders. Of all the people, they should have been the most aware of the sinful nature of man and the least overwhelmed by pomp and protocol. But theological knowledge sometimes wilts in the face of worldly power.

Yes, of all people, they should have been most aware. Since our nation’s inception, a common and effective strategy on both left and right has been to praise and pressure American pastors into serving a partisan political agenda. Letter to the American Church is swept up in that strategy. In many evangelical churches, it will require great pastoral courage to say so.

Pastors, preach the Word and don’t get played.

Steve Bateman (ThM, Dallas Theological Seminary; DMin, Reformed Theological Seminary) has been senior pastor of First Bible Church in Northern Alabama for 30 years and is the author of Which ‘Real’ Jesus? Jonathan Edwards, Benjamin Franklin, and the Early American Roots of the Current Debate (2008) and Brothers, Stand Firm! Seven Things Every Man Should Know, Practice, and Invest in the Next Generation (2014). Steve and his wife, Lori, have two children and three grandchildren. You can follow him on Twitter.