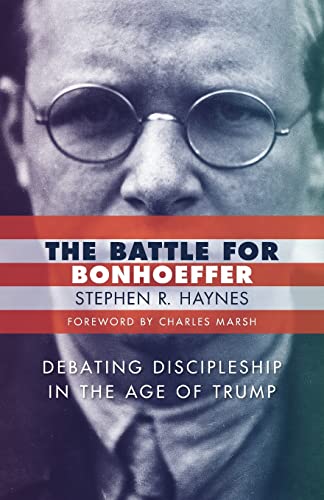 The Battle for Bonhoeffer: Debating Discipleship in the Age of Trump

Over the past 15 years, Stephen Haynes, Professor of Religious Studies at Rhodes College in Memphis, Tennessee, has been the leading surveyor of the cultural reception of Dietrich Bonhoeffer in the United States. Haynes’s work has demonstrated the varieties of Bonhoeffer interpretation from various segments of the theological spectrum, ranging from the liberal Bonhoeffer to the conservative Bonhoeffer. In particular, Haynes’s work The Bonhoeffer Phenomenon: Portrait of a Protestant Saint (Minneapolis: Fortress, 2004) mapped out the territory of Bonhoeffer reception, indicating the ways in which various theological traditions tend to focus on particular works of Bonhoeffer while downplaying others, and demonstrating that Bonhoeffer’s theology has been notoriously easy to bend towards the readers’ predilections. In The Battle for Bonhoeffer, Haynes continues his project of surveying the use of Bonhoeffer in America by focusing on the evangelical reception of Bonhoeffer in the era of Trump, analyzing how Bonhoeffer has been utilized in the political and cultural battles raging in the lead up to and during the first stages of the Trump presidency.

Haynes then turns to evangelical reception of Bonhoeffer during and after the Bush presidency, with the hinge figure in this story being Eric Metaxas, who established a new audience for Bonhoeffer in popular evangelicalism through his best seller Bonhoeffer: Pastor, Martyr, Prophet, Spy (Nashville: Thomas Nelson, 2010). Metaxas offered a full-throated endorsement of Bonhoeffer as a foil to the liberal cultural dominance of the Obama years, providing a picture of Bonhoeffer as one who was aligned with the evangelical cause and so able to guide evangelicalism through the sense of being under attack in the American culture. Haynes continues the book by tracking “the Bonhoeffer moment” in evangelicalism, by which he refers to the increase in engagement with Bonhoeffer in the era of the Trump presidency. He shows that numerous influential evangelical commentators, often dependent upon Metaxas’s depiction of Bonhoeffer, appealed to Bonhoeffer in the key issues of the culture wars and the evangelical desire to maintain power and influence over the culture. A populist Bonhoeffer has arisen in the intersection of Metaxas’s biography and the rise of Trump. Haynes offers a searching critique of this populist Bonhoeffer, demonstrating the incompatibility of this figure with the historical Bonhoeffer.