Pop quiz: In two sentences or less, give me a biblical definition of the kingdom of God.

If asked that question and handed the mic, what would you say? Perhaps something about heaven or the millennium or social justice? Or would you, like Patrick Schreiner once did in college, stammer incoherently? It seems that for many Christians, the kingdom of God is “within them,” and they can’t quite put it into words.

Schreiner wasn’t satisfied with his fumbling college answer, and he went on to do his PhD on the topic at The Southern Baptist Theological Seminary under Jonathan Pennington, also known for his work on the kingdom. Schreiner is now assistant professor of New Testament at Western Seminary in Portland, Oregon. And in his new book, The Kingdom of God and the Glory of the Cross, he proves himself more than capable of answering the question that once stumped him.

The Kingdom of God is the sixth release in Crossway’s Short Studies in Biblical Theology series, edited by Dane Ortlund and Miles Van Pelt, and it comes on the heels of T. D. Alexander’s The City of God and the Goal of Creation (which I reviewed here). At 143 pages of text, it represents a helpful return to form for the series after Alexander’s lengthier (though excellent) offering.

As a study in “biblical theology,” The Kingdom of God traces its theme throughout the Bible’s entire storyline and canon. I found its structure to be the most helpful in the series so far, so let me lay it out in full. There are two parts, each containing three chapters. Part 1, “Kingdom in the Old Testament,” consists of the following:

Part 2 covers “Kingdom in the New Testament.” It runs thus:

Note that in the Old Testament, The Kingdom of God follows the order of the Hebrew canon; it’s the first book in the series to do so. This rare feature (along with some of its highlighted themes) makes The Kingdom of God feel like a lay-level version of Stephen Dempster’s Dominion and Dynasty (a book that has clearly influenced Schreiner).

It allows Schreiner to highlight connections that are lost when the Hebrew order is changed, such as the similarities between Genesis and Chronicles, the first and last books in the Hebrew canon.

This structure also allows Schreiner to give adequate attention to the kingdom in the Wisdom Literature, Acts, and the Pauline epistles. As Schreiner points out, “Most biblical theologies that speak of the kingdom have embarrassingly little to say about these sections” (22). His treatment of the Wisdom Literature as “life in the kingdom” is especially helpful. This canonical balance may well be the single greatest contribution of Schreiner’s book over similar volumes. 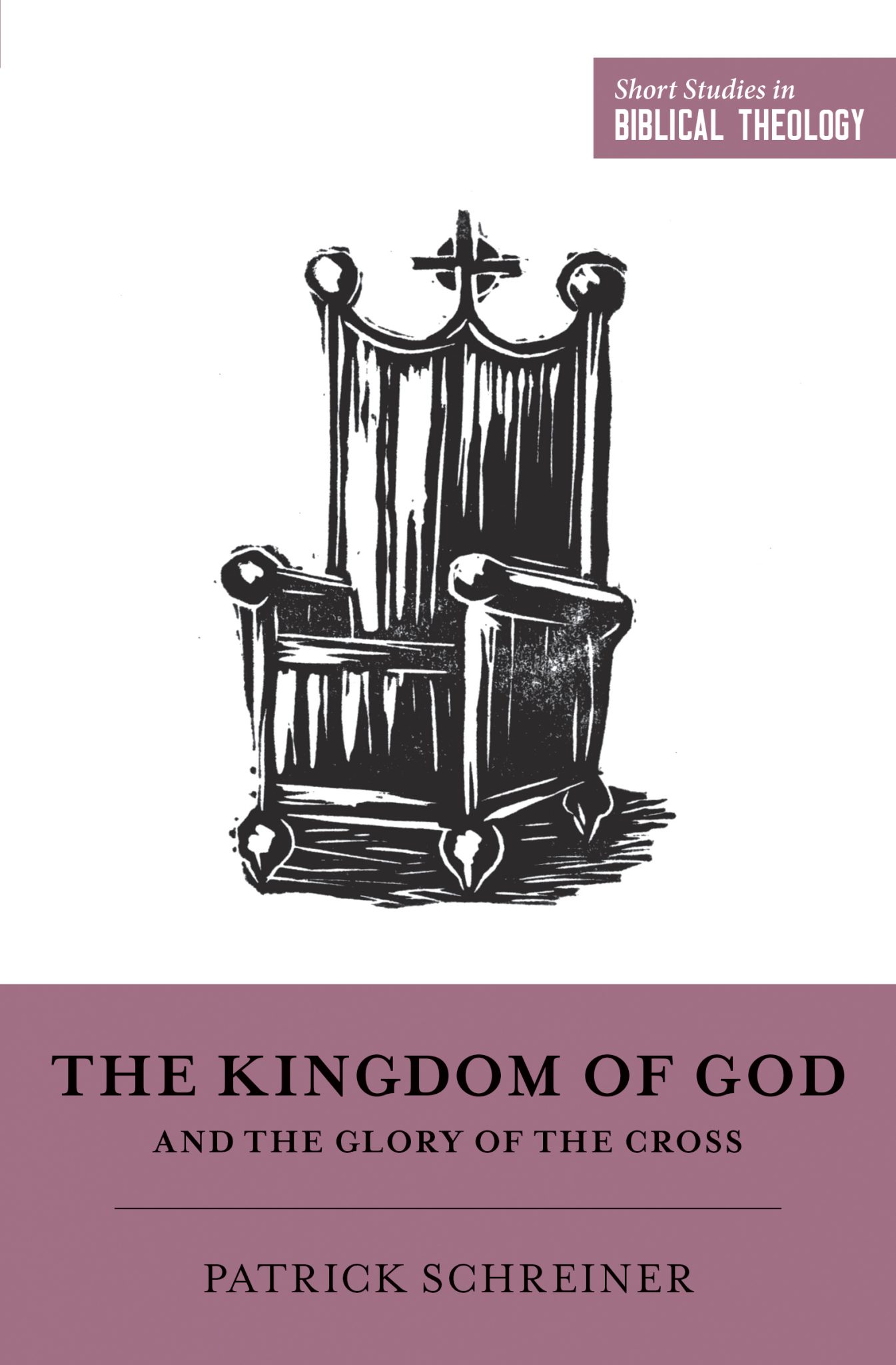 The Kingdom of God and the Glory of the Cross

The Kingdom of God and the Glory of the Cross

Defining kingdom as the King’s power over the King’s people in the King’s place, Patrick Schreiner investigates the key events, prophecies, and passages of Scripture that highlight the important theme of kingdom across the storyline of the Bible—helping readers see how the mission of Jesus and the coming of the kingdom fit together.

In answer to his old college question “What is the kingdom of God?” Schreiner’s response is two-pronged: a holistic definition and a recurring illustration.

First, the holistic definition: “The kingdom is the King’s power over the King’s people in the King’s place” (18). Those familiar with Graeme Goldsworthy’s writings (such as Gospel and Kingdom) will immediately recognize this definition, as well as Schreiner’s tweaking of it. This threefold cord of power, people, and place provides an antidote to reductionistic definitions that focus on only one aspect of the kingdom (18).

For example, many evangelicals (following George Ladd) focus on the kingdom as rule rather than realm, or in Schreiner’s language, power rather than place (15). This focus is helpful insofar as it highlights the fact that God’s people in the New Testament don’t possess a piece of real estate like the land of Canaan. But it can overlook the fact that “a king without a territory is an enigma” (19). We may not possess Canaan, but through our King we’re heirs to a pretty nice chunk of real estate—namely, the whole world (Rom. 4:13; 1 Cor. 3:21–22; Matt. 5:5). The kingdom story begins with the creation of heaven and earth and ends with its re-creation. The kingdom can’t be totally de-placed.

We may not possess Canaan, but through our King we’re heirs to a pretty nice chunk of real estate—namely, the whole world.

Neither can it be de-peopled. A king must have subjects. And while Schreiner doesn’t equate the kingdom with the church, he does come pretty close. The church is the “current manifestation of the kingdom” (108). The church and the kingdom, though not identical, are closely related. No sooner does Jesus speak of building his church than he speaks of giving it the keys of the kingdom (Matt. 16:18–19). And Paul is clear that the church consists of those who have been transferred into the kingdom of God’s beloved Son (Col. 1:13). We can’t talk about the kingdom meaningfully without talking about its citizens.

And of course, neither can the kingdom be de-powered. There can no kingdom without the presence of the King reigning in power. And at least for God’s people, this power is “not about coercion” but about “structures for flourishing” (19). The king exercises his power for his people’s good, so we can blossom and flourish like well-watered trees.

Speaking of which, Schreiner’s recurring illustration for the kingdom is a tree. Jesus directly compares the kingdom of heaven to a mustard seed that grows into a tree (Matt. 13:31–32). This parable evokes Nebuchadnezzar’s dream about a tree, which also symbolizes a kingdom, along with its power, people, and place (16; Dan. 4:10–12).

Moreover, Schreiner notes that the Bible “begins and ends with the figure of a tree,” namely, the tree of life (16; Gen. 2:9; Rev. 22:2). Isaiah 6 pictures Israel’s kingdom as a tree chopped down, with the Messiah King springing up out of the stump (16; Isa. 11:1). As noted above, those who submit to the King’s rule are also compared to flourishing trees (Psalm 1).

But of course, there’s one tree that towers above them all: the tree where Christ bore our sins in his body (1 Pet. 2:24). This tree actually brings the kingdom about. Too often the kingdom and the cross have been separated. People who focus on the cross have sometimes neglected the kingdom (or employed reductionist definitions of it), while those who focus on kingdom often downplay the cross (or employ reductionist definitions of it). Schreiner would no doubt agree with D. A. Carson in saying, “Damn [such] false antitheses to hell.” Indeed, Schreiner observes:

The kingdom is not a higher or more important theme than the cross. The two realities are forever joined; separating them is an act of violence. If the kingdom is the goal, then the cross is the means. (136, emphasis his)

As with the Passover, there can be no deliverance apart from “blood on the post”:

The Exodus and the Passover are the images that early Christian interpreters used to understand the cross. Jesus was enthroned on the cross, and it is only through the cross that the kingdom comes. If there had been no blood on the tree, there would be no kingdom. (139, emphasis his)

Given that many scholars (Schreiner included) believe kingdom to be the central theme of Scripture, one might marvel that it took the series so long to get here. But I’m glad it did. And though many scholars could’ve done it well, I’m glad they tapped Patrick Schreiner.

Of all the short books I’ve read on the kingdom of God until now, the one I’ve preferred for discipling purposes has been Vaughn Roberts’s God’s Big Picture. The Kingdom of God has enough unique advantages, however, that I would now be prepared to use the two volumes as complementary companions. They’re both brief, after all.

I can do no better than to end this review the way Schreiner ends the book:

The kingdom is not simply social ethics, or heaven, or the church, or God’s sovereignty; the kingdom is much larger. Only when we connect the dots from the first page of the Bible to the last do we begin to see that on every page the kingdom concerns the King, his people, and their place. And at the center of this kingdom plan stands a wooden cross covered in blood. (143)