I’ve never been much of a city boy. Growing up 15 miles from the nearest Walmart and driving a tractor by age 12, my life song could easily have been John Denver’s “Thank God I’m a Country Boy.”

But if T. Desmond Alexander is right, then I’m going to have to make some adjustments. Because according to his new book, the city is precisely where I and all of God’s people are headed. Not a city filled with crime or smog or traffic jams, but a city that has foundations, whose designer and builder is God (Heb. 11:10).

The City of God and the Goal of Creation marks the fifth release in Crossway’s Short Studies in Biblical Theology series, edited by Dane Ortlund and Miles Van Pelt. Alexander teaches biblical studies at Union Theological College in Belfast, Northern Ireland, and is the author of many books on biblical theology, including The Servant King and From Eden to the New Jerusalem.

I recall hearing Keith Mathieson say that of all the theologians living today, he thought Alexander is one of the best writers. I agree. Having read some of Alexander’s previous books, as well as all the previous entries in this series, I came to City with high hopes. On the whole I wasn’t disappointed.

The book is divided into an introduction followed by eight chapters. The chapters generally follow the storyline of Scripture chronologically, although chapters 2–4 are more thematic, discussing Jerusalem as the temple city, the holy mountain city, and the royal city, respectively. There’s too much to cover in a short review, so let me focus on a couple of highlights.

From Garden to Garden City

It should almost go without saying that a book on biblical theology would feel sweeping in its scope. After all, biblical theology, by definition, traces its theme across the entire canon. Perhaps City felt more sweeping than previous entries because I was unaware of just how pervasive this theme is in Scripture.

Or to say it better, I was familiar with a lot of the points he makes about Genesis 1–2, but I’ve been more accustomed to hearing them under the temple theme. Now I suspect that “Temple” will eventually get its own volume in this series. But already, Alexander has provided a helpful summary of G. K. Beale’s work on Eden as a temple (18–19). More importantly, he helps us see how the themes of temple and city are closely connected from the beginning.

Yes, Adam is commissioned to “work and keep” the garden, language similar to that of the priest’s work in the temple (18, Num. 3:7–8; 8:26; 18:5–6). But this garden-temple isn’t just something Adam is called to preserve; it’s something he’s called to expand. And the command to “be fruitful and multiply and fill the earth” (Gen. 1:28) points toward the creation of a city. After all, the distinguishing mark of a city is its great population. Alexander comments:

In the beginning the garden of Eden has only two human residents and is clearly not a city. But as the human population increases through time, Eden has the potential to become a great metropolis. . . . In Genesis 1–2 the impression is conveyed that the boundaries of the garden will expand outward as the human population increases. This emphasis upon filling the earth points toward a large population, appropriate for a city. (20, 21)

Given that Eden seems to have been a place where God dwelt with man (Gen. 3:8), this further suggests that God’s original goal was to dwell with his people in a holy city. Hence the title of the book, The City of God and the Goal of Creation.

If you think Alexander might be reading too much into Genesis 1–2, consider a couple of points.

First, when the goal of creation is finally reached, this is how it’s described. This is how the Bible ends—with God dwelling with his innumerable people in a holy city described in Edenic terms (see Rev. 21–22; esp. Rev. 22:1–3). The fact that the first Adam failed to accomplish that goal doesn’t mean it wasn’t the goal. Indeed, looking back, “the garden of Eden represents the first stage toward the creation of New Jerusalem” (20).

Second, when Hebrews 11:10 describes what Abraham was looking forward to, this is how it’s described. Unlike you and me, Abraham had never read Revelation 21–22—or Hebrews 11:10. So why was he looking forward to a city? Could it be because he was familiar with the contents of Genesis 1–2? Could it be that he interpreted God’s promise to give him innumerable descendants as a fulfillment of the original goal (Gen. 1:28; 15:5), and that (like Alexander) Abraham inferred the idea of a city from the promise of numerous descendants filling the earth? (cf. Gen. 12:3). 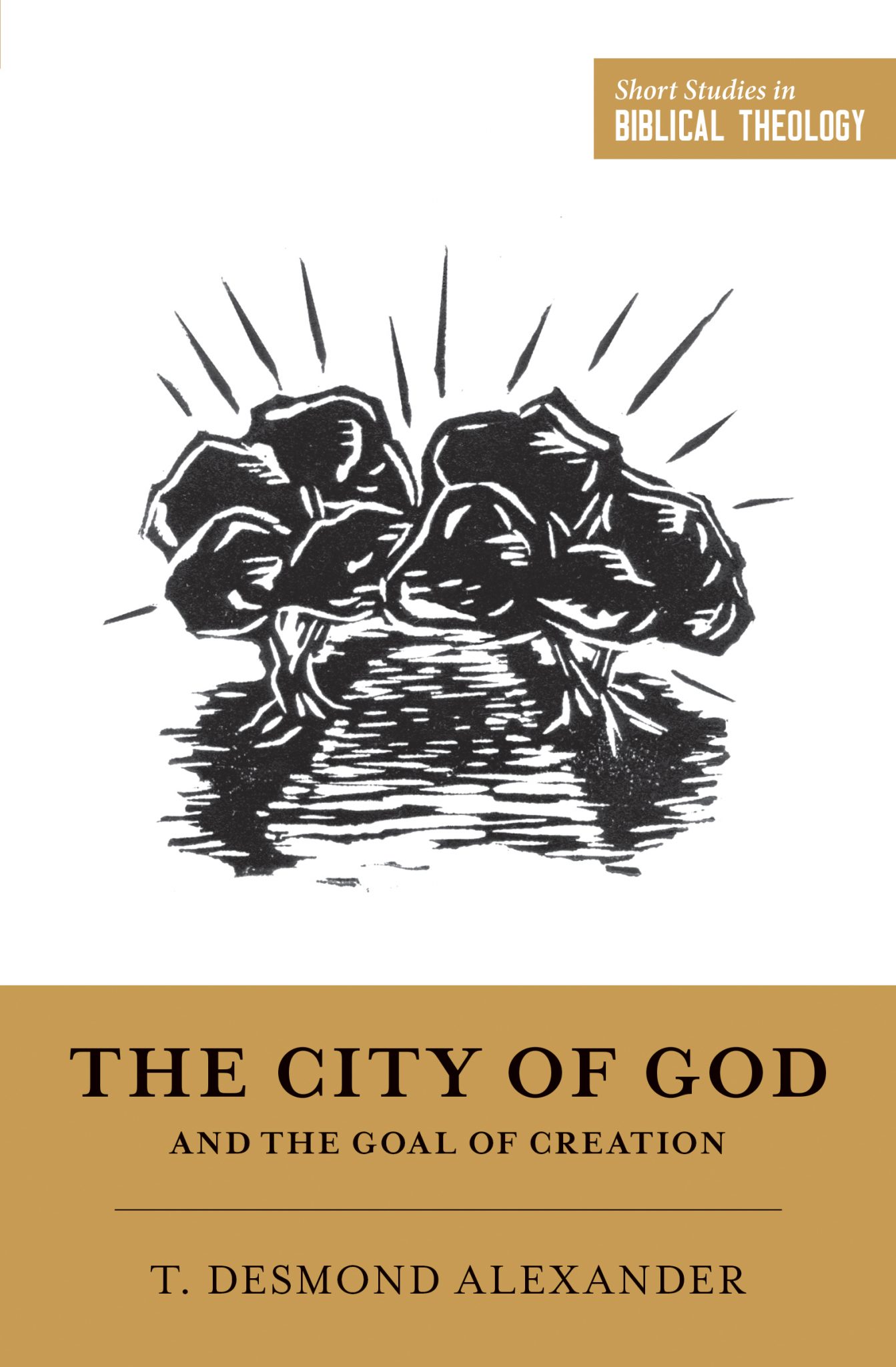 The City of God and the Goal of Creation

The City of God and the Goal of Creation

At the heart of God’s plan for the world stands an extraordinary city. Beginning with the garden of Eden in Genesis and ending with the New Jerusalem in Revelation, the biblical story reveals how God has been working throughout history to establish a city filled with his glorious presence.

Tracing the development of the theme of city in both testaments, T. Desmond Alexander draws on his experience as a biblical scholar to show us God’s purpose throughout Scripture to dwell with his redeemed people in a future extraordinary city on a transformed earth.

One of the chief benefits of good biblical theology like Alexander’s is that it helps you interpret the Bible more like the biblical characters themselves did (at least the godly ones).

At any rate, I can’t think of a better explanation. So before accusing Alexander of having an overly fertile imagination, let’s first ask whether ours is as fertile as Abraham’s. To my mind, one of the chief benefits of good biblical theology like Alexander’s is that it helps you interpret the Bible more like the biblical characters themselves did (at least the godly ones). In fact, James Hamilton would argue that’s what biblical theology is: “the attempt to understand and embrace the interpretive perspective of the biblical authors.”

It seems the more you do that, the more you will see temples and kings and cities where you never saw them before.

From Babylon to Jerusalem

Certain translation choices can disappoint when it comes to making biblical theological connections. Case in point: the introduction of Babylon as the quintessential “godless city” is obscured by the fact that at some point someone chose to translate the Hebrew word as “Babel” in Genesis 10:10 and 11:9. “[This is] an anomaly,” Alexander writes. “Babel should be called Babylon” like it is everywhere else (26).

Throughout Scripture, Babylon is symbolic of the people who are rebellious against God and violent against his people. We see it in the Prophets—it’s Babylon that destroys God’s city and temple and carries away God’s people into captivity. We see it especially in Revelation, where she’s finally destroyed after being drunk with the blood of the saints (Revelation 17–18). Noting the true identity of “Babel,” we can now see that this antagonism has its origins all the way back in Genesis (Genesis 10–11 is simply an urban-level outworking of Gen. 3:15 and 4:2–8).

What more can I say? For the time would fail me to speak of Alexander’s treatment of the church as spiritual Zion and citizens of a heavenly city (143–149). Or his fascinating discussion of how the three holiness zones of the tabernacle mirrored those of Mt. Sinai, making it a kind of portable Sinai journeying with God’s people until it finally came to rest on another mountain, Mt. Zion (50–54). Seriously, you should read it.

My only real gripe with the book is that it’s simply too long. At 192 pages, City is 33 percent longer than any other book in the series and threatens to burst the parameters of the “Short Studies” concept. Hopefully future volumes will be reined back in, and this will turn out to be an anomaly (like “Babel” in Genesis 11). In my judgment, the length stemmed largely from too many long quotes from too many scholars.

But this is a small matter. Alexander is a model theologian and a superb writer. Overall, I think I made more new theological connections reading this book than any other in the series so far. Most importantly, thanks to this book, my hope now looks a little more like Abraham’s: the city of God, New Jerusalem, coming down out of heaven from God. And that’s something even a country boy like me can look forward to.

Justin Dillehay (MDiv, The Southern Baptist Theological Seminary) is a pastor of Grace Baptist Church in Hartsville, Tennessee, where he resides with his wife, Tilly, and his children, Norah, Agnes, and Henry. He is a contributing editor of The Gospel Coalition.