Robert Putnam’s Our Kids has made a big splash. It’s prompted discussion and debate on all the biggest editorial pages and across the web. The content of the book is less important to these discussions than the symbolic importance of the fact that one of the major intellectual heroes of the American Left is arguing that the breakdown of the family destroys the poor. I wish I could write two reviews: one of Our Kids the book—the actual words printed on the pages—and another of Our Kids the public phenomenon. The latter is much better than the former.

The book is subtitled The American Dream in Crisis. This may cause misunderstanding for evangelicals, who these days tend to use the phrase “American dream” with contempt, associating it with selfish materialism. For Putnam, however—as for most Americans, according to surveys—the phrase “American dream” has nothing to do with wealth and materialism. It means we all have an equal opportunity, regardless of birth or station, to get a solid education and make a decent living for ourselves. Putnam writes:

My hometown was, in the 1950s, a passable embodiment of the American dream, a place that offered decent opportunity for all the kids in town, whatever their background. A half century later, however, life in Port Clinton, Ohio, is a split-screen American nightmare, a community in which kids from the wrong side of the tracks that bisect the town can barely imagine the future that awaits the kids from the right side of the tracks. (1)

If we care at all about the poor, the American dream is something we ought to be working to preserve.

Putnam argues that the American dream is in crisis because the breakdown of social structure in the lives of the poor denies them equal opportunity. People simply cannot get ahead—cannot make for themselves that humble but sufficient life of quiet dignity and provision called the American dream—in isolation. Where marriages fall apart, or are never formed in the first place; where parents don’t know the wisest ways to raise their children, because it’s never been taught or modeled in their experience; where schools fail to equip students for life; and where the bonds of local community are weak; the rich will thrive but the poor will have no opportunity.

A professor of public policy at Harvard University, Putnam is a scholar, and the book provides an abbreviated review of relevant scholarly data. But most of the book is storytelling. He gives us stories of people who, in the 1950s, had the opportunity to rise from poverty as a result of strong family and community bonds; and of those who, today, have no meaningful opportunity to rise because these bonds are lacking. Readers who want powerful stories will find Our Kids a banquet; other readers (like myself) who want to see more data showing Putnam’s stories are truly representative are fed, but not feasted.

The enormous attention Putnam’s book has received provides confirmation that the core institutions of American culture are belatedly awakening to the fact that the poor are being destroyed by the breakdown of relationships and interpersonal connections, especially in the family and workplace. It was an equally good sign that Charles Murray’s 2012 book Coming Apart got a similar level of attention. Our Kids seeks to do for the American Left what Coming Apart did for the American Right—use powerful illustrations and rigorous data to force people to pay attention to these problems. 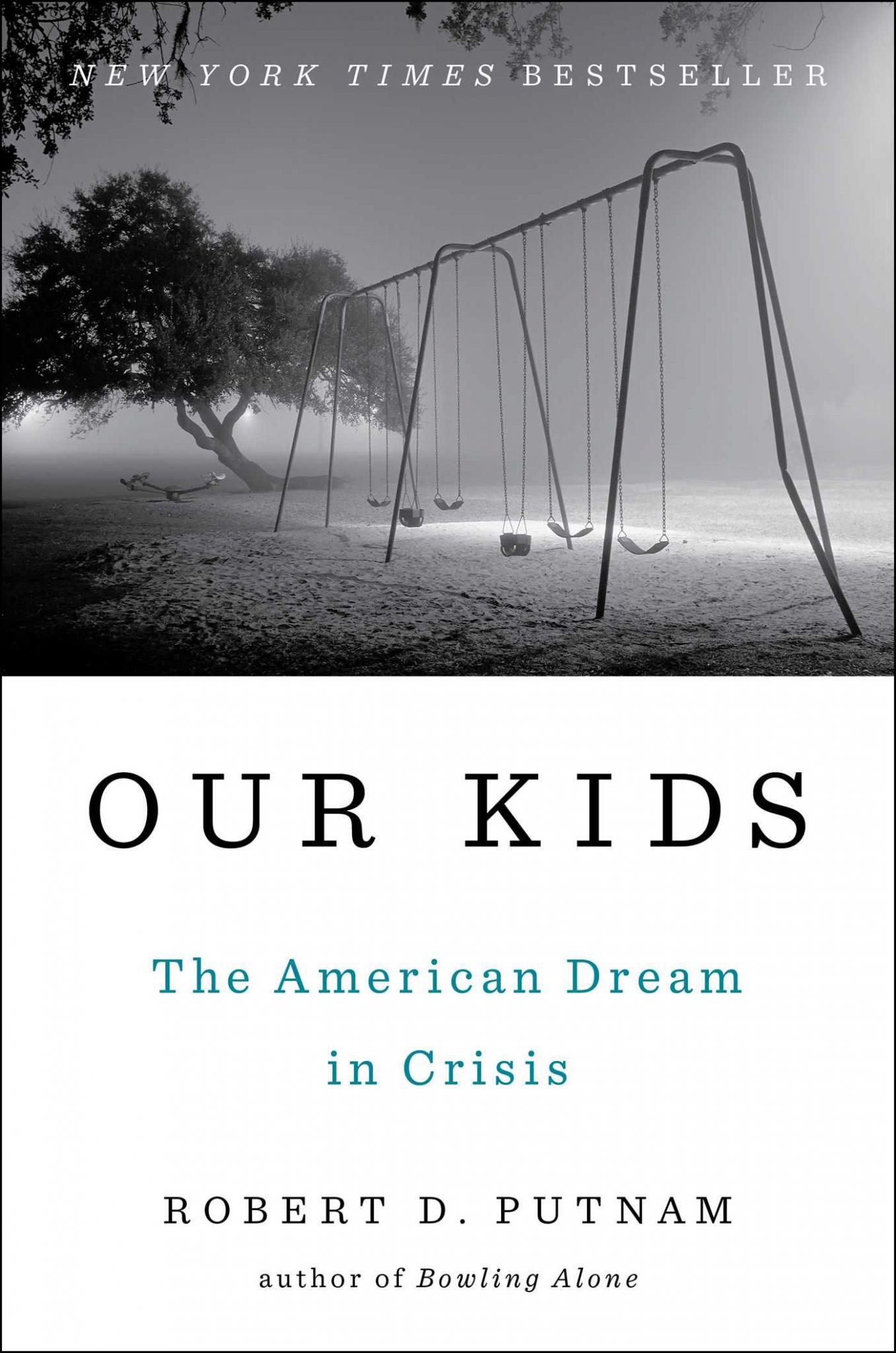 Our Kids: The American Dream in Crisis

Our Kids: The American Dream in Crisis

In Putnam’s world, the poor have little agency in their own lives. Everything really important about us is determined by huge, impersonal economic forces beyond our control. When families break down, when people disengage from community, when crime goes up, this has nothing at all to do with people failing to control their selfish desires; it’s solely and exclusively because of things like economic downturns and outsourcing. (I noticed several places where Putnam’s own data call this assumption into question.)

Putnam is right when he says we should reach out and go the extra mile to make sure the poor have opportunity. But he’s wrong when he says that calling on the poor to strive for virtue and self-control is useless and can even be counterproductive. Historically, the people who really broke down barriers and helped the poor to rise—from John Witherspoon and John Wesley to Martin Luther King Jr. and HOPE International—have taken exactly the opposite approach.

Putnam’s economic determinism even leads him to minimize the importance of racial injustice. I appreciate Putnam’s desire to emphasize that economic factors are important—they are—but I was shocked by some passages in which he suggests that 1950s racism, while ugly, was really not all that big a barrier to the American dream for black people:

Sorry, no sale. Count me in with Cheryl, who tells Putnam: “Your then wasn’t my then, and your now isn’t even my now.” Cheryl and her brother were told in a history class on slavery that “black people don’t have souls.” When the brother raised a fuss about this comment, he was disciplined by the school.

Putnam’s list of solutions is full of magical thinking. Vocational education must be radically expanded, but without creating a two-tier education system; day care for children must be radically expanded, but without displacing the role of parents in children’s lives. He even urges us not to champion marriage. Instead we should hand out an endless river of condoms, and pour enormous amounts of money into the exact same welfare and educational programs that have failed consistently for 50 years. School choice is of course out of the question, even though Putnam’s own data show it works; no doubt this is because it increases the power of the family against the state.

Although Putnam emphasizes that family and community structures are more effective than government programs, because of his economic determinism virtually all his proposed solutions involve expanding government programs. The possibility that these programs are becoming a substitute for family and community structures, so expanding them will make the problem worse, is not raised—not even when (as with day care) it seems blindingly obvious. For Putnam, that thought would be unspeakable blasphemy.

Perhaps the most important piece of data is this: in a 34-page chapter on solutions, Our Kids devotes exactly one paragraph—and even for a paragraph it’s underdeveloped—to local churches. That’s actually an improvement; Murray’s Coming Apart didn’t mention the church as a solution at all, even though he identified the decline of churches and the loss of meaning in life as central to the problem. But in fact local churches are the only plausible solution. Only they can rebuild the bonds that tie us to one another, for only they know where those bonds come from, what they are for, and how they can be renewed.

Our Kids the public phenomenon is a good sign. The core institutions of our culture are taking an interest in the collapse of family and community among the poor. Our Kids the book shows how far they still are from even beginning to think in terms that might lead them to the right solution.