The five guests who attended the wedding in a small house didn’t know that it would shake the world.

On the evening of June 13, 1525 in Wittenburg, Katharina von Bora became Katharina Luther, wife of Martin Luther. That evening, the Protestant Reformation bore one of its sweetest—and most underappreciated—fruits: the transformation of marriage and family.

It was a seismic event precisely because it rescued marriage. 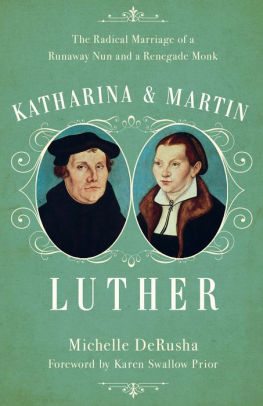 Katharina and Martin Luther: The Radical Marriage of a Runaway Nun and a Renegade Monk

Katharina and Martin Luther: The Radical Marriage of a Runaway Nun and a Renegade Monk

Marriage had fallen on hard times during the medieval age, particularly within Christendom. Advice given to Christian men ran along the lines of “Don’t marry; serve God.” The church had dug a profound fault line between the sacred and the secular.

As Michelle DeRusha shows in Katharina and Martin Luther: The Radical Marriage of a Runaway Nun and a Renegade Monk, it nearly didn’t happen. Luther wasn’t particularly drawn to Katie, and feared he’d soon be a martyr for the Reformation cause, thereby leaving behind a new wife. But “to spite the Pope and the Devil,” Luther wed Katie, entering “marriage as a school of character.”

Luther eventually fell in love with his bride, and they had six children together. The Luther home was, to say the least, lively—a joyful reality that DeRusha demonstrates well.

Luther’s story is well known. He was an Augustinian monk who challenged the Roman Catholic Church and papal authority by hammering 95 arguments to the Castle Church door in Wittenberg, an act that unleashed a tsunami within Christendom. He was the bold figure who stood before the imperial diet at Worms in 1521, refusing to recant his writings or stop defending the pure, biblical gospel.

He helped rebuild the church’s foundation—justification by faith. He boldly reasserted the authority of the Bible and gave Germany God’s Word in her vernacular. Luther was a brassy man, with staggering strengths and baffling weaknesses, but he was a gift to the church. DeRusha retells his story in lively prose.

But Katharina and Martin also tells a story that’s not as familiar to us—a thrilling tale of a nun who escaped from her convent under cloak of darkness to join the burgeoning Reformation in Wittenberg. DeRusha brings Katie Luther to life and paints her in stark hues, telling us about her daring escape from a convent life she never chose, her rigorous work in the home, her deep concern for Luther during his dangerous travels, and her tenacious battle to provide financially for the family following his death. DeRusha captures the drama of Katie’s marriage and day-to-day life.

Why is the Luthers’ marriage so important for Christians nearly 500 years later? For one, it transformed marriage in ways we take for granted. It also provides us with an important model for marriage and family. Here are three ways it has shaped our understanding:

1. Marriage done God’s way is a pathway to abundant joy. DeRusha characterizes the Luther home as one of intensity and frenetic work, balanced by raucous humor and abundant energy. Katharina and Martin were doting parents to their six children, and Martin was by no means an absentee father. In The Estate of Marriage, Luther spoke of changing diapers with customary wit: “God, with all his angels and creatures, is smiling—not because that father is washing diapers, but because he is doing so in Christian faith.”

In contemporary society, the first attraction between a man and woman is often physical, and the relationship is expected to germinate from there. That’s not necessarily wrong, but Martin and Katie didn’t begin that way. Luther failed to see physical beauty in his wife-to-be at first, but he married her anyway because of her godliness. Their marriage was built on a foundation of growth in holiness, though Luther did correct the church’s notion that sex within marriage is intended only for conception. Sex between husband and wife glorifies God when seen as a gift intended for pleasure.

Martin and Katie’s marriage illustrates God’s infinite wisdom in uniting one man to one woman for one lifetime.

2. The home is a little church and parenting is a holy vocation.

The Luthers didn’t think children were “best seen and not heard.” The household, as Luther expressed it, is to operate as “an earthly kingdom” where parents train children in the commandments of God. The fundamental purpose of marriage is to raise godly offspring. Wrote a single Luther in 1522:

The greatest good in married life, that which makes all suffering and labor worthwhile, is that God grants offspring and commands that they be brought up to worship and serve him.

As DeRusha shows, Luther believed the parent should be apostle, bishop, and priest to his children; he considered no nobler earthly authority than that of parents over children. He developed a robust vision for Christian training in the household, calling parents to disciple their children. The Puritans in England and America cultivated this vision and brought it to full flower in the form of consistent family worship and discipleship—but Martin and Katie sowed the seeds.

Many spiritual saplings were planted in the Luther home, but all were watered by a deep well of exuberance. DeRusha writes:

Luther and Katharina had fun with their kids and enjoyed spending time with them. They delighted in their children’s antics and their innocent comments and expressions. Love and joy were obviously abundant in the Luther household.

3. A faithful Proverbs 31 woman is not a passive, demurring wife.

DeRusha’s Katie is a full-throated woman of her times. Martin firmly believed in traditional complementary roles for men and women, of which his home was a fulsome model. Katharina was in every way a Proverbs 31 woman, tender as silk when husband and children needed encouragement and tough as rawhide when both got out of line.

Katharina was in every way a Proverbs 31 woman, tender as silk when husband and children needed encouragement and tough as rawhide when both got out of line.

Childbearing in the 16th century was a frightening enterprise—children died in infancy as often as they lived to adulthood, and delivering mothers suffered terribly and frequently died. Yet Katie gave birth to six children without any extraordinary challenges. She planted and harvested a large garden annually, and tended and even butchered the family’s livestock. And she helped Martin walk the line, matching him quip-for-quip. No doubt Luther wasn’t an easy man to live with, but Katie was more than up to the task. As DeRusha notes, a 1530s painting of the Luther family speaks volumes about the arrangements at home and beyond:

Katharina is not depicted in the background, sewing or knitting, but is seated front and center in the foreground. And while her maternal qualities are highlighted, with one child on her lap and another standing nearby, she also appears to be discussing or perhaps even arguing a point with her husband. Katharina is speaking, and Luther is listening. . . . Katharina was not a mere bystander; she was an engaged and devoted partner to Luther and an active participant in the Reformation.

As with all good marriages, the Luthers’ was filled with both difficulties and delights. They buried two daughters—Elizabeth at eight months and Magdalena at 13. Katie was often anxiety-ridden thinking the Reformation’s enemies might eliminate her husband. Along with their six children, their home was perennially filled with guests, from Martin’s students to famous friends such as Philip Melanchthon.

Katie finally bade her love goodbye on February 18, 1546. Perhaps Luther’s wry but earnest affirmation of marriage fitly summarizes what this particular union did for the institution in general:

Ah, dear God, marriage is not a thing of nature but a gift of God—the sweetest, the dearest, and the purest life above all celibacy and singleness, when it turns out well, though the very devil if it does not. . . . If then these three remain—fidelity and faith, children and progeny, and the sacrament—it is to be considered to be a wholly divine and blessed estate. . . . One should not regard any estate as better in the sight of God than the estate of marriage.

I’m a pastor. And thanks largely to the Luthers and the reformation of marriage, I’m a husband and a father. I’m grateful for the profound gift of this theology, brought out of eclipse 500 years ago.