The argument of the book is, for this reviewer, a huge breath of fresh air. Westerholm, professor of early Christianity at McMaster University in Ontario, actually believes that for Paul, the greatest dilemma is human sin, the greatest need is divine grace, and the great solution is the substitutionary work of Christ. Other concerns, such as ethnic inclusiveness, do not determine what justification means, but where justification necessarily takes us by way of implication.

Who is this book for? Those who have kept up on the debates swirling around Pauline justification (and connected discussions such as the New Perspective, Apocalyptic in Paul, the “law” and “works of the law,” the nature of Paul’s break with Judaism, and so on) will not find their thinking greatly advanced by Westerholm’s small book (nor is this the book’s intent). They will rather find useful summaries of, and brief interactions with, the major players in these discussions. The greatest use of this book will be to orient students and pastors to the justification debates. This work will prepare such readers for more extensive engagement with the literature, providing a sure-footed frame of reference on the front end of such engagement.

Westerholm lays the book out in a clear and helpful way. Each chapter addresses a distinct debated issue relating to justification in Paul, in each case interacting (and disagreeing) with a key player in the debates. Chapter 1 interacts with Krister Stendahl’s thesis that we modern Westerners import into our reading of Paul a concern of Luther’s more than Paul’s—namely, how can sinners find a gracious God? Rather, Stendahl argued, including Gentiles into the people of God is more fundamental to Paul. Westerholm works quickly through Paul’s undisputed letters in chronological order to show that if Stendahl is right, much of what Paul says makes little sense, for Paul says much more about sin and salvation than Gentile inclusion. 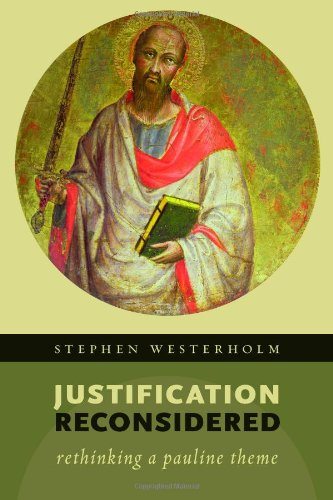 Chapter 2 addresses E. P. Sanders to show not only that Second Temple Judaism was not as “grace”-oriented as Sanders sought to show, but also that Paul and the Judaism of his day were most emphatically not of one mind about grace and election. Paul’s doctrine of justification radically depended on sheer divine grace in a way the Jewish literature fails to bear out.

Chapter 3 engages Heikki Räisänen and specifically his dismal conclusion that Paul was simply incoherent when it comes to justification (sometimes speaking of justification as wholly gratuitous, other times as dependent on lawkeeping). The two must be mutually exclusive, so no need to try to synthesize. In a refreshing move, Westerholm dares to call in a trio of titanic theologians generally ignored by New Testament scholars for supposedly insufficient awareness of early Judaism and the ethnic realities with which Paul was dealing. Summoning Augustine, Luther, and Calvin, Westerholm shows, to the contrary, that the failure to penetrate deeply into Paul’s thought is Räisänen’s, not theirs.

Chapter 4 reflects on N. T. Wright’s vision of justification as outlined in his 2009 Justification: God’s Plan and Paul’s Vision. Westerholm zeroes in on Wright’s argument that “righteousness” refers to that which is in accord with the covenant with Israel (and does not speak of a moral quality). Reflecting on the Old Testament and Paul, Westerholm suggests that to be “justified” is simply the appropriate legal adjudication of one who is indeed in the right. This is “ordinary righteousness.” What is extraordinary in Pauline justification is that God justifies the ungodly, those who are not in fact in the right—which God can justly do on account of Christ’s expiatory work (why Westerholm shies away from the language of propitiation in explaining Romans 3:24–25 is not made clear).

Chapter 5 interacts with the “law” and “the works of the law” by which no one can be justified, engaging James Dunn. Dunn is well-known for arguing that these “works of the law” in texts such as Galatians 2:16 are—exclusively, according to his earlier works; mainly, according to his later works—those works that set Jews off from Gentiles (in particular, Sabbath keeping, food laws, and circumcision). Westerholm argues Paul is concerned not with the law’s exclusivity but with its inability to deliver righteousness.

Chapter 6, finally, discusses Campbell’s idiosyncratic campaign against “Justification Theory” in which a God who is coldly just is traded in for a God who is warmly benevolent. Westerholm points out that we are given every reason in Paul’s letters to conclude that God is both just and good; the two ought not to be played off against one another.

For those familiar with the literature, these chapters will generally be review. But the freshness with which Westerholm writes is so striking that it must be lingered over for a moment. Each chapter delightfully draws the reader in, whether Westerholm is reflecting on his days in Sweden in the 1970s (ch. 2), poking fun at himself (ch. 4), or telling a joke about a Catholic, a Baptist, and a Lutheran (ch. 5).

More importantly, Justification Reconsidered is truly written not to impress but to help. Westerholm resists any temptation to latch on to academically slick trends in Paul circles. He knows what’s at stake. We are all sinners in need of saving. And while justification is only one way among many that Paul uses to speak of salvation (as Westerholm repeatedly reminds us), it is the descriptor that most clearly speaks of the utter gratuity of salvation. God justifies ungodly sinners. Christ died and rose again to achieve this work. Faith receives it. Gentile inclusion is an important practical outworking, but only an outworking, of Paul’s doctrine of justification.

Few and far between are the disappointments of this book. One minor frustration is Westerholm’s use only of the critically accepted seven Pauline epistles (though note p. 27 n. 5). His method here allows him to square off with other scholars on their own ground. But it also allows for certain weaknesses: for example, Westerholm should agree, not disagree, with Wright’s suggestion that Christ’s resurrection was his justification (p. 70 n. 14), and including 1 Timothy (3:16) may have encouraged such agreement (though Romans 4:25 should perhaps be enough).

Justification Reconsidered could also have been strengthened by a chapter on union with Christ and its relationship to justification. The interlocutor for this chapter could have been either Michael Gorman or the Finnish take on justification (relying heavily on a new reading of Luther), in which justification is not purely forensic but transformative and even approaches a form of deification.

The main area in which I wish Westerholm would fill out his interpretation of Paul is the question of why the law cannot justify. As in his other writings, Westerholm speaks of human incapacity to fulfill the law. He reiterates the important point that Paul’s anthropology diverged from that of the Judaism in which he was immersed: the Jewish literature generally works with an optimistic outlook on moral human capacity, versus the pessimistic outlook of the apostle. This is well and good, and instructive. Yet Westerholm denies that Jews sought to keep the law legalistically (that is, with a view toward earning divine approbation by human effort). I wish, as much German New Testament scholarship has articulated, that Westerholm had presented a both/and here.

To be sure, some of the older caricatures of early Judaism must go. And I don’t mean to make the horridly anti-Semitic argument that Jews were more legalistically oriented than others. Rather, Jews are humans. And humans are hard-wired to seek to comply with a moral code (whether the law of Moses, or anything else) “as if it were based on works” (Rom. 9:32). In Paul’s vaunted resume in Philippians 3, it is not disobedience but a certain kind of obedience that led him astray and which he counted as rubbish after being given Christ. A brief introduction to Paul that takes into account his combatting of legalism is Peter Stuhlmacher’s Revisiting Paul’s Doctrine of Justification: A Challenge to the New Perspective (2001).

But if I have to pick one and only one orientation to Pauline justification and the current debates, Justification Reconsidered is certainly it. Clarity, sound reasoning, and fairness mark the work. On top of that, it is simply enjoyable to read. And if you can find a New Testament scholar engaging the New Perspective and other contemporary views who is unafraid to call in Augustine, Luther, and Calvin, take note. Such interdisciplinary scholarship brings fullness and depth, and heads off what may otherwise be tempting perspectives. We are neither the first nor the smartest to ask what drove the apostle Paul.

Dane C. Ortlund serves as senior pastor of Naperville Presbyterian Church in Naperville, Illinois. He earned a PhD from Wheaton College and is an editor for the Knowing the Bible series and the Short Studies in Biblical Theology series. He is the author of several books, including Gentle and Lowly: The Heart of Christ for Sinners and Sufferers. He lives with his wife, Stacey, and their five children in Naperville, Illinois.