Christians know our world has changed, but we’re surprised by how rapidly much of the world has become hostile for Christians. I write from Australia. A couple of months ago, every single media outlet was devoted to the story of Israel Folau, a previously popular professional rugby player, who is public about his Christian faith. Folau was asked on Twitter for his view on “God’s plan” for gay people. Folau tweeted, “Hell. Unless they repent of their sins and turn to God.”

The public outcry was huge. Overnight, Folau became public enemy number one. Rugby Australia has threatened not to renew Folau’s contract at the end of the year. At rugby games, whenever Folau gets the ball, the crowd now boos.

This incident reinforces the fact that we now live in different worlds. Many of my Christian friends see Folau as a champion of free speech standing up for his religious convictions. They hope that if Folau’s contract isn’t renewed, the tide of public opinion will turn against secularism and see it for what it is—a bully that imposes its worldview on others.

My non-Christian friends have a completely different perspective. They see Folau as the monster, the bully. And they gladly boo him at each and every opportunity. Nothing would please them more than if Folau’s contract isn’t renewed.

It’s hard to imagine a time in recent Western history when Christian and non-Christian worldviews have been so separate. We stand on two different mountaintops and have two completely different ways of viewing the same reality. So how can we bridge these worldviews? How can a Christian utter a word in public without being branded a monster?

This is why Abdu Murray’s Saving Truth: Finding Meaning and Clarity in a Post-Truth World is a timely book for Christians struggling to find an apologetic compass to navigate our 21st-century, post-Christian, Western world. Murray—the North American director of Ravi Zacharias International Ministries—does three things in this book: diagnose the problem, promote the solution, and address obstacles. 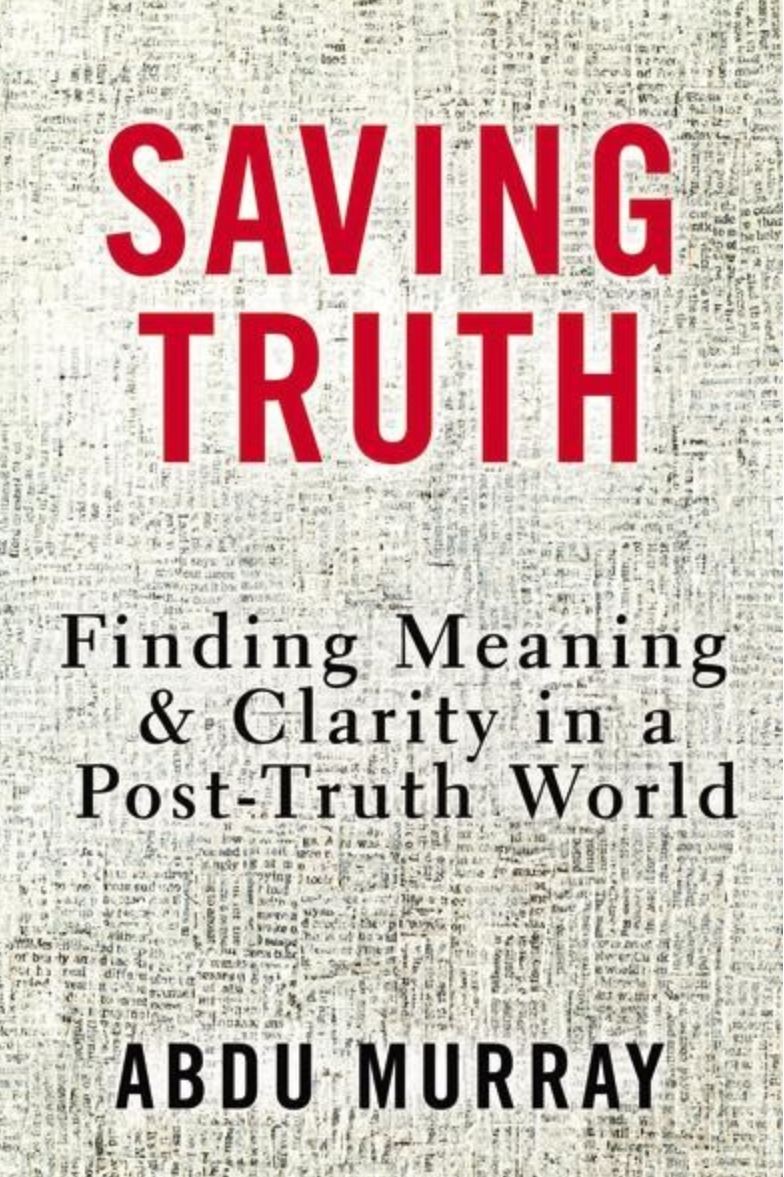 Saving Truth: Finding Meaning and Clarity in a Post-Truth World

Saving Truth: Finding Meaning and Clarity in a Post-Truth World

Saving Truth provides arguments from a Christian perspective for the foundations of truth and how those foundations apply to sexuality, identity, morality, and spirituality. For those enmeshed in the culture of confusion, the book offers a way to untangle oneself and find hope in the clarity that Christ offers.

First, in chapters 1–3, Murray diagnoses what exactly has happened in the last few decades. We live in a post-truth world, in what he calls the “culture of confusion.” We elevate individual preferences over truth. We also elevate individual autonomy (freedom from constraints) over true freedom (freedom within constraints). Whereas autonomy is the freedom to make any choice, according to preference, true freedom is making the right choice, according to truth.

The post-truth, public outcry is about preferences, not truth.

I found many aha moments here. For example, this explains Folau’s tweet. Folau was trying to answer according to what he thought was the truth. He could only answer within the constraints of biblical truth (though perhaps he could’ve been more tactful and less abrupt). But his public audience misunderstood Folau as saying he would prefer that gays go to hell, and thus saw him as a monster. Folau didn’t respect the publicly accepted preferred view.

Murray has nailed it. The post-truth, public outcry is about preferences, not truth.

I love what Murray does here. It’s similar to James K. A. Smith’s book How (Not) to be Secular. Smith argues that our secular friends are living in an immanent frame, but they illegitimately borrow from the transcendent. As my own book proposes, if we can demonstrate this to our friends, then we can get them wanting and wishing for the Christian God to be true.

I also believe it’s similar to what Paul does in Athens in Acts 17. Paul shows his audience, from their cultural texts, what they’re really looking for. And then he shows them how they cannot find it on their own terms. But they can find it if, and only if, they come to the God of the Bible.

Third, Murray addresses contemporary defeater beliefs. For example, in chapters 6–8, Murray talks about issues of sex, gender, identity, science, and religious pluralism. Again, I like what Murray does here. His posture is largely positive. He promotes Jesus as offering a better way of understanding human sexuality and identity, the transcendence of the universe, and the ultimate way to God.

Christian apologetics can learn much from this approach. This is similar to what Glynn Harrison does in his book A Better Story: God, Sex and Human Flourishing [read TGC’s review]. It’s not enough for us to only give answers to our friends’ questions; we also need to promote a better, more enticing way of understanding ourselves and the world. Or, as I sometimes put it, we must demonstrate to our friends that the gospel is more imaginable and more beautiful than they realized.

We must demonstrate to our friends that the gospel is more imaginable and more beautiful than they realized.

I believe we can gain much from Saving Truth. Interestingly, I’m on a committee that is trying to organize an apologetics conference, and we came up with exactly the same issues raised by Murray’s book. In other words, Murray has accurately exegeted our Western society and knows what needs to be addressed. We can learn from how he responds to these issues.

My few concerns are minor. By and large, the tone of the book is friendly and empathetic to the non-Christian worldview, and for this reason I could happily give it to my non-Christian friends to read. But every now and then, I thought some of the phrasings were unnecessarily pejorative. For example, “shackled to medications” (76). And I know that those who know a thing or two about mental illness will frown on the misuse of the term “schizophrenia” (56)—which, medically, does not mean split personality, but is unfortunately often misused this way.

Overall, Murray’s Saving Truth is a book I’d recommend to my Christian and non-Christian friends. We can all benefit from his insights and analysis.

Sam Chan (PhD, Trinity Evangelical Divinity School) is the lead mentor and trainer at EvQ School of Evangelism, a ministry of City Bible Forum. Based in Australia, he is the author of several books including, Evangelism in a Skeptical World and How to Talk About Jesus (Without Being That Guy. In these, Sam breakdowns how to share Jesus in both vocational ministry and every day settings. Speaking at conferences around the world on storytelling, apologetics and the practice of evangelism in a post-Christian culture, Sam also blogs at espressotheology.com.