I am safe. I am secure. And I am free as a Christian living in North America. So what should I do about my Christian brothers suffering daily around the world?

Obviously we should pray the persecution ceases, right? We should at least write our Member of Congress or Senator, correct? Shouldn’t we take up the cause, start a nonprofit, and raise some funds?

Not necessarily, says Nik Ripken, a leading expert on the persecuted church in Muslim contexts and missions veteran of 25 years. For The Insanity of God: A True Story of Faith Resurrected, Nik and his wife Ruth spent a dozen years interviewing more than 700 persecuted Christians. Most of those interviews were conducted among the persecuted in their homelands. According to Ripken’s data, the persecuted neither pray for nor expect persecution to cease. So why am I entreating God on behalf of the persecuted in a manner contrary to the way they pray for themselves?

Don’t Pray It Away

Ripken plainly states, “I have never encountered a mature believer living in persecution who asked us to pray that their persecution would cease.” Instead the focused prayer of the persecuted is “that they would be faithful and obedient through their persecution and suffering.”

As an American with dozens of Bibles collecting dust on my shelf, I struggle to fathom the pastor who owns only one book of the Bible. I’m talking about only Psalms or Leviticus—not both. Ripken recounts an event in which one Bible was carefully torn apart and distributed so that each pastor departed joyfully with his first and only portion of Scripture. By carefully retelling such experiences and capturing hundreds of interviews, Ripken destroyed my experiential knowledge of normal Christianity.

I lived and worked as a missionary among unreached people groups in dangerous, highly restricted nations. I spent a devastating six months negotiating the release of my American team members being held hostage. I know Ripken’s world, but only to a degree. 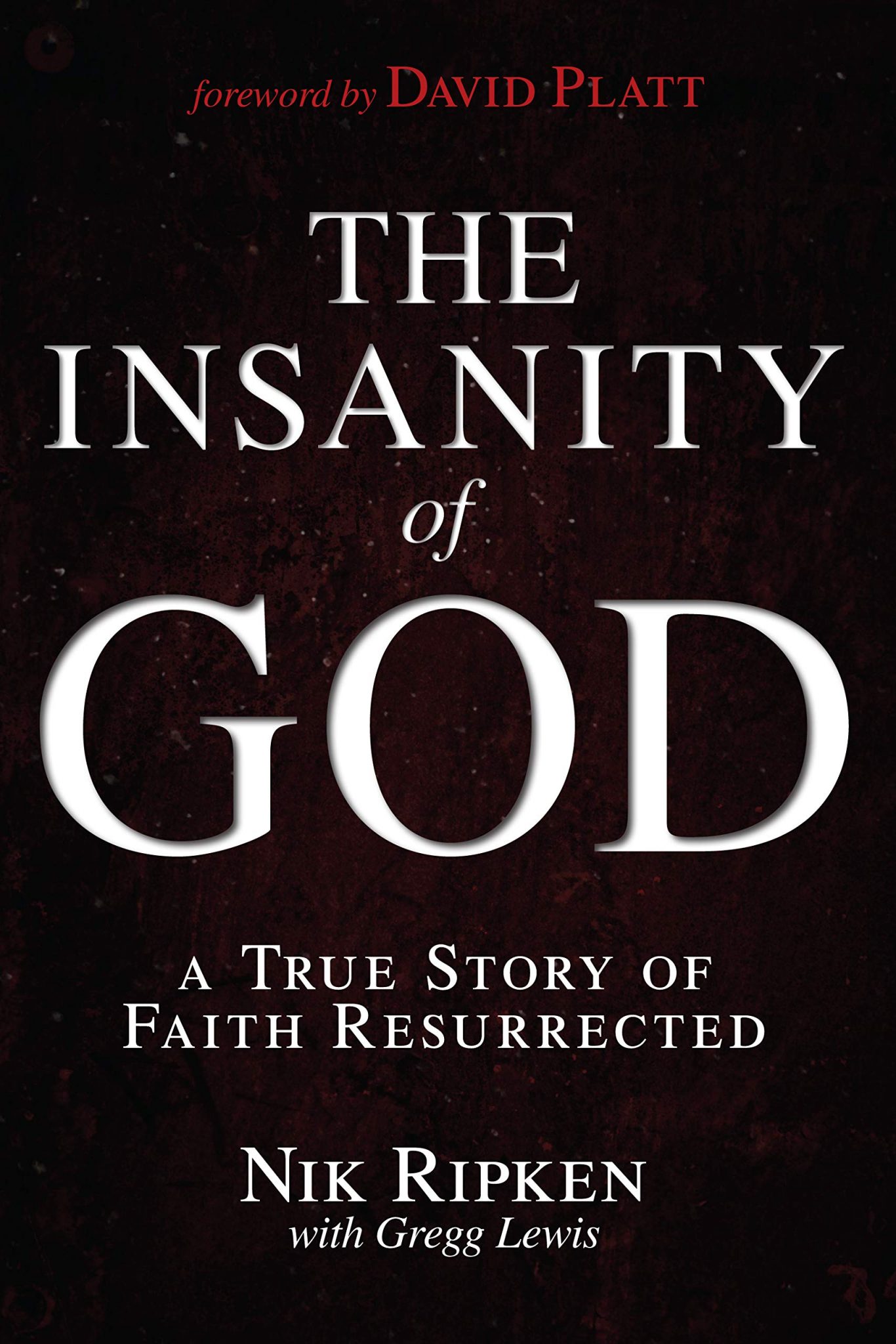 The Insanity of God: A True Story of Faith Resurrected

The Insanity of God: A True Story of Faith Resurrected

The Insanity of God tells a story—a remarkable and unique story to be sure, yet at heart a very human story—of the Ripkens’ spiritual and emotional odyssey. The gripping, narrative account of a personal pilgrimage into some of the toughest places on earth, combined with sobering and insightful stories of the remarkable people of faith Nik and Ruth encountered on their journeys, will serve as a powerful course of revelation, growth, and challenge for anyone who wants to know whether God truly is enough.

Even from my front-row perspective in the arena of persecution I cannot self-transmigrate into the psyche of a father gathering his wife and children just prior to his arrest. Ripken interviewed that pastor’s son, Stoyan, who described his dad’s final words: “If I am in prison and I hear that my wife and my children have been hung to death rather than deny Jesus, I will be the most proud man in that prison.”

But, we’re tempted to ask, what is the solution to erasing the persecution of Christians? Ripken writes, “If our goal is reducing persecution, that task is easily achieved. First, just leave Jesus alone. Second, if you do happen to find him, just keep him to yourself.”

Persecution of Believers Is Normal

Ripken demonstrates through hellacious experiences in Mogadishu and from interviews in 72 countries that persecution is both normal and expected—thus dubbing the book The Insanity of God.

I cringe at Ripken’s title as much as I despise the notion that persecution is normal. God is not insane, though one may perceive him as such. And persecution is not normal—at least not in my church, my city, or my nation.

It seems insane that God’s chosen, effective servants thrive under persecution. Yet numerous interviewees insisted, often with their fingers jabbing at Ripken’s chest, that there is no such thing as a lack of Christian freedom. There is never a lack of freedom to preach the gospel, regardless of statutory restrictions.

This Is Personal, Not Simply Hagiographic

The strength of The Insanity of God is that it is highly personal. Ripken normalizes the absurdity—even the insanity—of God’s ways. Unlike so many publications about Christian suffering, this book doesn’t press the reader to join a campaign or collect funds for a cause. Ripken demands much more.

The book’s great weakness is that, at least for now, the author dare not reveal many details of his 12-year sociological study. Without open access to the raw data, of course, scholars could discount the book with smirks and demands to see the records. I assume that to prove the data is to put lives at risk, even more so than occurred with the initial interviews. For what it’s worth, Ripken’s stories and interview accounts seem consistent with other isolated reports.

Ripken is a skillful, Kentuckian storyteller. He wraps the interviews around his own pilgrimage as a rural farm boy, turned Africa missionary, turned distraught aid worker in Mogadishu, turned witness to the murder of his congregation, turned mourning father who buried his young son on the mission field. Ripken is scarred from the hell of Somalia and the tragic loss of his son. His research and stories bleed of brokenness, and the book personifies his restoration from absolute and complete devastation.

I’m church planting in inner-city Memphis, where the senior pastor of our young church invites me to preach about once per month. As a white man, I struggle when our black congregation talks back to me. If my sermon connects, a sweet lady shouts, “So what, preacher?” I know her words are supposed to be emboldening and affirming, but I’m regularly left bumbling when she hollers anything at me mid-sermon. Likewise, Ripken leaves me inept to answer the haunting question.

If persecution is normal, then so what about my life?

Stoyan is one of those children who witnessed soldiers carting his father, a pastor, off to prison. Stoyan persisted with Jesus, even without a father. When Ripken interviewed this young minister, Stoyan’s penetrating words resonated through the book. “Don’t you ever give up in freedom what we would never give up in persecution.”