Throughout history his followers have believed the Bible, as a divinely given book, is fully trustworthy and contains no error. To use a more specific term, it’s inerrant. From there, much more can be said about the role of human writers, interpretive differences, philosophical and epistemelogical considerations, and present-day challenges.

So to help gain perspective and go deeper in this discussion, I corresponded with Don Carson, president of The Gospel Coalition. Carson—research professor of New Testament at Trinity Evangelical Divinity School outside Chicago—and a team of 37 contributors have published a massive new 1,256-page tome titled The Enduring Authority of the Christian Scriptures (Eerdmans).

In this interview we learn why “inerrancy” is still the best word to use today, when the battle over inerrancy becomes a distraction, how the doctrine should be a “place to live,” and more.

In one sentence, how would you define “inerrancy”?

The word “inerrancy” simply means without error; the doctrine of inerrancy is nothing more than the affirmation that the Bible always tells the truth.

If the word “inerrancy” requires so much careful definition and discussion, is it still the best word to use today?

(a) Inerrancy is not to be confused with precisionism. We expect more precise statements only where the context demands them. “It took him three hours to walk home” may be a true statement, even if it took him two and three-quarters hours, provided the context leads the reader to expect rounded-off figures.

(b) Inerrancy does not refer to grammatical irregularities. To think otherwise is to misunderstand how language works: usage drives change, and in every culture the degree of conformity between usage and a somewhat artificial grammar-book ideal varies with different strata.

The word ‘inerrancy’ simply means without error; the doctrine of inerrancy is nothing more than the affirmation that the Bible always tells the truth.

(c) The Bible includes countless passages where its “truthfulness” is not the controlling issue. Consider, for example, the anguished laments of Scripture—for example, Jesus’s anguished lament “My God, my God, why have you forsaken me?” It is true, of course, that Jesus said this, but as for the words themselves, the focus of interest is less on their truthfulness than on their meaning. By contrast, the assertion that Ehud was left-handed (Judges 3:15) makes a factual claim that is either true or untrue. This is one of the reasons why inerrancy is a useful expression. It is potentially misleading to say “all Scripture tells the truth” if we thereby convey the impression that “Scripture is nothing more than factual expressions.” But to say “all Scripture is inerrant” is to affirm that it is without error, and this negation of untruthfulness covers all of the Bible indiscriminately.

These and similar discussions of inerrancy may seem like nitpicking to some conservatives, while many liberals infer from such discussions that the term itself is useless if it requires so much “careful definition and discussion,” as your question puts it. But the obvious riposte is that once a word or concept is challenged, there is no important term that does not require “careful definition and discussion.” God? Love? Justification? Truth? Spiritual? Trinity? Messiah? Inerrancy is no different. Like the other words, and countless more like them, it can serve as a useful one-word summary, even while it needs unpacking with care and with great attention to what Scripture says.

Does the Chicago Statement on Biblical Inerrancy (1978) need updating for today?

The Chicago Statement remains a useful and helpful guide. Nevertheless, some new questions have arisen, and some old ones have surfaced in new contexts. Moreover, a formal statement, despite its lengthy affirmations and denials, doesn’t engage all the questions swirling around it, but rather stakes out a position. The position itself may still be defensible, but the discussion is ongoing. Our book addresses questions both old and new. 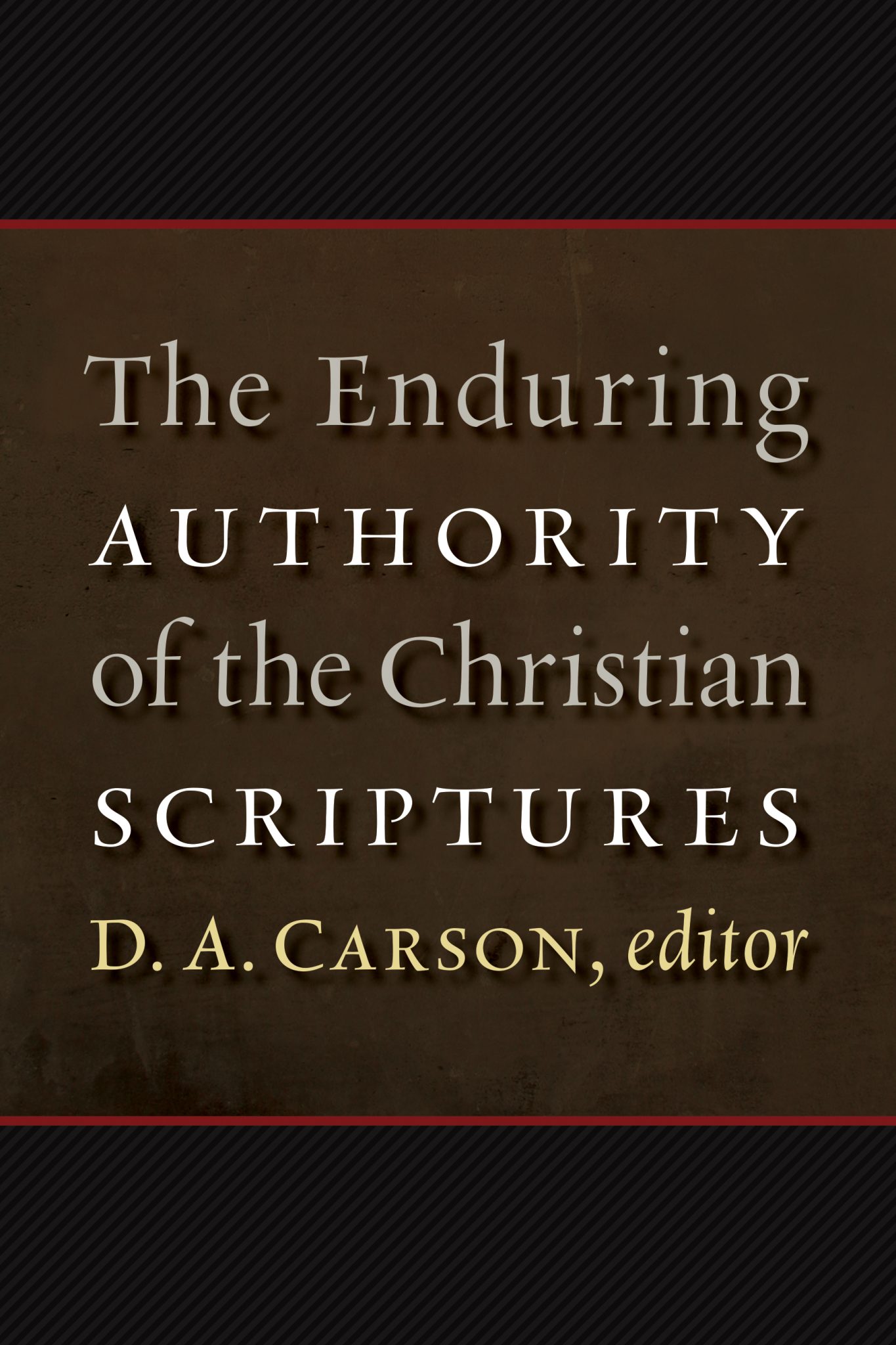 The Enduring Authority of the Christian Scriptures

The Enduring Authority of the Christian Scriptures

In this volume thirty-seven first-rate evangelical scholars present a thorough study of biblical authority and a full range of issues connected to it.

Recognizing that Scripture and its authority are now being both challenged and defended with renewed vigor, editor D. A. Carson assigned the topics that these select scholars address in the book.

This comprehensive volume by a team of recognized experts will be the go-to reference on the nature and authority of the Bible for years to come.

How can the average Christian have confidence in the meaning of God’s Word when two godly New Testament scholars hold to inerrancy, study the text their entire lives with the best tools available, and still disagree on the meaning of a passage?

At least two issues stand behind this question: (a) Isn’t the truthfulness of Scripture jeopardized if two equally devout and learned Christians cannot agree on the truth Scripture is articulating? (b) More broadly, how is this problem related to the old doctrine of claritas Scripturae, the clarity of Scripture?

On the first point, the only way to imagine how God might have arranged things so all interpretations agreed with one another is by hypothesizing that he might have performed an endless sequence of revelatory miracles in the minds of every interpreter, so that they could not get things wrong. Transparently, God has not done this, nor has he promised to do so. What he has done is given us a truthful and reliable revelation and made us responsible for trying to understand it aright, even as we feel our limitations and need for grace. Ideally, differences of opinion shouldn’t drive us to the conclusion that the revelation isn’t true, but rather to a profound recognition of our limitations, of our need for grace and for the Spirit’s help, of a form of theological argumentation that’s strong but also respectful—one that recognizes the truth matters but tries to keep the interpreter’s ego out of the matter.

As for the second point—the clarity of Scripture—perhaps I could refer to the excellent essay by Mark Thompson in the book (ch. 20, “The Generous Gift of a Gracious Father: Toward a Theological Account of the Clarity of Scripture”).

While you underscore the importance of considering inerrancy, you admit the exercise is in “at least some danger of serving as a distraction.” How so?

Just as it’s possible to ignore what Scripture says about its own truthfulness, it’s possible to so focus on internecine debates about inerrancy that one forgets to promulgate the gospel, forgets to walk in humility before God in his holiness, forgets to love brothers and sisters in Christ as Christ has loved us. God still says he favors, not those who defend inerrancy, but those who are humble and contrite in spirit and who tremble at his word (Isa. 66:2)—though we must immediately add that if one approaches God with such contrition, humility, and reverent fear before his word, he or she is far more likely to think of the doctrine of inerrancy as something easy to believe.

You argue inerrancy must be “a place to live,” not just a position to hold. What do you mean?

John Frame’s lovely expression is wonderfully articulated in his Evangelical Theological Society plenary address a couple of years ago. Inerrancy is not an isolated belief that one can carve off or tack on to an otherwise robust Christian faith.

Inerrancy is not an isolated belief that one can carve off or tack on to an otherwise robust Christian faith.

Rightly articulated and worked out in our lives, it shapes how we think about God, it forms a huge part of our epistemological structures, it determines where we go to hear the voice of God, it calls us back to the gospel and its promises both for this life and for the life to come, it establishes common ground with believers in other cultures and other centuries, it impels us to worship—in short, it is “a place to live.”