“What Would Jesus Do?” is a slogan young Reformed types love to hate. But what if it’s a question more of us should be asking?

Gospel-centered-everything is quickly becoming a popular refrain among younger and not-so-younger evangelicals. In part this is a reaction to the perceived moralism of the previous generation, whether the hardline fundamentalist variety or its squishier evangelical cousin. Two prominent threads in this fabric are gospel-centered holiness and gospel-centered preaching, the latter fueling the former.

Of course, with any reaction comes the peril of overreaction. As C. S. Lewis quipped, “For my own part I hate and distrust reactions not only in religion but in everything. Luther surely spoke very good sense when he compared humanity to a drunkard who, after falling off his horse on the right, falls off it next time on the left” (Fern-Seed and Elephants, 66).

In Imitating God in Christ: Recapturing a Biblical Pattern, Jason Hood identifies the concept of imitation as a significant casualty in the gospel-centered counteroffensive against moralism. Should preachers exhort us to imitate biblical examples? Only if we want more “Dare to Be a Daniel” garbage. Should we talk about imitating Jesus? Only if we want to reduce the gospel to moralism or trendy activism. Should we play up the role of godly examples in the church? Only if we care more about copying behaviors than transforming hearts.

In this new book, Hood, soon-to-be pastor of an international Anglican church in Tanzania, wisely pegs these stances as overreactions. And he seeks to rehabilitate the concept of imitation—imitating God in Christ, and imitating God’s people—in theology and church life.

Reaction to Reactionaries That Doesn’t Overreact

Much to his credit, in reacting to reactionary overreactions, Hood does not overreact. In part, this is because he aims simultaneously at three audiences (see the introduction, ch. 14, and conclusion): First, the “latitudinal left” likes the idea of imitating Jesus, but doesn’t like the gospel’s ethical and theological sharp edges. Second, the “muddled middle” embraces the idea of imitating Jesus and the saints at a popular level, but without a robust theological foundation risk slipping into lowest-common-denominator moralism. And finally, the “reluctant [read: Reformed] right” insists so strongly on the priority of grace that ethical imitation can feel like a foreign or even hostile element.

Hood’s words to each group are nuanced and gracious, yet incisive. Readers on the Reformed right, I think, will be especially challenged to consider whether any babies have gone missing since we threw out the moralistic bathwater.

Another reason Hood avoids overreacting is that the book functions mainly as a biblical theology of imitation—and a good one at that. He begins by showing that being made in the image of God necessarily entails that we imitate him (chapter 1). We’re meant to rule as he rules and, as priests, to be holy as he is holy (chapters 2–3). In this vein Hood cites Greg Beale’s powerful axiom: “We resemble what we revere, either for ruin or restoration” (44). 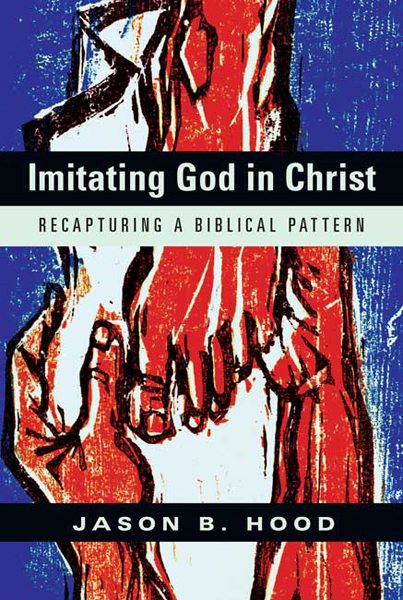 In chapter 4, Hood rehabilitates the idea that God doesn’t just work on us or in us but also through us. Next, Hood explores Jesus’ role as God’s perfect image (chapter 5), the Gospels’ call to imitate Christ as a central feature of discipleship (chapters. 6–7), the role the resurrection and the Holy Spirit play in fueling our imitation of Christ (chapters. 8–9), and Paul and the other New Testament authors’ insistence that Christians must imitate Christ’s character and cross (chapters 10–11; cf. 1 Pet. 18–25).

Chapter 12 argues, “If humans are to imitate God, they are also to emulate those who reflect his character”—and this imitation should pervade the lives of local churches. Chapter 13 considers the hermeneutical foundations of imitation, exploring several presuppositions at work in the biblical writers’ own interpretation of Scripture.

The book closes with application to the three audiences (chapter 14), a history of imitation (chapter15), and a conclusion that synthesizes instruction on imitation from John’s epistles.

Want Flourishing Disciples? Beef Up Your Theology of Imitation

Hood covers lots of ground in little room, so he often skims quickly over deep waters. If you like reading biblical theology, much of the book will feel familiar. Yet Hood’s concise writing and careful exegesis make the book a valuable refresher course in some of the main themes of Scripture. (For a similar, if brief, take on imitation applied specifically to ecclesiology, see chapter 3 of What Is a Healthy Church?)

Jump to chapter 13 to 15 if you wish to skip straight to the “So what?” I especially appreciated Hood’s handling of contemporary objections to exemplary preaching (175ff). If you’ve wrestled with whether “Christ-centered” preaching rules out an ethical appeal to examples in Scripture, you must read this section. For instance, on David and Goliath, Hood endorses the “Christ typology in David’s work as a messianic conqueror,” while likewise affirming, “Believers should learn from David’s confidence in God and God’s victory and the way in which that confidence enabled him to act when all around him were paralyzed” (179).

Further, Hood’s more detailed critique of anti-imitation sentiments in “Reformation Nation” in chapter 14 is measured and spot-on. If your love for the indicative leaves you at all uneasy with imperatives, Hood’s work in this chapter and throughout the book provides a balanced, biblical corrective.

In fact, Hood argues God has built imitation into our very nature: “Few of us try sushi, social media, or facial hairstyles unless we are introduced to them by a flesh-and-blood model. Humans do not learn to speak, read, write, tie shoes, or perform a vocation without steady doses of imitation” (190). This is all the more true in the Christian’s discipleship to Jesus. Discipleship works by instruction and imitation, teaching and training. For more on discipleship as imitation and instruction, see chapter 10 of Jonathan Leeman’s Reverberation.

Yes, indicative before imperative—but may we never forget the imperative intrinsically follows the indicative.

If you want a culture of discipleship to take root and flourish in your church, beef up your theology of imitation. A biblical theology of imitation upholds for us not only the reality that the imperative does indeed follow the indicative, but also something of the how. And Imitating God in Christ will send you in the right direction along both those lines.

Bobby Jamieson is an associate pastor of Capitol Hill Baptist Church in Washington, D.C. He is the author, most recently, of Jesus’ Death and Heavenly Offering in Hebrews (Cambridge University Press).