When asked what form of government the Constitutional Convention had established for America, Benjamin Franklin famously replied: “A republic . . . if you can keep it.” Eric Metaxas—popular author, host of The Eric Metaxas Show, and founder and host of Socrates in the City—draws on that response for the title and theme of his tribute to America, If You Can Keep It: The Forgotten Promise of American Liberty.

This work is clearly a labor of love for Metaxas; he loves America and what he believes it stands for. If You Can Keep It is filled with stirring anecdotes, personal memories, and keen observations. But it’s also filled with warnings to Americans and expressions of concern for the country’s future.

Metaxas wants readers to understand that Americans have a duty to keep the “promise” of America, and that we need public as well as private morality and virtue in order to “keep” the republic.

There’s a lot to like in If You Can Keep It. Metaxas is an excellent and effective writer. He knows how to tap into the emotional well of his readers, and his popular style sprinkled with affecting quotes and stories is accessible. His many patriotic references and examples will appeal to most of those in his target audience, as will his thesis that the United States is the greatest nation, that its exceptionalism must be maintained, and that public religion must play a role. I came to the book sympathetic to his thesis, but I doubt an informed neutral reader would be persuaded.

Much of the problem lies in what makes Metaxas popular. His accessible style carries seeds of destruction in terms of making a valid argument. There are seven endnotes in the entire book—and they’re annotations of further information, not source citations. The lack of endnotes makes reading more fluid and uninterrupted, but it sacrifices accountability to reliable sources and facts.

One of the more egregious historical errors is the claim that the “very first settlers on American shores” came “precisely” to gain religious freedom, along with the equally false claim that “in America the idea of religious freedom was paramount,” and that there was “a complete tolerance of all denominations and religions” from the beginning (34–35).

The first settlers to the American shores (that would become the United States) settled at Jamestown in 1607 and came seeking profits, not prophets. Like many on the Christian Right, Metaxas skips Jamestown altogether. He says: “Since the Pilgrims came to our shores in 1620, religious freedom and religious tolerance have been the single most important principle of American life” (70). The Pilgrims and Puritans did come seeking religious freedom, but only for themselves. They didn’t value or allow religious freedom for others. 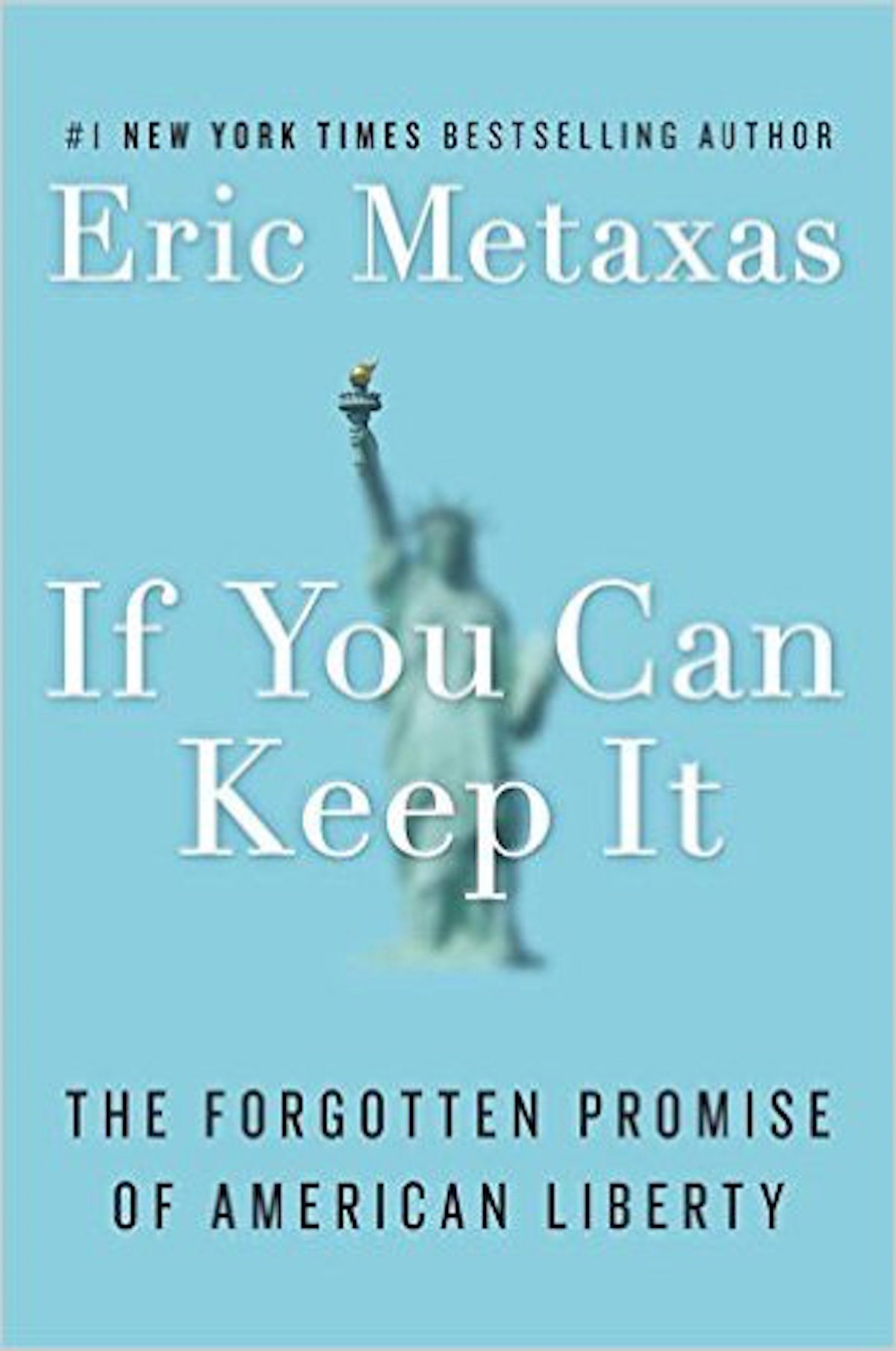 If You Can Keep It: The Forgotten Promise of American Liberty

If You Can Keep It: The Forgotten Promise of American Liberty

In fact, the Rhode Island colony was founded by dissidents forced out of Massachusetts Bay because of religious nonconformity. Far from guaranteeing “complete tolerance,” all the way through the Founding era non-Christian religious groups and some Christian denominations were discriminated against in most of the colonies/states, and even persecuted in some. That persecution was, for example, what motivated James Madison and Thomas Jefferson to push for religious tolerance legislation.

Metaxas seems to make the common error of determining religious belief by denominational affiliation. He declares John Adams to have been “a committed and theologically orthodox Christian” (56). But Adams vehemently rejected the deity of Christ, the atonement, the Trinity, and eternal punishment in hell. Adams said that placing all religion “in grace, and its offspring, faith” is “anti-Christianity.” He believed the best source for “orthodox” theology was the Hindu Shastra, that philosophy was at least equivalent in authority to the Bible, and that pagans who became “virtuous” went to heaven. Adams outrageously said he wouldn’t believe in the Trinity even if God himself told him on Mt. Sinai that it was true.

Having decided that Plymouth was the first colony, Metaxas (like many on the Christian Right) proceeds as if the Pilgrims and Puritans founded America rather than simply Massachusetts (189). It’s worth mentioning that roughly 150 years passed between Plymouth and the founding of the United States. He proceeds as if John Winthrop’s “city on a hill” pronouncement was meant for—and applies to—all of America for all time and not simply to the colony the Puritans were establishing in pursuit of God’s will (234). It’s important to note that seven of the twelve other colonies were not founded for religious reasons. As for the success of Winthrop’s “city on a hill” vision, Metaxas claims the Puritans’ “distinctly biblical model carried on beyond the Massachusetts Bay Colony and into the United States of America (215).” In fact, before the 17th century ended, the descendants of the original Puritan settlers were heavily engaged in the slave trade and making rum. Similarly, because he approves of its guarantee of religious freedom, Metaxas claims that the charter of Rhode Island speaks for all of America (72). This is particularly ironic since the Rhode Island colony was founded by castoffs seeking the religious freedom denied them by the Puritans.

In addition to factual errors, Metaxas engages in some unhelpful hyperbole, such as his claims that without George Whitefield “the United States simply could not have come into being” (77) and that America’s founders required and expected all Americans to be active and engaged and that they believed that America would soon fail if all were not fully committed to the cause (3–4). There are also theological problems, such as Metaxas’s questionable treatment of Matthew 5:14 and Luke 10:27, and his persistent claim that America was “called by God” for a special mission to the world (193, 212–16).

As I tried to emphasize at the beginning, there are a number of good elements in If You Can Keep It. Metaxas has good things to say about American exceptionalism, the character and example of George Washington, the importance of heroes, the need for morality and religion in public life, and the value of civic education.

I still agree with his thesis, but I cannot help thinking that it deserves a much more accurate presentation.

5 No, ‘Saul the Persecutor’ Did Not Become ‘Paul the Apostle’